Acqua di Parma, in collaboration with La DoubleJ, have dressed an entire beachfront with the new Blu Mediterraneo by La DoubleJ capsule collection for a summer of pure Italian style… 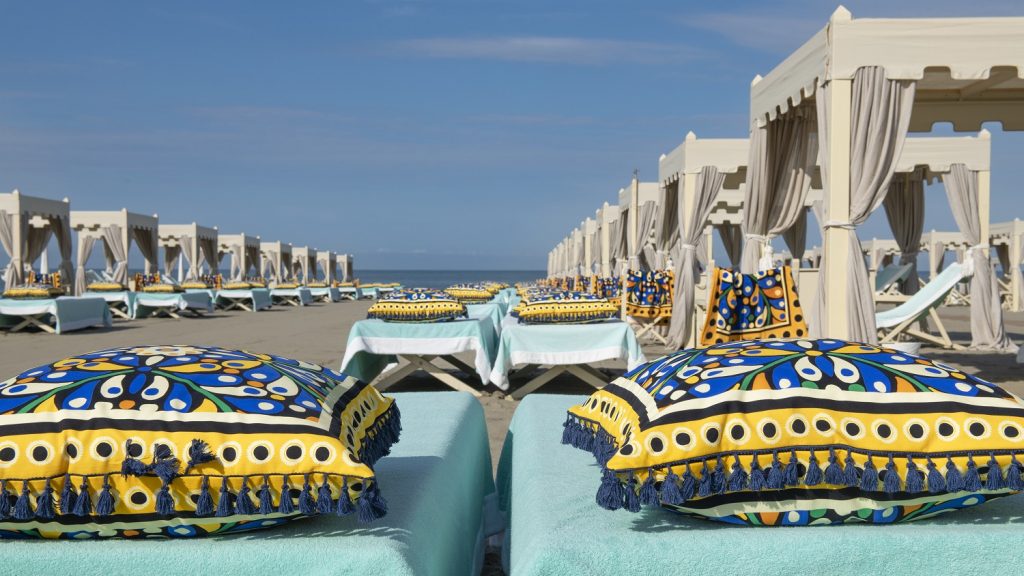 At PSHQ we’re literally salivating over these pictures of the Bocelli family’s bathing establishment, because although we may not be able to wiggle our toes in the sand and gawp at the azure waters, this stunning collab allows us to travel in spirit via the radiant fragrances and vibrant colours of the new capsule collection. 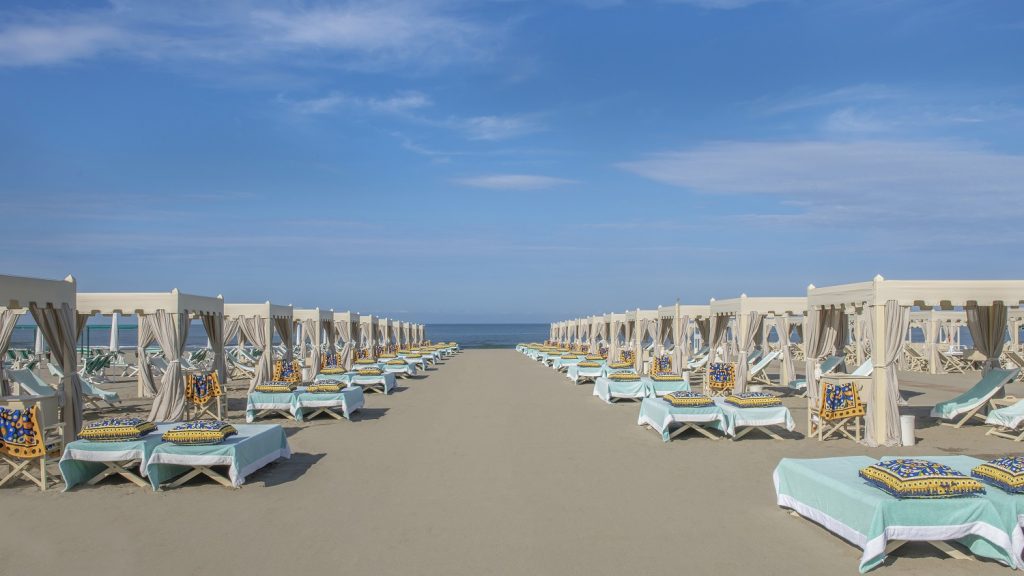 In the utterly stunning location of Alpemare Beach Club, Forte dei Marmi in Tuscany (which looks like it should be the set of a Wes Anderson film, don’t you think?) for the first time ever, Acqua di Parma have dressed the beachfront for the entire Summer season! And now, you can dress your home to transport you to the Med every time you see those so-happy pops of colour or catch a waft of the glorious scents. 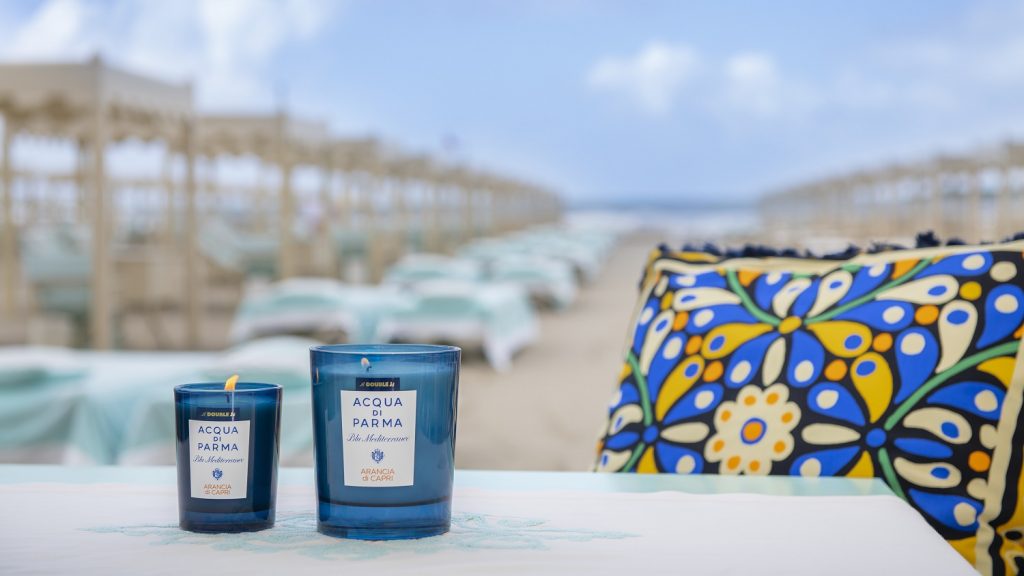 Comprising fabulously luxurious body products such as the Shower Mousse (£37 for 150ml), lightly scented with the lemon, myrtle, jasmine and salty marine breeze notes of Mirto di Panarea, a Body Scrub (£50 for 200ml) fragranced with their Fico di Amalfi grapefruit, bergamot, lemon and fig (which is basically like sexy marmalade), and even a range of Travel Accessories (we have our eyes on the Confetti Blue Beach Towel, £255 – would it be a bit extra to say we dream of spritzing this with one of the Blu Mediterraneo collection (from £49) and ‘travelling’ with our noses as we sit in our back gardens?) we’re spoiled for choice! 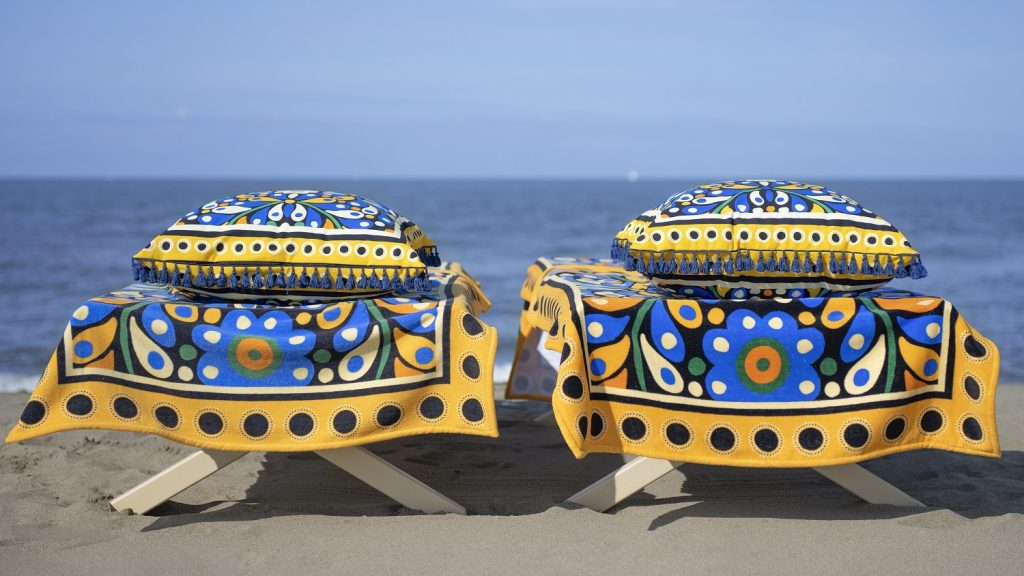 We say: if you can’t be there in person, let perfume whisk you there right now. So spritz that sunshine-filled fragrance and light that candle, because the beach will wait until you can get there again, but your mood can be lifted in mere seconds by the magic of summer scents…

Take your front row seat and get ready to smell-along with our very own Suzy Nightingale and Carson Parkin-Fairley in our #FROW Discovery Box unboxing extravaganza!

In this fashion-forward box, timed to launch alongside our Couture edition of The Scented Letter Magazine, we explore each fragrance in-depth, and there are so many samples in the box – THIRTEEN fragrances in all – that we had to split the video into three parts.

STOP PRESS! If you purchase a box before 25th October 2019 you’ll be entered to win a full size fragrance from the box! 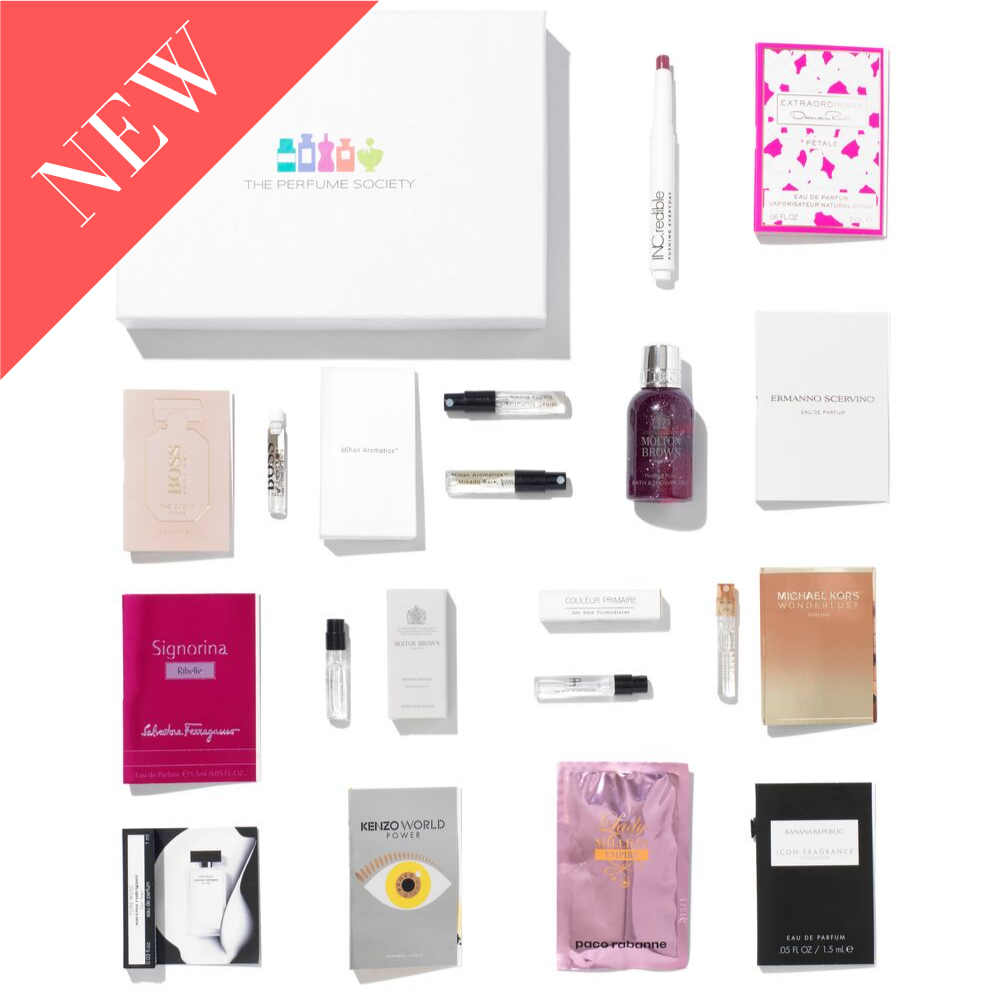 Here’s what you get in the box:

Which will you fall for first, we wonder? Watch below to see which made us gasp, and grab your very own #FROW Discovery Box for only £19 (£15 for VIP Club members) + P&P.

There are few fragrance houses still as relevant after almost 200 years as the wonderful Paris-based house of E. Coudray – which can trace its roots back to the reign of Louis XVIII, no less, and the year 1822.

The Paris-born founder was a doctor-chemist, Edmond Coudray (the ‘E’ in E. Coudray), who went on to enjoy a spectacular career, creating eaux de Cologne, pomades, creams and soaps for the crowned heads of France, Italy and England – including Queen Victoria, for whom the perfume ‘Reine Victoria’ was made.

Others gloried in names like ‘Gants Poudrés’ (powdered gloves), and ‘Rêve de Reine’ (the Queen’s dream). And in 1829 he also wrote a book, charmingly titled L’Art d’Être Belle (‘The Art of Being Beautiful’).

You can read more about their fascinating history in our page dedicated to E. Coudray and their regal begininnings, but for now let’s get our noses into why, exactly, they remain so popular today… 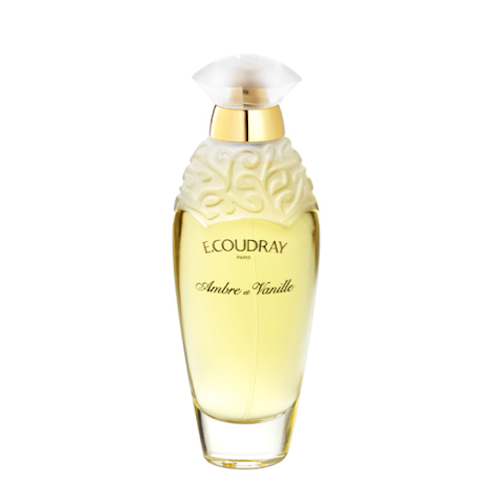 ‘A creamy and refined ambrée fragrance, the scent of Ambre et Vanille was created in 1935 and has remained one of the most beloved and enduring of E. Coudray’s compositions. Moving from an opening of complex citrus aromas into a gorgeous floral bouquet with delicate spice notes, the eponymous amber and vanilla subtly colour the fragrance throughout, adding an enticing gourmand quality to the scent.’ 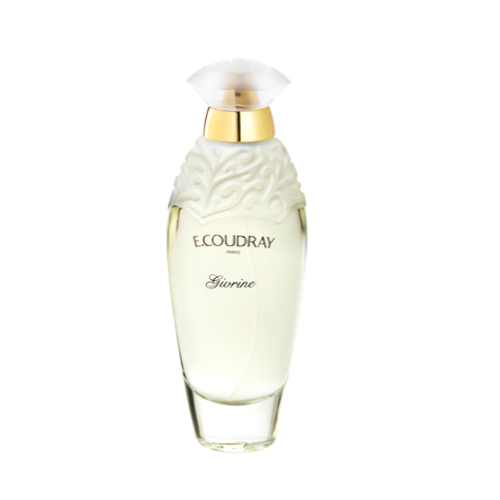 ‘A gorgeous floral fragrance originally released in 1950 to great acclaim, Givrine has been updated for modern tastes by the highly regarded nose, Evelyne Boulanger. After a delicate citrus opening, complex floral accords shine through for a cosy, inviting aroma. Light and ephemeral, the scent is an image of grace and poise.’ 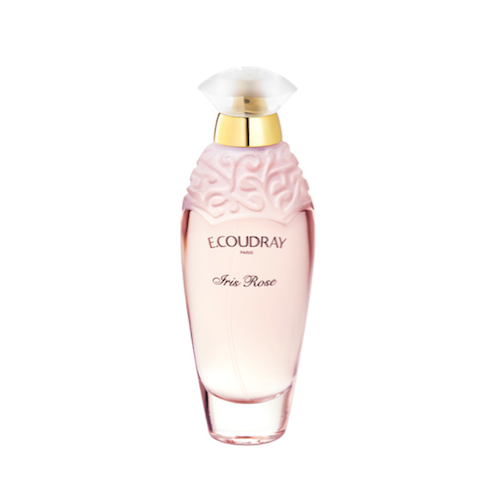 ‘Created by perfumer Randa Hammami, Iris Rose is a rich composition redolent of the classic floral scents that have for so long typified our expectations of elegance. Building from a sumptuous base of vanilla, patchouli and white musk, the fragrance opens up into a beautiful patina of subtle rose aromas, the top notes serving to lightly floriate the base notes rather than overpower them. The cumulative effect is light and breezy, yet firmly grounded, an ideal fragrance for a spring day or summer evening.’ 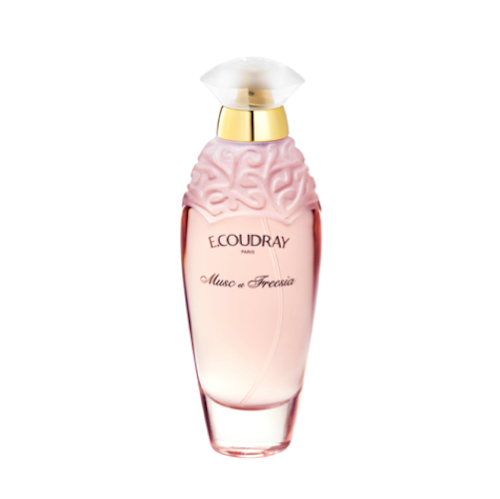 ‘Created by prolific nose Christophe Raynaud, Musc et Freesia is a sparkling and bubbly floral composition with surprising hints of fruity green accords. With delicate raspberry leaf in the top notes, and a sumptuous bouquet of peony, cyclamen, lily and freesia in the heart, Musc et Freesia is a luxurious and delicately balanced scent that brings out the best qualities of its constituent components.’ 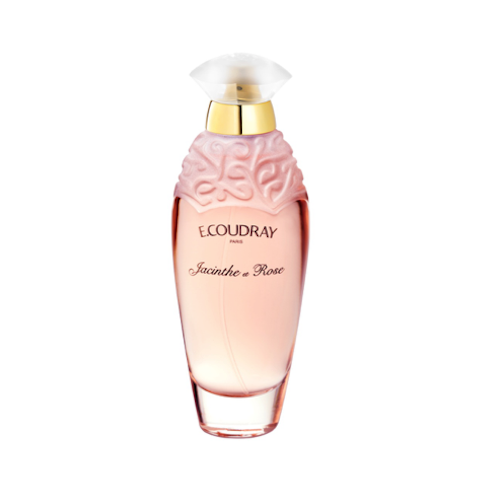 ‘Launched in 1983, Jacinthe et Rose is one of the modern icons within the current E. Coudray range. Developed by Evelyne Boulanger, Jacinthe et Rose is a floral composition of exquisite nuance. The lush aroma of peach gives the scent a full-bodied quality, while sparkling top notes of vodka and bitter orange serve as an intriguing counterbalance to the sumptuous scent.’

Buy them at Roullier White

There several more to tempt your fancy, including the fabulously opulent (and very boudoir-esque) body oils and sumptuously rich bocy creams – all in beautiful packaging that just begs to be displayed. And with their characterful yet never overwhelming scents, E. Coudray offer the most charming selection of fragrant offerings that are perfect to wear in our currently sweltering climate…

Aesop have fragrance at their heart, but always linked to the efficacy and wellbeing benefits of their produtcs. Never a brand to slap a nice smelling scent in for the sake of it, they’ve now launched a trio of home fragrances created by perfumer, Barnabé Fillion, with the premise that Istros, Cythera and Olous will ‘…transform the home, redefining the physical space that surrounds us.’
Each of the room sprays has been commissioned with a bespoke musical track composed to evoke the notes of the scents themselves, and with such a connection between music and perfume – we speak of musical and fragrance ‘accords’, the ‘notes’ of a scent, a perfumer arranging their ingredients on an ‘organ’ – it’s an harmonious match, indeed.

Aesop say: ‘Just as each Aromatique Room Spray unfurls in a melody of top, heart and base notes, composer and musician Jesse Paris Smith has created three distinctive tracks to narrate the shifting journey.’
Istros
A union of enlivening florals and smoky tobacco, underscored by the embrace of sandalwood.
Istros is a scent of what has been left behind: a street baked by heat during the day, cooled at night; tendrils of tobacco smoke long dispersed; bazaars that bear the etchings of commerce, commotion and carnival. But more than this, it is a communion with the creative spirits who have journeyed through – an energy distilled from their traces.
Cythera
A veil of geranium and incense, lent symmetry by woody patchouli and the warmth of myrrh.
Cythera conjures a moonlit garden as vespertine flowers relax their petals and nocturnal animals emerge from sleep. Drawing us into the present, an atmosphere of reverence is stirred as darkness returns. The air in this space holds a delicate aroma woven with the memory of the day, and the promise of the evening ahead.
Olus
A blend of citrus botanicals, balanced by breaking waves of cedar and the refreshing spice of cardamom.
Just as words are born of our breath, Olous rouses an exhalation of clipped, green aroma. Boundless as it is, nature makes its presence felt inside the home – stillness ensues. The environment is redefined to an elemental time, when life was all silence – pleasantly devoid of the babble of phone chatter, or the burring hum of the mechanical.
You can listen to the soundtracks on the Aesop website, and we highly recommend taking a few minutes to sit down, spritz and chill to the scents…

Jet-setters chasing the sun in Miami – and those lucky enough to live there – can now revel in the luxurious surroundings of Acqua di Parma’s newely opened boutique. Designed to evoke the spacious elegance of a stylish Italian home, the 1,000 square foot space boasts a sleekly luxurious interior outfitted with the brand’s signature style – Calacatta marble contrasts with dark Wenge wood to highlight the famous Acqua di Parma yellow of the walls. At the heart of the store, a huge leather-covered pyramid showcases bottles of the brand’s most famous and timeless Colonia fragrances.

Fans of the brand need not confine themselves to trying the Colognes and body products, as the much-ancipated barbershop provides gentlemen with original barber’s chairs in a devoted area that evokes all the traditional charm of a classical Italian barbershop, of course finished with the flawless contemporary touches for which the brand are known. Shaving and skincare products from their Collezione Barbiere have been created to accompany each phase of this ritual performed – you will be glad to hear – by an expert barber for a truly hands-on Acqua di Parma experience.
Located in the prestigious Brickell City Centre – right in the heart of Miami and one of the city’s most desirable zipcodes – it’s sure to become a must-visit for fragrance fanatics and style-seekers. And of course Acqua di Parma offer the perfect cooling scents to spritz if the temperature gets too steamy.

‘We selected Miami as our first city due to its international recognition in art, design and culture which are values that define the essence of Acqua di Parma,’ explained Giovanni Lepori, President North America. ‘With events such as Art Basel and Design Miami we knew this was a city we wanted to be a part of.’
We rather see ourselves wafting about in a silk maxi dress while wearing their Arancia di Capri – an aromatically uplifting blend of orange, mandarin, and lemon essential oils with the sparkle of petit grain infused by cardamon and resting on a base of sweetly smooth musk. In fact, yes, book us the plane tickets now, please! 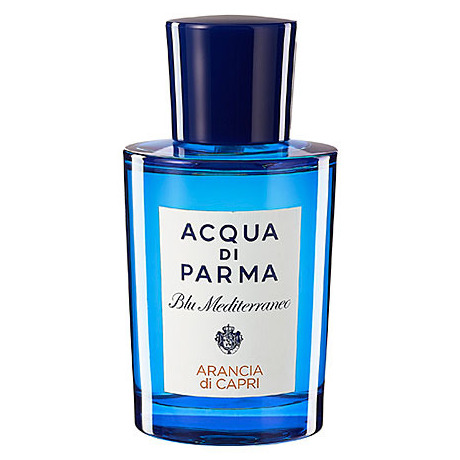 Category: News
Tags: America, USA, US, style, opening, Miami, launched, boutique, cologne, Acqua di Parma, store, design, shopping, luxury, new, perfume
RECENT POSTS
CHECK OUT:
LATEST FROM OUR SHOP
Follow By entering your email address you agree our blog partner (BlogLovin) sending you emails with our latest blog. You can always unsubscribe. We do not pass your information to anyone else. See our privacy policy.