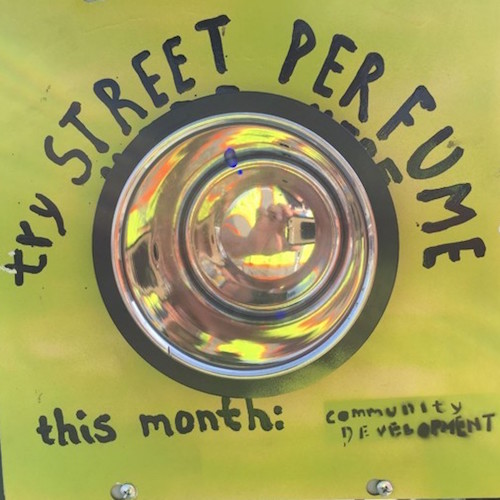 Commuters waiting for their ride at Los Angeles Mar Vista bus stop are being presented with a mysterious chrome cylinder, the inside glowing blue, and a sign that reads: ‘Try Street Perfume’…
Those brave enough to stick their hands inside get a spritz of a surprising scent created by Alan Nakagawa, in his tenure as Creative Catalyst Artist-in-Residence at the L.A Department of Transportation. But don’t be expecting something along the lines of Chanel No. 5 or Shalimar, for as Nakagawa admits, ‘They weren’t really designed for anybody to wear. They were designed to evoke conversation at a bus stop.’
And quite how that conversation might go is anyone’s guess, as the scents are all ultra-locally inspired,
Working with the agency’s Vision Zero team for a year, Nakagawa’s mission is to reimagine how people perceive the streets around them. Having already made art-filled zines and road-sign haikus, he was also ‘…obsessed with experimenting with something to titillate the nose.’
Anyone travelling to L.A in the next few weeks? Here are three of the weekly-rotating ‘Street Perfume’ scents you could try, if you dare… 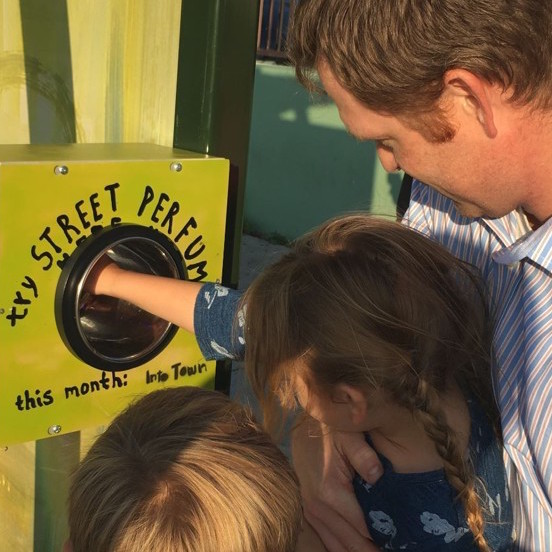 Into Town: ‘It’s a plant, indigenous to the area, called California sagebrush. Back in the day when the caballeros were working really hard, and then they had a break, they would rub this plant all over their bodies because, you know, they wouldn’t bathe or anything,’ Nakagawa explains. ‘Then they would ride into town and do whatever partying they were going to do. I like the idea of this early form of perfume that the cowboys used in California that happened to smell good enough it would at least neutralize their stench.’
Economic Development: ‘There are a lot of things going on in Los Angeles, a lot of changes. Some call it gentrification, some call it economic development. I wanted that to be more of a fun smell. So it’s kind of a lavenderish smell at first, kind of musky, and then it quickly changes into a coffee smell with cocoa and vanilla. Everyone who smells it always starts giggling, which is what I wanted to evoke. I wanted to make it playful, even though the discussion happening currently is very toxic.’
Hollywood Springtime: ‘This one is very autobiographical because I’ve always had this thing about the four seasons, having been born and raised in Los Angeles,’ says Nakagawa. ‘I’m only aware of the seasons through the movies or television. I didn’t really see snow until I was an adult, for instance, and I only experienced autumn and orange leaves in post-grad…. I guess maybe I felt cheated when I was a kid. ‘Hollywood Springtime’ is going back to that thing about music. It’s a smell that has no base note, so it’s easy to forget what it smells like. When you smell it it’s like, Oh, this is very nice, it’s very springtime and flowery, it has a sweetness and a wetness to it. But after an hour you probably won’t remember what it smelled like because it doesn’t have substance.’
The bus stop is located at Centinela Avenue and Venice Boulevard, where the perfumes will be available to try throughout August. With a counter logging roughly 500 ‘arm-pokes’ in to the machine thus far, we rather hope something similar will make its way to the UK… and we’d be first in line to try!
Written by Suzy Nightingale

Category: Slider
Tags: fragrance, street art, LA, L.A, Bus Stop, USA, America, news, art, scent, perfume, Street Perfumes
Recommended Posts
RECENT POSTS
CHECK OUT:
LATEST FROM OUR SHOP
Follow By entering your email address you agree our blog partner (BlogLovin) sending you emails with our latest blog. You can always unsubscribe. We do not pass your information to anyone else. See our privacy policy.