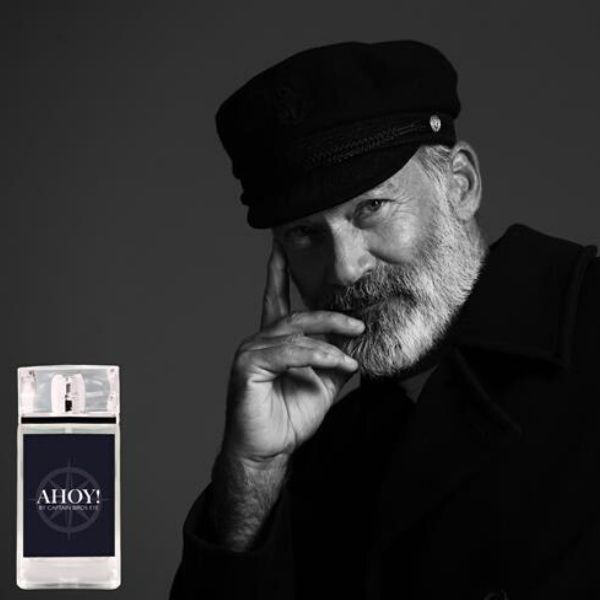 Did you know that many companies have created novelty fragrances to promote anything and everything from fast-food brands and Stilton cheese to Captain Birds Eye fish fingers? (Yes, really!)

Fragrance is such an individual choice, don’t you think? We all have completely differing reactions to certain notes or combinations – what’s one person’s yum is another’s yuck, and that can be based on anything from childhood memories and cultural or long-buried associations to the simple fact of personal preference. What’s more, there are scents that may remind us of favourite foods or sweet treats we enjoy – the Gourmand family of fragrances have held sway since the 90s.

It would take the concept of ‘niche’ to a whole new level, however, for fragrance fans to actively seek out scents that smell of fried chicken, pizzas and sprouts – no matter how much we might love munching them. Well… you’d think so, wouldn’t you? But increasingly, brands are latching on to the power of perfume to promote their products.

Have YOU tried any of these, or purchased one as a joke gift for a friend…? 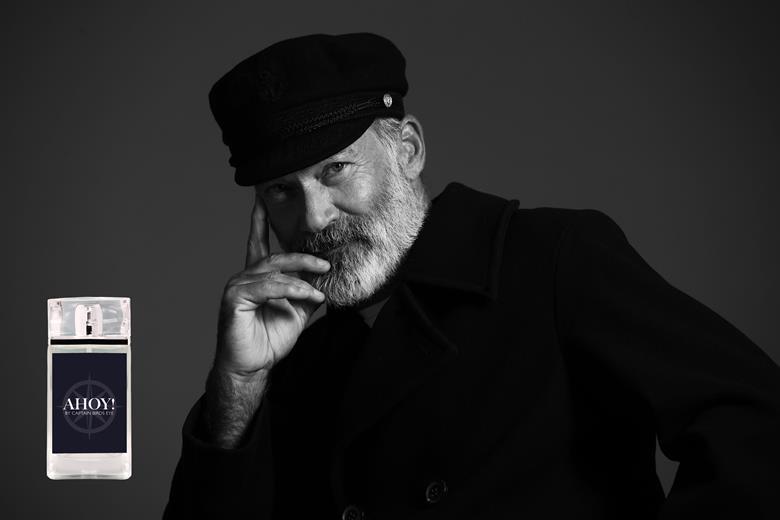 Birds Eye recently offered consumers the chance to win a limited edition eau de toilette inspired by Captain Birdseye himself – played by Italian-born actor and seafarer Riccardo Acerbi, who was unveiled at the start of 2018 as part of an £8m marketing campaign for the brand. ‘We know the British public have a soft spot for our captain,’ explained Birds Eye spokeswoman Annalisa Fanali, and so they gave him his own signature scent, ‘inspired by the hypnotic and evocative power of the high seas.’

Named Ahoy! the fragrance promises top notes of grapefruit and mandarin with patchouli, thankfully nothing fishy to smell here. Fifty bottles of the scent were up for grabs in the competition, which ran on Birds Eye’s Facebook page in the run-up to Christmas. If you weren’t a lucky winner, one imagines you wont be able to pop down the shops and pick yourself up a bottle in the immediate future, which is a shame because it sounded rather appealing. Unlike some of the previous novelty fragrances, below… 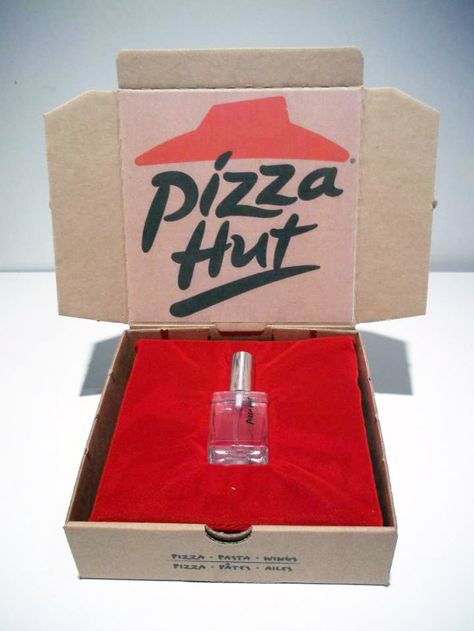 In 2012, having revolutionised the pizza world with stuffed crusts, the fragrance world was perhaps not ready for Pizza Hut Perfume. What began as a joke on their Facebook page escalated to an actual scent being created, which they temptingly described as ‘boasting top notes of freshly baked, hand-tossed dough.’ The limited edition perfume was designed to commemorate Pizza Hut Canada, and only 110 bottles were produced and shared with fans. ‘Will we be seeing Pizza Hut perfume in department stores any time soon?’ their press release asked. ‘Only time will tell.’ Spoilers: nope. 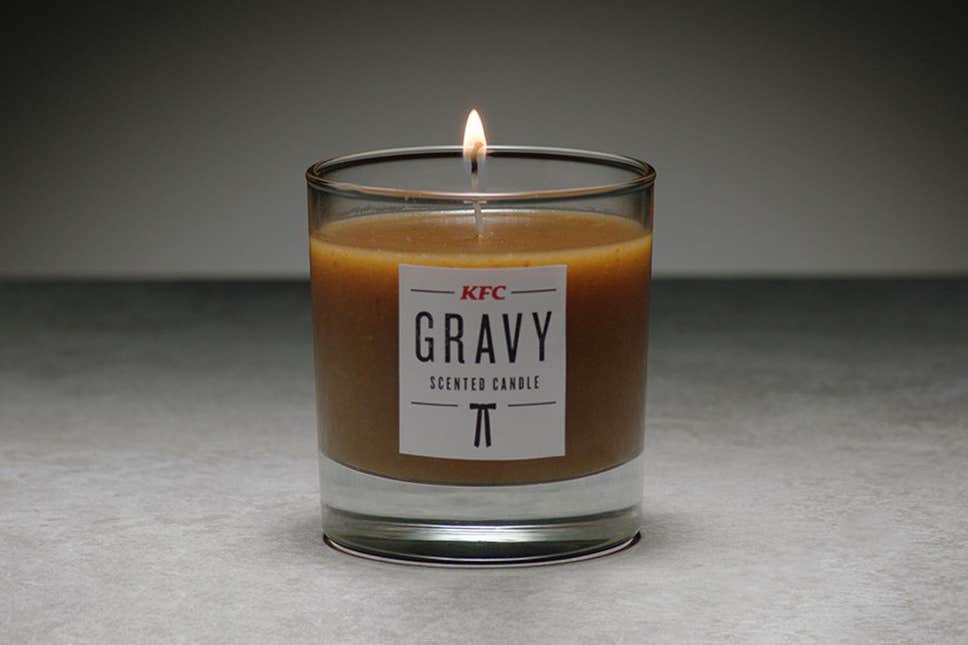 Currently showcasing their vegan-friendly range, those missing their whiff of something meatier were recently offered a unique opportunity to ‘fill your home with the scent of Gravy’ in a KFC Candle. Another limited edition (no, really?) candles were limited to only 230 editions and again, used as a competition prize on social media. We cannot comment on the authenticity of the gravy scent, sadly, but certainly the wax colour looks… somewhat disturbingly… realistic. 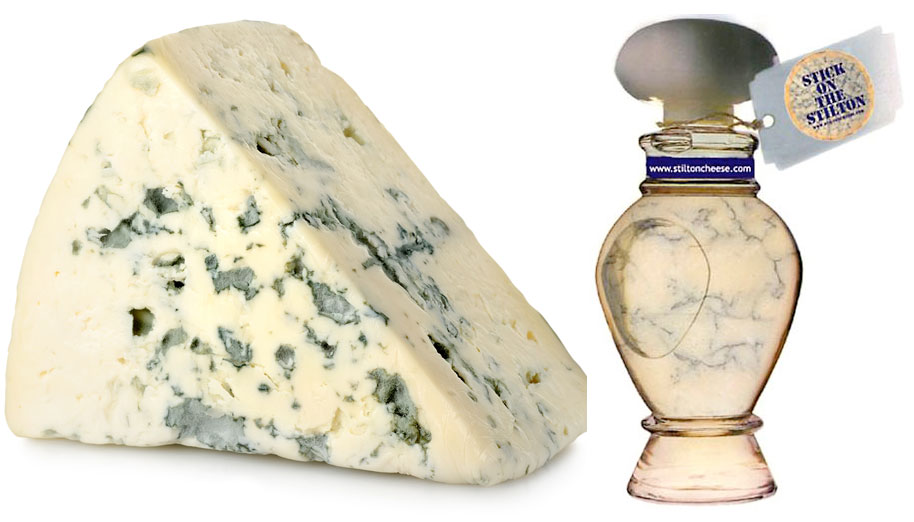 Now this will raise eyebrows (or twitch nostrils), but I don’t think this next one’s as crazy as it perhaps sounds. Eau de Stilton was launched to promote the cheese as part of a marketing campaign all the way back in 2006, and apart from genuinely loving the bottle design, while the sound of a blue cheese-inspired scent might seem off-putting, I think certain undiluted jasmine oils smell like strong cheese – due to the huge amounts of ‘indoles’ found in the aromatic molecules, which to some noses even smells sightly fecal. It goes to show, it depends how something is described before we actually smell it. I’d have given this one a go! 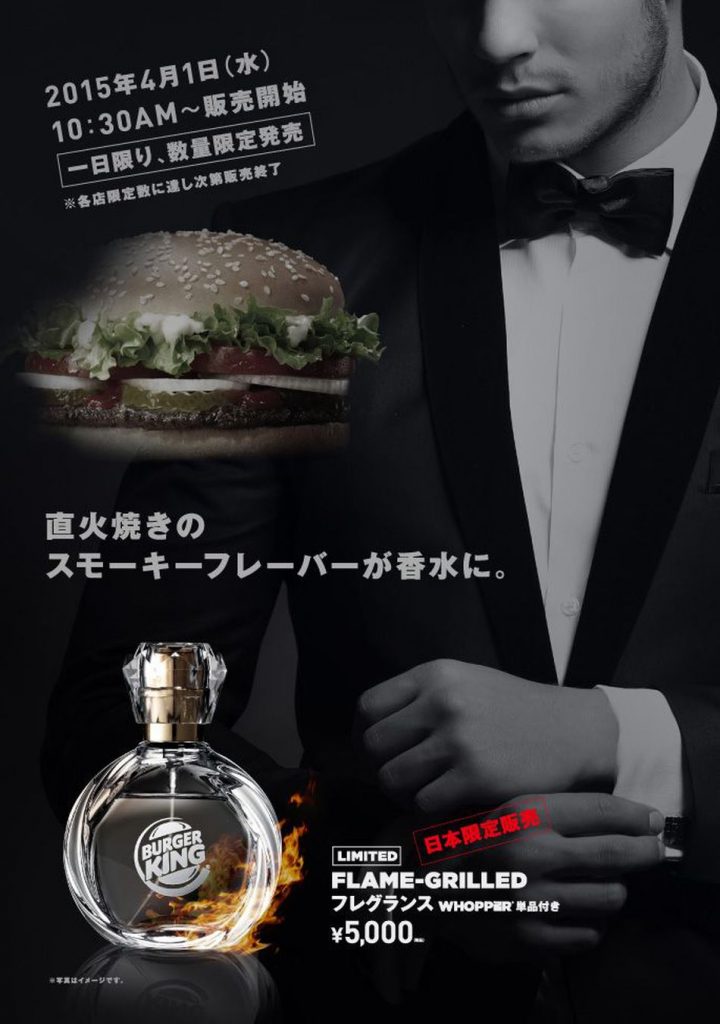 Those fast-food chains really love their fragrances, it seems, because in 2015 we saw Japan promoting a Whopper-scented Burger King Perfume. Alas only available for one day, reportedly, it’s another meaty scent I cannot report first hand (or nose) on, and I will have to try and get over the huge disappointment of that, somehow.

While the majority (if not all) of these are novelty items – released in strictly limited editions to create a media buzz around the brand – it’s an interesting concept that engages us in a different way, and the fragrances will still have been created by a perfumer working to a brief (albeit rather more bizarre than they are used to!) Of course those highlighted above are to be taken with a pinch of salt (and vinegar, as far as the captain’s concerned), but it will be fascinating to see if any other brands pick up on the perfume buzz and create their own ‘scent of’.

What would you like to see (and smell) next…?

Categories: Features, Slider, News
Tags: limited edition, fun, media, novelty fragrances, Captain Birdseye. Birds eye, Ahoy, marketing, new
Recommended Posts
RECENT POSTS
CHECK OUT:
LATEST FROM OUR SHOP
Follow By entering your email address you agree our blog partner (BlogLovin) sending you emails with our latest blog. You can always unsubscribe. We do not pass your information to anyone else. See our privacy policy.