There are many bloggers we admire at The Perfume Society, and occasionally, we like to feature some of our favourites to share with you here. Thomas Dunckley – a.k.a. The Candy Perfume Boy – is a longtime friend, award-winning writer and fellow contributor to The Scented Letter magazine. Along with a wealth of fragrance expertise he brings a completely refreshing and totally down-to-earth voice to the perfume world, offering his opinions and providing information in a way that’s not only accesible but makes us want to rush out and try all the things he’s mentioned.

And so, get ready to add to your ‘must sniff’ list, as we look back to the most interesting scent trends The Candy Perfume Boy saw in 2017. Which of these have you tried and loved, and which, we wonder, will continue to shape the face of fragrance throughout 2018…? 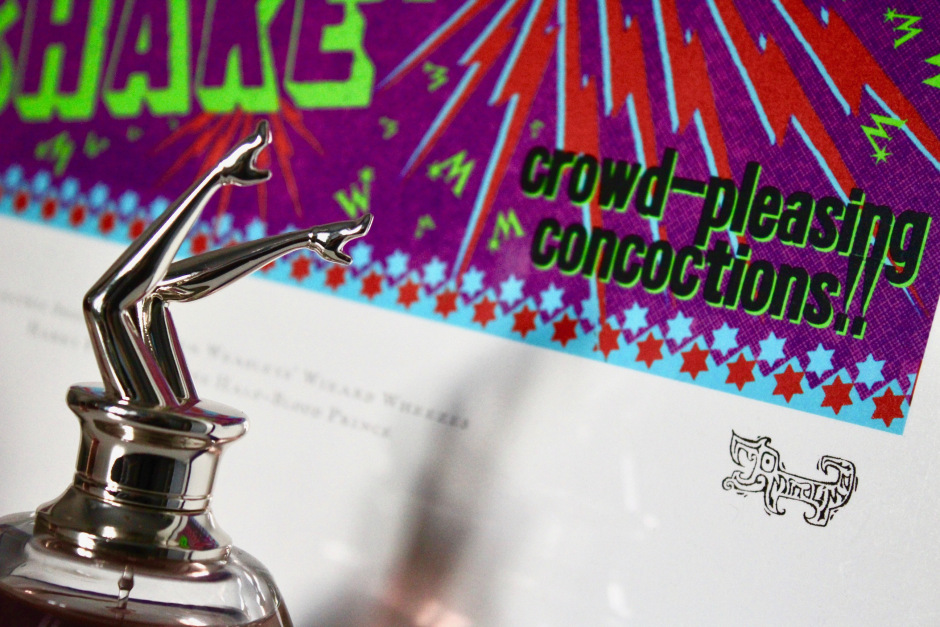 ‘We’re officially in quarter four of 2017 and what a year it has been. By my count there has been at least 20 million fragrance launches this year, but I do have a tendency to exaggerate. In truth it has felt like a particularly busy year, with lots of behemoth launches from equally gigantic brands. I also think it has been a phenomenally good year for perfume and I’ve fallen in love with more than a handful of wonderful fragrances already. But this post is not a retrospective of the year – you can have that at the annual Candies (my fragrance awards) in December, no this is something a little bit different.

As we’re heading towards the end of this year I thought it would be a good idea to do a quick recap of the big perfume trends we’ve seen this year. I’ve certainly noticed a handful of key themes over the last 12 months and it’s kind of fascinating to look back at them at this point in the year. So in this post you will find four trends that have populated the perfume landscape in 2017. These are just my thoughts however, and I’d be more than happy to hear about any trends you’ve identified too!

Let’s kick off by talking about sandalwoods because if there is any material I’ve seen lots of this year, it’s sandalwood. I’m used to the note being treated as a gateway to the exotic, with spicy, creamy and warm facets that lead one to think of ambrée opulence. This year however, there seems to be somewhat of a shift in the olfactory lexicon of the sandalwood, with a much more minimalistic approach that sees the more intimate, softer and fresher sides of the material showcased in all their glory.

Firstly let’s take a look at Molecule 04 and Escentric 04 by Escentric Molecules, both of which showcase the sandalwood material Javanol. In Escentric 04, the traditional fragrance composition of the pair (rather than Molecule 04 which is simply Javanol in alcohol) we see a fresh, almost metallic sandalwood paired with grapefruit and cannabis to create a sharper tone. It’s a wonderfully fresh take on a note that hasn’t really known freshness before.

This year Juliette Has a Gun created Sunny Side Up, a sunny, beachy fragrance that did not focus on aquatics or florals and instead showcased a rather sexy sandalwood note. The presentation of the note was intimate, nutty and creamy, with a salty skin-like vibe that brought out the sexier vibes of sandalwood. There was even a delightfully rosy take on sandalwood from Comme des Garçons in the form of Concrete, which felt plush yet dry and smooth at the same time.

So sandalwood definitely has been the note of the year and I hope we’ll see more intriguing takes on it in the year to come.

One trend that has really piqued my interest appears to be in its infancy. So far I’ve only noticed two fragrances that have done this, but I expect that we will see more over the next year. The trend is brands referring to their fragrances as ‘androgynous’ or ‘gender fluid’. Now, if you’ve been following this blog for a while you’ll know that I’m all for removing gender labels on scents, because anyone can wear anything that they want to. I’m also a pretty liberal guy and I’m very much in support of gender identities that are non-binary or otherwise. So I see this all as a very good thing.

With the rise in discourse around gender identity it seems that brands are cottoning on to this and are using these terms to replace the description of unisex. Katy Perry described her latest fragrance, INDI, as being “androgynous” as opposed to unisex and Guerlain launched Lui with mention of gender fluidity in the press release and a description of a scent that is “not entirely feminine, nor truly masculine”. I’m totally here for this and hope that maybe, just maybe, we’ll start to do away with gendered labels on fragrance entirely. Wishful thinking? Probably!

This trend technically started in 2016 with SJP Stash by Sarah Jessica Parker, but one scent does not a trend make – four however, do. A year or so ago there were numerous articles in the beauty press about how celebrity fragrances are dead and that consumers are no longer buying them. In that year next to no celebrities launched a new fragrance and with any kind of reality ‘star’ launching a scent, it really did feel as if we had reached ‘peak celebrity’ in terms of fragrance. Well now things are a little different and this year alone we have seen three celebrity launches that are far removed from the sickly sweet fruity florals that lead one reaching for the Gaviscon – these celebuscents are unique and actually rather good.

First off we have Shawn Mendes Signature from dreamy, put a poster of his face on your wall, singer/songwriter Shawn Mendes. Created for all of his fans, whether they be a boy or a girl, Shawn Mendes Signature is a well put together woody gourmand that feels as if it has been made with thought and links to the singer’s roots and personality. Then there’s Katy Perry’s INDI, an effortless woody musk that wears like a second skin, and finally we have Xyrena’s Scented by Willam (which I vow to review soon), a drag queen known for her acerbic wit and controversial appearance on RuPaul’s Drag Race. Scented is really quite beautiful – a violet-tinged iris with woods and musk that channels shades of Tauer’s discontinued Pentachord White. Each of these celebrity fragrances is really good and it’s refreshing to see such care, attention and quality applied to fragrances which so often have simply been a cash cow to complete a celebrity’s brand.

It seems as if celebrities now know that they have to work a little bit harder to sell a scent. They can’t just release yet another fruity floral in a clingy bottle and call it the Emperor’s New Clothes – they actually have to make it smell good. With the continuing rise of nice and luxe, people are willing to spend more money on a bottle of perfumer, but they’re going to buy less bottles, so whatever they buy must be interesting. Celebrities have caught on to this. The biggest thing though – they actually need to be a celebrity, ain’t nobody gonna buy Eau de Tan Mom any more.

What do Mon Guerlain, Gabrielle de Chanel, AURA by Mugler, Twilly d’Hermès and Scandal by Jean Paul Gaultier all have in common? Well, first and foremost they all launched in 2017 – and let’s face it, each is an absolutely massive release from some of perfumery’s biggest brands. 2017 will definitely go down in history as the year of the launch (the mainstream feminine pillar launch if we want to get specific) and these five big brands have pulled out literally every stop to make their olfactory mark on 2017. They’ve recruited big stars like Angelina Jolie (Mon Guerlain) and Kristen Stewart (Gabrielle), and have created visually stunning bottles that range from glass hearts formed in the Emerald City (AURA) to carriage lanterns topped with little bowler hats (Twilly), not to mention a pair of legs falling out of a taxi (Scandal). In the case of two of these launches, the fragrances are the first feminine pillars from their respective brands in quite some time. It has been quite the year for launches, indeed – launches that are eye catching and nose catching for many.

But the trend we’re talking about here is not the simple fact that these brands have all had big launches, no, the trend is specifically in reference to a commercial theme that has run through each and every one of them. There’s no use beating around the bush – all five of these launches are very commercial and whilst there may be some interesting work going on inside the bottles, such as the super-radiance of Gabrielle’s floral notes, the clash of smoke, vanilla and jungle greenery in AURA, and the ginger-tuberose shock of Twilly, the overarching feel of these fragrances is that they were created to appeal to a wide audience. Even MUGLER, who are renowned for their divisive compositions, could be accused of a less polarising approach with their latest output. They all smell great but they lack a sense of boldness in their signatures.

So why is this happening? Are consumers buying less? Are they moving away from mainstream to niche? If so, why aren’t these fragrances more daring? That’s a lot to answer, but I wonder whether it has something to do with the level of investment these brands have to inject into the development, marketing and visual impact of a new scent. Perhaps they are worried about their return of investment? Take Guerlain for example, they have funnelled millions into the launch of Mon Guerlain and just to be sure that the scent would resonate with consumers, they tested it as a boutique exclusive (the new discontinued Mon Exclusif) prior to its launch.

So who knows why the big brands are being commercial? They’re getting the packaging and concepts right, that’s for sure, so let’s just hope that in 2018 they will bring a little bit more innovation to our noses. I know that my nose is waiting with great anticipation.’

Categories: Features, Slider
Tags: guide, perfume, scent, grooming, male, 2017, best of, blogger, Candy Perfume Boy, fragrances, Thomas Dunkley, trend report, trends
RECENT POSTS
CHECK OUT:
LATEST FROM OUR SHOP
Follow By entering your email address you agree our blog partner (BlogLovin) sending you emails with our latest blog. You can always unsubscribe. We do not pass your information to anyone else. See our privacy policy.