The Perfume Garden by Kate Lord Brown might just be the perfect book to escape with (seeing as we still can’t travel very far). We’ve only recently discovered it and, of course, immediately added it to our Fragrant Reads bookshelves. Now, here’s why you should read it, too…

‘I understand why creating a perfumer protagonist is catnip for novelists,’ says Angela in her pithy review on the Now Smell This blog. ‘Perfume is glamorous, and the art of creating fragrance holds more mystery than, say, playing the cello. But so many novelists butcher perfumery. Often they portray noses as bloodhounds who can sniff a sprig of mint down the block, but they ignore the heart of creating a perfume — beautiful, effective composition.’

Mercifully, she notes, ‘Kate Lord Brown avoids this pitfall.’ Adding: ‘Thank you, Brown, for not spending paragraphs having your perfumer heroine wax on about the smell of a carrot that was raised in a field fed by spring water run off through alfalfa fields where a gassy Doberman frolicked.’

We have all, I am sure, read (and raised eyebrows at) books like that, or films that overly romanticise what remains, after all, an exact science. Then again, don’t get this book expecting it to be a faithful reconstruction of how a perfumer works.  The main protagonist here, Emma, being a perfumer is more like one of many ingredients rippled through a fragrance, than the entire composition itself. Instead, the pleasure of reading this novel comes from its dreamy, evocative descriptions and the clever weaving together of two stories. 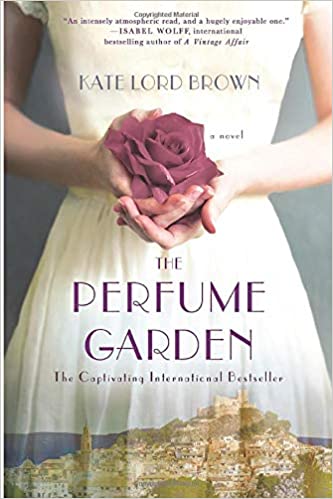 One story is set in the modern day, just after Emma simultaneously loses not only lost her mother, who was also a perfumer, but the father of her child at the same time. She travels to an abandoned house her mother owned in Valencia, and in renovating it, discovers all manner of disturbing family secrets revealed in the flashback portion of the book, set during the violence of the Spanish Civil War. Interspersed throughout is the sense that the author is fully in tune with her own senses – who understands that taking time to describe a smell not only helps evoke a place, but adds another emotional connection for the reader. At one point, Emma tries to think of a particular fragrance ‘like a half-remembered melody she couldn’t sing’ and imagines the fragrance she would like to make of her time in Spain; writing a list as inspiration:

Yes please, sign us up for a bottle! The rest of the novel is similarly lush, and should really be enjoyed in the garden, preferably on a sunny days with a glass of something cold, and hopefully sitting somewhere near a heady honeysuckle or fragrant blossom to immerse yourself in glorious scents as you read. It might not be the most detailed description of a perfumer’s work, but it’s a romantic – heartbreaking at times – engaging tale of a house giving up its secrets and the way scent weaves its own tale in all of our lives.

Categories: Features, Slider
Tags: fragrance, perfume, scent, book, novel, fragrant reads, The Perfume Garden, Kate Lord Brown
RECENT POSTS
CHECK OUT:
LATEST FROM OUR SHOP
Follow By entering your email address you agree our blog partner (BlogLovin) sending you emails with our latest blog. You can always unsubscribe. We do not pass your information to anyone else. See our privacy policy.