If you’re anything like us, you’ll have had just about enough of it all by now.
The C word.
It’s lovely and everything – don’t get us wrong – but as it’s been building up for what seems like half the year and we are now all completely exhausted, we think it’s time to sit down, grab a cuppa and wrap your nose around something utterly glamorous (and with nary a mention of tinsel, trees or flippin’ turkeys.)


In our extensive library of pages to explore here at The Perfume Society, we have filled some of them with the concise histories of perfume from Ancient Egypt to the modern day. But for now we’re going to have a brief flit to the ultra glamorous world of the 50s and 60s perfumes for now – do you happen to know which famous perfume began life as a bath oil…?
Well, as the one and only Estée Lauder told our co-founder, Jo Fairley, one afternoon over afternoon tea at New York’s Plaza Hotel: ‘Back then, a woman waited for her husband to give her perfume on her birthday or anniversary. No woman purchased fragrance for herself. So I decided I wouldn’t call my new launch “perfume”.  I’d call it Youth Dew,’ (a name borrowed from one of her successful skin creams). 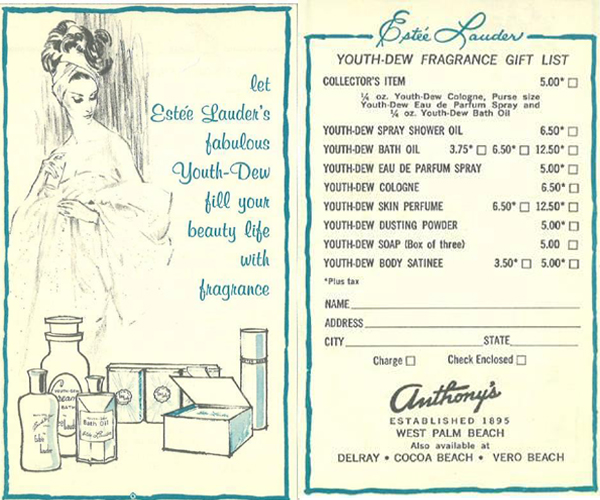 Launched in 1953, Youth Dew had a clever dual-purpose: ‘… a bath oil that doubled as a skin perfume to buy, because it was feminine, all-American, very girl-next-door to take baths. A woman could buy a bath oil for herself without feeling guilty or giving hints to her husband.’  And when Mrs. Lauder declares that women’s status got a boost when ‘a woman felt free to dole out some of her own dollars for scents,’ who can argue with that…?
Fashion designers really began to wake up to the world of perfumery in this vibrant era: the ‘boy wonder’ Yves Saint Laurent unveiled his ‘Y’ in 1964, and Rive Gauche in 1968.  And then came mini-skirts. The Beatles. Pop Music. The Pill. Parents everywhere lay awake at night worrying about their daughters’ virtue in ‘Swinging London’ and beyond – and things would never be the same again: it was as if the whole focus had shifted, through this ‘Youthquake’. And did they wear perfume? You bet… 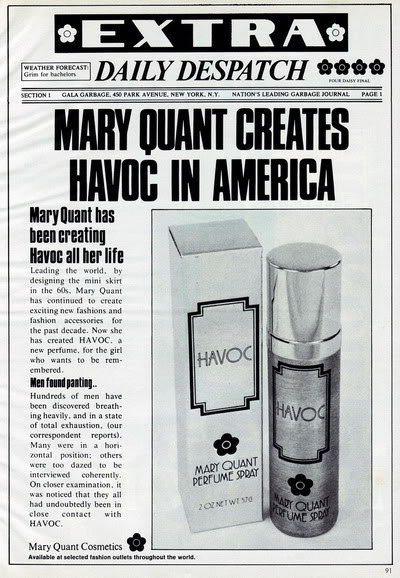 Fashion maven Mary Quant launched a range of fragrances – including the aptly-named Havoc. ‘I wanted a truly modern scent. Most of the perfumes are so old-fashioned, I wanted something frankly sexy,’ she said.
And by the sounds of the ‘men found panting’ in the tongue-in-cheek advertising copy, she got it…
Fancy a scent-skip to Ancient Greece or the Roaring 20s…? Step into our fragrant time machine right here!
Written by Suzy Nightingale
Category: Features
Tags: fragrance, perfume, scent, history, 1960s, sixties, vintage, 1950s, fifties, Mary Quant, Youth Dew
RECENT POSTS
CHECK OUT:
LATEST FROM OUR SHOP
Follow By entering your email address you agree our blog partner (BlogLovin) sending you emails with our latest blog. You can always unsubscribe. We do not pass your information to anyone else. See our privacy policy.