ånd fragrance have launched a campaign entitled FFS (For Frånk’s Sake), and are donating 20% of their December 2020 profits to support sustainable frankincense. Here’s how YOU can help…

The new niche fragrance brand started by Simon Constantine (formerly of Lush) is on a misson to (as he puts it) ‘unstink the world!’ What that means is n ot merely getting people to wear the fragrances, but making genuine changes to the way perfume houses source their ingredients.

Each of the ånd fragrance scents showcase ingredioents iconic to the fragrance industry, which we may think we know well, but which they are exploring in unique ways.

For the FFS project, the idea is to create a regenerative permaculture in Somaliland through funding small-scale frankincense nurseries. Frånk is, as the name may suggest, built around the note of frankincense, but it’s the fruity, mischeviously joyful side evoked, here (not the fusty, dusty, church-y scent that many of us may associate it with).

Simon wanted to put his money where his mouth. Because, after visiting Somliland last year, he felt truly moved to act. Here’s the problem…

‘This brilliantly beautiful region is epic in every way possible,’ he explains. ‘In true biblical style it’s home to Frankincense, myrrh and even gold. Equally the ravages of drought, disease and locust plagues continue to kick the people and land at a time when they need support the most. Somaliland has repeatedly been cited as the case study for the impacts of climate change. Peoples’ livelihoods rely on the land (the majority of communities being pastoral herders); however, since 2015, prolonged drought led to disastrous die offs of animals, leaving thousands to settle in internally displaced refugee(IDP) camps.

Frankincense provides a lifeline for many communities. After “tapping” with a cut to its bark, the Frankincense tree provides golden tears of resin. As both rain and money dry up the trees are tapped to the point of exhaustion and possibly death, another knock on effect of climate change.’

Just watch this short film to see for yourself the extent of the dangers frankincense – and those who rely on it – have faced.

But all is not lost. Not yet. We have ways of helping, of putting back, of doing good while smelling great. Says Simon:

‘And so here is the solution…a series of small scale community nurseries that begin to rebalance the situation.Growing hardy frankincense trees for the future. As these begin to flourish, it’s our plan to work with communities to create further opportunities using cutting edge growing techniques to restore and regenerate these drylands.

As these begin to flourish it’s our plan to work closely with communities to create further opportunities using cutting edge growing techniques which will help to restore and regenerate these harsh drylands. But let’s not forget the people themselves. The refugee camps require urgent aid and medical attention. And we believe that short-term aid can become true resilience when focused on regenerative livelihoods.

It would be great if we could give something back to Frankincense this Xmas, For Frånk’s Sake!’

So yes, now 20% of ALL ånd fragrance sales during the Christmas period will go directly to fund the build of a Frankincense nursery. Join in, smell fabulously festive and help spread the word #forfranksake #unstinktheworld…

We all know perfume’s power to trigger feelings and emotions (even to bring the odd tear to our eyes). But we’ve rarely seen that so tenderly expressed in scent form as at the Gorilla Perfumes exhibition which has popped up (for all too short a time) at The Vinyl Factory in Soho. (If you’ve missed it, don’t fret: The Perfume Society‘s Jo Fairley was invited by Gorilla Perfumes to make a series of short films which you can see below, capturing each of the different fragrances.)

Mark Constantine, if you’ve been living on Mars, is the founder of LUSH. Simon Constantine is his big, grown-up son (the ‘gorilla’, they explained, of the brand’s name. Which finally explains something we’ve always wondered about.) And this exhibition showcased more than a dozen new scents, many of which will soon be appearing in Gorilla‘s portfolio, but some of which were for this show only. Marching to the beat of their own drum, the pair create fragrances inspired by art, music and poetry – and, in this case, love and loss.

The exhibition was called Death, Decay & Renewal – which is pretty bold in itself. (Though actually, it’s at the time of starting to decay that many flowers – especially the white flowers – give off their most beautiful scent.) And the whole show was a bit of a momento mori, as it turns out, for absent friends and family.

Perfume, for Mark and Simon, is very personal. They often create together (Mark’s relegated to the role of assistant, quite often). Loud music blares. ‘Can’t create in silence,’ explains Mark. But this particular exhibition grew out of emotional times for the Constantine family. Those of us who love fragrance know how it can shoot an arrow straight to the heart, and remind us of those we love – and have maybe lost – but that was the definite sub-text, here.

At the heart of the exhibition, in fact, was a shed. ‘Dad’s Shed’, garlanded with honeysuckle and planted with chamomile, conjuring up the garden shed at home where Mark spends a lot of his time ‘just sniffing, really’ – and which Mark and Simon recreated in scent form. Inside, a row of houndstooth tweed jackets hung from pegs – with the invitation to bury your nose in the wool, and breathe ‘Dear John’: warmth, tobacco, touches of coriander and lime: a so-nuzzleable ‘man smell’. (We’d quite like to get up-close-and-personal with that on someone.)

But the garden shed turned into something of a confessional, for Mark. Tucked inside one of the jacket pockets hanging from a hook was a photo of a very handsome man – the father Mark never knew, until just before he died. (He’d left when Mark was two.) Around Mark’s 60th birthday, a friend had tracked his long-lost father down – in South  Africa. Mark flew out there, met his father – and two sisters he’d never known about. And then six weeks later, Mark’s father died. He’d had the chance to give him a bottle of Dear John, the scent he’d created for him – and both agreed that seeing each other again was the highight of their lives. ‘Was he hanging on, waiting for me to find him?’ is the question Mark asks himself, now. The happy ending: Mark’s become close to his sisters, Sarie and Jo (he’d found out about another sister, Laura, some years before. To coincide with this exhibition, Mark had created a private, personal perfume which beautifully captured the personality of each (and you can see the Three Sisters mini-film, at the bottom of this page.)

Emerging from the shed, we stepped into a picket-fenced garden of citrus trees. That was Mark’s father’s garden, conjured up with a light, lemony and very wearable fragrance. (Others – such as Cyanide, below – would be challenging on the skin, for sure. But that’s part of what Gorilla‘s about: pushing back boundaries, making you think about perfume – and Mark and Simon having a damned good time, doing it.) There were tears in Mark’s eyes, talking about his father: almost as soon as he’d got off the plane from the funeral, Mark rushed into the lab clutching leaves he’d brought from the South African garden, to start conjuring up a tribute: Dad’s Garden (Lemon Tree), with its uplifting citrus elements.

There was literally nothing ordinary in this show – which isn’t to say there weren’t some very wearable scents. But many of them had a message. Mycelium, for instance – all mushroomy, earthy and ‘grounding’ – was created after Mark read about the work of a famous fungi guru (yes, with LUSH‘s renowned punsters, there were plenty of jokes about ‘fun guys’ being bandied around) – to represent the way that the structure of mycelium (the organic web of fibrous tissues in the earth from which mushrooms grow) mimics the neural pathways in the human brain, and even the ‘World Wide Web’, or the internet.

Smuggler’s Soul also had a very important sustainability message. In India, sandalwood is endangered: the ‘ivory of perfume ingredients’, stolen and smuggled and controlled by bandits. Back in 2004, Simon and a colleague had discovered that the sandalwood they were using might have been procured illegally – so they flew out to investigate. In New Delhi, they managed to get a meeting with a man known as ‘The Don’, who controls the majority of the Indian sandalwood trade. They asked him about a renowned poacher called Veerappan (recreated in the exhibition via a scary shop window dummy, garlanded with rounds of ammo), who was wanted for the murder of more than 20 people. When they mentioned Veerappan’s name, the shutters came down ‘and we were basically told the meeting was over’. So the sandalwood which purrs creamily in Smuggler’s Soul, then, isn’t the endangered stuff – but the new harvest of sandalwood which is coming on-stream in Australia, a beacon of eco-hope in the perfume world.

Stayin’ Alive was definitely more accessible and wearable, with its booming frankincense base note (or possibly bass note, in this case): upbeat, full of joie de vivre, lovely on the skin. It uses the only certified organic frankincense in the world, from the Sanaag region of Somalia – and ingredients and ‘terroir’ were also important to Mark and Simon, putting these perfumes together. ‘I’ve learned a heck of a lot about sustainability from him,’ acknowledges Mark..

A fragrance called Cyanide, anyone? We just knew this was going to smell of bitter almonds, which are the source of the poison cyanide. Not surprisingly, this isn’t one of the scents which will be appearing in a store near you anytime soon – but it was intriguing, if somewhat unwearable. 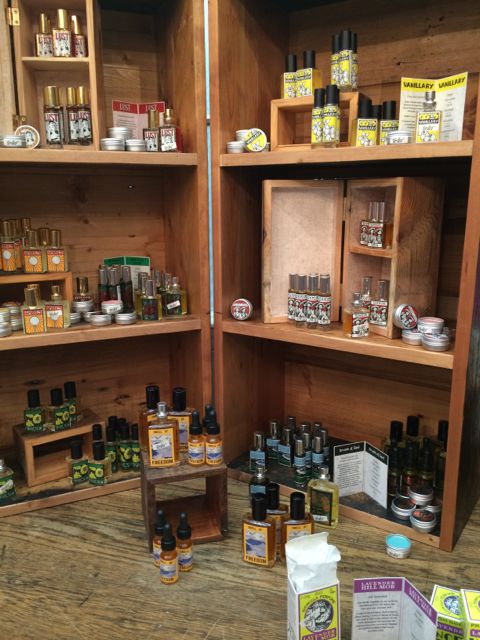 And so the exhibition of perfumes went on: some thought-provoking, some utterly beautiful (Kerbside Violet, case in point), some sad (and some just plain horrible, but Mark and Simon know that!) Though the pop-up was all-too blink-and-you-miss-it, many of the scents will be making their way to the Gorilla Perfumes store in Islington, with others due to appear on-line here, at some point, joining the collection.

But we were truly touched to have the opportunity to walk round the so-personal show with these two men – basically, they don’t sweat, they just have ideas coming out of every pore.

And the next-best-thing to being there, we hope, is to put the kettle on, watch these mini-films – and perhaps make sure you’ve got a Kleenex handy.

Click on videos below to see more of the mini-films we made with Gorilla.

Category: News
Tags: Simon Constantine, Mark Constantine, Gorilla Perfumes, Death & Decay, Dear John, Dad's Shed
RECENT POSTS
CHECK OUT:
LATEST FROM OUR SHOP
Follow By entering your email address you agree our blog partner (BlogLovin) sending you emails with our latest blog. You can always unsubscribe. We do not pass your information to anyone else. See our privacy policy.