Lavender is having a moment in fragrance right now – according to a repot by the NPD group, sales of prestige lavender beauty products in the U.K. have increased by a staggering 552% from January 2019 to the end of April 2019. So you might have previously dismissed it as ‘grandma’s scent’, but get ready to leave your lavender preconceptions at the door…

When you think of a purple swathe of lavender being harvested for the perfume industry, your mind possibly strays to the fields of Provence. But did you know we have our own beautiful lavender farms right on our doorstop in the U.K?

We paid a visit with the British Essential Oil Association on a field trip to Castle Farm in Sevenoaks, Kent, to see the lavender harvest in action and – most excitingly – to see their very own distillery, and watch those tiny flowers be turned into the most lusciously fragrant essential oil: from field to bottle, in front of our very eyes (and noses)… 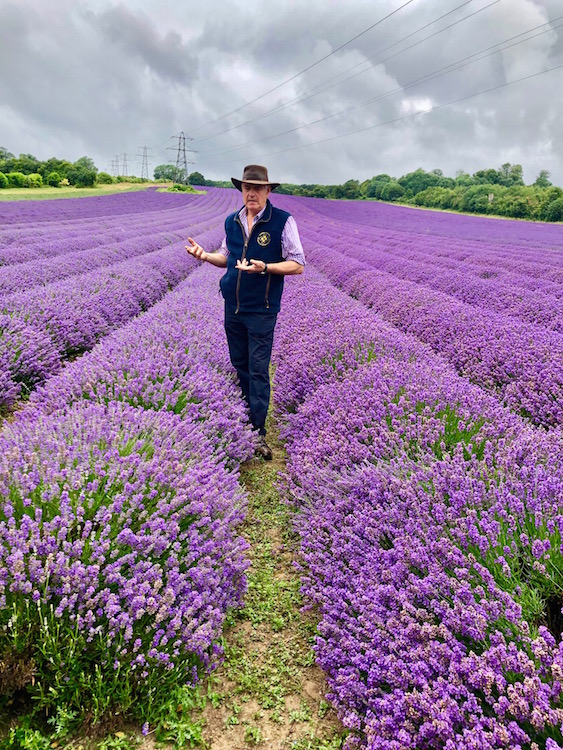 Starting our day with a glass of apple juice from the farm and a lavender shortbread biscuit, we ignored the gathering clouds and headed out to the fields to learn about the differing types of lavender they grow there, and how the oils from them are used.

The Alexander Family have been farming in the Darent Valley since 1892, when the enterprising James Alexander apparently brought down 17 milking cows on the train from Ayrshire in Scotland. Today, the farm is managed by William and Caroline Alexander, with involvement from each of their children, Lorna, Thomas and Crispin, and supported by the hard-working Castle Farm team. 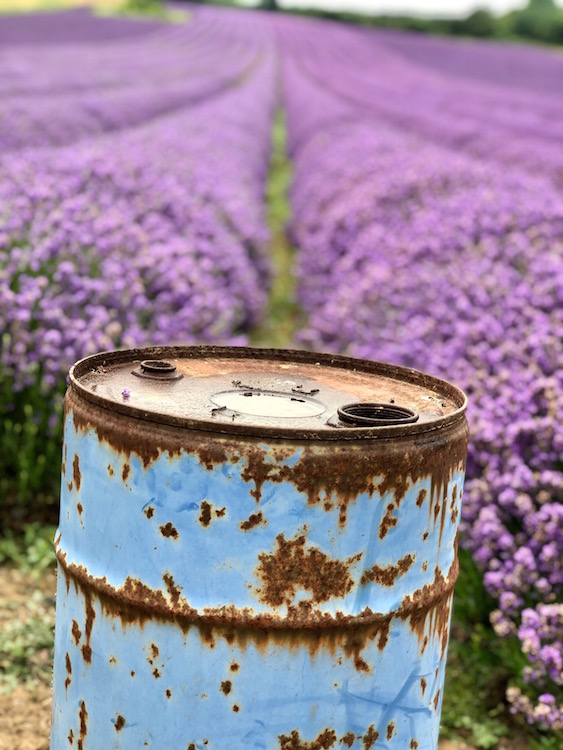 The lavender farm was established in 1985, when William and Caroline went to market – Covent Garden as it happens – selling dried hops. By 1990, The Hop Shop (as Castle Farm is also known) was a major producer of dried flowers, growing over 70 different flowers and won many awards, including 5 consecutive Gold Medals at the RHS Chelsea Flower Show. Now the farm is a sprawling 1,100 acres, with crops of wheat, barley, rapeseed, hops, apples, pumpkins and a grass-fed herd of beef cattle. And, of course, the magnificent fields of lavender – the largest lavender farm in the U.K. 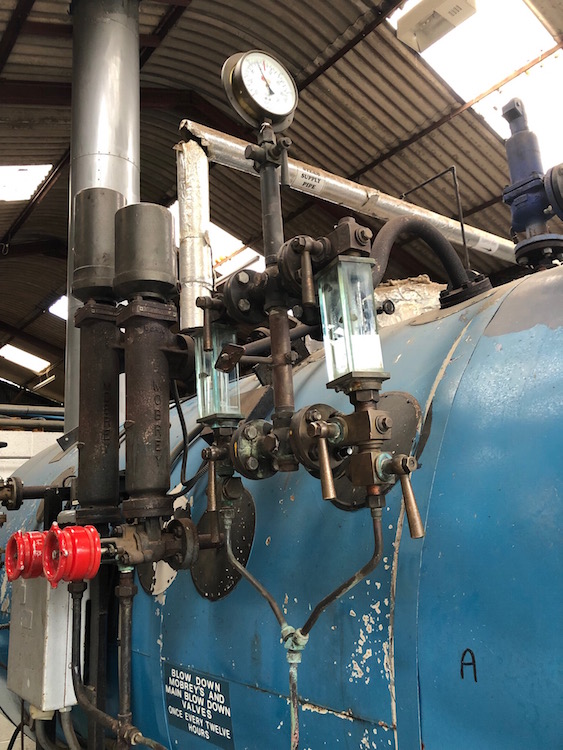 In the distillery, they had the ingenious idea of using the trucks that harvest the lavender to directly distill the essential oil from – time is of the literally essence for the highest quality yield – and so they put a lid on top of the container, in which 7 tonnes of lavender are heated to 100° in just ten minutes. From there, a huge pipe is attached to catch the and filter the steam to the tanks in a large barn. 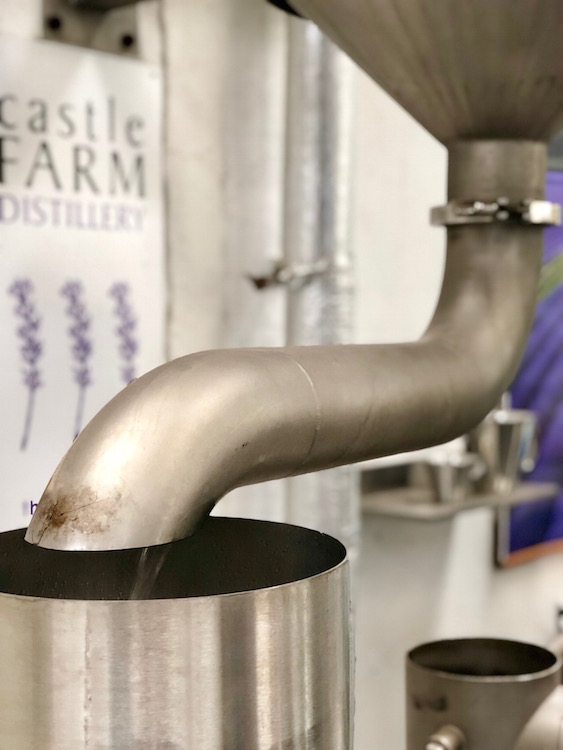 As we stood with steam wafting around our ankles, the smell became almost overpowering – it felt like the lavender fields had been turned into a sauna, with misty swirls of mineralic steam mixing with the scent of drying hay and engine oil. A bit like being on a steam train in a dream. A truly surreal and unforgettable experience. And then, of course, we got to smell the oils themselves… 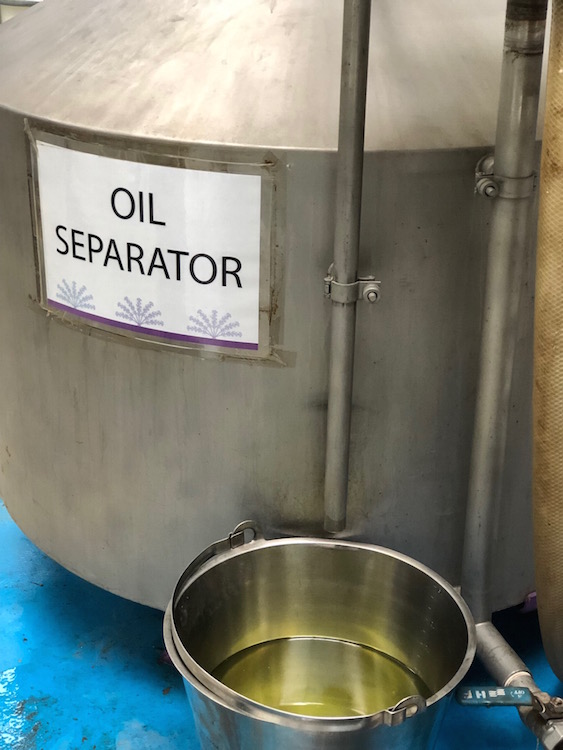 Premium Lavender Oil: An elite single origin oil – luxuriously delicate with exceptional fragrance notes for aromatherapy. Intensely pure. ‘This oil is extracted solely from our Maillette Lavender plants – and taken in the first 20 minutes of distillation only – making it the finest and most delicate of our lavender fragrances.’ With all the characteristics of a ‘high altitude Lavender Oil’ (which, we learned, has nothing whatever to do with the altitude a lavender’s grown at, and everything to do with the type of lavender and how long it’s distilled for!)

Kentish Lavender Oil: A high-grade, honeyed, gentle Lavender essential oil with antiseptic, anti-inflammatory, antibacterial and mild anesthetic properties. This oil is made from their Lavandula Angustifolia, grown and distilled on Castle Farm. Widely used in aromatherapy, perfumery and medicine, the pure oil is safe for use directly on the skin.

Kentish Lavandin Oil: Lavandula x intermedia is extracted from Castle Farm’s Grosso plant variety and has a strong, cleansing and refreshing scent with elements of camphor. Often used for room fragrancing, candles, as a moth repellant and to clear cold-sufferers’ heads, the fragrance is comforting but less nuanced than the others, which are more suitable for perfumery.

The oils are sold in the farm shop, and online, and also sold to private companies for use in the fragrance and beauty industry. 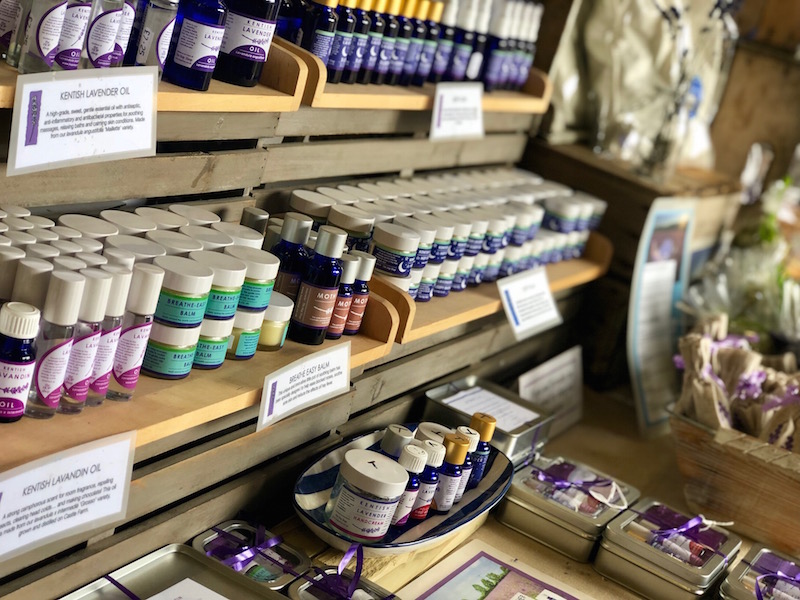 The Hop Shop – is open daily throughout the year, however the Castle Farm Lavender fields are only in flower from late June until late July. Lavender plants for sale from the shop from late April/early May, but they explain, ‘the Lavender season really gets underway in mid-June and the glorious scent and vibrant colour of the fields fill the valley and we start to hand cut fresh Lavender bunches. Harvesting for oil starts in mid July and continues until early August, but is obviously weather dependent.’ 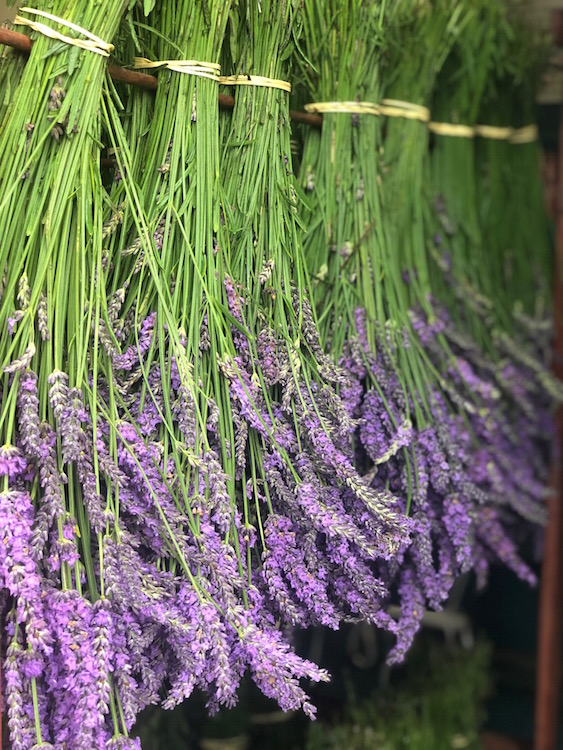 Of course, on the day they began harvesting and the morning of our field trip – the heavens opened. If the rain lasts too long, half the entire crop can be lost in under an hour. Luckily, it wasn’t too long before we could venture out from under the trees and take photos – Castle Farm had the brilliant idea of including an Instagram Field, complete with perfectly positioned bench, so people can take scented selfies to their heart’s content, without disturbing the harvesting. Genius! 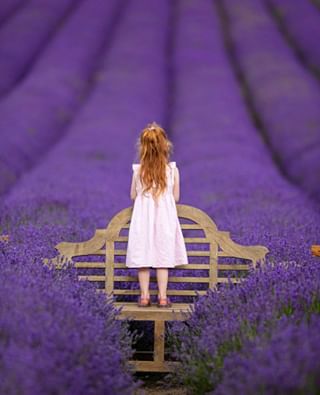 And to show it really is a family affari, this photo (above) is of William and Caroline’s grandaughter, taken by their talented son.

Castle Farm began harvesting while we were there, ‘…but it takes us over a week to clear all the fields, and the distillery is now running daily. We completed harvest of the large field at the back of the valley on 22nd July, but our field with the Lavender Bench and viewing area will NOT be harvested until after this weekend (27/28 July). We are still running Lavender Tours until we harvest our very last field!’

You can book online for weekday tours, or on arrival at the farm for weekend tours.

We’re not sure if it was the supremely soothing smell of the lavender or how long we’d been traipsing through the fragrant fields – possible a mixture of both – but goodness, we slept well that night.

We were also enthused to seek out four of our favourite lavender fragrances and urge you to do likewise. Forget the aromatherapy benefits for a moment and focus instead on the incredible nuances that lavender can add to a scent… 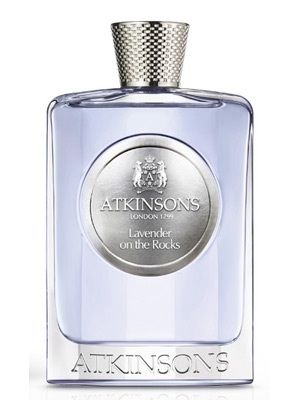 Atkinsons Lavender On the Rocks
True to the cocktail-esque name, this one has a double-shot of lavender to tickle your fancy. From the bracingly fresh opening with geranium and basil to the honeyed hay-like dry down with almond, guaiac wood and saffron, every facet is allowed to shine.
£130 for 100ml eau de parfum
harrods.com 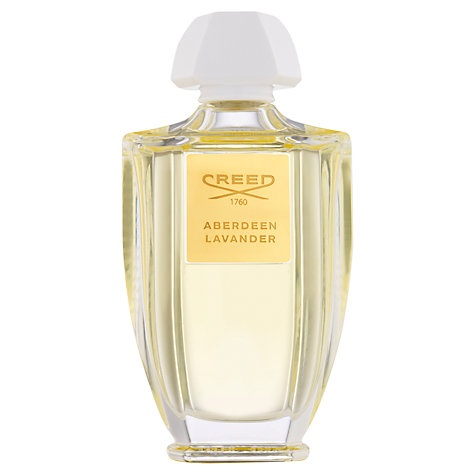 Creed Aberdeen Lavender
An Ambrée fougére, absinthe is added to rosemary, bergamot and lemon before succumbing to a powdered, musky lavender ramped up with tuberose, iris and a dusky rose. Dark patchouli, smoky leather and cool vetiver make for a surprisingly sexy flourish.
£200 for 100ml eau de parfum
libertylondon.com 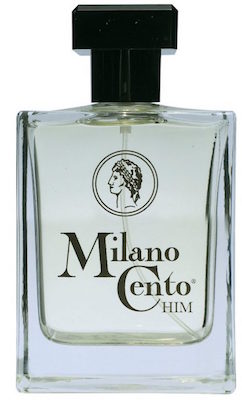 Milano Centro HIM
Luminescent citrus segues to a herbaceously dappled breeze of rosemary, lavender and basil. As it warms, you’re swathed in the musky warmth of smooth sandalwood and suavely sprinkled spicy notes of clove, cinnamon and amber atop a darkly glimmering patchouli base.

Want to try it for yourself? Find this in our Explorer Men’s Discovery Box – along with SIXTEEN other fragrances to explore! 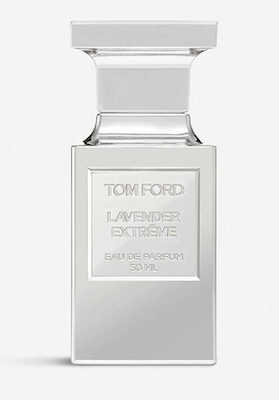