Did you know we have an ever-expanding bookshelf of Fragrant Reads here at The Perfume Society? Combining two of our favourite things (perfume and books), we’re always on the lookout for great reads to recommend you – from just-published new novels and scholarly scent explorations through to more historically inclined tomes – all with a central scented theme.

We know we’re not alone in getting ever more geeky about fragrance – our feedback from you overwhelmingly shows we’re seeking more information about the fragrances we wear – and the people who make them. Throw in some scientific facts or fascinating glimpses behind-the-scenes of ingredients, or take us by the hand to explore the faces and inspirations behind some of our favourites and we’re happy as pigs in… er, petals!

Today we’re sticking our noses into a book that lovingly recounts scents once regarded as ‘forbidden’ or even dangerous, and the incredibly glamorous people who flouted such milksop opinions and wore them anyway. We rather think you’ll fall in love with this one, just as we did… 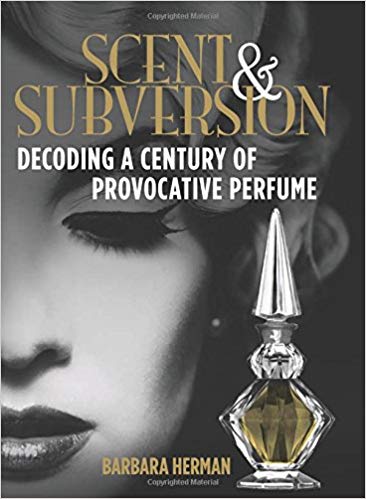 Far more than merely a way to smell pleasant, those of us obsessed by fragrance know well that perfume has historically been seen as subversive – and still can be used to break the rules and unsettle cultural conventions. Highlighting the use of perfume to play with society’s gender conventions, Barbara Herman analyses vintage perfumes and perfume advertising – a theme that she began on her popular blog, Yesterday’s Perfume.

Lavishly illustrated, and lovingly detailed descriptions of vintage fragrances through the ages – and the femme fatales and mysterious stars associated with wearing them; Herman includes essays on scent appreciation, a glossary of important perfume terms and ingredients, and tips on how to begin your own foray into vintage and classic perfume – such a great way to navigate this sometimes intimidating world, and to find a new love from a back catalogue you may have missed.

I love how Herman injects wit into her descriptions, such as this from her review of Le Galion Sortilége: ‘Boozy, lush, animalic, but lady-like, this is one of those perfumes that, to an untrained nose, might be described as ‘smelling like my grandma.’ Well, maybe if your grandma was Colette or Marlene Dietrich…’ The volume is written with a mixture of humour, historical fact and useful advice, and this is a book that any perfume lover would be delighted to read.

Barbara’s blog is well worth re-visiting, but you may notice the last entry was updated in 2016. This is because she had a rather exciting project up here sleeve…

Barbara Herman: ‘I launched a perfume brand — Eris Parfums. Named after the Greek goddess Eris, daughter of Nyx (Night), and one of the bad girls of Mt. Olympus with a reputation as a troublemaker and subversive, Eris has thrown down her gauntlet (or thrown her Golden Apple?) in the form of three new perfumes. I think you’ll like their inspiration: vintage floral animalics.

Belle de Jour, Night Flower, and Ma Bête were each composed by perfumer Antoine Lie (Tom Ford, Givenchy, Comme des Garçons, Etat Libre d’Orange, et al) and each are a take on vintage perfume styles but with a modern twist. I really love them and I hope you do, too!’ And there’s now a fourth fragrance in the collection – Mx.

Having had the pleasure of sampling each of the fragrances, I can confirm that those of with a penchant for vintage will get a real kick out of these. My favourite has to be Ma Bête – ‘(My Beast) caresses you with the suggestiveness of perfumed fur. A collision of the floral and the animal, MA BÊTE combines a regal Tunisian Neroli with spices and a 50 percent overdose of Antoine Lie’s own animalic cocktail.’

Whether reading about delightfully subversive scents or wanting to douse yourself in their forbidden essence, this season is an excellent time to slip into your most fabulous gown and exude dangerous glamour, don’t you think?

Categories: Features, Slider
Tags: fragrance, perfume, scent, history, book, read, vintage, Barbara Herman, fragrant reads, bookshelf, Scent and Subversion, Eris Parfums, Antoine Lie
RECENT POSTS
CHECK OUT:
LATEST FROM OUR SHOP
Follow By entering your email address you agree our blog partner (BlogLovin) sending you emails with our latest blog. You can always unsubscribe. We do not pass your information to anyone else. See our privacy policy.