It was with heavy hearts we learned of Brooklyn Fragrance Lover having passed away last week. Carlos was a hugely popular YouTube reviewer  (he was fast heading toward 70k followers and often got recognised and stopped on the street), and a long-time supporter and friend of The Perfume Society.

There’s no doubt his loss will leave a huge gap in the fragrance community at large.

Carlos hadn’t been in the best of health, posting online about a trip to hospital in October last year. But he’d been on the mend, it seemed, so the upset rippled through Instagram. Within a matter of hours thousands of fragrance fans had flocked to his last post there, leaving shocked messages, saying goodbye. Among perfumers and famous fragrance houses who’d already left their own tributes – broken heart emojis, purple hearts (Carlos’ favourite colour), disbelief and condolences to his family and friends – what shone through were the number of messages from his followers. People who’d ‘found perfume’ as they put it, thanks to his easy-going, down-to-earth video reviews.

‘Thank you for teaching me everything about fragrances,’ one mourner wrote, while another movingly recounted: ‘I didn’t know you but your videos brought me closer to a happiness I share with my friends and family. Your videos seem so genuine and personable, this hurts like no other. Thank you for your contribution to this wonderful community even though you are gone too soon…’ 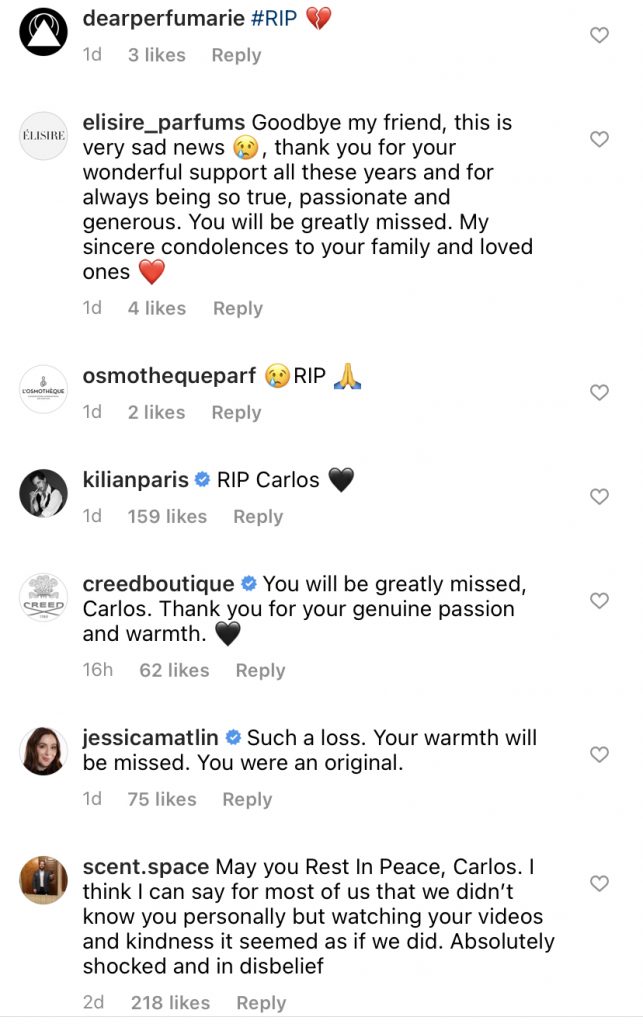 And there are many, many more messages, all similarly moved, mostly people who, like us, had sadly never met Carlos in person but had been touched by his affable, open personality that grounded his very knowledgeable and understandable reviews.

Carlos was a generous man who passionately gave everything he could – and most of his free time – to the world of fragrance; sharing the joy that can be had from a single spritz of something fabulous, celebrating launches from big names and indie brands alike. He also shared family photos on his Facebook page, along with his ‘fur babies’ (as he lovingly called them) ‘Jean & Claude’.

Scrolling through the thousands of personal tributes online, those words are repeated time and again: ‘genuine’, ‘passionate’, ‘honest’, ‘warm hearted’, ‘kind’. Would that we could all be remembered that way, let alone his legacy of many hundreds of excellent, informative and fun fragrance video reviews. We urge you to watch these, if you’ve not already enjoyed them, or to watch again, if you’re already a fan, and share them with others.

One of Carlos’ friends set up a GoFundMe page to help his family members with the cost of his funeral. ‘In addition to the funeral arrangements, some funds will be allocated for the caring of his cats.’ The target had been set at $10,000 – an amount that had been achieved within mere hours of the page being set up, and now stands at $34,367. Testament, indeed, of how well loved he was by perfume people around the world.

Among the many comments left by those donating, one simply says: ‘Carlos was a beautiful man who reached me and many more people with with his love for the world and joy for fragrances. May God be with his friends and family in this time of despair.’

Goodnight, Carlos. We know you loved amber perfumes best of all, and we’re sure Heaven smells all the sweeter now you’re scenting the clouds…

Categories: Features, Slider, News
Tags: fragrance, perfume, scent, blogger, YouTube, video, duft, Carlos, Brooklyn Fragrance Lover, FragCom, Fragfam, reviewer
RECENT POSTS
CHECK OUT:
LATEST FROM OUR SHOP
Follow By entering your email address you agree our blog partner (BlogLovin) sending you emails with our latest blog. You can always unsubscribe. We do not pass your information to anyone else. See our privacy policy.