First of all, let’s put hand on heart: this isn’t just one of the most exciting perfume experiences we’ve ever had. It’s one of the most exciting museum experiences we’ve ever enjoyed.
Le Grand Musée du Parfum opened in Paris just before Christmas 2016 – and last weekend, while in Paris smelling the Guerlain vintage archive, we got a first glimpse. (And sniff.) It’s sited on the spiffy Faubourg Saint-Honoré opposite one of the city’s priciest hotels, Le Bristol, in a ‘hotel particulier’ – a grand 19th Century mansion house with a courtyard, which has been modernised for the purpose of delighting the senses and educating visitors about the history of fragrance, ingredients, bottle design and more.
Once upon a time, the building was the home of the aristocrat Antoine-Marie Roederer (of Champagne fame), before being repurposed as the couture atelier of designer Christian Lacroix.
One look at the line-up of individuals who’ve been involved in bringing the project to fruition, and you can tell the place has instant cred. Key figures include Patricia de Nicolaï, head of the Versailles Osmothèque Museum, Sylvaine Delacorte (until recently Guerlain’s director of fragrance evaluation and development), Hermès in-house ‘nose’ Jean-Claude Ellena and Cartier’s Mathilde Laurent.
The tour begins down a spiral staircase in the basement. (First note to visitors: if you want to leave a coat or bag, which isn’t a bad idea because you’ll be here for some time, you need a two-euro piece for the lockers. I didn’t have one, and neither the staff of the museum nor the shop could help with change.)
In the vaulted cellar (where once upon a time Champagne was stored), you’ll first enter the ‘Seducer’s Gallery‘, which via pop art-esque illuminated panels showcases figures from history who deployed fragrance to beguile – from Cleopatra to Casanova, Marie Antoinette to Louis XIV, Catherine de Medici to Napoleon. (Pull back a curtain, press a button – and smell naughty scents from absinthe to ‘libertine boudoir’ via cannabis, as you progress through the room.) 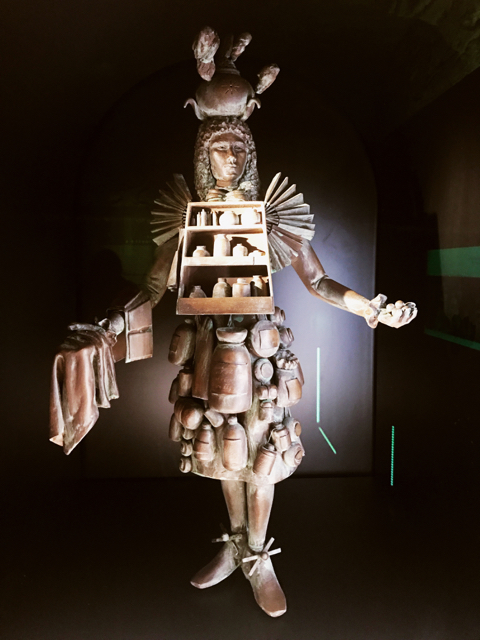 On the right at the back is a room which traces perfume’s roots from ancient Egypt to more modern times, via artefacts including truly ancient perfume bottles, eau de Cologne bottles from the 19th Century, and a wonderful bronze statue of a 19th Century scent seller (above); if you’ve been to Grasse, you may have seen a life-sized version there.
Even more thrillingly for scent-seekers, there are what appear to be three large modern washbasins – but in fact, when you place your hand over the bowl and position your hand over the symbol on the pedastal they stand on, ancient smells mist up from the ‘plughole’. There’s kyphi – the ancient Egyptian incense. (Sweeter than I’d imagined the blend of saffron, sandalwood, benzoin, lemongrass and rose to be), along with more familiar  frankincense and myrrh. For as long as your hand rests on the ‘Press Here’ symbol beside the ‘basins’, the scent will be released. Remove it, and the smell disappears. 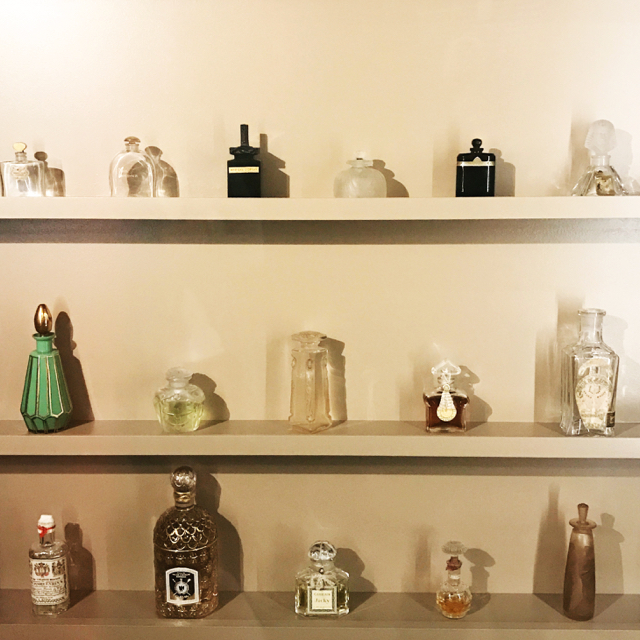 The third room on the ground floor explores the familiar links between fashion and fragrance, beginning with Paul Poiret and proceeding via Gabrielle Chanel and (new to me) Maurice Babani to Marcel Rochas, Schiaparelli and beyond. Brief biographies of the perfumers are accompanied by vintage bottles of the designer scents, while in the window opposite there are further vintage bottles to delight: Caron Nuit de Noël, Piver‘s Scarabée, Houbigant Mon Boudoir (long before Vivienne Westwood was a twinkle in anyone’s eye, NB), and many more. (See photo below.) There’s also a re-creation of a corner of Paris’s Houbigant perfumery, with antique artefacts.
Ascend the staircase (there’s also a lift) – and actually, I suggest leaving the entire ground floor till last. In fact I went straight up to the section on The Art of the Perfumer, where via large TV screens, renowned perfumers share stories of creation – including Mathilde Laurent, Jean-Christophe Hérault, Jean-Claude Ellena. 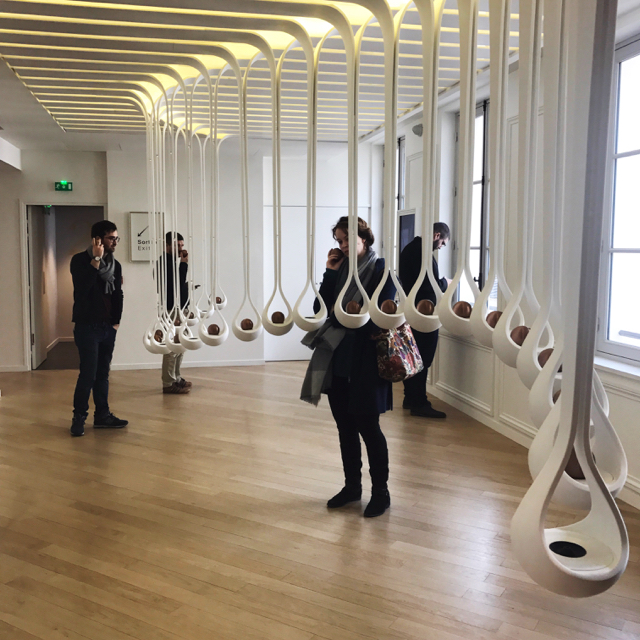 Again, high-tech dominates: a sort of ‘Newton’s cradle’ of electronic bronze orbs hangs from the ceiling. Pick up an orb, hold it to your ear – and if it’s not talking in your language, give it a little shake and an English explanation of a specific ingredient can be heard, at the same time as that precise smell is wafting out from a hole in the multi-tasking gadget. (I heard English and French; I couldn’t tell you if there are other languages programmed in there. But it’s hugely impressive, whatever.)
You’re then beckoned to step through a curtain into a sound and light installation – The Perfume Organ, by Jason Bruges – that you can watch below (resting feet which will no doubt be weary from treading Paris’s pavements, with their endlessly seductive window-shopportunities). The otherworldly music illuminates a perfumer’s organ via beams emitted from a ‘fragrance bottle’, in rhythm with the music. The Perfume Organ by Jason Bruges.

Down the staircase again and there’s a room focused on extraction and blending of ingredients – including a sprig of faux lily of the valley illustrating Headspace technology. This is the science of capturing and recreating the smells of flowers and plants – like muguet, in fact – which don’t release their fragrances through usual methods of extraction; Headspace technology belongs to IFF (who are part-sponsors of the museum). 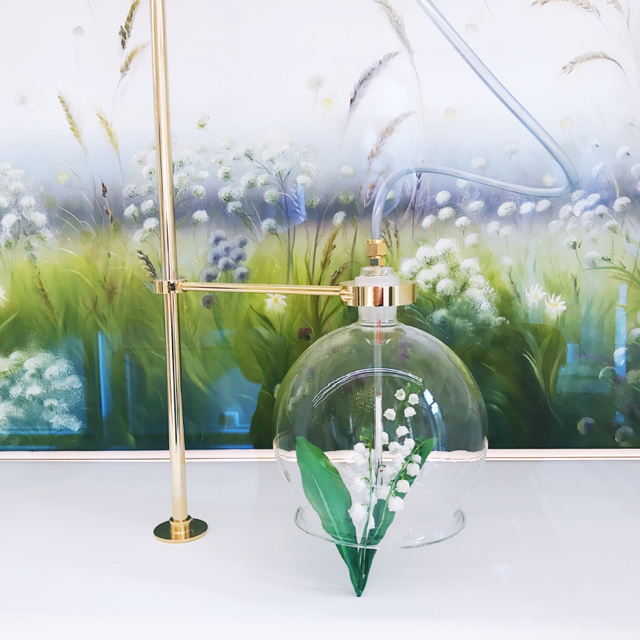 The ‘The Garden of Scents’ offers a real ‘Alice in Wonderland’ moment: the giant white flowers can be sniffed, as you progress through the room, which is designed to whisk you nostalgically back to childhood. As you place your face into the flower and press a button (there is a LOT of button-pressing in Le Grand Musée du Parfum), it might waft the scent at towards you of Coca Cola, wood smoke, cinnamon… 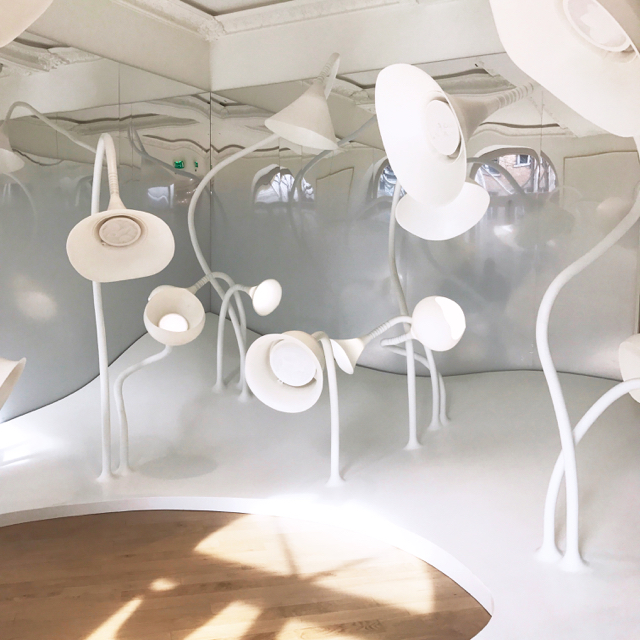 Turn a corner and you’re back in an 18th Century Parisian salon, complete with grey velvet ‘love seat’ (below) – again, interactive: touch a screen to ‘send’ a smell to your friend, sitting the other side of the high-backed chair. 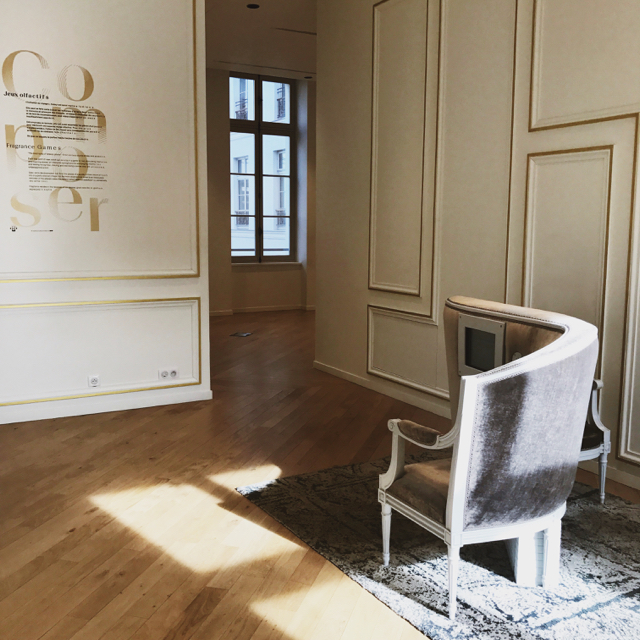 And so on, down to the Ground Floor – which is all about shopping, with possibly the most tantalising museum store any perfumista will ever have a shopping accident in. In a room featuring beautiful French windows all along one wall, commercially-available fragrances are available – from Aerin to Dear Rose via Thierry Mugler, Tom Ford, Cabochard, Jimmy Choo, Boucheron (hundreds, actually). You first smell them via small porcelain domes, and can then spritz your choices (generous quantities of blotters, too, I was pleased to see). All of these can be bought (and the stock’s sourced via a sort of robot who stock-picks from a glass-walled area along the side wall). 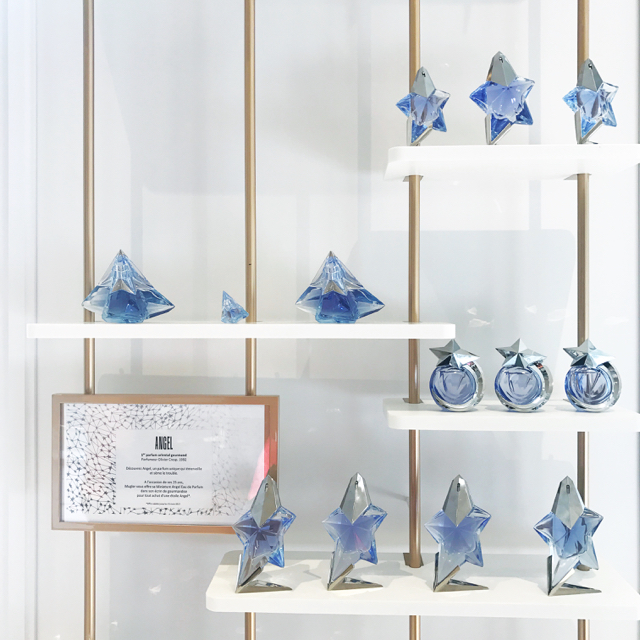 And oh, the shop itself. Every book about perfume you could possibly wish to read. Including mine. And let me confess that I became really quite emotional to find the one I’d co-written showcased there in a museum – right alongside Odette Toilette, Jo Malone and Chandler Burr – was really quite a pinch-me moment. Alongside just about every perfume book and publication on the planet, the museum offers little porcelain ‘Madeleines’ (a Proustian nod), to spritz with your favourite fragrances, games for children to improve their sense of smell. 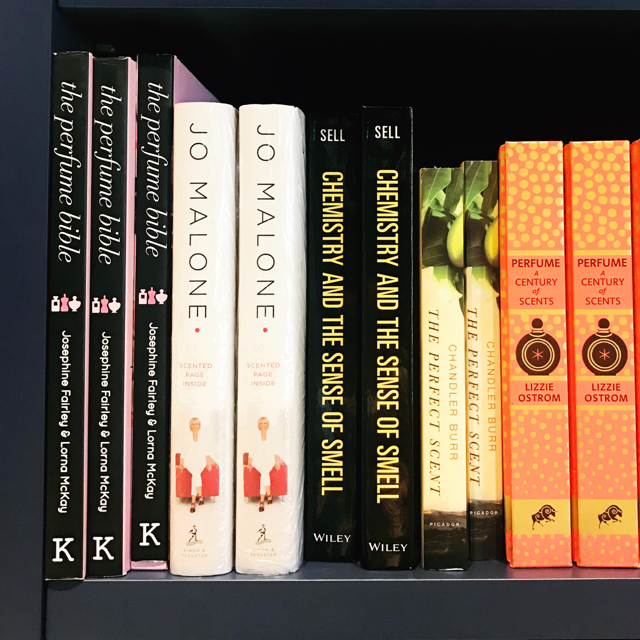 I’ve a few comments which you may find useful. First of all, as of my recent visit, there was – quelle horreur! – no guidebook that you can take home to read more about the exhibits at your leisure. The only thing for it, I found, was to take dozens of pictures of the very clear explanations of all of the exhibits on my phone, for reference. Secondly, I went on a Saturday morning quite early, when it was pretty quiet. This is such a hugely interactive experience that when this museum gets crowded, there’s a risk of Disney-like queues for the copper scent-balls, the ‘washbasin’ fragrance misters, etc. Go early. Or go late (there’s a specific late night).
But go soon, I tell you – and you won’t be disappointed.
By Jo Fairley
Le Grand Musée du Parfum 73 rue du Faubourg Saint-Honoré, Paris 75008 (Metro Franklin Roosevelt/Champs Élysées-Clemenceau)
Open Tuesday to Sunday 10.30am to 7pm (late nights Friday till 10pm)/regular ticket price 14.50 euros
legrandmuseeduparfum.fr

Category: News
Tags: Paris, Le Grand Musée du Parfum, perfume museum
RECENT POSTS
CHECK OUT:
LATEST FROM OUR SHOP
Follow By entering your email address you agree our blog partner (BlogLovin) sending you emails with our latest blog. You can always unsubscribe. We do not pass your information to anyone else. See our privacy policy.