Every year, IFRA [the International Fragrance Association] hold a Fragrance Forum, bringing together scientists, perfumers, press and all industry professionals who share an interest in the subject of scent. This year’s forum took the theme of ‘Do You Smell Well?’ with a full day of talks covering the ancient Egyptian’s use of incense and perfume in magical rites through to how babies learn to smell and even a wine-sniffing session.
Discussing therapeutic aspects of fragrance and perfume materials, a number of eminent speakers addressed these topics with gusto and as always, it was fascinating to mix with such a variety of professionals who make the study of how – and why – we smell, their life’s work. 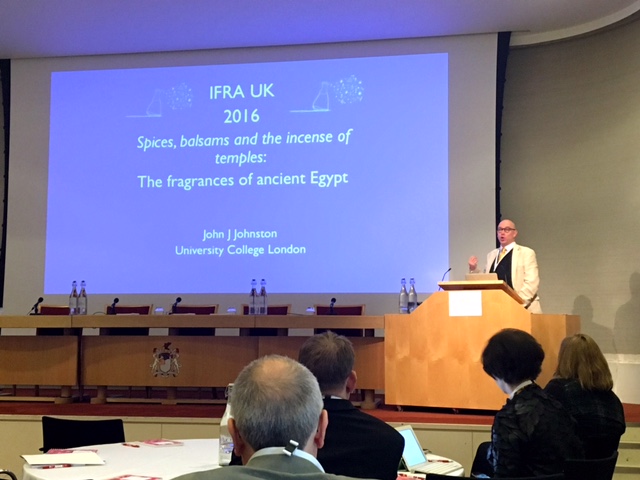 In the distinguished setting of The Royal Society, we began the day with an historical look at spices, balsams and the incense of temples: the fragrances of ancient Egypt – the Egyptologist and raconteur John J. Johnston from University College London perhaps being familiar to some of you who have seen him speak at Egyptian-themed events with Odette Toilette. Among any number of fascinating tales, we learned how incense was made to specific recipes, with each ingredient serving a magical purpose as an offering to the gods. Stunning perfume recipticals survive, mostly of mystical beasts sticking out their tongues – ‘To wear perfume is as though to be licked by these magical animals.’ 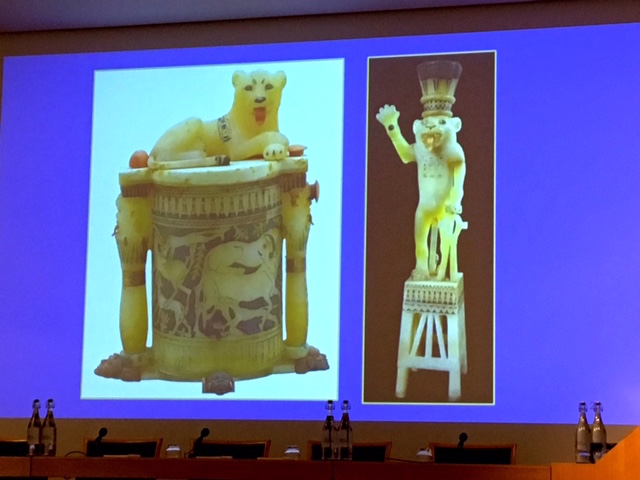 Dr Benoist Schaal from the Centre des Sciences du Goût, Djijon, addressed the audience with a talk entitled ‘Born to smell and smook‘ – “smook” being the way newborn babies smell and look while suckling at their mother’s breast, it turns out. A fascinating series of scientific studies were recounted, in which Benoist and his team have researched the way we are born to react to smell – that some odours do not need to be lerned and mammalian females have evolved the specific ability to highlight their breasts to their offspring by secreting a smell map around the nipples, to guide the babies directly there. 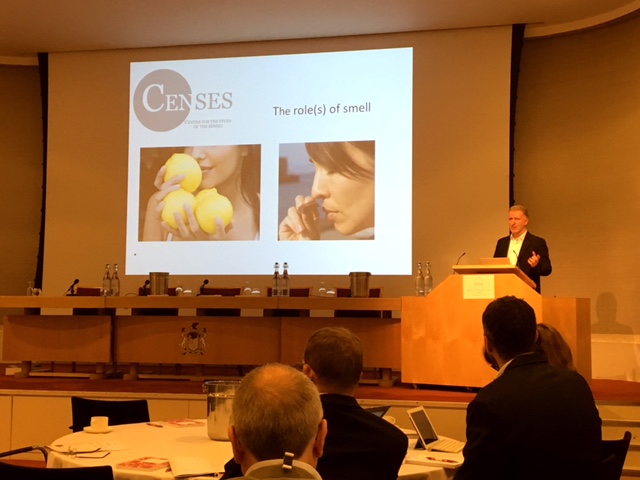 The next talk took a deeper philosophical topic of ‘the role of smell in consciousness‘ – Professor Barry C. Smith, Director of the Institute of Philosophy – Centre for the Study of Senses, argued that we don’t merely have the five (or six) senses usually attributed to humans – we could in fact have over twenty senses, each of them highly connected and overlapping with the rest. Smith went on to remind us that, historically, we have neglected our sense of smell as being the least important sense, but in fact it adds to and shapes almost every aspect of our lives! We were thrilled to hear this talk, most especially as it confirms everything we teach in our How to Improve Your Sense of Smell Workshops, and have had such great feedback from those who have taken part. 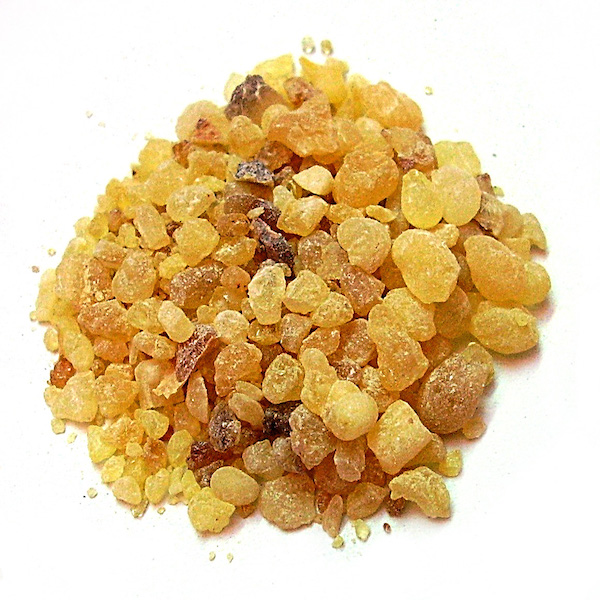 Dr Mark D. Evans of De Montfort University, Leicester was making sense of frankincense – beginning with a truly “lightbulb” moment where he explained how this historically important perfume ingredient got its name: French incense – franc encens. Of course it makes perfect sense when it’s pointed out, but had never occured to us, previously! Herodotus wrote of frankincense in th 5th century BC, Pliny wrote how the Phoenix feasted on it, and in Roman Britian alone, up to 50 burial sites of wealthy citizens have been found to contain traces of frankincense, thought to be used in funeral rites. Indeed, frankincense has always primarily had a religious use, but we were astounded to learn the postive research results currently being investigated on its incredible anti-inflammatory properties, and possible future use in many medical treatments, including some cancers. 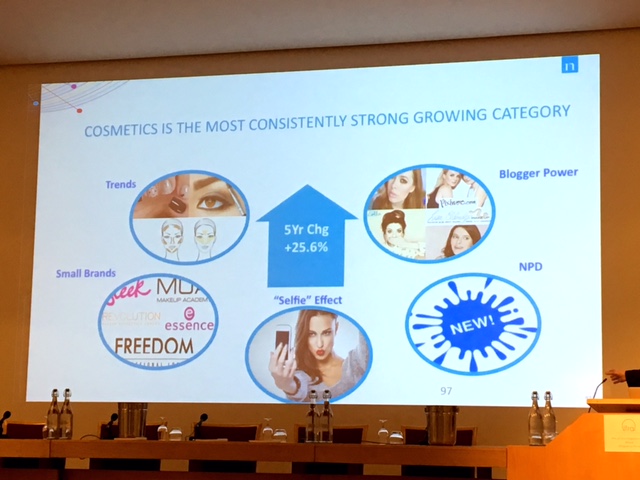 An insightful look at the state of the nation: shoppers and fragranced products followed, with Vitaliy Zhyhun from market research specialists Nielsen UK leading us through a series of charts, facts and figures that revealed the UK shopper is perhaps the most “disloyal” of all, shopping online and looking around for the best deals. Most interesting to us was their research that showed a huge swing toward smaller, independent or local shops – smaller brands also driving growth and far outperforming their larger competitors, and with online sales set to grow even more in the next couple of years. 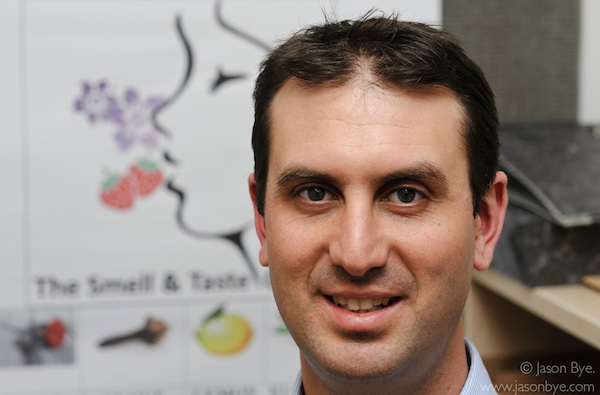 Mr Carl Philpott, Honorary Consultant ENT surgeon & Rhinologist and Director of The Smell & Taste Clinic at James Paget Hospital led a moving talk on living without smell, looking at the research they’ve done on those people who have lost their ability to smell, and the many psychological implications this has on their lives. Reinforcing how vital our sense of smell is and how little resepct we pay it until it’s lost; Philpott showed the shocking numbers of those patients who developed severe depression and feelings of alienation – and some of the ways they are trying to resolve or help them. In fact, he’s now working with Duncan Boak of Fifth Sense – a charity we have supported and highlighted, for those affected by taste and smell disorders. 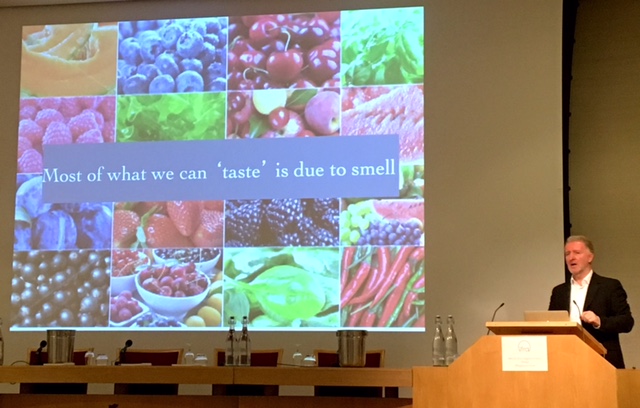 Finally, the always-welcome sound of corks popping heralded the return of Professor Barry C. Smith to the stage, guiding us through an olfactory exploration of wine – with our noses. Discussing the varying ways in which we perceive tastes (and mix them up with our other senses all the time – saying things smell “sweet” or “cold”, for example) and also relate smells and tastes to varying speeds… ‘Everyone in the world thinks lemons are “fast” and bananas are “slow”!’ chuckled the professor, as he also got the entire audience to identify the temperature of water, just by listening to a recording of it being poured. And the subtle but distinct difference between club soda, Champagne and prosecco being poured.
Who knew we had such hidden powers?
As ever, the IFRA Fragrance Forum left us with brains bursting from all the captivating information we’d taken in throughout the day, and noses a-twitch with a plethora of ideas of what to write about for future issues of The Scented Letter magazine…
Written by Suzy Nightingale

Category: News
Tags: babies, fragrance, Egypt, perfume, fragrance forum, scent, frankincense, history, IFRA, market research, science, senses, smell, wine, incense, talk, 2016
RECENT POSTS
CHECK OUT:
LATEST FROM OUR SHOP
Follow By entering your email address you agree our blog partner (BlogLovin) sending you emails with our latest blog. You can always unsubscribe. We do not pass your information to anyone else. See our privacy policy.