Powdery, silky and sexy in that seemingly effortless, so Parisian way, Goutal‘s just-launched Étoile d’une Nuit joins Tenue de Soirée and Nuit et Confidences in Goutal’s ‘Night Birds’ collection. For us, it embodies a sense of neglieés and déshabillé dressing room glamour via rose, iris, a kiss of raspberry and swooningly soft leather.

Continuing our shameless revelling in the be-ribboned boudoir theme of our recently published magazine, The Scented Letter, ‘We’ll Always Have Paris,’ it was an honour to sit and speak with Camille Goutal and perfumer Isabelle Doyen, to discuss the inspiration and creation of this scent, and to ask if they shared any memories – as we certainly do – of that childhood longing to be grown up and glamorous; lusting after dressing tables and their mysterious contents. 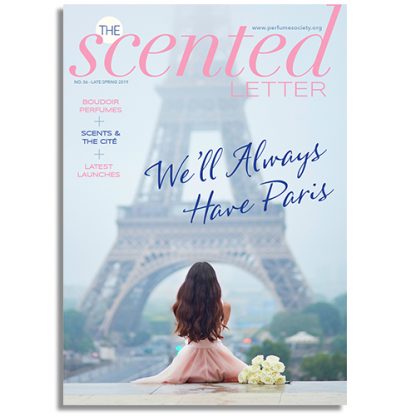 Our discussion revealed the most poignant perfumed memories, for Camille, of her mother Annick; and the sweetest memory for Isabelle, when she believed grown up, glamorous women could naturally create a cloud of scent at will…

Isabelle Doyen has watched Camille Goutal grow from the young girl who delighted in daring to wear heady perfumes she created, and dressing up in her glamorous mother’s leopard print shoes; to successfully stepping into those shoes many years later, when Annick Goutal sadly passed away and bequeathed the now world-renowned perfume house to her beloved daughter. It’s so much more than a working relationship, and when they talk it feels like family. The fragrances, too, are extended family members, it seems, and inspired by precious memories…

Camille: ‘Most of our fragrances are constructed by the inspiration of memory, that’s true, and so vital for Goutal – they all have roots in experiences we draw on for the creation. This one differs slightly because for its creation we imagined the woman first who would wear it. For Étoile d’une Nuit we wanted to go back to a certain type of woman who’s sexy in her own way…’

Camille: ‘Yes, perhaps it’s Petite Cherie who’s now grown up into a bit of a starlet.’

Did they think there was a comeback for more feminine fragrances, in a market that’s seen so many ‘shared’ or ‘genderless’ fragrances of late?

Isabelle: ‘We do have a lot of mixed fragrances in the house but yes, I think this is more overtly feminine.’

Camille: ‘My mother launched Eau d’Hadrien and it was one of the first gender free fragrances I think, but yes here we wanted to celebrate the power and confidence of femininity. I see in my own daughters how different they are, the oldest is very confident and knows her own mind, she’s just like ‘here I am!’, the younger is lacking in confidence because she’s still finding out who she is.’

Isabelle: ‘It’s interesting now in this Instagram age, because I see my own daughter following these beautiful models, and she wants everything they have. So she’ll say, ‘Mum you need to go to Victoria’s Secret and get me this perfume because it’s what she’s wearing!’ So you know, I go and get them, but every time she comes back to wearing Petite Cherie I’m very glad to say!’ 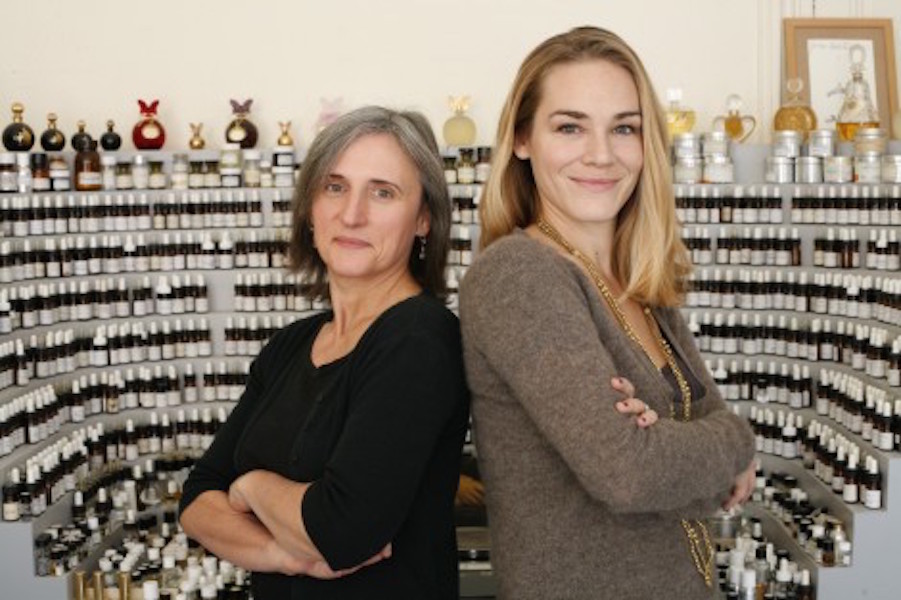 At The Pefume Society, we were already obsessed by fragrances as children (you will be unsurprised to learn), so was it the same for Camille, growing up surrounded by them?

Camille: ‘Fragances were so part of my everyday life that they weren’t as mysterious as lipstick, for example. I dared wearing very heavy fragrances when I was young, but my mother told me I wasn’t allowed to wear lipstick. And of course what’s forbidden is always more exciting…

I remember stealing my mum’s lipstick and trying to put it on, but ended up smearing it halfway across my face, and then putting my tiny feet in her leopard print shoes – slipping around in them, trying to be her. When my mother and Isabelle where creating Grand Amour she would wear so much of it around the house, you could smell the trail of her – and I have this particular image of my mother wearing that perfume whenever she went out for a glamorous occasion or special meal, so the excitement of the occasion was bound up in the smell of that scent.

Usually she wore fragrances that she and Isabelle were creating but one day she tried wearing Estée Lauder Youth Dew – and it was a nice scent but it wasn’t HER. She did also sometimes wear Guerlain fragrances, and I liked those on her, she loved those. She was just this very glamorous woman, the kind who walked into a room and all eyes were on her. I remember seeing men’s jaws drop, and realising the power of the overall impression you give – the clothes and attitude, yes, but also what you leave behind… that trail of perfume.’

Isabelle: ‘It was a very different experience for me, because my parents weren’t at all in the perfume world, so I had no knowledge of fragrance or what it was, growing up. When I was six years old we lived in Tahiti, and there, nobody wore perfumes during the day because it was so hot, it just wasn’t the culture.

One day, my mother went into the dressing room before an evening out, and came out with these red Helena Rubenstein lips. But what I remember most is her emerging from that place with… something around her. I asked my father, ‘what IS that?!’ My mother laughed and said ‘Oh, that is my perfume’. But I didn’t know what that was. I thought it was because she was a grown woman and somehow had naturally exuded this incredible smell – perhaps this was something all grown were able to do?

And then one day her equally glamorous friend came for tea. She was wearing red lipstick and huge earrings too, and had this… something around her. And so I asked again, what is that? And she also laughed and said it was her perfume. For some time I imagined that when I was a grown woman I’d be able to make this gorgeous smell just magically appear. Many years later I found out the ‘somethings’ were either Guerlain Mitsouko or Rochas Femme for my mother, and Miss Dior for her friend. And that they didn’t just magically appear from a woman’s body – they had been created by someone. 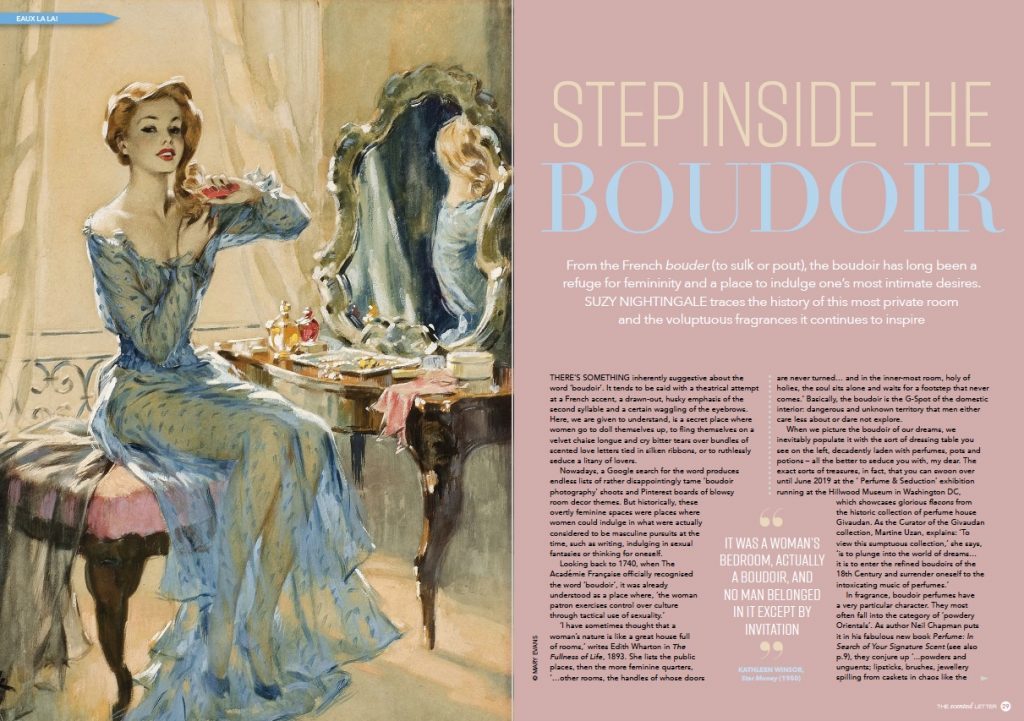 Fascinatingly, for my boudoir-themed feature in the latest edition of The Scented Letter Magazine, named We’ll Always Have Paris, and before this interview took place, I’d chosen not only Goutal’s Etoile d’Une Nuit, but also looked back to Guerlain’s Mitsouko and Rochas’ Femme for inspiration. Clearly, there’s something in the DNA of these fragrances that echoes through the ages as a kind of unrestrained, confident femininity; found in the pots and powders, frills and furbelows of a woman’s most private, perfumed lair. 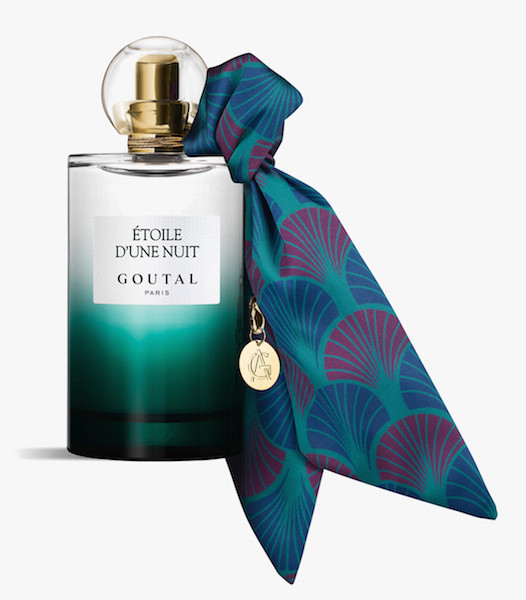 Categories: Slider, Just launched, News
Tags: fragrance, perfume, scent, Annick Goutal, Goutal, Camille Goutal, Isabelle Doyen, Etoile d'une Nuit
RECENT POSTS
CHECK OUT:
LATEST FROM OUR SHOP
Follow By entering your email address you agree our blog partner (BlogLovin) sending you emails with our latest blog. You can always unsubscribe. We do not pass your information to anyone else. See our privacy policy.