The house of Goutal Paris have been celebrating an incredible forty years of fragrancing the world – their scents from the get-go regularly among most-often mentioned in glossy magazines as being worn by celebrities, and their gender-inclusive, forward-thinking fragrances helping to revolutionise the perfume industry before ‘niche’ was a description on anyone’s lips.

Annick Goutal dedicated her early life to playing the piano, with the dream of being a pianist, but turned, instead, to a differing dream that had been denied to her early on – creating fragrances and opening her own perfumery. That dream, as we now know, became a reality, and her legacy lives on through her daughter, Camille Goutal, and Isabelle Doyen – the perfumer who helped shape and bottle those dreams for both mother and daughter.

And it’s quite some legacy. Indeed, I remember the moment my nose woke up in the late ‘80s. I was on a perfume shopping trip in London with my mum, sniffing everything. I came across a bottle of Goutal Eau d’Hadrien and my eyes lit up, it was so vibrant! Unlike anything else I’d smelled. Many years later, now a fragrance writer, I took a trip to Paris with two other journalist friends. We made a beeline for the Goutal boutique on the Rue de Castiglione – it was like walking into a contemporary cathedral of scent! And smelling Eau d’Hadrien again, it was as fresh and new as that first time. It made me smile. I felt like a child in a sweet shop again.

Funnily enough, sweet shops feature in the inspiration behind the iconic Goutal bottles and luxury packaging, just one of the insider secrets I learned while listening to Camille in discussion with the brilliant nose, Isabelle, who’s had that longstanding and deeply rooted working relationship with Goutal since 1985. I could quite honestly listen to these two woemn talk all day, but that would fill a book, and you can learn much more about their history in our page dedicated to Goutal Paris; so, for now, here are a smattering of some of the choicest treats from their fascinating and so-insightful conversation that revealed scented secrets behind the perfumes, where the inspiration for the ribbons came from, and even a battle with Elizabeth Taylor…!

Camille Goutal: ‘My mother wasn’t meant to be a perfumer, but there were very few female perfumers in the 1980s. My grandfather was very strict and decided he wanted my mother to be a chemist. Mum rebelled as a teenager and went to London to become a model but got bored of that and came back to Paris. She sold prints in a little shop and wanted to fragrance them – and this is how she first met the world of perfumery. The brand is like her, she was beautiful and full of emotion, sensitivity, but with no compromises. She wanted to make people dream, to make them happy with fragrance. For Eau d’Hadrien, she was inspired by the Emperor Hadrien and his travels through the Mediterranean.’

Isabelle Doyen: “She was always telling me about the cypress brances she loved to crush and smell the leaves of. If you think of ‘dHadrien you can really smell the cypress, a fizziness of citrus with mandarin, but also the woodiness. When it was launched, you really didn’t have any niche brands!’ 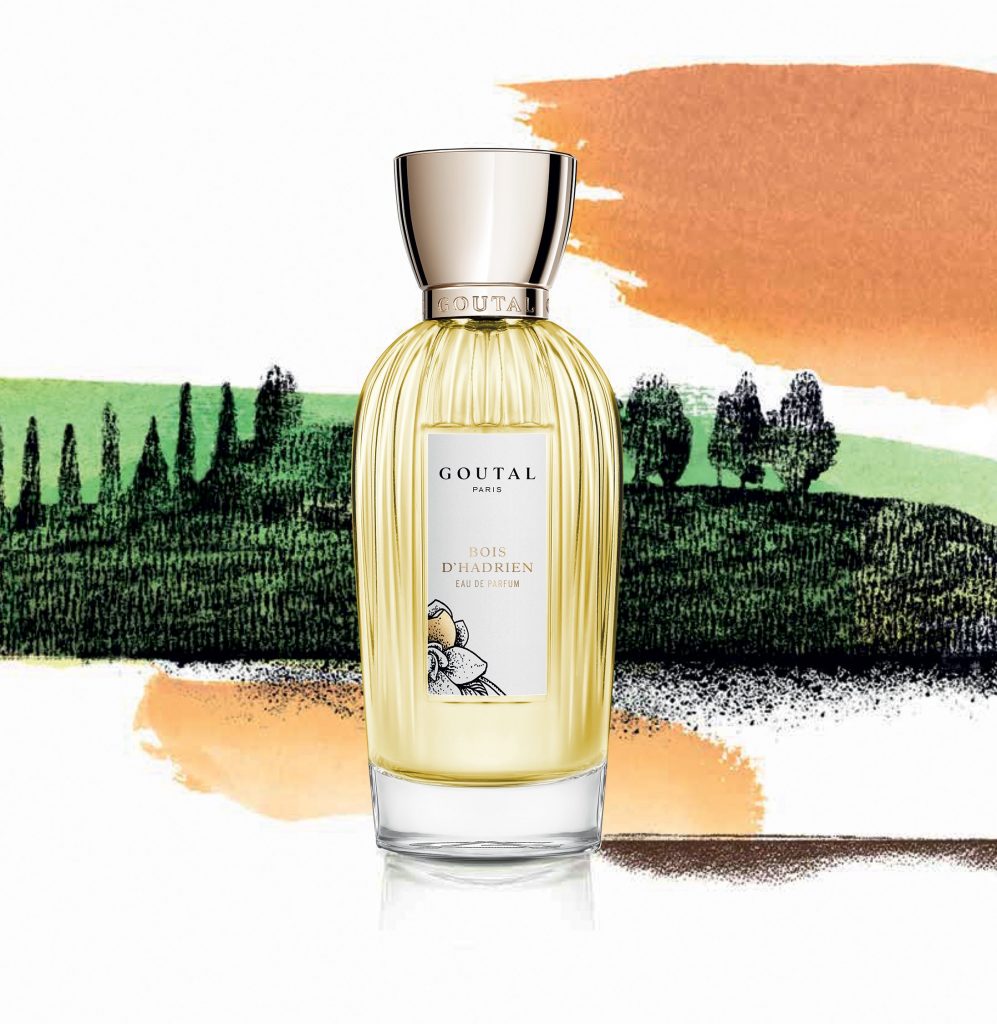 Camille: ‘The second shop my mother opened, was on the Rue de Castiglione. My mother would take me to Angelina (a tea and chocolate shop) at teatime when I visited, along with Isabelle. I have such happy memories of these trips. Emotions and memories are at the heart of the brand. My mother created fragrances inspired by love – the main source of her inspiration – and happiness. She found happiness in her life, I could hear her laughing with Isabelle all the time!’

Isabelle: ‘We had such fun together, to me these are ‘smiling perfumes’.’

Camille: ‘Absolutely! There was always fun, and adventures… One time my mother travelled to New York to defend her ‘Passion’ fragrance against the one Elizabeth Taylor had later launched, with the same name. In fact this trial made my mother famous in America because she won the case and it was reported in the newspapers!’

‘The bows on the first and the anniversary bottles were another wink to the past – my father was a chocolatier and at Christmas and Easter he’d get in coloured velvet to tie around the boxes, so I’m sure my mother was inspired by that. Petit Cherie was the name my mother gave me, and I recently found that it was also the name my grandfather called her – I discovered letters to my mother from my grandfather, which all began ‘To my petit Cherie…’ The Petit Cherie fragrance she made for me is actually a younger version of Ce Soir Ou Jamais. They are so important to me, these connections, these threads.’

Isabelle: ‘That thread carries through. It was really easy to work with Camille, right away, it was natural as she is so like her mother to work with. She’s been surrounded by perfume all her life. And after all, I watched her grow up!’

Categories: Features, Slider
Tags: fragrance, history, interview, Annick Goutal, Goutal, Camille Goutal, Isabelle Doyen, Goutal Paris, conversation, Inside the House of
RECENT POSTS
CHECK OUT:
LATEST FROM OUR SHOP
Follow By entering your email address you agree our blog partner (BlogLovin) sending you emails with our latest blog. You can always unsubscribe. We do not pass your information to anyone else. See our privacy policy.