When you’ve been obsessed by fragrance for some time, you might think you have a good idea about how ingredients smell. I reckon I’d know a patchouli or pepper from a few yards away, for example. But suddenly, presented with an array of natural ingredients in the form of a ‘Speed Sniffing‘ game, my sense of smell was turned upside down. And I wasn’t alone…

In the august surroundings of Burlington House in Piccadilly, the British Society of Perfumers met at the Royal Society of Chemistry, where we’d been invited for an evening of exploring fragrance ingredients by IFF-LMR Naturals. The LMR refrers to Laboratoire Monique Rémy, which IFF (International Flavors & Fragrance) took over in 2000, continuing and evolving the incredible, groundbreaking work Monique began. Indeed, the company have recently rebranded with the slogan Pioneering Nature – a phrase that encompasses their ethos of always pushing the boundaries of what we can expect from natural ingredients: the way they are grown, harvested and processed; the wellfare of the those who produce them, and sustainability of the environment at large.

These natural ingredients go on to be used by the world’s top perfumers and flavourists, in every major and niche fragrance house you care to name, and there’s no doubt you’ll own many scents and have eaten all manner of foods that include them. 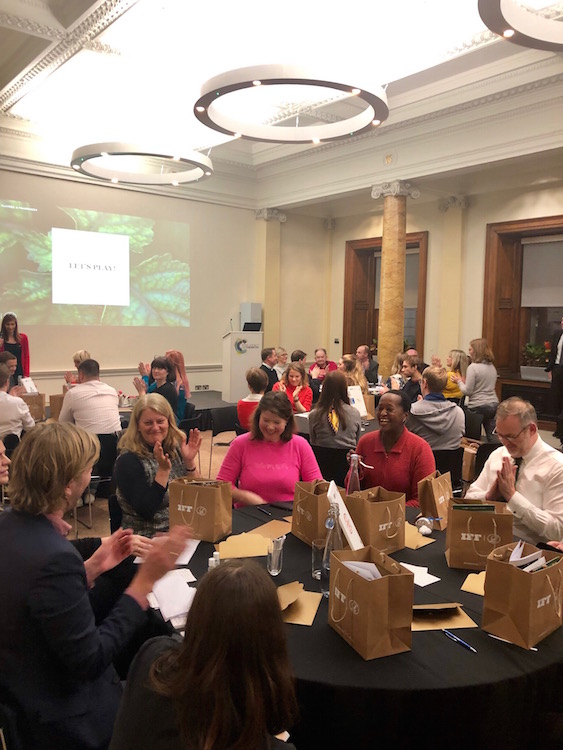 Esteemed members of the BSP mingled with representatives of IFF-LMR and fragrance-loving members of the public alike, and we were led into a room of eight tables for the fun to begin. Think of it as a combination between speed dating and an intense gym workout for your nose.

In groups, we moved our way around the room, being given only five minutes at each table – a bell ringing when time was up – and with an expert from IFF-LMR in place to guide us through what we were smelling. My group began at the ‘New Ingredient‘ table, and we first had to solve a word puzzle to make up the names. These were Pepper Sichuan Absolute Extract LMR and Cocoa Extract 12% PG. We might think of pepper as being punchy, up in your face and almost aggressive in character, but here we smelled something more reminiscent of citrus, with a vibrant, fruity/floral facet that astonished us all – and remember, there were professional ‘noses’ at this table, equally enthralled by what we were smelling. It was a tickle to the senses, and unlike any pepper I’ve previously experienced. The cocoa, too, was a revelation. Usually used in the flavour industry, this one is silky, nutty, warm and dry rather than overly sweet and sickly. 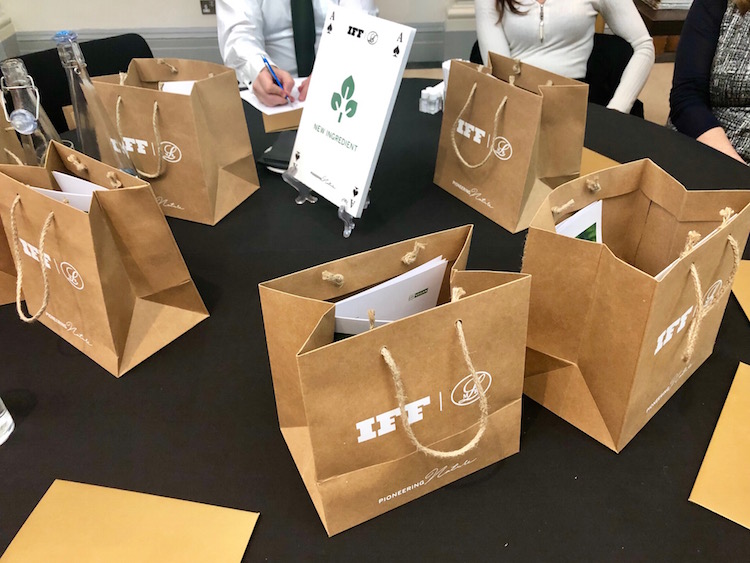 Resisting the urge to suck the blotter, we moved on to smelling fragrances – one without the central ingredient, one with, and this process was repeated at each table we visited. How fascinating to explore the way even a minute amount can utterly alter a finished fragrance – adding complexity and elegance, boosting the surrounding aromas or softening the edges for a comforting snuggle of a scent. I can only liken it to the difference between a landscape painting completed in oils or watercolour – the scene might be the same, but the translation, mood and emotional response has changed.

At the beginning of the Speed Sniffing we’d been given a bag containing a notebook to jot down our thoughts, along with collecting specially designed playing cards at each stage of our fragrant journey, each card explaining the IFF-LMR ingredient and what makes it so special. So here, briefly, were my thoughts on what I found to be some of the most exciting ingredients we sniffed…

Organic Notes: Ginger Oil Fresh Madagascar ORG
Produced by hyrdodistillation, this smelled of all the piquant freshness of ginger root, without any of the earthiness or almost rubbery notes that can sometimes accompany this ingredient. Their secret? A far shorter time between harvesting and distilling.

Peru Balsam Oil MD
This is harvested from wild grown plants, and was the first to achieve ‘Fair Wild’ certification. For this, they must adhere to strict standards of sustainability criteria, ensuring the continued use and long-term survival of wild species, while supporting the livelihoods of all stakeholders and respecting their cultures. To me, it smelled of heaven. Soft, creamy, comforting and cocooning – if there was a vat of it, I’d have jumped in (though this could upset their certified status, so probably best for all concerned the opportunity wasn’t presented).

Healingwood BLO
This is patchouli with 99% of patchoulol (an alcohol found within patchouli, and one of the organic compounds responsible for the smell). But it’s not the patchouli you’d recognise – banish any lingering horrors of “hippie” scents, for this was an ethereal, wraith-like smell, a whisper of woodiness without the funk. 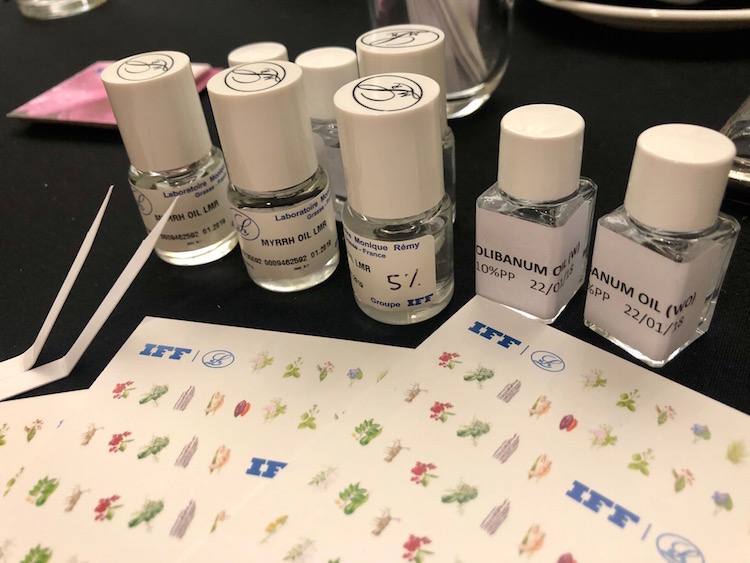 LMR Hearts: Patchouli Heart No.3
IFF-LMR’s best selling Patchouli Heart note, and it’s easy to smell why. There’s a silvery clarity that smells like bliss personified, with a touch more earthiness that the Healingwood, but it’s still not muddy. Think of a forest floor during a light Spring shower, water diffused through greenery, a shimmering transparency that’s used to ‘…bring differentiation and personality to any formulas.’

‘Blockchain’ Notes: Vetiver Heart
A Blockchain guarantees transparency throughout the supply chain, with every single step of a process being virtually stored. This way, an ingredient can be traced from being grown, harvested and processed from start to finish, with the information visible for all (other companies buying the product, right through to consumers buying a fragrance that ingredient has been used in). The Vetiver Heart we smelled was a revelation – fruity, highly complex, it was practically a perfume in its own right. Because of that complexity, if a perfumer uses this within their formula, it makes the finished fragrance far harder to copy. Win-win.

New Platforms: Sandalwood Oil New Caledonia
By ‘Platforms’, they mean new places in the world they’re now sourcing materials. Sandalwood has traditionally been sourced from Australia and India, where illegal distilling plants, smuggling and unsustainable usage have caused huge problems for the fragrance industry, and the legal growers and producers in those cultures. By using this astonishingly smooth sandalwood from New Caledonia, IFF-LMR offer a delightful new ingredient for perfumers to incorporate in their fragrances – the one we smelled had an almost milky, gourmand aspect to it. 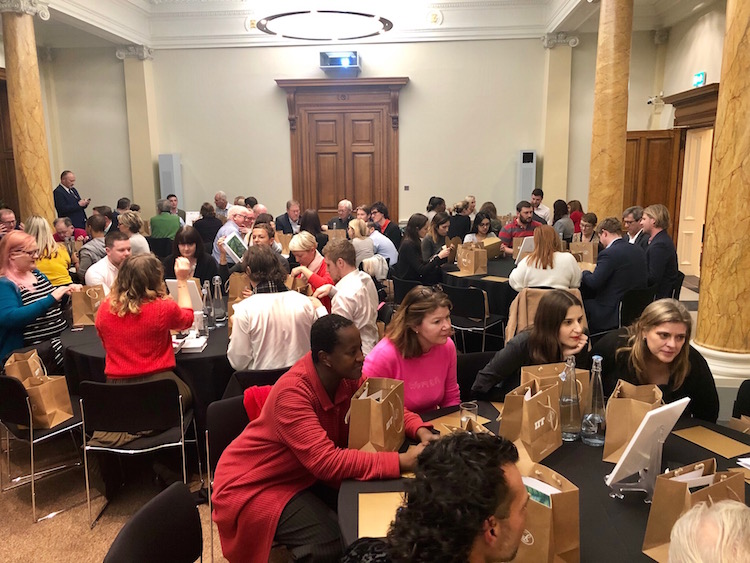 There are many more ingredients I could mention and swoon over at length, but suffice to say, we were all left with a buzz of excitement about the future for the naturals it’s now possible to use in fragrance, and with minds officially blown. What an honour to have smelled ingredients only the noses of major perfume houses usually get to play with. Speed Sniffing with IFF-LMR resulted in my relationship status with naturals being firmly reinstated.

Interested to smell more? The BSP offer a number of exciting events each year, so make sure you check the website for other fragrant happenings.

Wish you could have been there? Then you must join us at our Perfume Society Ostens Event on 12th February! Using IFF-LMR Ingredients, this future-forward house are revolutionising the perfume industry by offering some of these incredible materials in their highest allowable, singular form within an oil Preparation, or as hypnotically enticing eaux de parfums created by some of the world’s top perfumers around that central, natural ingredient. We’ll be smelling the ingredients, learning how they’re processed and sniffing the divine results…

Categories: Slider, News, Features
Tags: BSP, perfume, British Society of Perfumers, scent, Speed Sniffing, ingredients, smell, event, perfumers, raw materials, IFF-LMR, fragrance
RECENT POSTS
CHECK OUT:
LATEST FROM OUR SHOP
Follow By entering your email address you agree our blog partner (BlogLovin) sending you emails with our latest blog. You can always unsubscribe. We do not pass your information to anyone else. See our privacy policy.