Did you know that Floris has a long standing relationship with the founder of modern nursing: Florence Nightingale? And now, with Floris donating 15% of sales from her favourite fragance to the White Rose Appeal, fronted by Helena Bonham Carter, and having been recently featured in the drama series Killing Eve, it seems timely to nose further into this intriguing historical snippet…

Floris explain that this direct connection to perhaps the world’s most famlous nurse, can be found in a personal letter she wrote them.

‘Floris’ White Rose fragrance was a favourite perfume of Florence Nightingale, and in our Jermyn Street shop we display a treasured letter written by Nightingale in 1863 to “Mr Floris” thanking him for his “beautiful sweet smelling nosegays”. 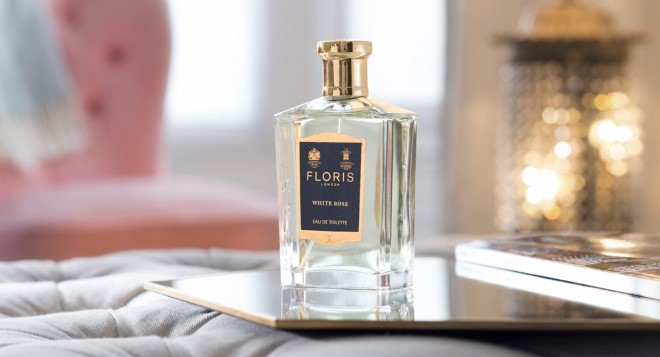 Alongside the White Rose Campaign, Floris have committed to donating 15% of all sales of White Rose Eau de Toilette to the foundation for a 12 month period.’

And oh! White Rose is a simply beautiful scent to wear, so what a wonderful way to celebrate Florence – and all nurses and midwives – most especially during this crisis. The fragrance itself is a couquet of velvety roses dusted with soft iris, swathed in warm amber and grounded with earthy musk. At once strikingly elegant and wonderfully confident, it’s something we shall be reaching now more than ever… 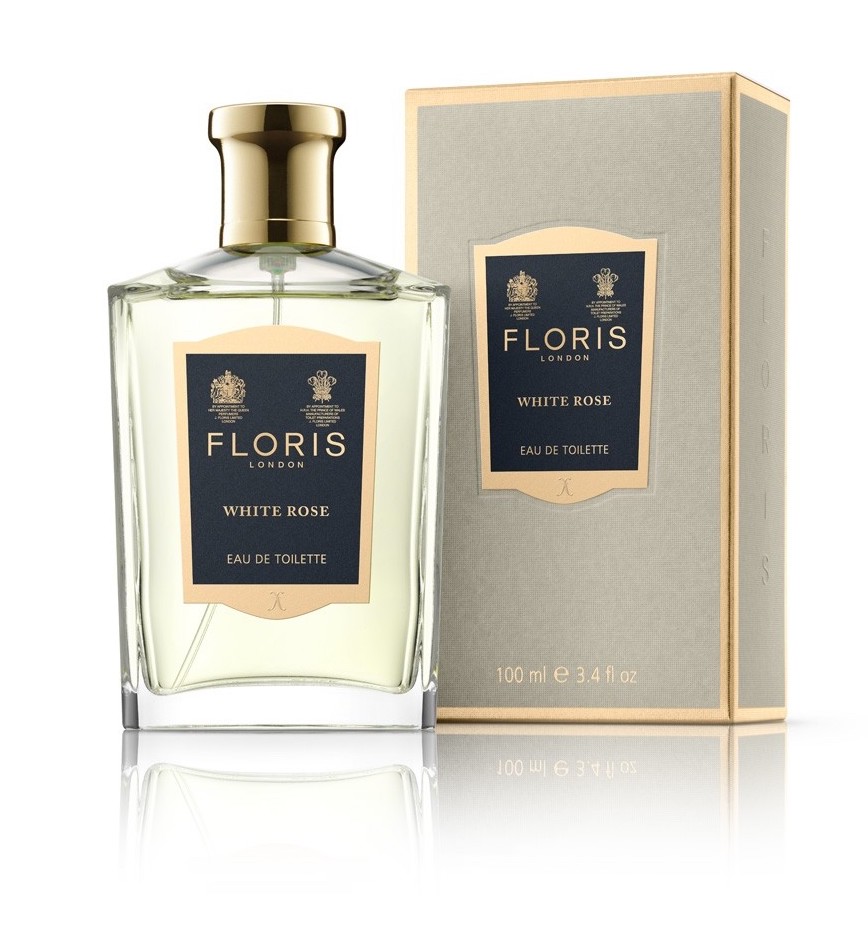 Floris continue: ‘The Florence Nightingale Foundation does amazing work supporting nurses and midwifes through its scholarships and has done so since its formation in 1929. This year marked a big year for the foundation, particularly today on the bicentenary of her birth.’

Sadly, due to the current situation, Floris say that ‘…Westminster Abbey was due to be filled with nurses for an annual service to mark Florence Nightingale’s birthday but was cancelled this year due to the coronavirus pandemic. In the current circumstances, the foundation launched a special programme to equip nurses and midwives with the skills to support the emotional well being of those working directly with Covid-19 patients and the owners of Floris have made the decision to team up with the charity to support their fundraising efforts. 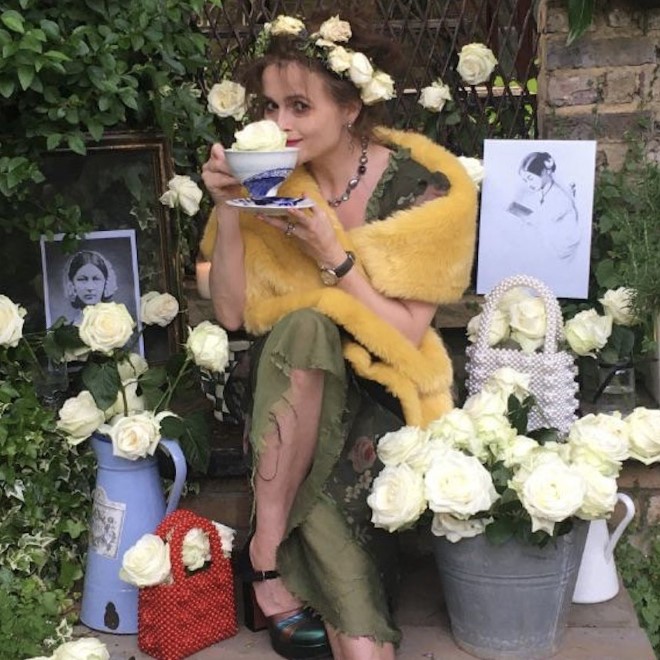 And so, in partnership with actress Helena Bonham Carter, the foundation have launched the White Rose Appeal, a symbol of hope and re-birth. You can support the Florence Nightingale White Rose Appeal by buying a special anniversary e-white rose in honour of a nurse or midwife who has helped you or a loved one at any point in your lives. Every white rose bought will go on to form part of an actual floral display to be created at Westminster Abbey when lock down comes to an end, marking and honouring the contribution of nurses and midwives everywhere.’

‘Buying a white rose is a simple way to honour our nurses and midwives. We must never forget the sacrifice they make on an everyday basis during this time.’

Fragrant fans currently glued to the latest season of Phoebe Waller-Bridge’s Killing Eve Netflix series have been treated to a peek inside lead character Villanelle’s favourite perfumery… which just happens to be the 89 Jermyn Street HQ of Floris!

‘I want to smell powerful. I want to make people gag with it,’ Villanelle tells the Floris perfumer dring her visit. ‘Can you do that for me?’ 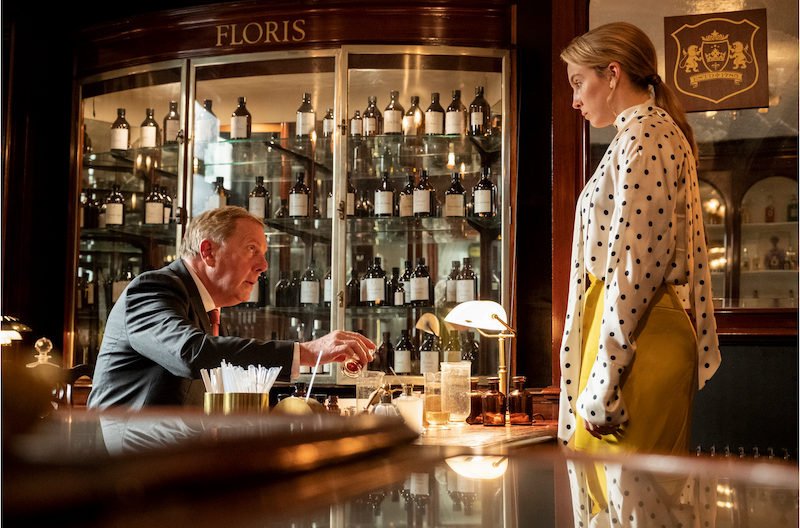 ‘…I want to smell like a Roman Centurion who’s coming across an old foe, who in battle once hurt him greatly,’ she continues. ‘But since then, the Roman Centurion has become emperor, and is now powerful beyond measure.’ The perfumer pauses, before tactfully suggesting: ‘Maybe something more… woody?’

I’m sure Floris’ perfumers receive all sorts of interesting bespoke comissions, but perhaps not quite so… unusual as this request!

You can read all about the time I was lucky enough to have my own personal perfume made by Floris in-house Perfumer Penny Ellis, here. But long story short: I didn’t mention Roman Centurion’s (or making people want to gag) in my brief… 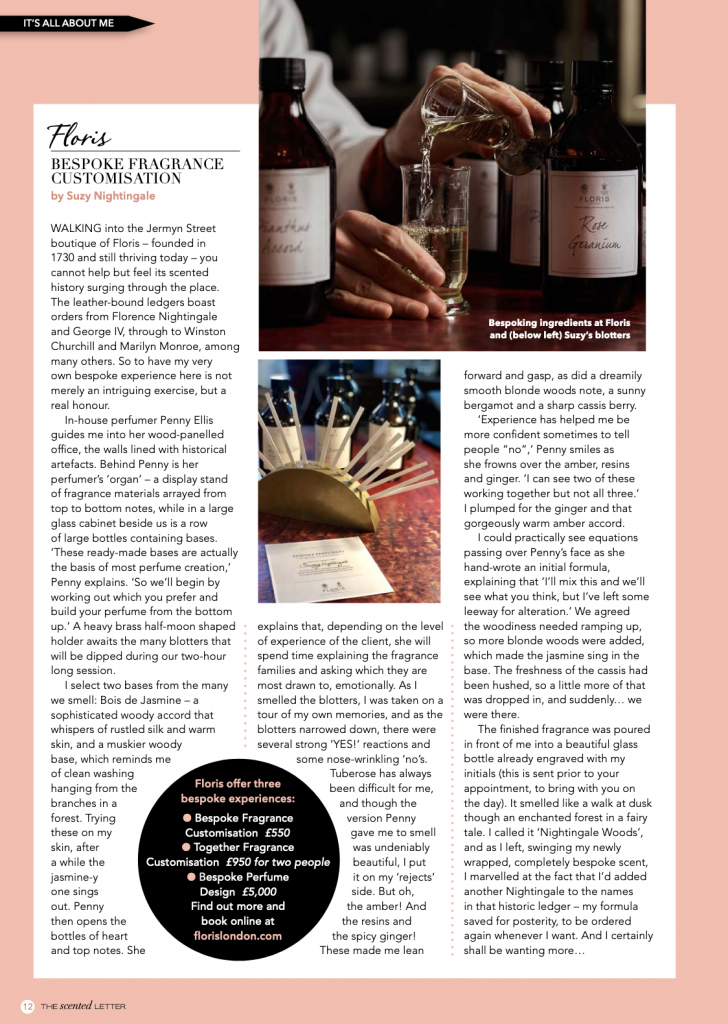 From Florence Nightingale (and their myriad famous customers from their archives) through to Helena Bonham Carter and now, Villanelle – Floris certainly has a diverse heritage and continues to thrive as London’s oldest surviving perfumery: something of which we can all be proud and will continue to support.

Now, Roman Centurians aside, what brief would you like to set a Floris perfumer for a bespoke fragrance when we can step inside those hallowed doors once more…?

Venturing out to explore the River Avon for their inspiration, the Floris perfumery team followed its meandering course as it begins in the beautiful, golden-stoned Cotswolds and as various tributaries merge, finalling flowing through Wiltshire on its way to the sea.

Edward Bodenham, Perfumery Director at Floris, spoke about their fragrant journey:
‘Historically we always launch our hand poured collection in late January, when winter is setting in but nature provides a few early signs of spring, particularly on our river banks. I love this time of year and whilst working on the ‘River Dawn’ scent with our team, it became clear that I wasn’t alone. Our rivers drive us on, providing tranquillity and uplifting our spirits, even in the harshest coldest winter, as the sun rises on a new day, they continue to shape our land, our geology, our industry and trade. They are a constant source of inspiration. 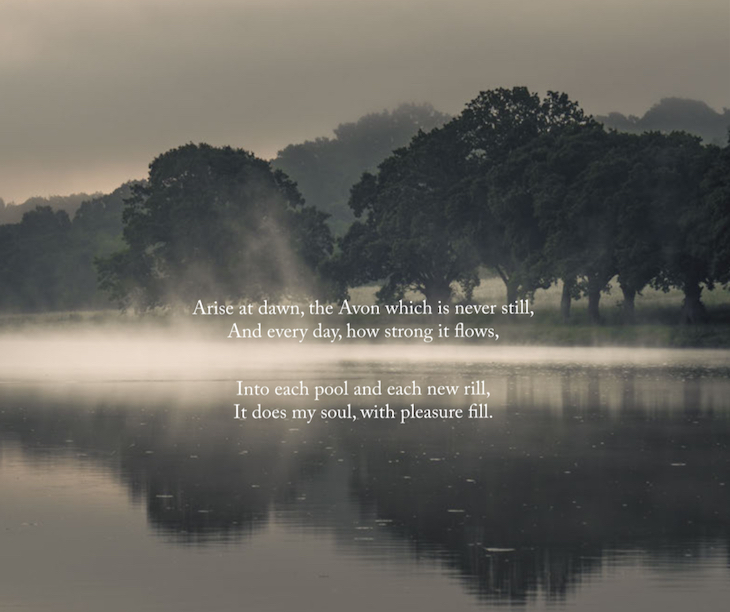 I recently walked along the banks of the Avon near Bradford Upon Avon. It’s a part of the world that for me encapsulates a huge amount of the beauty of our country. Interestingly our perfumer, Penny Ellis, who worked with me in creating this fragrance is a keen river swimmer who has swam sections of the Avon during these colder months which gave her huge inspiration when composing the scent.

We wanted to reflect the vibrant yet reflective tranquillity of flowing, shimmering water. How it feels to be in that raw environment. The natural beauty of the cold river bank, signs that spring is on its way as tea olives force through the cold, and snow drops appear in the shade of wooded forests, never far from the water. Most of all, we wanted to portray that emotion felt when rising before the dawn to see these landscapes completely unspoilt, before the world awakes. The river dwellers, fishermen, swimmers, rowers and those who still earn a living, working in harmony with its flow.’

Love at first sniff?
From the first spray, you’ll be transported to those gurgling tributaries with a crisp, galbanum freshness that speaks of green shoots bravely poking their heads above ground. Think fats buds just about to blossom, spiderwebs bejewelled with dewdrops, the cheering sight of snowdrops and hyacinths and a drift of spring’s first apple blossom in the air. Grounded with soothing sandalwood and delicately dusted with orris, this is the perect thing to wear when you want to celebrate that subtle shift in the seasons – not quite the end of winter, but good lord it’s almost in sight. A lightening of days and spirits, then, that make this a must-have (and a beautiful choice for any spring brides, we say). 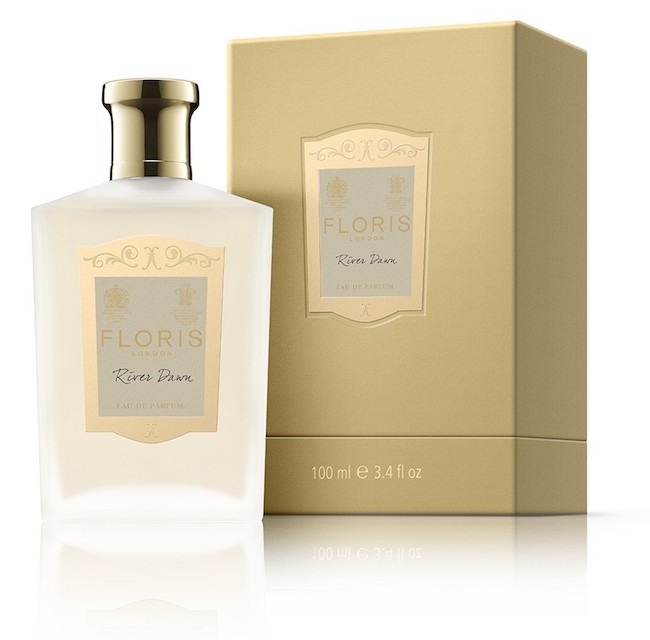 For the launch earlier this year of their so-sophisticated 1927 fragrance, Floris gathered together a curated group of guests to 89 Jermyn Street to celebrate the inspiration for the latest in their Fragrance Journal series, with two very special women discussing the rich and intertwined histories of fashion and fragrance… and we were thrilled to be present!

Scroll down to watch part of their fascinating conversation, and read our review of this stunning scent…

Dissecting nearly 100 years of social history in London, fashion historian, TV presenter and author Amber Butchart, former Vogue editor, author and journalist Alexandra Shulman, Floris Perfumery Director Edward Bodenham and Head of Marketing Alex Oprey explored how to bottle a moment in time. And now, Floris have released a video so you can watch along.

As part of their Fragrance Journals series, Floris created a very special time capsule, but exlained they wanted to make sure it smelled current and totally wearable for today – these are no museum pieces, but living homages to eras that have changed our world forever. The end of the 1920’s marked revolutionary new fashion movements, especially for women – cutting their hair short, smoking, dancing, partying all night and wearing loose-fitting, calf-length or shorter dresses that flirted with scandal. 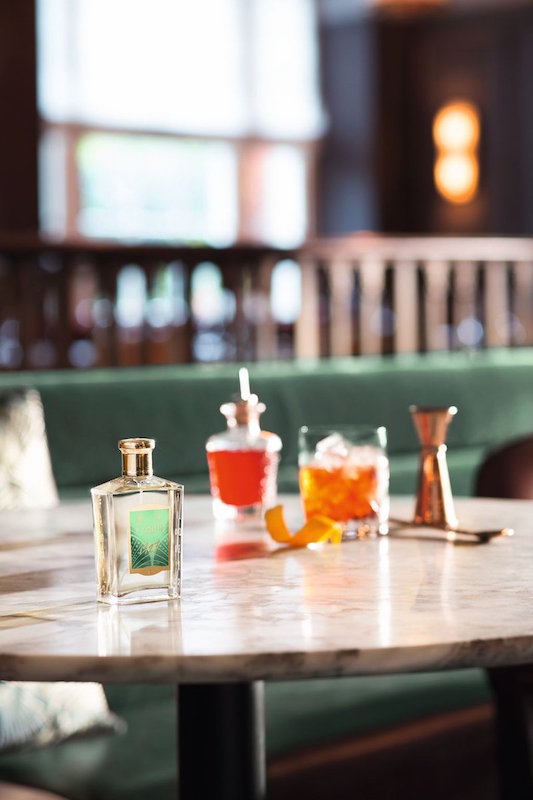 Floris say: ‘The Fragrance Journals are a series of unique Eau de Parfums, capturing the heart and soul of London throughout the decades of the 1960s, 1970s and 1980s and most recently the 1920s.

Each fragrance weaves and knits its way through the fabric of a key moment, district, and culture of the time, bringing out a true reflection of a city which has the ability to both adapt to change, yet remain rooted in its identity. A love letter to London, its social fabric and its people.’

Read on for our fragrant review… 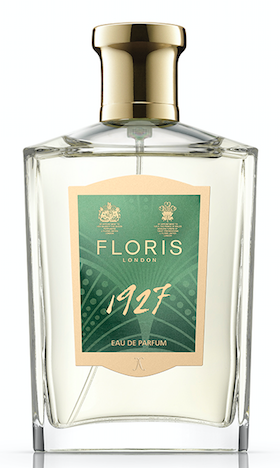 Floris 1927
1927 kicks off with a swing as aldehydes burst like champagne bubbles into bergamot, and we can almost hear the giggles as cocktails are carried to the drawing room. Bright Young Things in barely-there bias-cut silks swing their pearls, violet, ylang ylang, narcissus and mimosa sashay their way to dancing on the tables – and an oakmoss-like, vanilla-musk base adds to sophisticated high-jinks.
£140 for 100ml eau de parfum
florislondon.com

Categories: News, Slider
Tags: Floris, chypre, fashion, luxury, london, history, perfume, fragrance, 1927, Alexandra Schulman, Amber Buchart, Fragrance Journals, Vogue
RECENT POSTS
CHECK OUT:
LATEST FROM OUR SHOP
Follow By entering your email address you agree our blog partner (BlogLovin) sending you emails with our latest blog. You can always unsubscribe. We do not pass your information to anyone else. See our privacy policy.