Simply named Trudon, the new perfume line hailing from heritage-rich house of Cire Trudon, takes three of the world’s top perfumers – Lyn Harris, Antoine Lie and Yann Vasnier – and challenges them to new inspirations in fine fragrance. Taking the themes of religion, royalty and revolution, five fragrances reveal contemporary chapters: in each scent, one natural ingredient is allowed to take centre stage. Utterly intriguing, and completely sharable no matter your gender, we couldn’t wait to find out more…
Part of Cire Trudon’s collaborative ethos is to work with unique talents, promote creative freedom and showcase artisanal expertise. Handpicking three of the best perfumers was therefore a considered choice. And even the way they were given the brief was unique from the very beginning… As Trudon explain, ‘Individually given a brief by a sophrologist, each nose was taken to a Parisian landmark; chosen for its evocative meaning; each venue catalysed singular ideas and sources of inspiration.’
As one may expect from such a perfectionist design team, the attention to detail and harmony of the packaging is simply stunning. The 100ml bottles evoke the design of Cire Trudon’s scented candles. Created by Pauline Deltour, even the rippled-glass cap echoes the elegant silhouette of La Promeneuse, their diffuser that melts scented wax cameos in a ceramic dish over a candle’s flame.
But enough of the preamble, we wanted to get our noses stuck in! 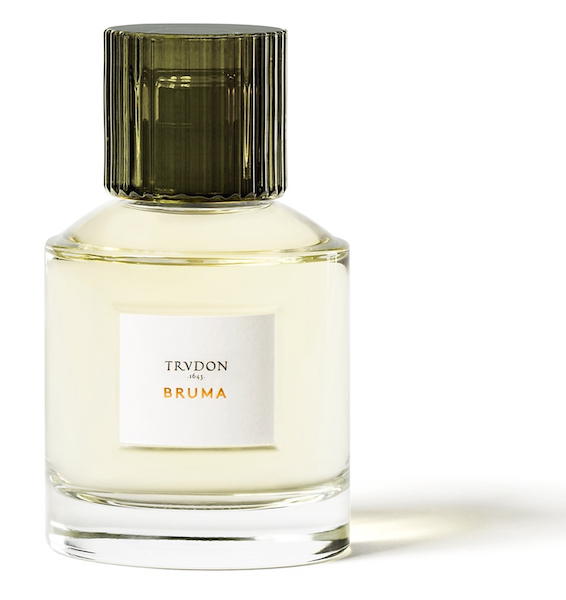 Bruma
Top Notes: black pepper, lavender, galbanum
Heart notes: violets, purple peony, iris, jasmine sambac
Base notes: labdanum, Haitian vetiver, tonka bean
Trudon say: ‘Bruma (“solstice” in Latin) is intrinsically tied to the sun. And to royalty. An icy solstice, Bruma feeds on the moon and the forest to evoke the inner metamorphosis of a character in contact with the nature surrounding her.’
Antoine Lie says: ‘A noble figure leaves the comfort of her rooms on horseback at night to discover a part of herself in another, nearly supernatural place. Her appearance is evoked by the notes that transcribe her femininity as well as her elevated rank. The rider crosses a clearing, passing from the half-dark into the nocturnal light, shrouded in mystery, enigma and a distinguished sensuality that is almost animal-like. Her beauty is suddenly revealed by a spiritual energy.’

Olim
Top notes: bergamot, lavender, anise
Heart notes: pink peppercorn, clove
Base notes: patchouli, benzoin, myrrh, musk
Trudon say: ‘Olim (Latin for “once”) recalls the first four registers of the old Parliament of Paris, including the numerous texts and laws delivered to the King’s court between 1254 and 1318 under different reigns, particularly St. Louis (1214-1270). Olim shines light on the evolution of royal power and the decline of 13th-century French feudalism.’
Lyn Harris says: ‘A spirit, a veil of elegance, and beauty… the scent is full of history. Better still, it has the power to reveal history. Cold notes, reinterpreted in a modern way leave a lasting impression in those around and purity on those who wear it.’ 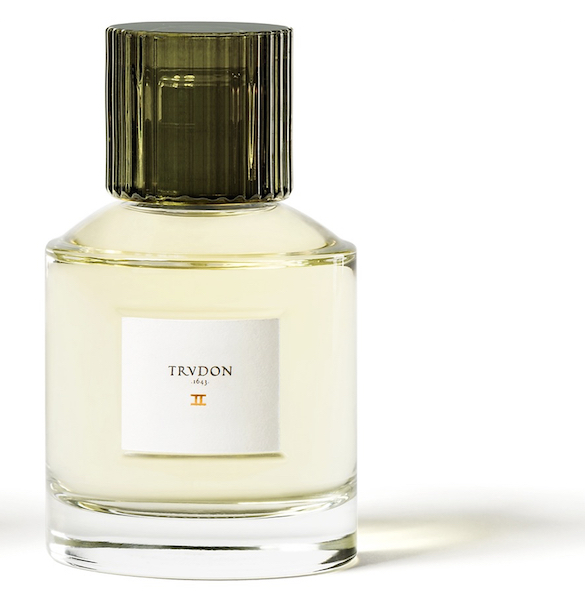 II
Top notes: green leaves, orange bigarade
Heart notes: pines, pepper, juniper
Base notes: cedar, incense, Ambroxan, Cashmeran
Trudon say: ‘II is the alliance par excellence, the unique link that ties two beings together. II transcends and calls to the pious, revealing its fragrance like an emerald impulse.’
Lyn Harris says: ‘This perfume’s vibrant greenery is a forest painting: pines, juniper and cedar covered in moss and berries on a damp, earthy floor.   is a modern take on eau de Cologne; a green, peppery scent with orange bigarade from Brazil. It’s something for everyone that unites and brings two people together.’ 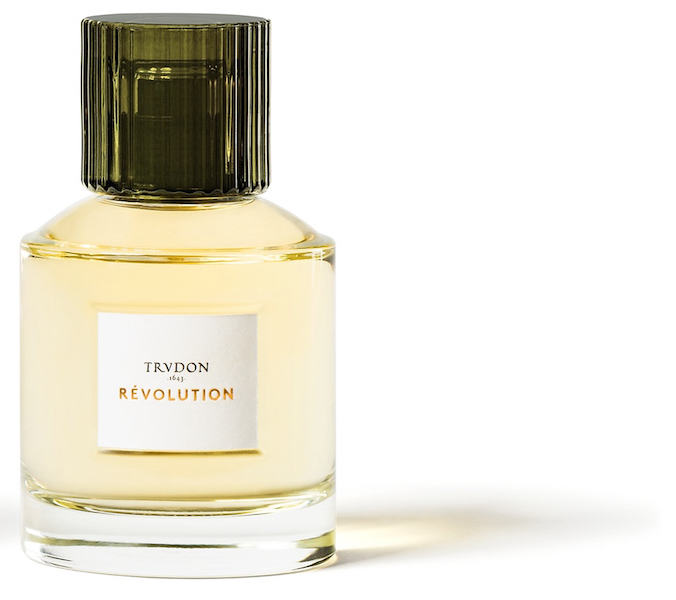 Révolution
Top notes: elemi
Heart notes: angelique
Base notes: cedar, papyrus, patchouli, cade, incense, pure cistus, opoponax
Trudon say: ‘The streets of Paris during the French Revolution, an odour of smoke and musket powder. Rage and intense emotions on the faces of the crowds. Houses are afire, the cobblestones awash in oil, sweaty riders are robed in black leather. A touch of incense softens the air, suggesting peace is near.’
Lyn Harris says: ‘Révolution captures a moment in his- tory, a period when smells were raw and prevailed everywhere. History is alive in this composition where smoke, wood, leather and incense reign. Yet modern elements in the formula let the scent breathe. A form of harmony is born out of these contrasting notes, leaving an elegant, clean, smoky wood-scented backdrop that remains on the skin.’ 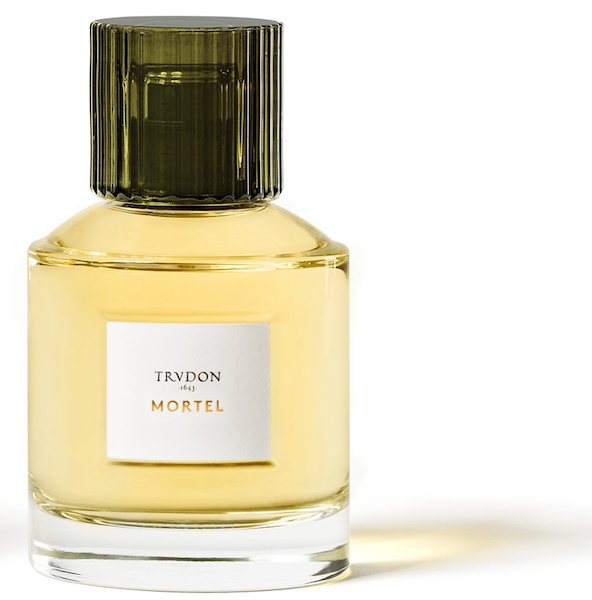 Mortel
Top notes: black pepper, pimento, nutmeg
Heart notes: Somalian frankincense, Mystikal, Virginia cedar
Base notes: pure cistus, myrrh, benzoin
Trudon say: ‘The artist, living between shadow and light, is a mortal creature. Halfway between the religious and the revolutionary, with an unquenched thirst for eternity, Mortel is a revolutionary drive that combines virile force and natural harmonies. A fatal attraction.’
Yann Vasnier says: ‘A winter’s night. A heavy metal door opens on a huge room. A man appears in the distance; intense heat and light are pulsing from a forge. Light is reflected on the skin and gestures of this man, who is engaged in a rite: standing in front of the blaze, his eyes seek a form buried in the magma before he can recreate it in the open air. The furnace throws giant, moving shadows. In the midst of his activity, sleep finally overcomes the fiery eyes of the artist-craftsman.’
We say: This is a perfume collection we’ve been waiting in fragrant anticipation for ever since we first heard about them, and suffice to say, we weren’t disappointed! Remarkably refined, characterful yet with restraint, these are scents to see you through the seasons and to be fully explored by trying them all on the skin. With such a stellar line-up of noses behind them, and Cire Trudon’s history, it’s hardly surprising the frgrance world is going gaga for them…

‘Sunshine and showers’ seems to be the phrase most often escaping the lips of weather-forecasters of late – yes it may be fully Spring time in the UK, but sunshine is most definitely not guaranteed. Thank goodness, then, for the consistently stylish scented offerings from Cire Trudon (who know a thing or two about candle-making, having been at it since 1643) – the latest being ‘Cyrnos‘ (which translates to ‘Corsica’ in Ancient Greek), presented in the most sunshine-y yellow glass holder we think we’ve ever seen, it truly seems to glow before it’s even been shown a flame. From the vibrant colour, you may imagine it to be a highly citrus-fragranced affair, but read on, for all is not quite what it seems…

Cire Trudon say: ‘Between 1850 and 1914, the French Riviera was the place to be for the intellectual and political elite. Ruling families, intellectuals, aristocrats and artists travelled there there to enjoy the practically guaranteed sunshine during there during the winter.

Empress Eugenie, Napoleon the 3rd’s widow, fell for this small corner of paradise. In 1894, she built a villa – named Cyrnos – in Cap Martin, located near Monaco. The name was a tribute to the Bonapartes’ homeland, her late husband’s family. Drenched in sun, and overlooking the Mediterranean Sea, the villa is set in an idyllic stage. The limestone rock made the garden’s construction particularly difficult, only achieved through strong will, and lots of dynamite. The Empress’s ambition was to create a park that looked as though it had always been around. Cyrnos, Cire Trudon’s latest creation conjures the solar beauty, the dazzling scent, and the art of living in this truly unique place.’

With her penchant for landscapes harbouring contrasting plants and their multitudionous scents, the Empress finally achieved this vision: mature pine, olive, and palm trees fringed by wide-ranging flowerbeds full of colour amid the arid landscape typical of the region. The smell of cystus, myrtle, mastic, and rosemary fill the air, mixing with the lavender blooms carried from the garden. Though she lived mostly alone, the Empress hosted any number of prominent monarchs at the time, such as Queen Victoria, as well as avant-garde intellectuals types like Jean Cocteau.

Gorgeously vibrant and uplifting, the sunshine is captured in Cyrnos not through the obvious choice of citrus, but with sun-warmed herbaceous wafts of loveliness that follow you around the house all day, and have us wishing for a personal invite to that all too tempting-sounding villa itself…! 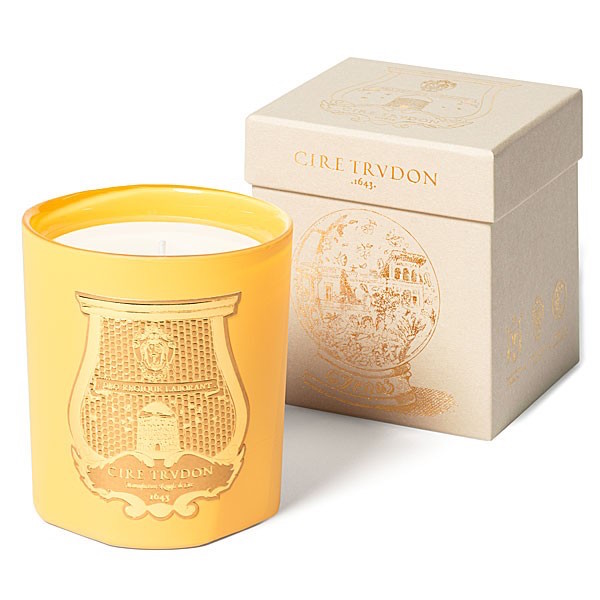 La Promeneuse by Cire Trudon is a brand new way to diffuse fragrance in the home – or even outside – and has to be one of the most stylish (and innovative) decorative objects for this purpose we have seen for quite some time. 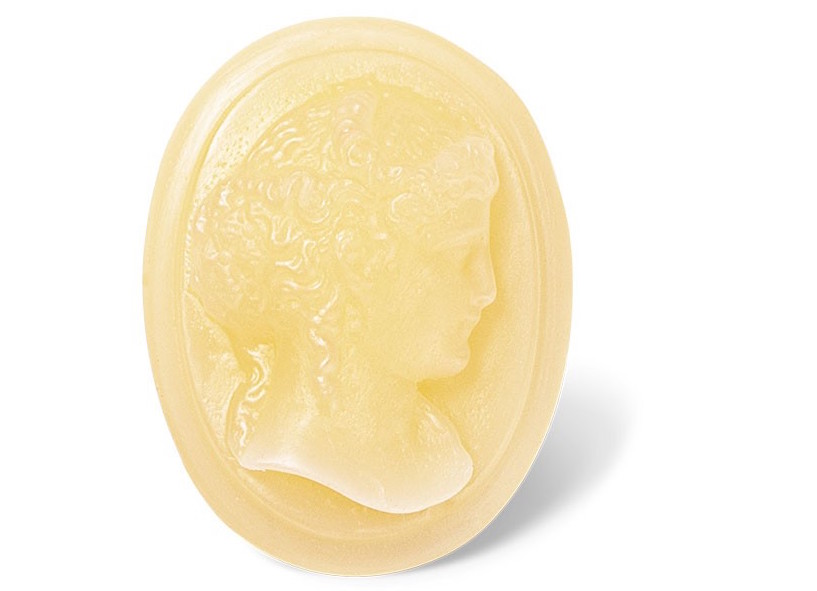 Placing the cameo onto a specially made brass ‘spoon’ that rests atop the ceramic dish, the glass cylinder is then lifted to revel the tea-light within. Once lit and the glass replaced, the cameo begins to gently warm and finally melt into a pool of molten, scented wax. We particularly like the fact that although the burn time of the wax cameo and the tea-light beneath is approximately eight hours – you can halt the process at any time, so choose to burn for ten minutes, an hour or the full amount – it’s entirely up to you. Perfect for those times you want a quick hit of scent and not commit to a longer candle burning session.

The burn times of the cameo and tea-light has been synchronised so that you never have to guess how long you have left – once the candle has extinguished itself, you know it’s time to change the cameo, and they’ve even made that a doddle: simply wait for the remaining wax to solidify, and lift the brass ‘spoon’ once more, and the whole thing will lift out, leaving a clean dish to fill with the next fragranced cameo. The initial purchase of the lantern comes with everything you need to get started, and is beautifully packaged (of course) in a Cire Trudon box.

The design of the lantern is both contemporary, with its clean lines and modern textures – and yet has that hint of history present in the deep library-esque colours and the vintage look of the cameos themselves. Because of the tea-light being protected by the glass, La Promeneuse can be taken outside, too – we’re already imagining sitting outside as the lighter Spring evenings drift into the hazy warmth of Summer, sipping a glass of wine and breathing in the scent of slowly melting cameos as we watch the flickering flame… 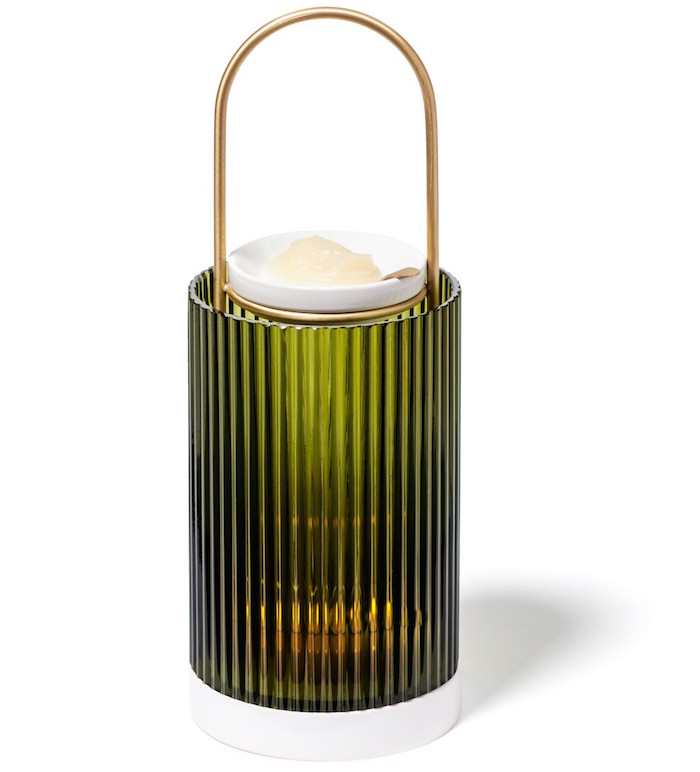 Category: Just launched
Tags: fragrance, wax, home, Cire Trudon, diffuser, candle, scent
RECENT POSTS
CHECK OUT:
LATEST FROM OUR SHOP
Follow By entering your email address you agree our blog partner (BlogLovin) sending you emails with our latest blog. You can always unsubscribe. We do not pass your information to anyone else. See our privacy policy.