Here at Perfume Society HQ, the first few glimpses of sunshine and we want to bask like lizards. After what felt like the Winter that never ends, how glorious it is to see the fresh crop of Summer-ready scents making their way onto the shelves!

A fruit-bearing tree renowned by the Inca people, home for the cherimoya plant turns out to originally have been Columbia, Peru, Ecuador and Bolivia, later spreading across the Andes and Central America. You probably have heard of it before, but perhaps by its better-known name of the ‘custard apple,’ so-called because of the creamy texture and particular sweetness of the flesh.

Mark Twain called the cherimoya ‘the most delicious fruit known to men’, with the botanist Seeman (and we’re not making this name up, I swear) chiming in by declaring, ‘if I were asked which would be the best fruit, I would choose without hesitation, cherimoya. Its taste, indeed, surpasses that of every other fruit, and Haenke was quite right when he called it the masterpiece of Nature.’

Awash with juicy, totally tropical temptations, the opening has the freshness of a traditional Cologne, then becomes almost milky, swirled through with a pear-like note and grounded in utterly scrumptious creaminess. Think of a passion flower glorying in sunshine, warmed by rich resins and a lightly smoked background of black tea. 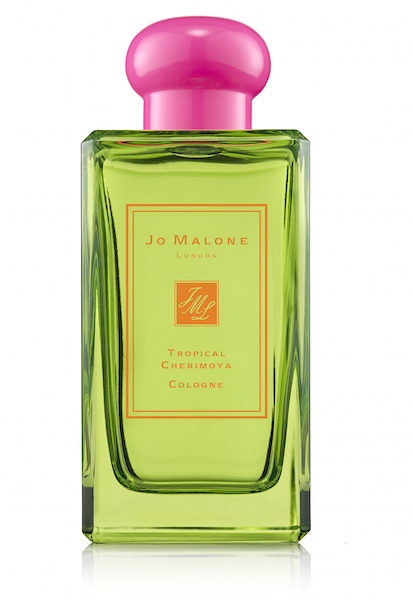 Tropically fragrant, exotically charged and part of the limited edition Hot Blossoms range, if you’re feeling like us (off to look at holiday deals and wondering if comfortable flip-flops exist) you’d best make haste to stock up for the heat, because they’re all selling like hot… well, blossoms.

Categories: Slider, Just launched
Tags: fragrance, scent, new, launch, Jo Malone London, cologne, Cattleya Flower Body Mist, mist, spray, Tropical Cherimoya Cologne
RECENT POSTS
CHECK OUT:
LATEST FROM OUR SHOP
Follow By entering your email address you agree our blog partner (BlogLovin) sending you emails with our latest blog. You can always unsubscribe. We do not pass your information to anyone else. See our privacy policy.