We’ve all heard of that ‘new car feeling’ – the uplifting smell of newness that comes with the first few days of purchasing a new vehicle, but how about that ‘new phone feeling’? London-based luxury fragrance designers, Design In Scent have teamed up with Carphone Warehouse to create a bespoke scent they say is ‘…designed to extend that “new phone feeling” far beyond the day you buy a new phone.’
The fragrance is called ‘Unboxed’ and will be made available at over 120 of Carphone Warehouse stores, as of October 3rd 2017. In addition, twenty five of their stores, including London’s Oxford Street and Manchester’s Trafford Centre, will be giving away the ‘Unboxed’ room fragrance atomisers to the first customers who purchase a new phone, while a further 100 stores around the country, including Bristol, Belfast and Edinburgh, will be giving out tester cards pre-sprayed with the scent – presumably hoping to cause something of a ‘buzz’. But what on earth does a ‘new phone feeling’ smell of…?
Design In Scent say: ‘Unboxed takes those who encounter it on an extraordinary journey into much like how we feel when unwrapping a brand new phone. Opening with sharp and addictive industrial top notes, Unboxed’s luxurious heart notes of cedar wood and frankincense then come alive to kindle a feeling of exclusivity and sophistication. The deep musky base notes smooth out the industrial tones, creating a chic and elegant composition.’ 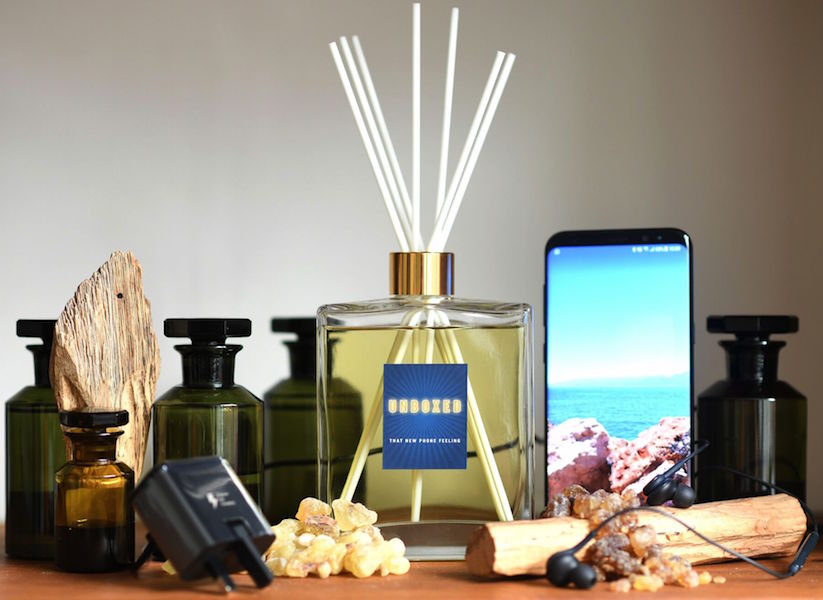 Gemma Hopkins, co-founder of Deign In Scent, began her fragrance career by being obsessed with the revolutionary quirkiness of chef, Heston Blumenthal – known for creating scents to enhance the overall culinary experience – and along with business partner Meghan Fay, the aromacologists delight in ‘breaking all the scent rules.’ Masterminds behind scenting some of the UK’s most exclusive venues and events, their olfactory experiences have included The Arts Club, The Shard, Heathrow Airport, Battersea Power Station and working with cocktail maestros Bompas & Parr. And now… phones, Unboxed.
Fascinated ‘…by the power fragrance has to change an atmosphere, stir emotions and evoke memories,’ and describing their process of somehow evoking the sense of excitement a new phone can bring, Gemma explained that ‘Capturing the complexity of that new phone feeling was a very exciting brief. We played with a range of curious ingredients to get that perfect blend of phone materials, sleek design and packaging, metallic electricity and luxurious exclusivity. We hope it evokes excitement for all who have the opportunity to smell it.’
With the digital world scrabbling to find a way of harmonising the power of scent, various apps and devices have previously been launched, the major hang-up (badoom-tish) so far being the fact that scientists have not yet found a way to accurately digitise scent or the sense of smell. In the meantime, then, perhaps it’s best to marry the traditional way of creating a fragrance with using the technological innovations as inspirations.

Category: News
Tags: mobile, telephone, Unboxed, fragrance, new, phone, technology, Design In Scent, Carphone Warehouse
RECENT POSTS
CHECK OUT:
LATEST FROM OUR SHOP
Follow By entering your email address you agree our blog partner (BlogLovin) sending you emails with our latest blog. You can always unsubscribe. We do not pass your information to anyone else. See our privacy policy.