Given the current state of the world, we thought we’d cheer ourselves up with a look back at some of the most hilarious vintage fragrance ads of yore.

Now that we’re firmly in the 20s, we’re feeling distinctly nostalgic for all things vintage anyway – but it’s easy to forget how drastically advertising styles change over the years. What once was ultra cool can turn to cringe in the blink of an eye. YouTube is the gift that keeps on giving, as far as viewing vintage adverts is concerned, and there’s a whole host of fragrance ads that range from the unintentionally hilarious to the downright dodgy. We’ve rounded up some more of our favourites to keep you smiling for the rest of the week…

There’s a distinctly Monty Python-esque feeling to this advert from 1969. At any moment, one expects a character to ask, ‘Alright, but apart from the sanitation, the medicine, education, wine, public order, irrigation, roads, the fresh-water system, and public health, what have the Romans ever done for us?’ To which, according to this advert, we can now add: Bacchus Cologne. He’s not the messiah, he’s a very smelly boy!

Lasers, leotards, smoke machines… could this be the dawn of the 1980s by any chance? This couldn’t be more thrillingly of its it time (1981 to be precise)  if it tried, and we even have SCIENCE (along with some nifty robotic dance moves, which I’m pretty sure we’ll all be breaking out down the club this weekend) to back up their claims of ‘pheremones’ in every bottle of Jovan Andron, that are ‘guaranteed to attract.’ Attract what, we’re not quite sure. Stifled laughter?

We can imagine the storyboard the advertising team created before filming this advert for Hawk Cologne in 1981, showing a ‘man who reaches higher’ – embodying all the freedom and graceful power of a bird of prey as he effortlessly conquers the rock he’s climbing. Unfortunately, the images somehow don’t match the voiceover, because what we see is a rather gormless chap with a bowl haircut looking for all the world like he’d need nanny’s instructions to climb the stairs to bed. Ah well, it probably looked good on paper.

This woman is not on the verge of a complete breakdown, she’s just ‘a little bit Kiku.’ That’s all. It’s 1969 and she’s fine, okay? She’s just changing her mood every two seconds and wearing a salad bowl on her head. She’s NEVER BEEN BETTER, thank you. In fact, aren’t all women, ‘a little bit Kiku?’ Well perhaps, but in public we try to hide it. Now take that off your head, Sandra, and come with us. We’ve all been rather concerned about you…

It’s not merely the yellowish hue that makes this 1976 advert look like a cheese dream: we think the people behind this campaign had been at the last of the Camenbert. In an unfathomably long sequence, we see Charles Bronson gawping weirdly at a piano player, then burst through the doors of his own appartment and begin stripping as though he’s joined the Chippendales, all while smoking a pipe. The name of the fragrance? Mandom. Of course it is. Pass the Brie.

London-based artist Sarah Baker is fascinated in the cult of celebrity, depictions of glamour and the extravagent shoulder-pads-at-dawn dramas played out in American soap operas. Though Baker’s career has thus far mainly revolved around making her own films, in to this heady mix of art and film she wanted to weave another layer of storytelling  – this time through the medium of scent.
Working with the prestigious Institute of Art and Olfaction in Los Angeles, Sarah Baker began to develop her own perfume line, collaborating with renowned perfumers, with Baker overseeing production from her East London Studio and the four fragrances finally launching at a decadent art show/party in December. Says Baker, ‘Each perfume is inspired by luxurious fashion motifs that evoke lavish scenes; while gazing at the printed bottles and smelling the perfumes, one could, for instance, be instantaneously transported onto the deck of a yacht in the Mediterranean….’
Sarah Baker Perfumes take us on a journey from the fizzing ozonic freshness of grapefruit and hedoine’s cooling breeze in Greek Keys, to the frankincense, florals and castoreum ferocious animalic growl (underpinned by fuzzy fur) in Leopard. Taking a softer turn, we have milky musk, coconut, vanilla and an ambrox sexiness of bare skin glimpsed in Lace; finishing with the full-on smokiness of open fires, heather-strewn hills, leather, hops and tobacco of Tartan. An eclectic and genuinely evocative collection, the Greek Keys and Leopard were made by perfumer Ashley Eden Kessler; Lace and Tartan by 4160 Tuesdays very own Sarah McCartney. At once enlivening, challenging and comforting – they are all a true feast for the senses. 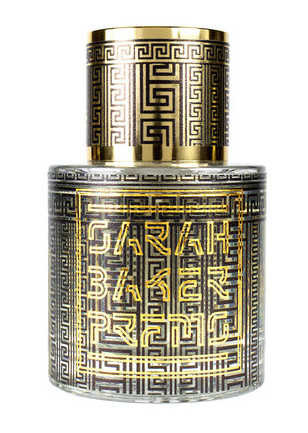 Sarah Baker Perfumes are currently £60 for 50ml eau de parfum, and available at sarahbakerperfumes.com
The worlds of film, fashion and fragrance are set to collide this Saturday, with the showing of Baker’s 2013 film Impirioso – the story of a wealth and fame obsessed fashion heiress who murders her husband when he sells the family fashion business, in the style of an ultra-glam 80s mini tv series.
And vital news for fragrance fanatics – you’ll be able to smell all the perfumes following the film. Sarah Baker explains that, in fact, ‘…Impirioso is actually the artwork which inspired me to make perfumes. It’s not about perfumes at all, it’s about a woman who murders her husband (based on Patrizia Reggiani) . Instead of using Gucci documentary/biopic-style I created a fake fashion brand “Rocco Rosso” and with it the logo and costumes, hats, home wares. It inspired me to finally make a real product, I had always wanted to produce a perfume, and that’s when I started working with Saskia from Institute for Art and Olfaction.’ 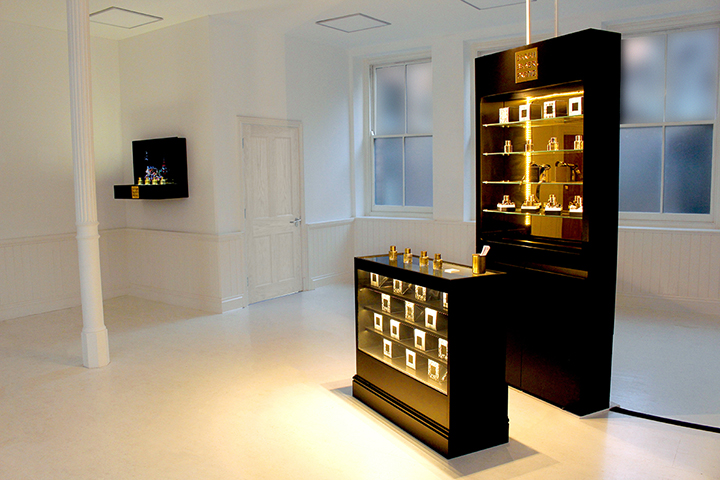 You can watch the trailer for the film by clicking here…
After the screening you’ll be guided across the road to Storefront – the installation where Baker’s perfumes are displayed, for smelling, wine and chats. It all sounds gloriously glamorous, and, even better – tickets for Impirioso are FREE, but booking is required.
The Hat Factory Arts Centre, Luton
Saturday 14 January
4.30pm
Trains run regularly from St Pancras Station and it’s a 1 min walk to the screening from Luton Station.
Written by Suzy Nightingale