It’s a jungle out there – an incredibly refined, ultra-green, 1970s-inspired one, thanks to Frédéric Malle and perfumer Anne Flipo‘s latest creation: Synthetic Jungle eau de parfum.

We were lucky enough to be part of the virtual launch event for Synthetic Jungle, where Fréderic and Anne discussed the inspiration behind the fragrance, and exactly how the composition came together. And Frédéric was  particularly keen, as you will see,  to make the point that synthetics are a vital and creative component to the fragrance industry, not some dirty little secret that fragrance houses should seek to obscure from public view…

Fréderic Malle: I had an idea about revisiting ‘green’ perfumery, and thought Anne was the perfect candidte for that. She’s very good at starting points. We looked together at formulas from the past.

One we thought particularly interesting was Private Collecion by Estée Lauder. This was our starting point. Working with Anne was like two musicians jamming together. We were very comfortable together, with common interests, a common language. There was no fear!

Anne Flipo: At the beginning I was a bit stressed because I had to understand how he works. But it was immediately very easy, he works the way I do. Everything was possible, but I wanted to organise the floralcy around the greenness. I chose lily of the valley.

Frédéric: The paradox, that people don’t often understand, is that to create a natural smell we need synthetics. Each synthetic note is part of the puzzle. I chose this paradoxical name to remind people how perfumery functions. And to show that what man makes is often as interesting as nature. …

Anne: When I choose the ingredients, (I work with over 400), the green note, for example, is very different to the colour itself…

Frédéric: There’s a difference between a smell and a perfume. Between a flower and a fragrance. A fine fragrance has to feel like it’s coming out of you, not worn on the skin.

Anne: I wanted it to smell like this jungle was coming out of you. The chypre accord helps it last on the skin, it balances the formula.

Frédéric: When Anne added the lily of the valley it was a huge turning point, it was the key. And then the dampness comes from Patchouli. 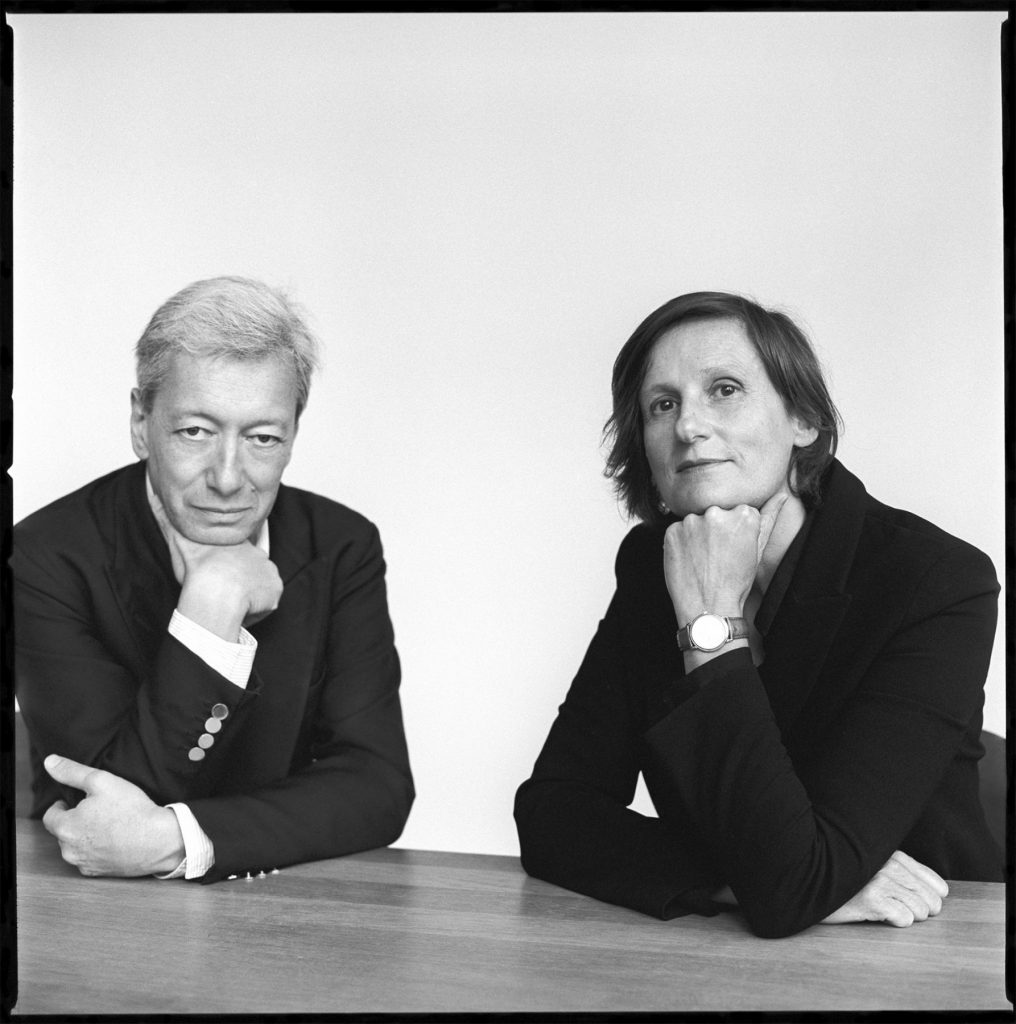 Frédéric Malle: Interesting perfumery really started at the end of the 19th century, because there were some synthetics available. Perfumery as we know it today has big doses of synthetic, and furthermore, if you want to recreate nature you need synthetic.  The name, Synthetic Jungle, is a way of opening the debate, I love nature, it needs to be preserved, don’t get me wriong; but this idea that everything from nature is great and everything from man is awful is a new kind of facism.

Anne Flipo: Making the formula very short was important to me, overdosing some ingredients – there’s a lot of cassis, overdoes of floralcy, not so many base notes volume-wise. They’re present, you smell them, but the construction is very modern.

Frédéric: Sometimes you have contrast. The patchouli and oakmoss is a black background, but it’s not dirty. A lot of the fragrances from the 1970s smelled dirty. This smells carnal, but not dirty. There’s a distinction.

Anne: I’m so proud and so happy to be part of the Frédéric Malle family.

Anne: Well, we really had the chance to challenge each other further during this.

Frédéric: It was a challenge, yes, but Anne has a great sense of humour and that’s really important. It’s like dancing, making perfumes; deep concentration, but also deep relaxation… 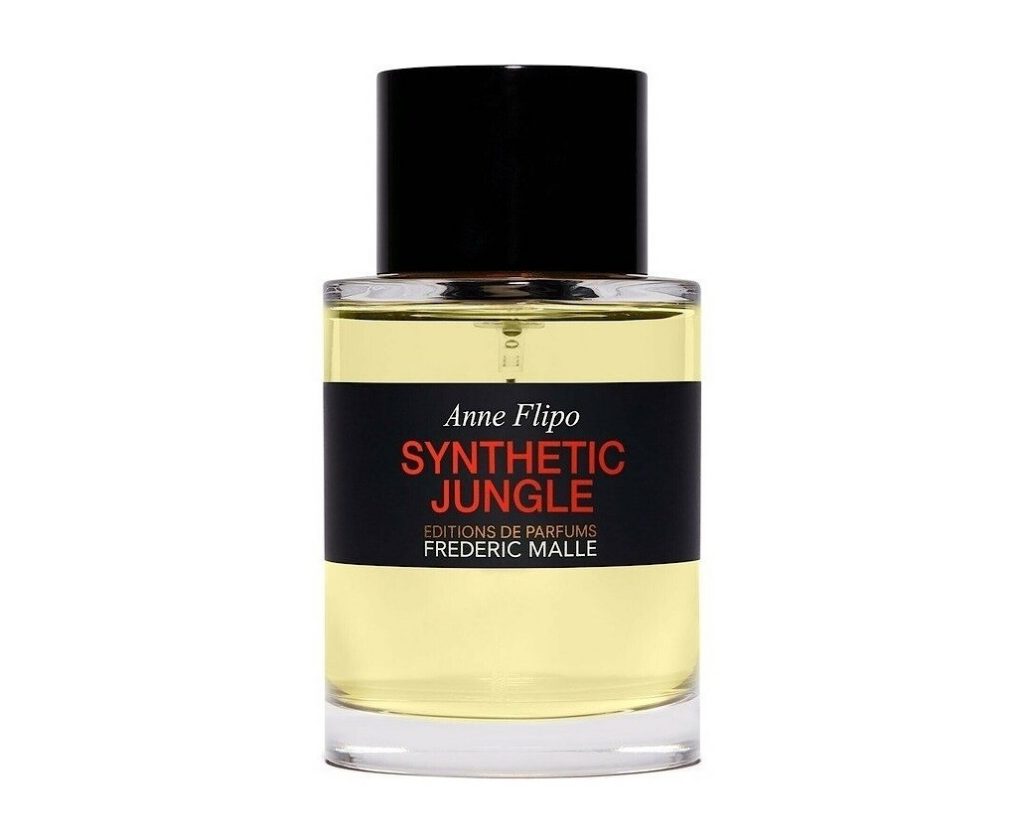 Synthetic Jungle is brave in many ways. For one thing, it has the word ‘synthetic’ in the title, at a time when there’s much so-called ‘green-washing’ – the implication that fragrances and cosmetics are ‘toxic’ if they aren’t all-natural, when in fact many essential oils are potentially more harmful and less environmentally sustainable to produce. For another, intensely green fragrances aren’t always the easiest to love. But Frédéric Malle has always been about the quality of the fragrance first, allowing the perfumer’s talents to shine through. And oh my, how Flipo shines in Synthetic Jungle…

What does it smell like? Bitter green crunchy stems and sticky sap – it’s very chic French Chypre from 1970s snogs a Cologne and goes wild, hacking through undergrowth, with vibrant bursts of tart, mouth-puckering blackcurrant, fuzzy tomato leaves examined under a microscope. WHOAH BLACKCURRANT GOES NUCLEAR! Everything gets HUGE AGAIN! Rolled in soft moss and seed spores to dampen the edges, the fruitiness gets warm, viscous, jammy.

Synthetic Jungle is the Indiana Jones ride at Universal Studios, or a missing scene from Honey I Shrunk the Kids as shot by a Vogue photographer in 1976 (a steamy greenhouse becomes a surreal cartoon jungle and everything’s impossibly glamorous). You emerge with berry stained lips and leaves in your hair, covered in grass stains and grinning wildly.

A little while ago we regaled you with our selection of reto perfume ads from the 1980s, and you loved them so much we just had to continue the theme. Here, we shift the focus to 1970s fragrances, and you’d better hold on to your bell-bottoms, because there’s much to take in…

She’s been sweet, and she’s been good, she’s had a whole full day of motherhood, and she’s going to have… a bottle of gin. In fact no, she’s going to have an Aviance night. We, the viewer, are not informed as to what ‘an Aviance night’ might comprise, but the way she so seductively peels off those cleaning garments suggests someone’s in for a great time. We can only hope it’s her, alone, with the bedroom door locked, a Demis Roussos record turned up to eleven, and that aforementioned bottle of gin.

You have to hand it to Prince Matchabelli, they sure knew how to roll out attention-grabbing advertising campaigns. Here, we are introduced to the novel idea that a woman can have two sides. Yes, TWO! She might be at work, in a suit pointing at things; she might be at a fancy restaurant behaving all ladylike… ‘but up close, she’s something else.’ Did we mention she has two sides? Explore both of yours by watching, in awe.

We desperately want Mrs Slocombe from the 70s sitcom Are You Being Served to turn up in the middle of this, saying something, crossly, about her cat. Be careful how you slap on that Hai Karate, chaps, because we can’t see many department stores putting up with this kind of tomfoolery in the fragrance section anymore.

This Tabu ad is actually rather subtle and well done (especially when compared to other 70s-tastic scent ads on our list), with a countdown to seduction… but are we shallow for thinking ‘those EYEBROWS!’ when she finally turns around? It’s in comparisson with today’s rather bushier brows, we know, but still. Also, she looks a little nonplussed and about to burst out laughing. Back to perfume – if you can get your mitts on a vintage bottle of Tabu, you really should grab it, because it’s sublimely filthy in the very best way.

‘When a woman puts Denim on a man…’ well, she probably shouldn’t wipe it all over his mouth, no? We’ve seen lots of men put fragrance on all by themselves, and have yet to witness one rubbing it into his lips, but perhaps this was something all 70s dudes did? We like to imagine after the director yelled ‘cut!’ on this one, the male model was immediately asking his female colleague what the hell she was playing at. Perhaps a pre-fragrance-filming tiff!

Enjoli is the ‘8-hour perfume for the 24-hour woman’, which has us wondering – why not a 24-hour perfume to match her cut and thrust lifestyle? If she’s not ‘cooking bacon in a pan’, she’s ‘blowing kisses’, and somehow managing to go to work in between. It’s non-stop (unlike the perfume, apparently). Yes, this entire advert’s take on Peggy Lee’s “I’m A Woman” might leave you wondering why, quite often…

Finally, for deliberately funny one, watch this commercial for ‘Charming’ (clearly a spoof of the Revlon Charlie ads) which was a sketch on the Donny & Marie Osmond Show. We love commedian and actress Ruth Buzzi as the second ‘Charming girl’ trying out for the part – a more realistic representation that we can definitely relate to!

Written and selected by Suzy Nightingale

Categories: Features, Slider
Tags: seventies, 70s, commercials, 1970s, adverts, retro, vintage, scent, perfume, fragrance
RECENT POSTS
CHECK OUT:
LATEST FROM OUR SHOP
Follow By entering your email address you agree our blog partner (BlogLovin) sending you emails with our latest blog. You can always unsubscribe. We do not pass your information to anyone else. See our privacy policy.