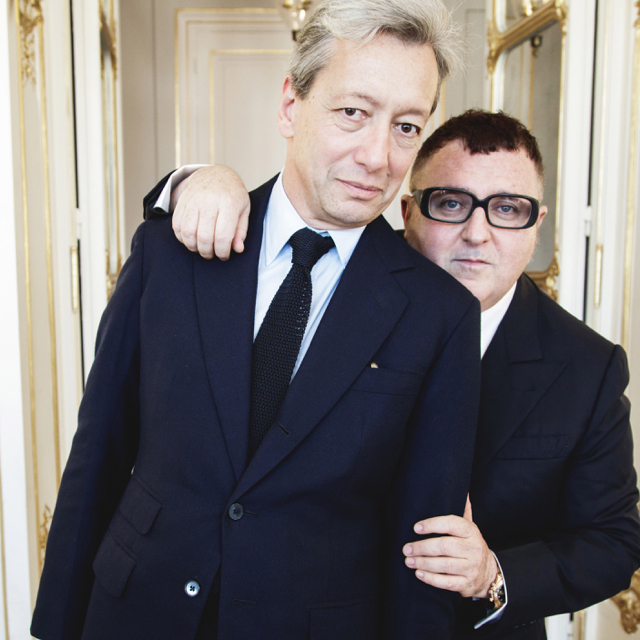 The wait’s over.
Ever since Frederic Malle announced a forthcoming collaboration with genius designer Alber Elbaz – a three-way project with Dominique Ropion, unquestionably one of the greatest noses on the planet – perfumistas have been on tenterhooks, longing to smell it.
We’ll confess: we had a teeny vial, which were allowed to sniff secretly, given to us after our event with Frederic at Selfridges last autumn. Suffice to say it long ago spritzed its last, and we’ve been impatient for a full-size bottle.
It’s here. Right here, right now, on our desks and on our skins. And our Senior Writer Suzy Nightingale describes it thus: ‘Fresh from the shower, straight into bed.’ Thanks to a rush of aldehydes, Superstitious starts out clean and soapy – and then gets very dirty indeed. It continues to veer between prettily innocent and phwoar!, on an olfactory rollercoaster. There are definite resonances of Ropion’s Portrait of a Lady (if you love that, this is going straight on your dressing table) – but this deliberately dares to go up against extravagant and complex aldehydic white florals like Chanel No.5, Arpège, Ma Griffe.
Can a fragrance become a ‘classic’, from the moment it is first un-stoppered…? It seems so. And from today (Friday 24th March 2017), the Frederic Malle boutique within Liberty (on London’s Great Marlborough Street) has a one-week exclusive on the fragrance – so you can make up your own mind. Superstitious? We don’t think Frederic needs to keep his fingers crossed that this will become a massive success.
And in Frederic’s own words, here’s how the fragrance came about…


‘For years I’ve admired Alber Elbaz, whose work I discovered in the late ‘90s when Pierre Bergé chose him to take the helm of Yves Saint-Laurent. It was a brand worn by my mother throughout my childhood, like many women around her, and one whose aesthetic shaped my own taste. It came as thus a happy surprise to discover Saint Laurent’s genius not only respected, but reinterpreted for a new generation.
When Alber arrived at Lanvin, my wife Marie often donned his designs – to my great pleasure. I admired him from afar, attracted by both his talent and the tender space he held in the hearts of our many mutual friends – that space for those we truly love…
It was just months ago, however, that – overcoming my reserve – I asked our mutual friend Élie Top for his number and invited him to lunch. We spoke at length, discovering not only friends in common but also a certain way to look at life and our respective professions.
With Alber, I realized that roles could be reversed. As a perfume editor, it’s my job to push others to outdo themselves. Yet there I was, face to face with someone who made me want to outdo myself. Someone whose extreme generosity – with his ideas, his designs, his attention – made me eager to return the favor a hundred times fold. I was full of ideas and rather than make a careful selection, I bared it all.
In a world where life seems programmed, organized and logical, Alber sees the irrational – neglected everywhere we are and in everything we do – as essential. Beyond words, images and reason, we must let ourselves be guided by a sixth sense – by our superstitions – free from judgment and unsuppressed. We must let ourselves go. We must trust our instincts.
If we were to create a fragrance together, we said, it would possess this mysterious element. Like a book open to interpretation, it would let the imagination run free. And like Alber’s own fashion designs, it would empower whomever wore it, leaving an indelible trace long after it passed. Almost immediately we knew if we were to create such a scent, it would bear the name Superstitious. And that is how it began.

Unabashedly, I showed my ideas to Alber, who chose one or two to develop further. In the spring, I suggested a black bottle, flanked by a golden eye – a symbol of superstition. Taken by the idea, he casually sketched three eyes with my red felt-tipped pen. One of them – forceful yet modest – reminded me of Alexander Calder’s jewelry. His favourite as well, it became our symbol.
And so it went for everything, guided by a spirit of friendship: I gathered ideas and sketched out a thousand options with my team in New York, then sat down with Alber for lunch, fearlessly showing him everything we’d imagined in a back and forth that cleared away the excess and further developed the ideas that felt right. At the end of our conversations, I often reminded myself: it’s for moments like these that I do what I do…
Alber was born in Tangiers, Morocco, grew up in Tel-Aviv, Israel, and lived in New York. Yet he is somehow the most Parisian of all my friends – the citizen of an eternal Paris of black and gold. To illustrate this deep, timeless elegance, I took a page from the city’s own book, transforming Alber’s eye from red pen on white paper to antique gold on deep black lacquer.

Like Alber’s dresses, a mystery of construction and design, I wanted to create a true “classic” – a perfume whose quality is unmistakable but whose ingredients are indefinable. What could be more beautiful? As luck would have it, I’d been working with the great Dominique Ropion for over a year on such a scent: a “grand aldehyde floral” with a classic architecture completely reinterpreted and comprising the most precious of raw materials. After convincing the ever-generous Dominique to give up “his” fragrance, I revealed it to Alber, who immediately fell in love. The two then met and Dominique finished the scent with Alber in mind.
Superstitious was thus created like the great classics – fragrances composed at a time when perfumers worked alone, only unveiling their work upon quasi-completion to the designers who would lend their name. Like a couture gown, Dominique adapted his masterpiece to Alber’s wishes, creating a perfume beyond definition, a perfume at once modern and evocative of the great scents of times gone by. It’s a perfume crafted from the most luxurious of raw materials: essence of Turkish rose, Egyptian jasmine, velvety peach and apricot skin, labdanum resinoid, sandalwood, Haitian vetiver, patchouli, musk… each unrecognisable, save for the most fleeting of instants.
An abstract piece of art, Superstitious is infinitely deep and endlessly enhancing. In it lies the reflection of a woman’s own complexity. Of her emotion and seduction. Of her mystery.’
Frederic Malle Éditions de Parfums Superstitious £158 for 50ml
Exclusively at Liberty until 1st April 2017 (then at Frederic Malle stockists nationwide)
Written by Jo Fairley (well, mostly by Frederic Malle)

Category: Just launched
Tags: Alber Elbaz, Frédéric Malle, Frederic Malle Superstitious
Recommended Posts
RECENT POSTS
CHECK OUT:
LATEST FROM OUR SHOP
Follow By entering your email address you agree our blog partner (BlogLovin) sending you emails with our latest blog. You can always unsubscribe. We do not pass your information to anyone else. See our privacy policy.