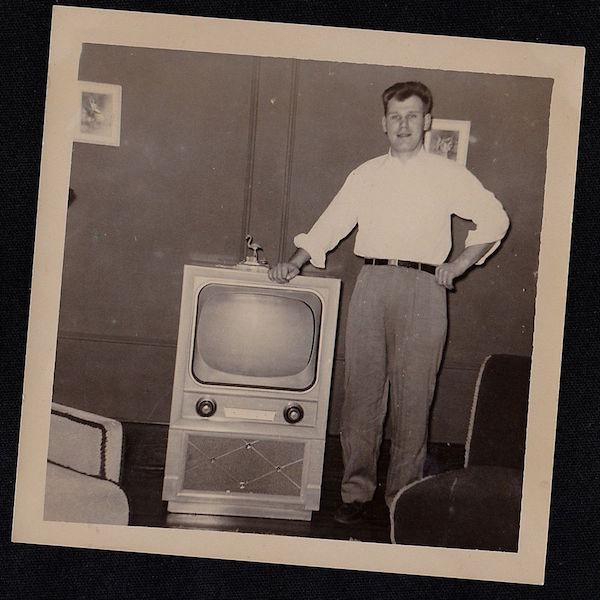 In our semi-regular series looking back fondly to fragrance ads of yore, we’re concentrating today on a batch that are even more (mostly unintentially) hilarious than previous selections. With a fascinating look at what men should smell like, and how they should behave, we feel these serve as public information films, and should possibly be studied in history lessons while a teacher writes ‘What WERE they Thinking?!’ on a white board…

There’s something rather ironic about the voiceover saying ‘…for men who aren’t kids anymore’ just as a woman is shown spoon-feeding her man-child partner in a restaurant, don’t you think? Immediately after asserting how grown up and un-kid-like the man who wears this fragrance definitely is, they ask ‘Would Canoe suit you? Ask a woman…’ while she’s now shown cutting his hair. We don’t get to see her rock him to sleep or read him a bedtime story or even talc his bottom with matching powder, but the inference is surely there. The people who made this Dana Canoe advert in the 60s HAD to be trolling the chaps, right? We’re down for it.

‘He believes in the same things his father believes in’ – wearing all white outfits while gazing wistfully from windows in all white rooms, apparently. Then, because he’s ‘strong and dependable’ he pops down to the beach to help two fishermen haul a boat out to sea (NB: they were doing perfectly well before he stepped in, but we’re sure they praised his name to the sky). Actually, we’re big fans of the Old Spice fragrance, here at The Perfume Society. It’s a proper masculine classic, and if you haven’t smelled it for a while, quit your sniggering and have a sniff. But do feel free to snigger at the old adverts, all the same.

#moustachegoals for miles as our hero is seen splashing on Blue Statos Cologne one minute, and hurling himself into a hang-glider the next. We hope he waxed that ‘tache or he could give himself whiplash. And who’d have thought it? It turns out hang-gliding is the perfect sport to take up if you want to make eye-contact with female drivers – not something we’d have thought Health & Safety regs would approve of, but still. She can get a whiff of his Cologne even as he whisks through the air above her car (like a fragrant falcon), and they immediately decide to live together in a glorified wooden shack. We love happy endings.

The Hai Karate adverts were always firmly tongue-in-cheek – ready to take the proverbial out of themselves, and presented in the manner of camp Carry On style films of the era. There’s something a bit weird about watching them now, though – a genuine sense of unsettling danger of women uleashed from their senses by getting a mere sniff of the Cologne. Here, a female nurse adds injury to injury by ruthlessly persuing a patient across a hospital ward. Apparently the brand put ‘instruction for self defence with every bottle’ because it smelled so good, men who wore it were in constant danger. Or something.

Shopping for men while picking up their vegetables for the week, two women perform an improptu musical outside a greengrocer’s, discussing what, exactly, constitutes ‘something about an Aqua Velva man.’ I’m not sure we ever quite get to the bottom of it, only that they must be ‘manly’ and ‘last all day’. With packaging that at first glance might be mistaken for men’s hair dye – or a devastatingly attractive fake Moustache In a Box – we can only guess how ‘fresh’ and/or ‘provocative’ the duo of fragrances actually smelled. Or perhaps it’s of secondary importance to the freshness of the veg?

Categories: Features, Slider
Tags: fragrance, perfume, scent, male, vintage, TV, man, masculine, retro, ads, adverts
Recommended Posts
RECENT POSTS
CHECK OUT:
LATEST FROM OUR SHOP
Follow By entering your email address you agree our blog partner (BlogLovin) sending you emails with our latest blog. You can always unsubscribe. We do not pass your information to anyone else. See our privacy policy.