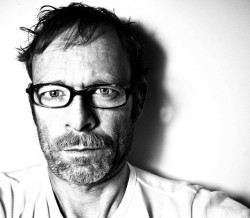 We’ve been charmed by this Swiss-born perfumer since we first encountered him – and his innovative, beautiful creations – some years ago. It’s an odd change of career, from IT man to perfumer – but this Zurich-based man (who does happen to have a chemistry background) has gained quite a global following, for scents like the super-smoky Lonestar Memories, Incense Rosé, Une Rose Chyprée and the intriguing Dark Passage, each packaged in a so-recognisable geometrically-shaped flacon.

You can read about Andy Tauer’s fragrances at www.tauerperfumes.com, where he also writes a terrific regular blog. (That previous link takes you to the store locator, for your nearest retailer, too.) We’re also charmed by his drawings, by the way. (All Andy’s copyright, naturally.)

Well, to be honest: I do not really remember. The older I get the more my memory seems to fade. An educated guess would be the scent of my mother. What I do remember, however, is the smell of the area where I grew up: In a little village, at the border of the river Rhine, 400 people living there. It is a medieval village that used to have the privileges of a town in medieval times as it sits over a bridge and was an important gateway to the lands cross-river. Anyhow, there I grew up in the sixties, in an old house. The streets are narrow, mostly in the shadow and I remember the fragrance of cold, humid stone, mosses, the scent of centuries gone by. And I remember the scent of pigs, on the farm nearby, peacefully doing their business outside. We would feed them dandelions and carefully try to touch them. Pigs are lovely animals and smart: I bet they knew me.

When did you decide you wanted to be a perfumer?

I did not decide, really. I came to perfumery like a virgin getting pregnant: It just happened. Initially my making perfumes was a hobby, a game and not taken seriously from a commercial point of view. It was an outlet for my creativity that sort of died in the office. It became a serious matter when I created my first perfume that landed on the shelves of a store (a bookstore, actually). But still then, I remember clearly, I would never dare to call me a “perfumer”. The first time I said that I am a perfumer was when getting through the immigration in Egypt, a couple of years ago. I handed the filled out immigration form over to the officer and learned my first lesson being a perfumer: It makes people talk. The security officer was very enthusiastic, started talking about Egypt’s fragrant treasures and wanted to know more about my brand and whether I use jasmine from Egypt. I do, and the officer was very happy with my answer. 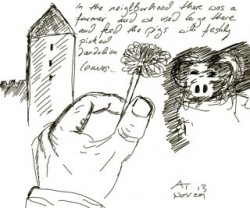 • First comes to mind – very banal and common place: coffee, freshly-brewed, in the morning. Best, if I smell it while still in bed, which means that my partner made it. Second best: When I made it. The smell of fresh coffee is a promise, of a bright enlightened brain. So far, it always kept its promise.

• Now that we are talking about drugs: another wonderful scent, not understood by many, the whiff of a freshly lit cigarette or better even, a Cigar. Just the first whiff can be amazing.

• Another favorite: the smell of a forest after a rain on a warm day. It is a rhapsody of moss, warm wood, damp rich earth, animalic mushrooms. Just wonderful.

• I also love, love, love lily of the valley blooming in May. Again: in the the woods, so little flowers, so much volume.

• I always loved the smells of the hair of my lovers, too. All of them different, though, but all of them so sexy.

Do you have ‘signature’ ingredients that you like to include in fragrances?

Absolutely: You find in many fragrances of mine cistus ladaniferus extracts. Amber, wood, vibrant, balsamic, earthy, depending on the extract. Another ingredient that I love to include is rose in many facets. Sometimes it is just a hint in order to soothe a composition and correct mistakes (or cover them up….) and the rose absolute will not appear in the list of notes. Jasmine works the same way. Just a drop of jasmine absolute can do wonders.

What’s the worst thing you ever smelled. (Honestly!)

What is the fragrance you wish you’d created?

Diorissimo, but in the fifties, when you were still allowed to use ingredients that are now banned or restricted in concentration by the European Union and its out of control bureaucracy.

How about doing a charity fragrance for Albert Schweitzer? He was a man of many talents, who did -in his time with the value system it brought- good to many people. He might have appreciated a nice perfume inspired by Africa. Or maybe, a bit more on the dramatic side: a nice cologne for Sir Winston Churchill. A great man, who happened to be there where and when he was needed most. I wish we had a Churchill these days in Europe. 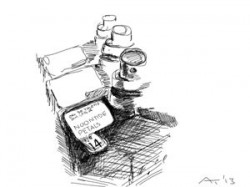 I think the two go together. I cannot remember having bought a fragrance for somebody else when being a teen… My first purchase might have been Kenzo, or Lagerfeld. For sure I wore Joop back then, too.

Oh, that depends! It can take a day. This happened (lucky strike!) when I composed the fragrance Loretta for the Tableau de Parfums series, inspired by a film called ‘Woman’s Picture’ by Brian Pera. We have this wonderful collaboration and the perfumes in this series are inspired by women and their world in this film. Loretta just happened. First in my mind and then in an Excel spreadsheet and then in the experimental flint glass bottle. Sometimes, it takes for ever and is never good. Then we are talking years, and agony and the feeling of failure. Usually, it is 1-2 years.

Is creating a fragrance ‘visual’ for you, as well as something that happens in the nose/brain? If so, are you able to explain in what way…?

Creating a fragrance is, on one hand, intense mind work. A constant juggling and up and down in the brain, starting from an idea that I cannot describe really. It is like a mirror picture, or the look through a kaleidoscope: You see it, see details, the colors, the shape, the texture, but it is not the picture itself. Often, while working on a scent this kaleidoscopic picture becomes different, solidifies. I start working on a scent in my mind, then I start writing formula(s) in Excel, from head notes to base notes. Then I mix in my home, in my creative mess room that used to be a guest room (no guests sleeping in the house of Tauer anymore). As I use a lot of naturals in my compositions, the trial versions have to mature for at least a few days before I can test them. When starting with a new idea, I do large iterations, big steps, covering a large ‘scent area’, and by picking the best, narrowing down the iterations, changing details, I gradually try to approach my goals. Quite often, I follow different branches and if presenting the formulas graphically, all the trials would look like a evolutionary tree, with the final result on the top and many dead ends branching out.

There is one thing that is important (I think): Intuition and letting it in. Sometimes I do weird trials that mostly fail because I follow an intuition, a crazy idea. Rarely it works out nicely.

What can each of us do to enhance our appreciation of fragrance?

Leave the Duty Free and comparable environments. No good for a searching nose! Reach out for the classics and try to enjoy them, even if they are outdated. An example of such a classic, not being outdated: Knize Ten. Be open. Don’t let the price tag fool you. High price does not mean high quality. Give it more than one try. Edmond Roudnitska, in his little booklet ‘Le Parfum, from the ‘Que sais je’ series (not in print anymore), said about perfume: A beautiful perfume is a perfume that leads to a ‘sensorial shock’ (literally translated). I interpret this in a way that a good, beautiful perfume will always be something striking, hard to classify. Give it another chance.

Don´t worry, but enjoy! Fragrances are made to be enjoyed, be it a five pound cheap thrill or a £200 Pound artistic composition. Don’t worry if you do not smell the rose in the niche rose fragrance. If you like it, it is ok, whether you get the rose or not.

And, maybe, be careful not be fooled by your eyes. Do not let pictures of handsome men or fairytale women, elaborate packaging, crystals on flacons, gold and silver, fool you. It is the juice that you want to smell, it is not the flacon, not its packaging and not the ads. that tell you what you smell. Ask kids whether they like a particular fragrance (on you): they are honest and will tell you the truth.

What do you think that living in a highly-fragranced world – not perfume, but all those scented candles, room fresheners, fabric conditioners – does to us, and our senses?

It is detrimental, disastrous. As nice as it is to have left the stinks of Paris of 250 years ago, scent and fragrances have become a commodity. My generation is conditioned by these scents that you find everywhere; and we are all desensitised. The same happens in the food industry. Nowadays, our food (think: yoghurt, vanilla cream…) comes with too many synthetically-produced aromas (often natural identical, but this is not the point, it is the concentration and mono-tonality that matters) that we have a hard time appreciating the real thing.

Try it yourself and add blueberries to a yoghurt without any additions, no color, no sugar. You will be disappointed how blunt and boring it seems. What I find devastating , as experience, is also the awkward moment when you realize that your £100 fragrance smells, in the end, like your 1 Pound shampoo. It is called ‘trickling down’, meaning molecules used initially in high perfumery will sooner or later, with the decreasing price of the molecules, be used in low end What can we do? Think twice before buying another room fragrance, and read the labels of your yoghurt.