It’s tradition for perfumers to have a ‘trophy’ wall in their office: a shelf with all their creations. It starts out bare, of course, but as their career progresses, fills up with beautiful bottles and extravagant boxes, a testament to their talent.

Sonia Constant‘s ‘trophy wall’ at leading fragrance house Givaudan, in Paris, is quite something. Sonia’s roll-call of fragrances is longer than most people’s arms – from Balmain Extatic to Montblanc Emblem, Oscar de la Renta Fresh Vanilla to Burberry Sport for Men, via eight fragrances for Fragonard (Muguet, Le Lilas, Étoile, among others), as well as Guerlain L’Abeille and Acqua Allegoria Tiaré Mimosa. And that’s just a taster.

Now a mother-of-two, Sonia trained at the Paris perfumery school ISIPCA. ‘I didn’t really know I wanted to be a perfumer; I thought I might become a designer, a stylist, an architect. And then I discovered ISIPCA and because I loved fragrance, it seemed the perfect profession for me. My grandmother says that one of my first words was “flower”.’

‘My family didn’t really believe I could do it,’ Sonia continues, ‘because they thought I was too shy and not tough enough to work in such a competitive industry. I did not have an uncle, a father or any male relatives to help pave the way. I was alone in believing I could achieve my dream. Even as a young woman, though, I thought that it was better to aim for the moon – and if I missed, at least will end up in the stars… It took five years: I did a “sandwich” course, training at the school and spending time at Givaudan, where I still work.’

We’ve a hunch Sonia could go on to become one of perfumery’s top names. And we’re delighted to share some of her fragrant insights, here…

My mother’s perfumes: she was wearing Van Cleef & Arpels First, and sometimes Paloma Picasso. She liked those ‘rose Chypres’.

• I love a flower that almost nobody knows, called a spider lily. It smells a little like a lily, but is more powdery. I work a lot with flowers.

• Ambroxan. It’s a synthetic ingredient and it excites me a lot: it’s like a black-and-white photograph – very modern, and it doesn’t date or age.

• Cashmeran. It’s a wonderfully soft ingredient but also a little bit ‘rock star’ – like a beautiful feminine woman wearing leather trousers. I like the handwriting it gives to a perfume.

• Orange flower. For me, it’s a sort of gourmand (edible) flower – you just want to eat it. And of course, you can: it’s used for cooking. I like to use it with musk for a sort of marshmallow effect, and it goes brilliantly with iris.

• Orris (iris). I love the powderiness, like a woman with a sort of untouchable beauty. It almost has a texture, to me – like suede. I like to use it in a modern way.

And your least favourite?

Vomit! I used to run a lot around a lake where there’s a restaurant where people take a boat and drink too much… And every Friday there were piles of sick on my run. I also hate the smell of durian fruit.

What’s the one fragrance note that you love above all others?

Ambroxan – for the reasons above.

Narciso Rodriguez, by Christine Nagel. Actually, she’s my sister-in-law – I’m married to her brother. (She kept the name of her first husband.) You might think we talk about perfumery when we get together, but actually, we’re both very busy and it tends to be family stuff. (NB you can read Christine Nagel‘s nose questionnaire, here.)

Does it have to be a historical figure…? I’d love to create a fragrance for filmmaker Wong Kar-wai: I love his films -especially ‘In The Mood for Love’ – and the atmosphere they create. They’re all about love and lovers; the cinematography is so beautiful: no sex, just suggestion. I’d love to capture the same feeling in my perfume. His films give me shivers and I’d like my perfumes to do the same.

What was the first fragrance you bought? And the first bought for you?

I stole my mother’s Van Cleef & Arpels First, and then when I had some money, Chanel Allure was my first big fragrance. When I finished the bottle, my boyfriend at the time bought it for me again. Nowadays I wouldn’t want to wear something I hadn’t created myself – and of course, I’m always trialling perfumes. 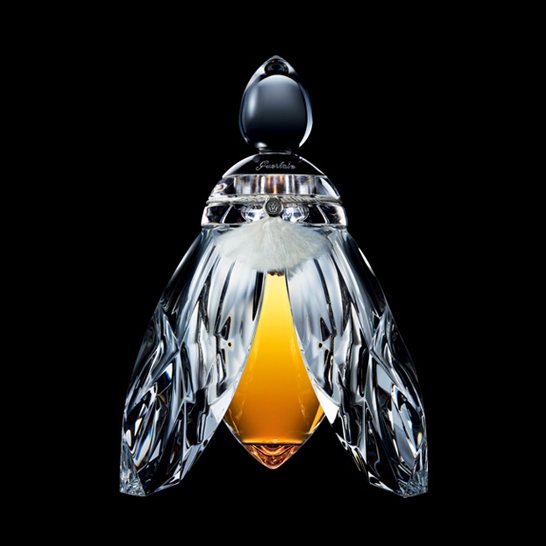 The crystal bee bottle for Guerlain L’Abeille. In general we are given bottles of the fragrances we create but this one is way too expensive!

Up to 10 big ones, at one time. I also work on niche perfumes, of course. It’s not easier when it’s a niche perfume, but when I create for a big brand – such as Valentino – the fragrance is tested on consumers to gauge their response, and you need to know that response is positive. When I create, it’s like a partnership: I listen to the comments and adapt, constantly.

Is creating a fragrance ‘visual’ for you, as well as something that happens in the nose/brain?

I’m a very visual person, and so yes. I might be shown a picture of ice, and I love the challenge of something that smells ‘frozen’. Or see a picture of bright colours, fruits and spices, and create something that’s fizzing with energy. Ingredients for me can be like planets, orbiting in the universe. It’s like my solar system: there’s the sun and the planets and sometimes, there’s a big bang!

Pay attention to all of the smells around you. Blind-smell your spices, in the kitchen, and try to figure out which is which. Smell plants. Smell wine. Most people go through life not thinking of smells, but when you start to notice them, there are just so many different and interesting things to smell – beyond fragrances themselves. It’s an absolutely fascinating time in history, for those of us who love smells, as this awareness of our precious sense of smell dawns.