Award-winning British fragrance name Shay & Blue‘s founders believe that modern fragrance ‘should stand on the shoulders of giants’ of past perfume greats.

So what you’ll discover, decanted into their beautiful pale blue bottles, are fragrances created according to the great traditions of perfumery: beautiful smells, perfectly constructed, created with some of the most precious materials that the fragrant world has to offer. That means May roses from Grasse, zingy Sicilian limes, white narcissus, mimosa, juicy blood oranges, Bourbon vanilla…

In his ‘previous life’, Dom De Vetta was a Senior Vice President at Chanel and Global General Manager of Jo Malone London. (Personally, we go back even further than that with Dom, to his Lancôme days.)

His vision for Shay & Blue was to create a new perfume house:  ‘a boutique company of talented individuals who will guard the flame of traditional fragrance know-how, preserving quality fragrance-making techniques for future generations.’ So Dom has teamed up with new-generation perfumer Julie Massé, who brings her creativity and know-how to the creation of Shay & Blue‘s growing portfolio of fragrances. Born in Grasse, the global heartland of perfumery, Julie has trained with some of the perfume world’s true legends, including Christine Nagel and Pierre Bourdon. (Read more about Julie here in her ‘Nose’ Q+A for The Perfume Society).

The fragrances are hand-crafted and hand-filled in the UK, but Dom and Julie also work closely with Grasse producers, tapping into their expertise. In Grasse, ingredients are still ‘hand-picked’, hand-weighed, hand-distilled: an artisanal style of production which makes for the highest-quality ingredients. That care and attention is why Grasse is still the go-to source for fine perfumery, even in today’s high-tech world. As Dom explains: ‘The blends are left to stand… to mature for over three months – for richness and depth.’

The initial collection of six fragrances brought us Blood Oranges, based around one of the fragrance ingredients du jour: it’s tangy, citrus, juicily inviting – and dries down to a sensual finale of musk, charred woods and amber. Amber Rose (pictured right) is a classic romantic floral, fusing May rose with gourmand note dulce de leche, on a radiant white amber base.

Shay & Blue added Blacks Club Leather (created in partnership with Blacks Club of Soho, one of London’s most bohemian membership clubs), recreating the scent of the crackling hearth, leather-covered books, and smooth brandy… (Everything is shareable – in the tradition of contemporary perfumery.)

Since then, there’s been a lot of further excitement at Shay & Blue– and a slew of awards: Best New Fragrance House 2014 (from The Beauty Shortlist), winner of Best Artisan Fragrances 2012 (Monocle), and Best Creative Director 2013 from CaFleureBon website. 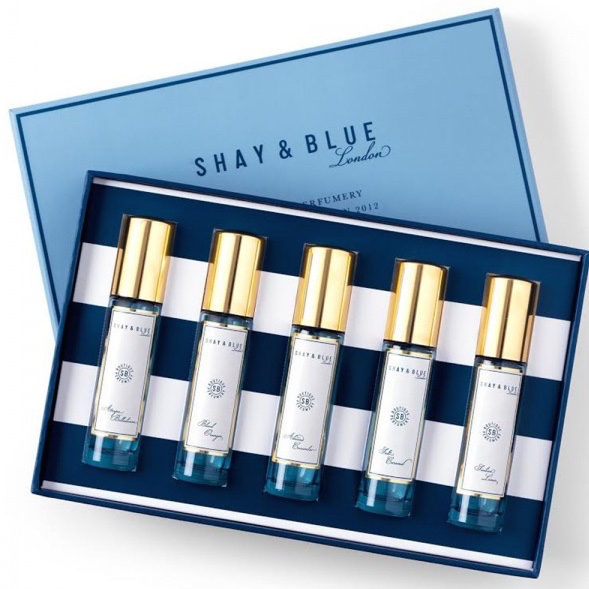 As that blog said of Salt Caramel: ‘Shay & Blue’s cultured gourmand is one of the finest I’ve worn for a while. Skin smells seriously halcyon and lickable. In the talented hands of perfumer Julie Massé, the thoughtful alliance of caramel and salt has been raised to the olfactive equivalent of classic French patisserie.’ Shay & Blue Framboise Noire, meanwhile, we hand-picked for our Putting on the Spritz Discovery Box: dark, woody and deep – it’s described as ‘a heart-stopping thriller’. (And it delivers.)

Shay & Blue is increasingly widely retailed (including in the US and Australia) – but to explore the collection in depth, why not check out their Precious Miniatures Discovery Set, here? We also suggest a visit to their Crawford Street store, in London’s Old Marylebone. With a slightly gentleman’s clubby feel itself, it’s kitted out with antiques and tasteful objets, and is a very pleasurable place to while away a little me-time. Everything is packaged in the smart blue boxes, making each feel like a special present. Find Shay & Blue‘s debut boutique at 80 York Street, London W1H 1QW/0845-548 0113.

And the name?  ‘Shay was my grandmother’s name,’ explains Dom.  ‘And who doesn’t love the colour blue?’