As one department store buyer put it, ‘Prada is totally monumental. She leads everyone.’ But did you realise that Prada‘s roots go back to 1913, when Miuccia Prada‘s grandfather and great-uncle, Mario and Martino Prada, opened a store selling fine leather goods in Milan’s prestigious shopping arcade, the Galleria Vittoria Emanuele II…? 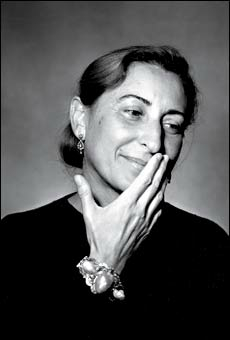 From there, Fratelli Prada (Prada Brothers) went on to supply leather goods to the Italian royal household. We need to time-travel forward through a few decades, though, to see how Miuccia Prada‘s influence transformed Prada from an Italian luxury store and leather brand into an iconic global fashion line. In 1977, Miuccia Prada took over the reins of Prada from her mother Luisa – who’d been appointed custodian of the family business by her father-in-law, Mario, in 1958.

Miuccia was young – just 28. And fashion-conscious. She was smart, with a doctorate in political science. She was – is – a feminist, too. It was her future husband, Patrick Bertelli, who suggested she focus on reinventing her grandfather’s original leather designs – for luggage and handbags, to introduce Prada to a new, stylish audience. It was a savvy strategy: in 1978, Prada accessories made their Vogue debut. Since then, Prada has become white-hot, style-wise – moving into womenswear (and menswear), shoes, and launching secondary line Miu Miu (Miuccia’s nickname), in 1992. 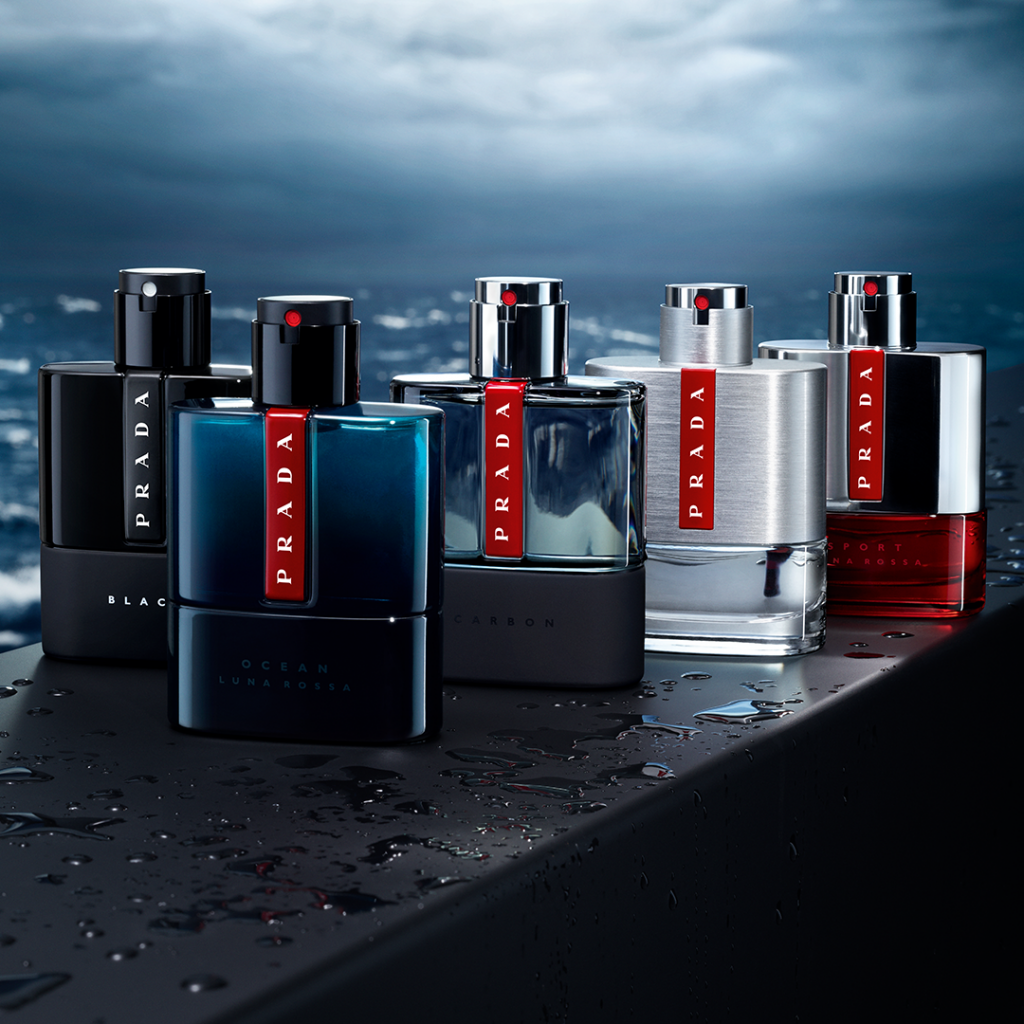 A fascination with art has led to Miuccia Prada also becoming a power player in the worlds of contemporary art and architecture; through the Fondazione Prada (set up in 1993), they’ve acquired more than 700 significant works – and collaborated with the leading architects of the day, such as Rem Koolhaas, for the avant garde flagship stores in New York and Los Angeles.

Prada worked with director Baz Luhrmann and legendary costume designer Catherine Martin on the creation of over 40 cocktail suits by Prada (and Miu Miu) for the reinterpretation of The Great Gatsby. (It wasn’t her first time working with the director: she designed costumes for Leonardo di Caprio in Romeo + Juliet.) As Miuccia Prada has said, ‘I would say that I try to make all that I do  more intelligent, and introduce intelligence through what I do…’

For sure, her clothes are lusted-over, everywhere. Accessories, too, of course. But one hugely successful facet of the Prada story is the collection of fragrances, created in the last decade or so. Prada Amber (a.k.a. Prada Eau de Parfum) was unveiled in 2004: a ‘new age’ in the history of amber fragrances, taking an ingredient rooted in ancient perfumery, reworked for our times by ‘star’ perfumers Max Gavarry and Carlos Benaïm.

Prada Candy L’Eau was next up: fresh and luminous, airy with the scent of a bunch of sweet peas – and still with a subtle caramel warmth, at its floral Ambrée heart. (If you haven’t ever watched them, click here to see the series of short films produced by Roman Coppola and Grand Budapest Hotel director Wes Anderson, for Prada Candy L’Eau: they’re utterly enchanting.) The bottle, pretty unsurprisingly, won a Fragrance Foundation Award in 2012 for Best Packaging of the Year. Prada Candy Florale then joined the line-up’: it was created by top nose Daniela Andrier, this time designed to evoke the scent of a bouquet of flowers standing on the counter of an Italian ice cream shop. (To which we just say: yum.)

As long ago as 2003, meanwhile, Prada began offering exclusive (and numbered) ‘artisan fragrances’ through their boutiques, and a handful of department stores, each focusing on a single note: Orange Flower, Tuberose, Opoponax, Violet, etc. And in 2015, they revisited this idea with a complete, breathtaking collection, created by Daniela Andrier and known as Les Infusions de Prada. 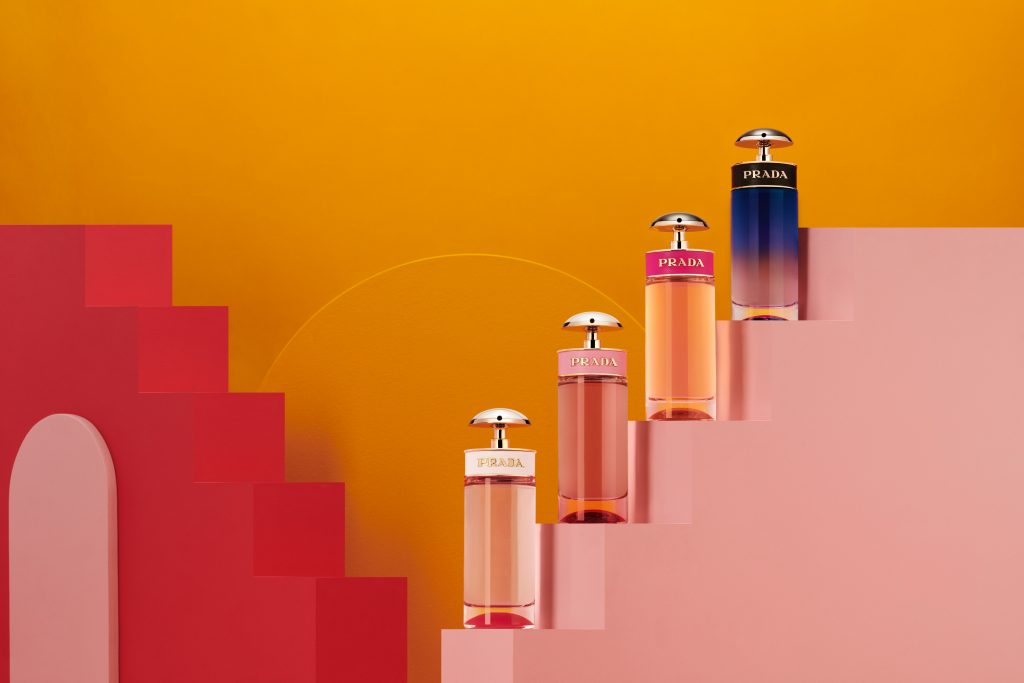 Unusually for a ‘nose’, the starting point for Les Infusions, explains Daniela Andrier (who created the collection), was one of almost total freedom. ‘There was no “brief”,’ she smiles. ‘That’s not Prada. We had an overall theme, but my job was simply to explore the universe of Prada in an olfactive way…’

For Les Infusions, she created a signature which she calls ‘L’Esprit d’Artisan’: ‘it’s like the perfect, fresh, clear “water” that I can then combine with the theme of individual ingredients.’ Each ingredient has its own very distinct personality, in her hands: Iris, Iris Cèdre, Fleur d’Oranger, Vétiver, Oeillet, Amande. (Mimosa joined the line-up a little later.) But what Les Infusions have in common, she adds, is that they ‘appear to be very simple – as if you were tattooing water with an ingredient. In reality, each is a multi-faceted formula. In a similar way that water must be at a particular temperature to create the perfect tea, the base composition allows the beauty of a flower, wood or fruit to be revealed in a bright and sensitive way.’

So: if you need any excuse to step inside a Prada store, on any of the world’s smartest shopping streets, we suggest you turn it into mission to dab and spritz your way through the whole Prada perfumed portfolio.

We predict you could be gone for some (very pleasurable) time…