Michel Almairac has created award-winning, world-renowned blockbusters for just about every perfume house you’ve ever heard of. And now, to the delight of perfume-lovers, he has launched his own fragrance house (with his family) – and opened a boutique in Paris’s Le Marais… 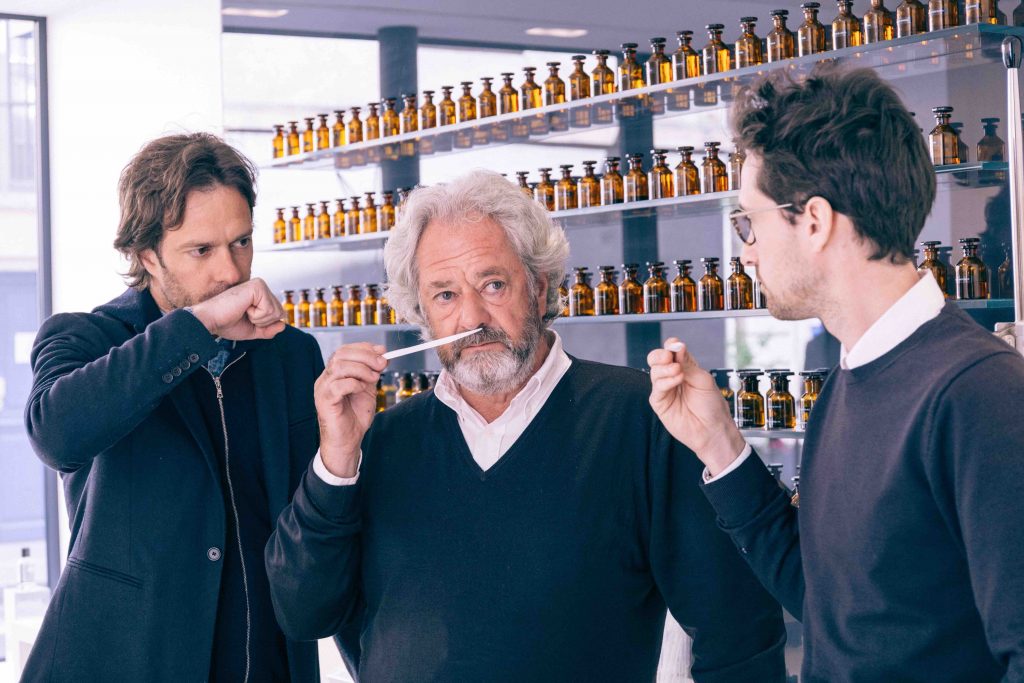 Providentially born in ‘the birthplace of perfumery’ – Grasse, in Provence – Michel Almairac says he was ‘always surrounded by scents and smells which is part of life in that city, natural ones from the crops of flowers growing in the fields, and industrial ones as well, from the perfume factories.’

When he was 13, he asked to visit one of these mysterious perfume plants, and recalls being ‘…fascinated by the atmosphere, all the people in their white coats dipping and mixing scents.’ It sparked a passionate flame for fragrance, and in 1953, he attended the Roure Bertrand Dupont perfumery school, now part of Givaudan. Almairac worked at various times for fragrance houses Takasago, Créations Aromatiques and Drom, from the late ‘90s mainly working with Robertet.

His astounding CV encompassing a literal A-Z of perfumes from Dior Fahrenheit to Le Labo Ambrette 9, via Gucci Rush, Chloe Eau de Parfum (2007), Bottega Veneta Eau de Parfum (2011), Burberry for Woman and Burberry for Men – and so the list of hundreds goes on. But Michel found that he was having literally to shelve his most treasured creations because they didn’t quite work for the corporate briefs. He could never forget about them, however – and sometimes would take a scent home for his family to smell. 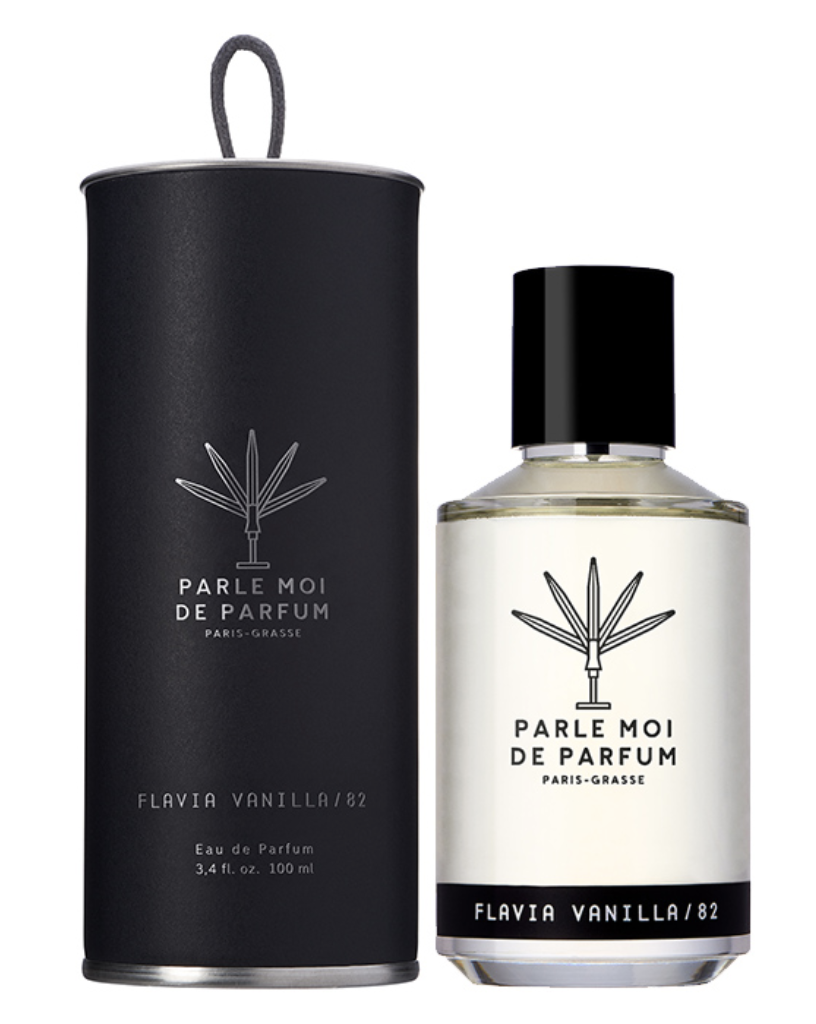 And so the idea grew – what if, with his son Benjamin Almairac, they could unlock this treasure trove of masterpieces and found a house of their own? Explains Michel: ‘When you spend your life imagining and composing for others, you sooner or later want to create with your own dreams and share them. With your children first of all. And then with others.’ For Benjamin, ‘It was absolutely obvious! I was steeped in perfume when I was a boy. It was difficult to miss!’

So Parle Moi de Parfums (literally -‘speak to me of perfume’) began in 2016, at Benjamin’s prompting. He enlisted his mother, Elisabeth, and his brother, Romain, to design a boutique to showcase their wares. They wanted it to be ‘…a space for witnessing the creation of a perfume and discovering that combination of magic and technique, of disconcerting ease and maddening complexity, that Michel describes when talking about his work.’ Having visited the store in Paris’s Marais district we can only applaud their complete success – it’s an open, airy space with a central table laid out with perfumes to explore, and helpful staff on hand to guide you. Turn around, and there’s the laboratory, with work in-progress before your very eyes. It’s simple and revolutionary all at once.

The perfume bottles follow the pared-down elegance of the concept store, the numbers on the labels denoting how many differing stages (or ‘modifications’ that the formula went through to completion, ranging from 8 to 126. (Far fewe than for most commercial briefs, which an require up to 5,000 modifications… ) We love the fact that the brand’s logo takes its inspiration from fragrance blotters (or spills), fanned out just as a perfumer would do when he was analysing his olfactive creations… 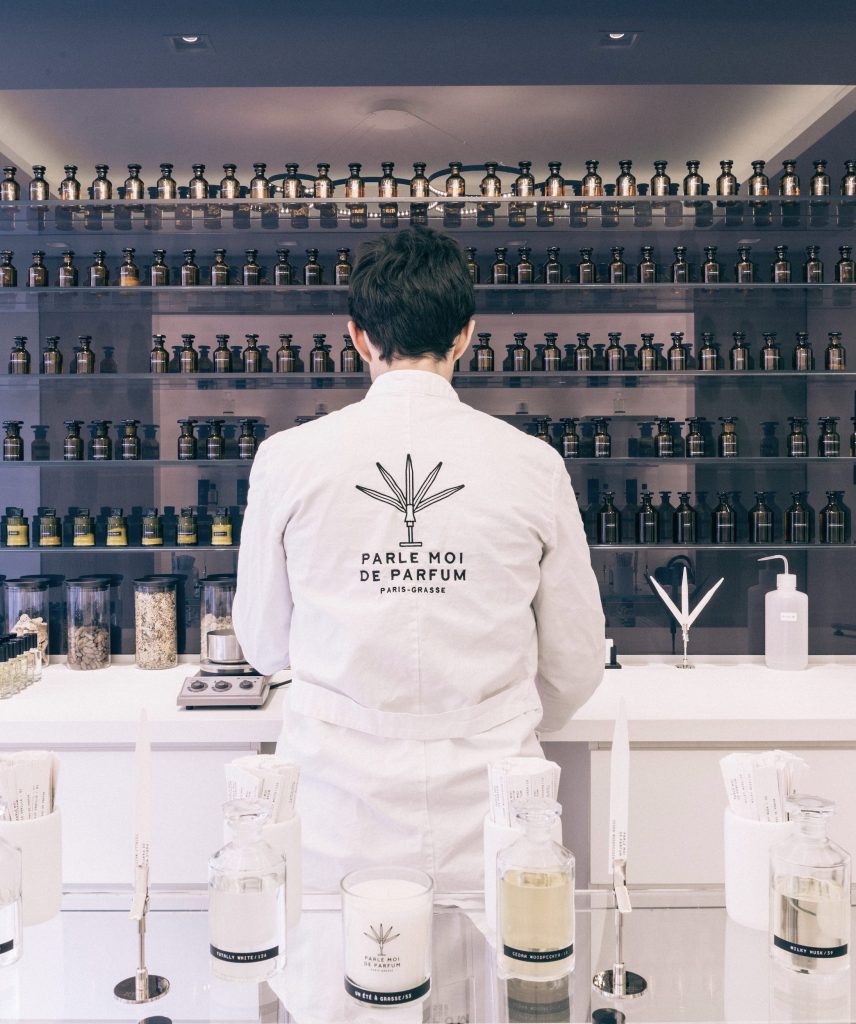 There’s also an evocative simplicity to the names, and a clue to the feeling Michel wanted to elicit for the wearer. Une Tonne de Roses / 8, for instance, is a flurry of rose petals, swags of the blooms strewn in an unrestrained fiesta of a fragrance – just a touch of patchouli used to ground the exuberance with rain-soaked earthiness. Guimauve de Noël / 31 (Christmas Marshmallow) is a delicious plunge into Michel’s childhood memories of festive treats – orange blossom and vanilla-scented cakes, a light cloud of icing sugar and wafts of spiced chocolate.

Flavia Vanilla / 82 is another sweet treat, but this time the vanilla’s darkly seductive, the warm-skin creaminess flecked with black beans and lingering for hours, while Totally White / 126 explores chic simplicity with a transparent overlapping of lilac, syringa, hawthorn and wisteria.

As Parle Moi de Parfum comment: ‘The brand name is a clear declaration of intent: to talk about perfume and nothing else!’. (We’re always happy to do that.) And with their fragrances, candles and a discovery set to explore, Parle Moi de Parfum fragrances most definitely are a talking point for anyone who wears them. Or who smells them…