Wit, beauty and incredible style. If there’s a fashion label which better embraces all of those qualities than Miuccia Prada’s MiuMiu, we’d like to know about it. 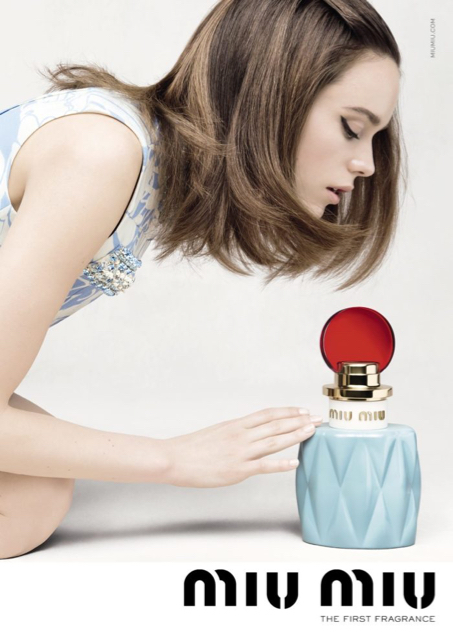 As Miu Miu put it so perfectly themselves: ‘Miu Miu is a brand in love with contradictory women: intelligently frivolous, fearlessly fun, seriously lighthearted, feminine feminists.’

‘Miuccia Prada understands implicitly that fashion is not superficial: it mediates our relationship to the world around us. The power to construct identity – to acknowledge, twist, and break rules – is the prerogative of the Miu Miu woman. It’s her declaration of independence. Her style is the embodiment of these qualities, at once delicate and forceful, refined and raw, demure and outrageous.’

Miu Miu‘s roots go all the way back to 1913 and the luxury leather goods business founded by Miuccia Prada’s grandfather Mario. Following the huge global splash made by the Prada line once Miuccia Prada took the helm, Miu Miu was launched by the Italian designer as a sister ‘accessories’ label in 1993: a counterpoint to what at the time was Prada’s minimalist style. (FYI, Miu Miu is actually Miuccia Prada’s nickname.)

Beloved by fashionistas and editors alike, it soon became an autonomous brand with a signature quirky, avant-garde identity – just like the women who love to wear it. 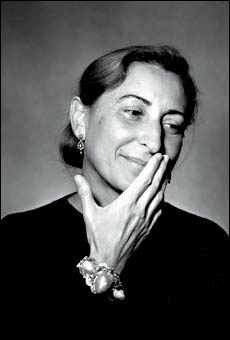 It’s been written: ‘Miuccia Prada is a master of the counterintuitive; she mixes the common and the ultra-refined to create something surprising and knowing yet never contrived.’ Just a year after launch, Miuccia Prada won the Council of Fashion Designers of America Best International Designer Award, for her Miu Miu collections: the ultimate acknowledgment for this coveted new fashion label.

Miu Miu joined the Paris Fashion Week calendar in 2006, and within just a few years, the label – offering its sensual, rebellious take on dressing-up – was occupying some of the most exclusive retail real estate on the planet, in London, New York, Milan, Paris, Tokyo and beyond, offering a playful attitude to shopping and getting dressed.

In autumn 2015, the long-awaited debut Miu Miu fragrance was launched, with an eye-catching ad. campaign featuring actress Stacy Martin, photographed by Steven Meisel. It perfectly embodies these words from Miu Miu:  ‘There is a coy, mischievous quality to everything in the brand; it flirts with, and upsets, expectations. So the first fragrance for Miu Miu is something of a chimera: you can’t quite categorise it because it refuses to be categorised.’ 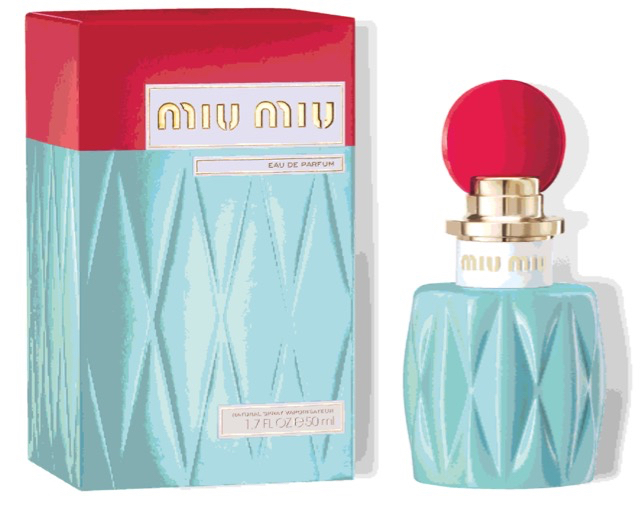 We’ll try, though: a stunning floral with all the beauty of a vintage fragrance, Miu Miu at the same time ultra-modern. In its soft blue pillowed opaque glass bottle (an echo of one of Miu Miu’s iconic matelassé handbags), crowned with a translucent red disk, the fragrance itself is the creation of perfumer Daniela Andrier, who has a longstanding creative relationship with Miuccia Prada.

At its heart is a swirl of lily of the valley, created from a fusion of real jasmine, rose absolute and crisp, synthetic green notes. The fragrance then layers brooding mystery on the dazzling sparkle of the floral notes, via Andrier’s choice of woody, peppery Akigalawood®, a specific extract of patchouli. The result? This surprising combination of flower and earth feels timeless and natural – and very, very Miu Miu.

We’re told: ‘The Miu Miu character naturally rejects the expected, the proper, the reserved, or the clichéd – because the qualities it evokes are elusive: youth, femininity, freedom, and confidence that comes from knowing exactly what you want.’

And with their phenomenally successful first fragrance, Miu Miu have bottled just that…