A family-owned fashion house for over six decades, Missoni‘s intricately woven multi-hued knits have become iconic. Now we unravel their romantic history and fall in love with their so-stylish scents…

If knitwear can have a love story, then surely Missoni’s founders are the stars. In 1948 at the Olympics in London, an athletic young sprinter called Ottavio (nicknamed ‘Tai’) Missoni caught the eye of Rosita Jelmini, a beautiful actress and costume designer. They not only married but set up a small knitwear workshop together in Gallarate, Italy. The first actual collection (under the Missoni label) was presented in the fashion capital of Milan in 1958, and it wasn’t long before the threads of their venture wound around the hearts of some notorious style-makers such as legendary fashion editor Anna Piaggi, who personally mentored and helped guide their style.

Many years later, in a 2003 article tracing the history of their success, marked by a V&A retrospective, influential fashion writer Suzy Menkes described Rosita Missoni as the ‘matriarch of the fashion dynasty of vivid stripes and zigzag stitches… The Missoni story is one of authenticity – that rarest of attributes in the fashion world.’ Menkes went on to explain that, ‘For all their history, the Missonis have embraced modernity,’ and indeed, when Tai and Rosita combined their talents, the world of knitwear – and fashion – were changed forever. They caught the eyes of those who mattered, also championed by the legendary Diana Vreeland, editor of American Vogue, and the business flourished. Before long, a Missoni boutique was opened in the hallowed halls of Bloomingdales.

Having started a fashion revolution, the family they started have maintained the Missoni name. Their children Vittorio, Luca and Angela – the brand’s creative director since 1996 – grew up with those colourful threads woven into their DNA. ‘Closely involved with the business, they took on increasingly responsible roles,’ Missoni explain, ‘becoming co-creators in a project that continues to seduce and excite today.’ 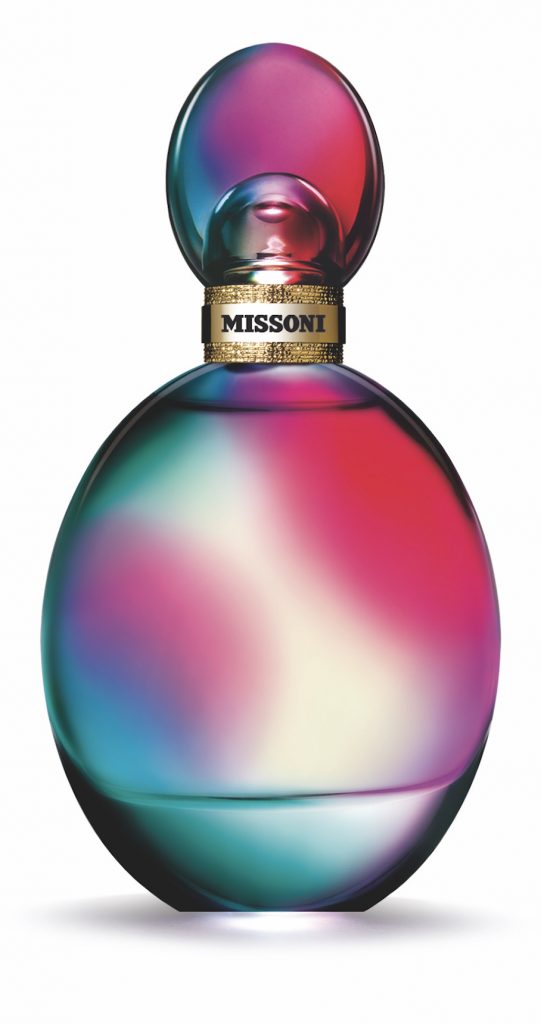 As fashion evolved to mean more than something we simply dress ourselves in, Missoni Home – textiles created in collaboration with Rosita’s family business – has allowed us to clothe our homes in a colourful, characterful style. And having triumphantly revived their fine fragrance line – the first Missoni perfume was originally created by perfumer Maurice Roucel in 1982 – we can now, once again, wear Missoni in a way that tempts us not just visually, but in an olfactory way.

In 2015, rising star perfumer Quentin Bisch wove luminescent white florals through warm, woody notes to create Missoni Eau de Parfum – in the words of Angela Missoni, for ‘a confident woman who wears this fragrance as a dress that glides on the body, enhancing the vitality and charm.’ Missoni Eau de Toilette followed in 2016, the dewy freshness of the flowers played up and enhanced by ripe pear, given some fizz with pink pepper and resting on the fluffiest, musky dry-down that trails deliciously.

And in 2017 Missoni Parfum Pour Homme marked their first foray into male fragrance. Although Missoni describe the scent as being ‘unquestionably masculine’, we find it eminently shareable. There’s a particularly cuddlesome quality to this fragrance – and a deliberate one at that. But we begin with a walk through the lemon groves at dawn, dew-speckled leaves swirled with an early morning mist. The unexpected mix of freshly cut ginger and aromatic lavender proves opposites definitely can attract – zingy spice meeting soothing sandalwood wafts in a scented snuggle we want to last forever. And that base was specifically composed to be ‘…as enveloping as a precious Missoni cardigan.’

Whichever of these you’re drawn to, we know you’ll join us in marvelling at the alchemy that allows texture, colour and touch-me softness to be evoked by a perfume – and in rejoicing at the way Missoni brilliantly weave fashion and fragrance together, to delight our senses.