Katheryn Elizabeth ‘Katy’ Hudson, to give her full name (b. 25th October 1984) – is known to us as Katy Perry: singer, businesswoman, actress and philanthropist. 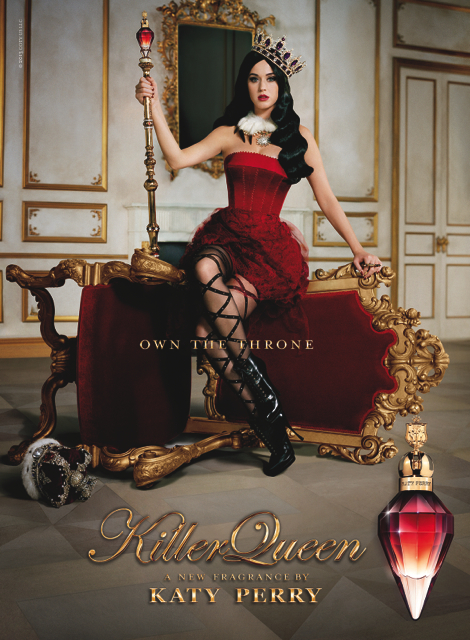 Born near Santa Barbara, California, she moved to LA and as a teenager forged a career as a gospel singer: her first album, launched under her real name, sold more than five million copies. (Katy had a sheltered childhood: no MTV, no Madonna, etc.) As she told actress Kirsten Wiig for Interview Magazine, ‘I started going back and forth to Nashville when I was 15…’ But, she adds, ‘I actually started playing in Santa Barbara at the farmer’s market when I was 13. I’d take my guitar and would test out songs there.’

Katy Perry made it onto most people’s radar, though, with her single ‘I Kissed a Girl’, which created a stir even before the release of her second album, ‘One of the Boys’. And her third, ‘Teenage Dream’, sent Katy Perry into the pop stratosphere: it ties with Michael Jackson’s ‘Bad’ album for resulting in the most No. 1 singles from just one album. Since then, in her rocket-fuelled career, Katy Perry has scooped a slew of accolades – almost 90 in all, including 10 Grammy awards and Billboard‘s 2012 Woman of the Year. (She’s still the only woman to have spent 69 consecutive weeks in the US’s Top 10.)

She’s upbeat, she’s beautiful, she’s sexy, she’s rebellious. But she’s also big on philanthropy: a portion of ticket sales for her ‘Teenage Dream’ tour went to charities such as The Children’s Health Fund, Generosity Water, with a slice of merchandise sales going to The Red Cross.

So: when a singer oozes glamour and fun the way Katy Perry does, fragrance becomes a natural form of expression. Her debut fragrance Purr was launched in 2010, with its so-cute cat-shaped flacon. Next up, Meow. And then Killer Queen (which you can see here): a textured floral scent created by perfumer Laurent Le Guernec, from IFF (International Flavors & Fragrances). 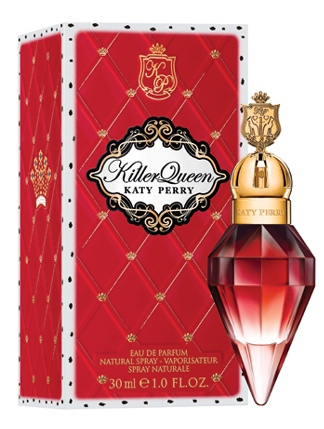 As she explained around the time of launch at a Berlin press conference, ‘It’s called Killer Queen for many reasons;  one, because it was influenced by a Queen song called ‘Killer Queen’, and the lyrics of that song are so important to me, because they speak about a woman who is strong, and sexy and sophisticated, but still knows how to have a good time.’

It has a seriously striking and unusual flacon, inspired by a queen’s sceptre. As Katy Perry told Cosmopolitan, ‘It’s a gorgeous glass that has a kind of ombré (burgundy-to-yellow) finish from the bottom to the top. I wanted it to be like you had a gem in your hand. A real prestigious, royal, rich thing to it. And since it has a theme that I love, I wanted it to have a crown nuance – but instead of going the complete crown route, I wanted to design my own crest [to go] on top. I thought it was very symbolic of monarchy, royalty and over the topness.’

For the advertising campaign (see above), Katy Perry worked with top fashion photographer Tim Walker and director Jonas Akerlund. The film they made is a complete piece of fabulousness. Whether you know Katy Perry and her pop-rock career or not, you surely can’t help but enjoy the incredibly watchable ‘Own the Throne’ ad. for the fragrance watch it here – and we defy you not to smile, and rather fall in love with her.