Often described as the ‘enfant terrible‘ of the fashion and fragrance world, Jean Paul Gaultier is provocative, saucy, rebellious, witty – and a creative genius. 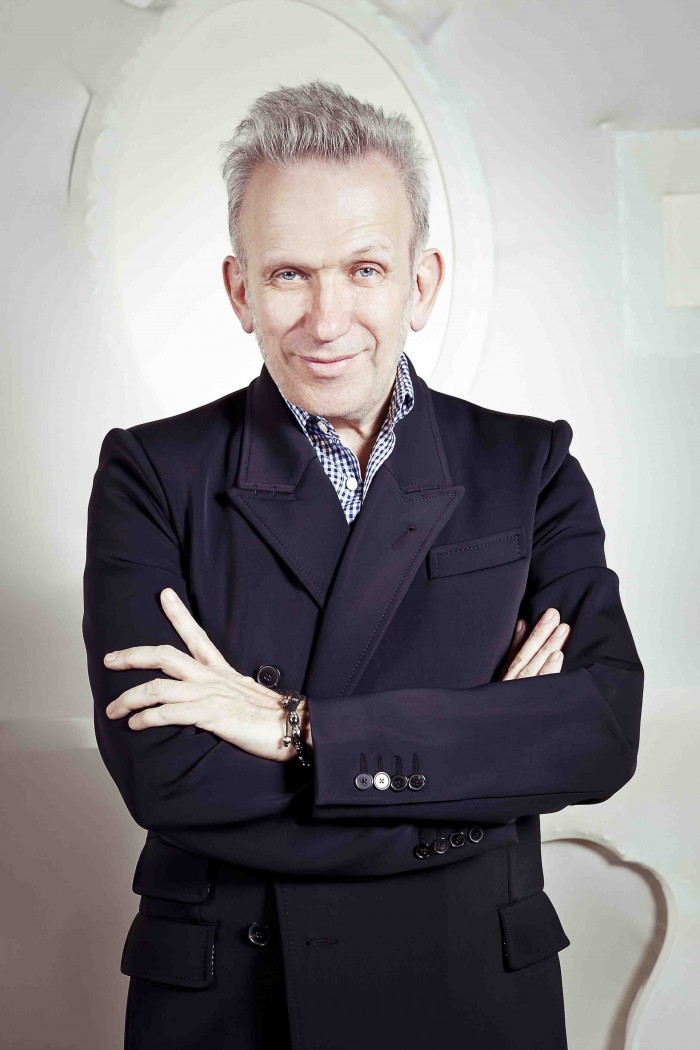 Jean Paul Gaultier (b. 1952) grew up in Arcueil, a suburb south of Paris. His grandmother, so we’re told, was hugely influential: Calèche-swathed Marie Garrabe was a ‘wellness counsellor’ who advised her clients to dress better in order to improve their lives –thus introducing Gaultier to the power of clothes.

Though JPG never attended so much as a day of design school, he landed his first job – at Pierre Cardin – on his 18th birthday, after sending packets of his drawings to 27 design houses. From there, he went on to work for Jean Patou, then back to Cardin, before launching his own fashion house over 40 years ago, using unusual (and inexpensive) materials like braided straw in that first show.

Four decades on, this enfant terrible has become part of the revered fashion establishment, with his own inimitable signature. Breton stripes. Tattoo prints. Corsets. Men in skirts, and other design statements which cross the lines between the sexes. As Jean Paul Gaultier commented after Madonna chose his clothes for her Blonde Ambition tour, ‘Madonna likes my clothes because they blur the masculine and feminine.’ As Jean Paul Gaultier‘s Barbican show demonstrated so vividly, his originality knows almost no bounds. No wonder he was soon the darling of fashion editors the world over. His philosophy: ‘I would like to say to people: open your eyes and find beauty where you normally don’t expect it.’

Hearing the names of his collections tells you all you need to know about Jean Paul Gaultier’s unbridled creativity: ‘Parisian Gypsies’, ‘Sleepy Hollow’, ‘Pirates of the Caribbean’, ‘Boarding School’, ‘Joan of Arc’–and so it goes on. Somehow, in between creating men’s and women’s collections and his couture line, JPG fitted in an acclaimed stint as Hermès’s designer, from 2004-2011 – and designed the costumes for films including Peter Greenaway’s ‘The Cook, The Thief, His Wife and Her Lover’, and Luc Besson’s ‘Fifth Element’. (Oh, and to make a seriously watchable series called ‘Eurotrash’ which was the highlight of many a Friday evening…) 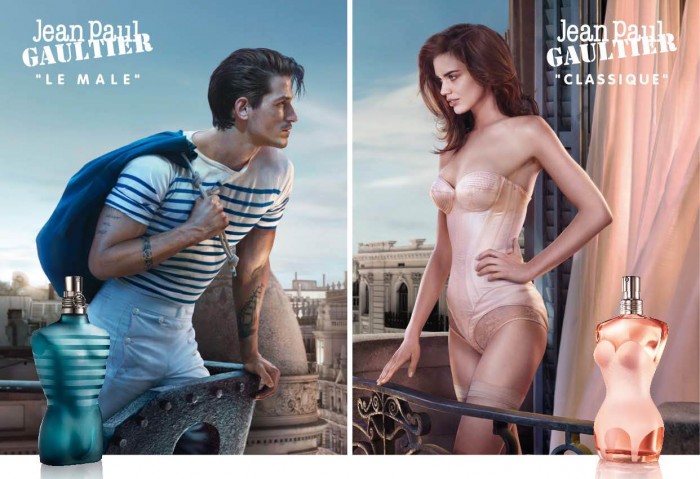 Meanwhile, right when haute couture houses were closing right, left and centre, Jean Paul Gaultier swam against the tide once again: his debut couture show, in 1997, cemented his reputation as a craftsman once and for all, sending not a breath but a gust of fresh air through the couture world. Both Marion Cotillard and Nicole Kidman stepped onto the stage to cradle their Oscars against their Gaultier Paris dresses. (Since The Perfume Society got to see JPG in action at a discussion at his Barbican retrospective, ‘The Fashion World of Jean Paul Gaultier: From the Sidewalk to the Catwalk’, meanwhile, we’re more in thrall than ever to his talent.)

An haute couture outfit may be beyond the reach of most of us – nut since the launch of his Classique fragrance in 1993, we’ve all been able to wear and enjoy a little touch of JPG’s magic and mischief. His belief: that fragrance will always be the first thing our skin puts on. And from the moment Classique was unveiled, with its curvaceous corseted bottle – embodying the designer’s vision of femininity as both strong and generous – it became a massive hit.

And how we love the cheeky ‘tin can’, too, ‘like the ones for cat food at the supermarket’, as Gaultier put it, taken from an original design for a bracelet and now one of the most iconic elements of fragrance packaging in the world…

Classique captures JPG’s own scent memories, from his glamourpuss grandmother: touches of – yes –nail polish and face powder, swirling beautifully with rose at the fragrance’s heart. (Classique soon got a male paramour: Le Male, the first blockbuster creation by maestro Francis Kurkdjian – and the two, as you can see above right, are often twinned in the eminently watchable print ads and cinema/TV commercials…) 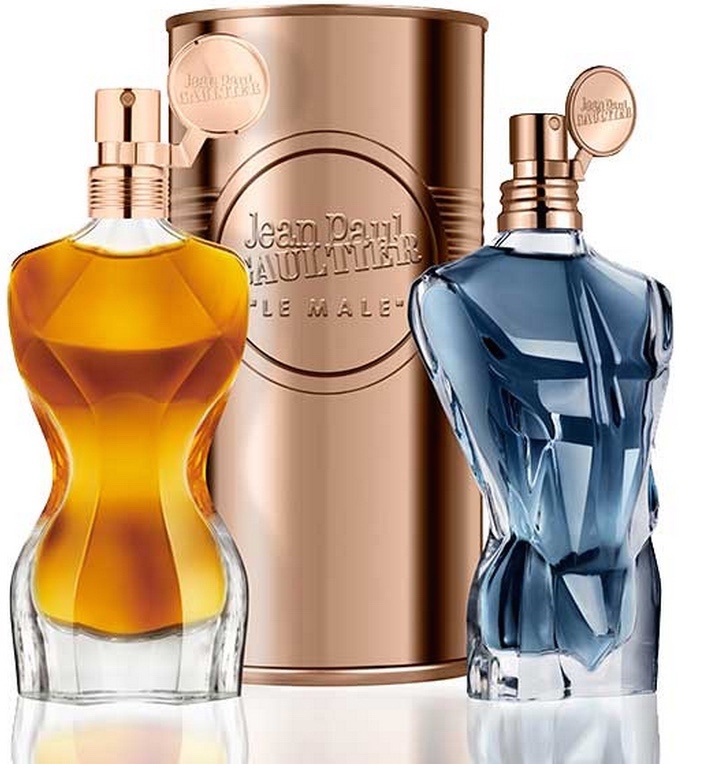 Ma Dame followed. ‘Ma Dame is not a lady,’ Jean Paul Gaultier commented. ‘She is my muse. She amuses me.’The juice itself once again carries Francis Kurkdjian’s flourish: ‘Ma Dame’s signature is short and sharp,’ he explains, ‘like the stroke of a marker on a blank page. There is a great deal of strength and a great deal of softness in this fragrance. The same could be said of girls today…’ So Ma Dame contrasts the zest of orange with an overdose of musk, soft cedarwood underpinning velvety rose – and a drop of grenadine to perfect the fragrant cocktail.

Autumn 2016 heralded a re-visit to his two iconic debut fragrances, with Classique Essence de Parfum and its masculine counterpart, Le Male Essence de Parfum. New ways to wear these iconic fragrances: richer, more intense. Classique Essence – created by Daphné Bugey – teases the senses with its naughty-but-nice notes of whipped cream and spices, sheer and yet enticing, suffused with the richness of jasmine and mellowing woodsily on the skin.

In Le Male Essence, the stellar Quentin Bisch shakes up the original construction, interjecting a burst of spiced citrus with dark leather and precious woods. The familiar bottles, meanwhile, have been strikingly resculpted for a new era. As Gaultier observe: ‘The silhouette has changed, because the world has changed!’ Which translates as: wider shoulders for Le Male, and a more sculpted waist – while the women’s fragrance, as the fragrance house puts it, boasts ‘less boobs, more butt!’

Another stroke of genius from Jean Paul Gaultier. But just one of so many, where this enfant terrible – who we really, really hope never grows up – is concerned…