One of the stars of the perfume world, with a distinguished career at Givaudan, Sonia Constant has now launched her own globetrotting fragrance collection. Join her on Ella K‘s magic carpet ride…

Ella K founder/creator Sonia Constant is surely one of the most widely-travelled perfumers working today. Having trained at ISIPCA, she joined Paris perfume house Givaudan to complete her training, guided by teachers of world renown. She continues to work there today. But alongside her passion for creating fragrances – from Burberry Sport for Men to Montblanc Emblem via Balmain Extatic and Guerlain L’Abeille – Sonia has a deep passion for globe-trotting. 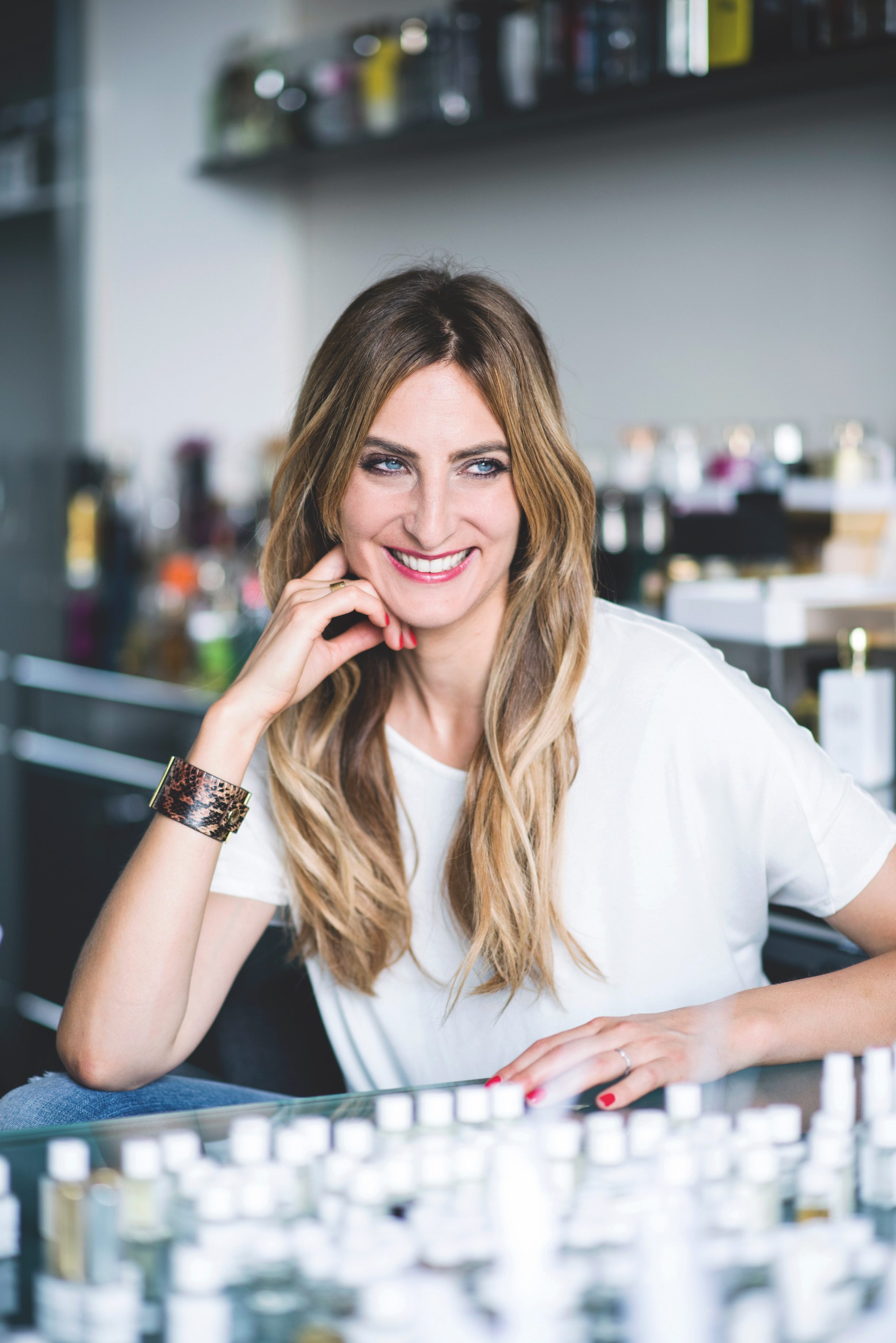 Indeed, when asked by The Perfume Society recently where she draws her inspiration (for our magazine The Scented Letter), Sonia replied: ‘From my travels – flowers, trees, arid landscapes, humid places. Everything I encounter can be an inspiration. It might be a restaurant, a cocktail – when I find something which I think could work in a fragrance one day, I write it in a notebook. My head is like one of those mobiles of the solar system; my brain is the sun and my ideas are moving around in space!’

Sonia voyages with her faithful Leica camera and Moleskine notepad, with which to capture the ephemeral pictures or thoughts, lest they disappear. She also has a miniature ‘head space’ machine, to capture unfamiliar scents which may be analysed, deciphered and stored within her memory, becoming the backdrop for a future creation.

As she puts it: ‘When I am looking at something which inspires me, my head goes into overdrive and assembles the formulae to create a perfume which echoes what I am seeing. There is a paraphrase in Baudelaire’s Fleurs du Mal which has remained with me: “Colours, fragrances and sounds answer each other.” That’s exactly what I feel. Taking the sounds, the colours and the shapes and transforming them into fragrance is something that is almost magical. And for me, an infinite source of inspiration.’

In 2017, in parallel with her work as a perfumer for one of the world’s most prestigious houses, Sonia created Ella K. The venture is a partnership with her husband and fellow voyager, who has a distinguished career of his own, sourcing fragrance ingredients. Ella K enables her to create a collection of exquisite fragrances ‘for people who know about fragrance, understand quality and who are inspired by the stories I create in scent.’

Ella K is a fantasy heroine, inspired by three female explorers from another time: Karen Blixen, Ella Maillart and Alexandra David-Neel. Daring, pioneering, unafraid, they have inspired generations of women since their exploits nearly a century ago.

As Sonia explains, ‘I have always been fascinated by the strength of character that these women displayed to establish their independence and lead the lives of which they had dreamed. With a thirst for freedom, their sheer audacity led to some extraordinary “careers”, she says. ‘I would like to think that in some way, with the Ella K adventure, I am following in their footsteps.’

Ella K, then, invites us to ‘Be daring. Explore. Open the mind to the beauty and diversity the world has to offer.’ An initial collection of eight utterly beautiful fragrances beckons us to join Ella K on her travels, with each inspired by a landscape that has made its mark on Sonia, over the years.

For Epupa Mon Amour, for instance, Sonia reveals: ‘This is about a desert in Namibia, the dryness, the heat, the herbs. The Namibian desert is like the landscape of the moon. We were on our way to the Epupa Falls, but it was a long, dusty, dry road and to recreate the memory I used hot spicy accords including cumin, with guaiac wood, saffron, roasted tonka and vetiver, for the scorched earth.’

And then there’s Mémoire de Daisen In (right), showcased in our Discovery Box collaboration with Harvey Nichols. ‘This composition is above all an invitation to embark on an interior journey sparked by the extraordinary experience of Japanese rock gardens. At first, with sensations mingling inextricably with the garden’s mineral and vegetal ‘life’, I created a cerebral version. The mineral character of the gravel is carried by an accord of Ambrofix, benzoin and nutmeg. The fragrance emanating from the maple wood is evoked by using Kephalis, a molecule with warm woody notes. Vegetation is translated by lush, green notes… [There is a]mixture of rose alba and Japanese peony, whose brilliant notes are associated with the sparkling vivacity of the umquat/bergamot accord.’

Together, Sonia Constant concludes, ‘this translates into a state of illumination, as the ultimate goal for those seeking to attain the immaterial. They form a sort of luminous halo hovering above the mineral accord and help to encompass that state of levitation that people seek when entering this garden.’

In Sonia’s memory chest, she tells us, there are many further fragrant Ella K adventures waiting to be told. Quite simply, we cannot wait to join this perfumer – and her ‘heroine’ – on this scented journey round the world…