Anna Sui is one of the world’s most creative and beloved fashion designers, creating clothing inspired by deep research into vintage styles and cultural arcana. And her colourful, playful ‘universe’ now includes fantastical fragrances… 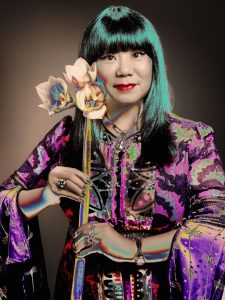 Born in Detroit to Chinese immigrant parents, Anna Sui‘s career is a classic American success story. ‘You have to focus on your dreams, even if they go beyond common sense,’ she’s been quoted as saying. ‘How could this girl from the suburbs of Detroit become a success in New York? It was always that dream.’ And the dream came true.

Before the end of her senior high school year, Anna was accepted to the fabled Parsons School of Design, in New York. Anna became part of New York’s intensely creative underground in the 1970s, forging important relationships in the worlds of fashion, art, photograpy, music and design. After two years at the school, Anna became a stylist – working alongside her friend, the now-renowned photographer Steven Meisel – and designed for several sportswear companies before launching her debut collection in 1981.

Her fashion business blossomed in the 1980s – but what truly launched her onto the global radar was her first runway show, in which her friends Naomi Campbell and Linda Evangelista modelled (or more accurately, supermodelled) the collection.

Her signature is colourful, eye-catching, an eclectic mix of vintage and rock reworked for the contemporary fashionista. And Anna Sui herself lives and breathes the spirit of rebellious young bohemia reflected in her designs – which were showcased in a stunning London exhibition in 2016 at London’s Fashion & Textile Museum. (The Perfume Society was honoured to interview Anna for the show – which left us a little bit in love with the designer, and her creations.) 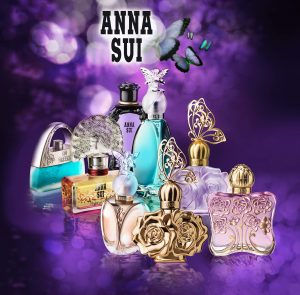 Her inspirations span everything from cowboys to early 20th Century fashion illustration, Kurt Cobain and cheerleaders. As she puts it: ‘I have the best job in the world because anything that I’m obsessed with, anything that I want to learn more about, I put it in my work and that gives me the opportunity to research it and obsess about it.’

Unusually among fashion designers, Anna Sui owns the rights to her own name, which gives her total creative freedom. (And doesn’t it show?) Her empire now embraces a much-loved, colourful cosmetics line – and of course, fragrances, which are showcased in some of the most innovative and smile-making bottles to be found in any scent collection.

As she says, ‘All my fragrances come from part of my world. It’s about the discovery of yourself and your world… I think when anybody talks about Anna Sui, they say: “Oh yeah, she’s a little bit girlie, a little bit rock ‘n’ roll” – but they also say that there’s always a bohemian sort of feel. I love this global gypsy thing; we are all global creatures now and we’re not just influenced by one city, one state, one country; it’s all global.’ 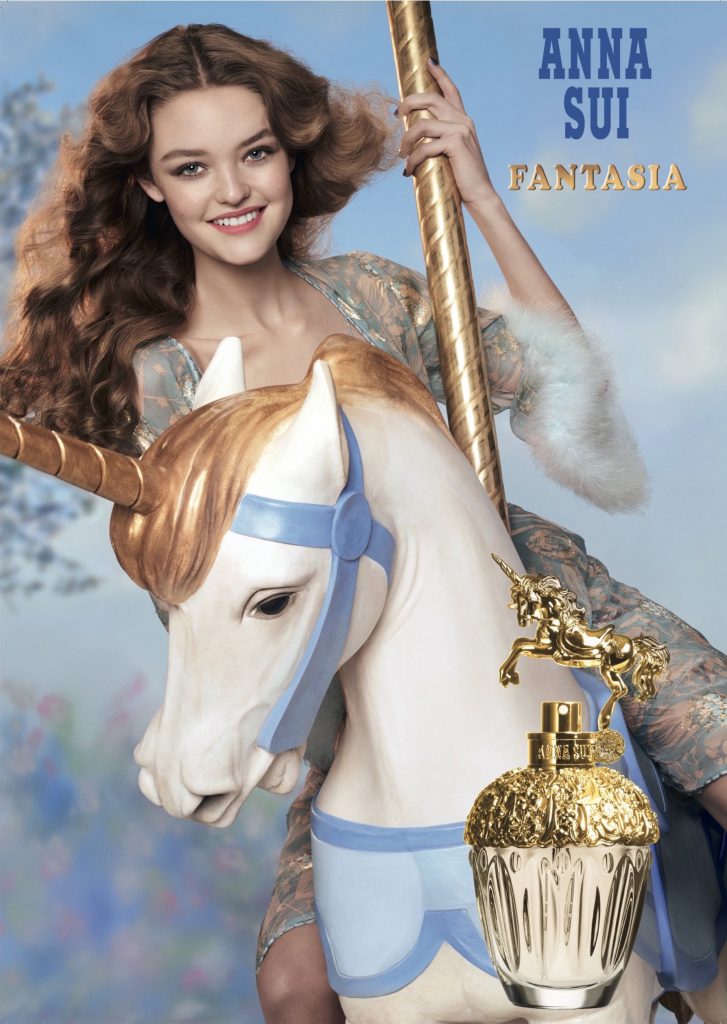 It isn’t only the spritz-worthy fragrances that tap into every perfume-lover’s playful side, but the truly original bottles they are showcased in. Think: just the cutest handbag botte, for Sui Dreams, from perfumer Philippe Romano, which ‘plays on a harmonious multiplicity that is warm and fresh, rich and transparent, sweet-scented and sparkling’, with its notes of bergamot, tangerine, nectar, bitter orange, peony, freesia and rose, nestled on a base of vanilla, sandalwood and skin musks.

Then there’s the silver fairy, adorning the bottle for Anna Sui Secret Wish, which bursts with the scent of fresh lemon, melon and apricot, mysteriously underpinned by cedarwood, sensual amber and cedarwood.

But most eye-catching and irresistible of all, perhaps, is Anna Sui Fantasia, enfolded in golden flowers and with a gilded unicorn atop the flacon, embodying Anna’s magical universe – and a bottle that surely belongs in the collection of every collector. A huge global success since its launch in 2017, Jérôme Épinette‘s juice is introduced via pink pepper, cassis and pink pomelo, softening to a heart of raspberry praline, violet, orange flower and pastel orchid, with an enduring, fresh-woody finale of golden cypress and Himalayan cedarwood. And the name couldn’t be more perfect. As Anna says, ‘I talk about fantasy all the time…’

Like her elecitic and collectible (and somehow remarkably timeless) fashions, Anna Sui‘s fragrances are like a doorway to a magic kingdom – a world of fantasy far removed from our everyday lives. But – such is perfume’s power – where we can all hang out with this coolest of designers, via a single scented spritz…