If we live till we’re 80, we have 4160 Tuesdays. So the philosophy of copywriter-turned-perfumer Sarah McCartney is: better make the most of every single one of them. 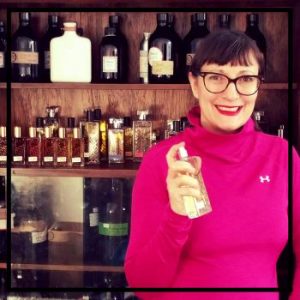 Which is why, after years of writing engaging copy for corporate clients, Sarah decided to follow her passion – and create fragrances for a living. Very successful fragrances, too, with 4160‘s Maxed Out and Midnight in the Palace Garden both being shortlisted for the coveted Fragrance Foundation Awards 2016 in the ‘Best Indie Scent’ category.

Writing for LUSH for 14 years, Sarah learned all about the essential oils which founder and perfumer Mark Constantine used in his cosmetics. After acquiring and studying over 200 books on cosmetics and perfumes, her first experiment was helping her nephew make a simple eau de Cologne for his mum. Made with citrus fruits and lavender, it had a drop of exotic boronia from a small kit of rare ingredients donated by the LUSH factory manager.  ‘We created a simple Cologne, with citrus and lavender but also that very special, exotic boronia oil…’ 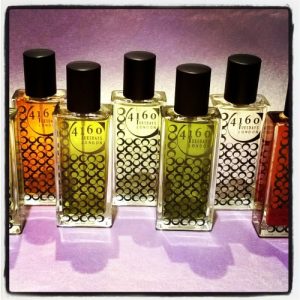 But as she played around some more, Sarah began to imagine turning a hobby into a business. ‘What happened was that I left LUSH to follow some ideas I’d had, including writing a novel,’ she told Basenotes. ‘In the book, there’s a woman who makes perfume to remind people of a time when they felt happy, to help them through their problems. I spent too much money trying to find perfumes that matched what I was describing, and they still weren’t right, so I set off on my quest to make them myself. Then when people asked me how the novel was going, I’d tell them what it was about. They’d either ask if they could read it, or I’d make them a perfume. So I turned into a perfumer.’

Happily, this life-long scent-lover also happens to have a background in Maths and sciences – a rather unromantic but essential requirement for a career in perfumery.  Combine that with Sarah’s marketing wisdom and experience, then, and the result is 4160 Tuesdays – which got its name ‘because that’s how many Tuesdays we have in an 80-year-old lifespan.  So let’s use them to write, think, make and do lovely things.  Or if that sounds great but you don’t have time, to buy lovely things other makers have put together.’ (And as she points out, it’s not as if she could have used her own name:  Google ‘perfume’ and ‘McCartney’ and Stella’s name comes up about two billion times before you get to hers.  For now, that is…) 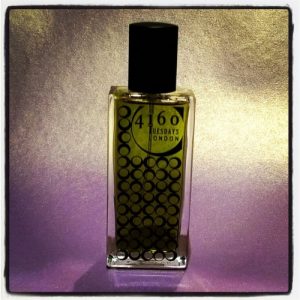 Which in this case means any one of well over 20 different scents which glory in names like The Sexiest Scent on the Planet Ever (IMHO) – named after a comment made by a Tatler beauty editor who smelled it: a dash of bergamot, a soft hint of creamy vanilla, velvety smooth woods, musk and ambergris. Sunshine & Pancakes sets out to evoke the 1970s British seaside family vacation, opening with a burst of sunny citrus, with jasmine to represent sun-warmed skin – alongside honey and vanilla (the pancakes element). The Dark Heart of Old Havana is based on a 1998 trip to Cuba: sugar, tobacco, coffee, fruit, warm bodies, ‘alcohol, exuberance and recklessness,’ as she puts it.

There is a full interview with Sarah McCartney in our ‘Noses’ section of the website here. Aside from fragrance creation – she’s now stocked at Les Senteurs, Fenwick Bond Street, Roullier White, Lucky Scent (in the US) and Indiescents (Canada) – in which her light-hearted side is allowed free rein. She is boundlessly creative – writing a series of light-hearted murder mysteries to accompany her Crimes of Passion fragrance line, for instance (pictured below left). And when she wants to launch a new collection? She’s been known to crowd-fund it. 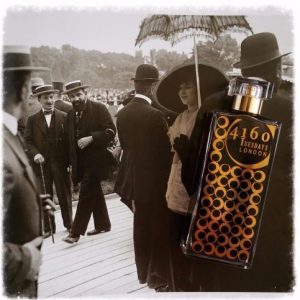 Sarah McCartney also has an impressive collection of vintage fragrances, and offers workshops and courses at her West London studio. Her courses include a fun and fascinating event called ‘The Wall of Scent’, which she describes as ‘a friendly afternoon for novice noses, with home-made cake, tea, coffee and sparkling wine – for those using public transport, of course.’ (Check out listings for Sarah’s upcoming courses here.)

We’ve read a lot of perfume house philosophies in our time, and few put a smile on our faces like this. ‘4160 Tuesdays is all about being creative, mindful observation, nerd-like fascinating, endless exploration and – fingers crossed – mixing it all up and having good ideas. At least once a week. If we can’t be bright and brilliant every day, at least let’s have a crack at making Tuesdays interesting.’

Although frankly, there’s more than enough to explore in the perfumed portfolio of 4160 Tuesdays to keep most of us interested seven days a week.