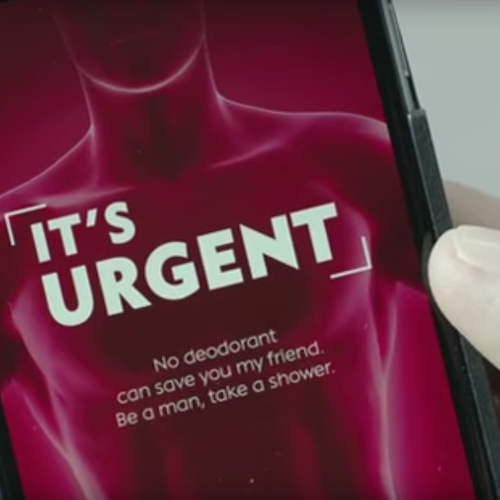 When the heat rises and armpits emerge from beneath layers of jumpers, coats and jackets, commuters hold their breath in anticpation of the inevitable olfactory onslaught. With the premise that our noses eventually become attuned to the scent of our own sweat, Nivea have developed a digitised nose for your phone – an app they say scans areas of men’s bodies particularly prone to funkiness (and we don’t mean dancing to James Brown).

Having analysed the area – based on a specially produced algorithm that previously evaluated the scent of 4,000 other males – the app warns concerned men of their potential whiff-factor, rating their particular smell from ‘it’s okay’, through ‘it’s time’ and the climactic klaxon of ‘it’s urgent’. Nivea’s NOSE has been created by Geoffrey Hantson – a Belgium-based chief creative officer behind the so-called “smellphone” technology. Having been beta-tested in Belgium, worldwide whiffing is soon to commence, with the app then to be launched simultaneously on AppStore and Google Play, and a consumer version hoped to be released shortly afterwards. Watch Nivea’s video below for an insight into how it all works…

Meanwhile, the rather appropriately named Nosang Myung – a UC Riverside professor who’s invented an electronic nose to be used for sniffing out potential dangers to human life – said although the technology is in its ‘most simplistic form’ it could possibly work through only having to detect levels of sweat. On his rather more intricate technology, which he hopes could detect hazards such as dangerous levels of gas in the air we breathe (or even bombs) Professor Myung commented, ‘we developed a nose. A smartphone has an eye, so we just have to put on the legs. So now, I call it an electronic sniffing dog. Places you don’t want to go, instead of sending a dog, you can send this robot.’

Could this digital form of smelling lead to perfumers being replaced by robots? Well, the Noses we know can rest easy for now, as the human olfactory system is so highly complex and nuanced that scientists are still beavering away to understand it fully, let alone reproduce it. Hanston remains optimistic about the future for digital technology in harmony with scent, however, telling Huffington Post that although Nivea to will have to sell the sensors separately – currently the sensory technology is embedded in hard covers for phones – he’s pretty sure the technology will eventually be integrated into the integral structure of an actual phone ‘within a couple of years’.

While parents may be rejoicing at the perfect present for their teenage sons, some might suggest that if one is dithering about whether or not to apply deodorant, perhaps top it up anyway, just to be on the safe side…?

Category: News
Tags: scent, sweat, phone, odour, odor, nivea, digital, deodorant, bo, app, body, beauty, smell, nose, grooming, technology
Recommended Posts
RECENT POSTS
CHECK OUT:
LATEST FROM OUR SHOP
Follow By entering your email address you agree our blog partner (BlogLovin) sending you emails with our latest blog. You can always unsubscribe. We do not pass your information to anyone else. See our privacy policy.