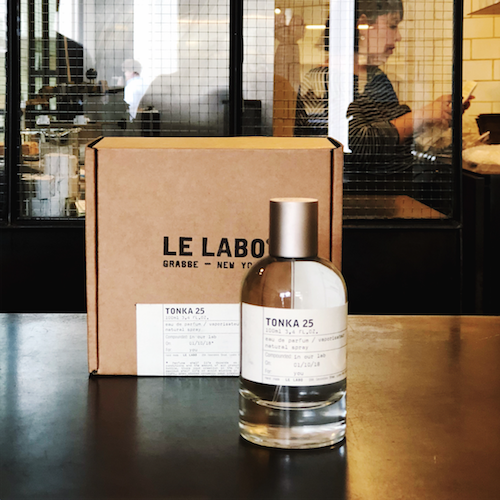 Le Labo is something of a cult brand – so any newness from them is classified as a pretty big deal. The highly anticipated Tonka 25 is the first scent they’ve launched in three years. With perfume house launches becoming more and more frequent, that’s quite a gap between scents – but it’s well worth the wait. We caught up with co-founder of the brand, Eduardo Roschi, at Le Labo‘s Beak Street boutique to find out about the inspiration for Tonka 25, the beginnings of Le Labo, and his favourite smells…

Le Labo fragrances often seem like unexpected interpretations of what they say on the bottle. Was it always your intention to surprise with your scents?

I think our intention was to surprise people but not in a way that was overly confident. To be able to say I’m going to surprise people in perfumery is extremely boastful. In terms of what we believed could be a surprise – I would reduce that to our universe to make it humbler. We know perfumery, we know what’s out there, and we wanted to do some things that we thought were different.

Naming the ingredients was a protocol, which was to take the ingredient that was used the most in the formula, and to add the numbers of other ingredients in the formula. But some ingredients which are heavier, in terms of dosage levels, are less potent than some which you don’t need to put as much of, so if you put a drop of civet it’ll smell intensely of that. But you can put tonnes of Hedione, which you can barely smell – so that’s how some names became surprising.

The original idea of surprise was more in terms of what the perfumes smelt like. We realised calling something that smells of neroli or jasmine or tuberose simply by that name was a surprise. But we decided that what it is, that’s how we’re going to name our perfumes; we’re not going to call them romantic or poetic names or something that gives more hints of what it really smell like.

Ingredients can be something that people are disconnected from when smelling fragrance and often don’t know what they are. Celebrating that is actually quite inventive.

It’s what perfumers do. When we’re developing a new scent with a perfumer, there are code names for different things. We don’t start by calling a perfume Tonka 25, because we don’t know what will be in it. So, we’ll give it a code name, and once they have a code name, they’ll give it a number of trials, a number of samples. So, a perfume will be called XX1, 2/a, 3/b etc. We thought it was very simple and we figured with the brand being a perfumer’s lab, it wouldn’t make sense to call a scent something fancier than what it was called in the lab.

What was your code name for Tonka 25? 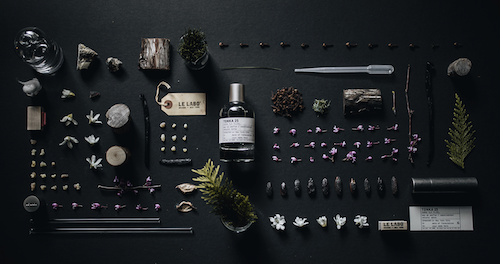 Why do you think Le Labo has such a cult following?

Because we do things with our heart and with the right intention. You cannot hope for cult following, if you look for cult following. But cult following is based on emotional connection and imperfection and if you are just genuine with how you do things and you do them with passion and the intention of doing the right thing, which is not always easy to do, then human beings, which are imperfect beings, will connect to that and it’ll create emotions which are more intense. It creates culture – versus things which are so thought out they are more sterile. For us that’s what cult following is. It’s an honour to be called that, to be honest, and we’re glad that some people think that we’re a cult like brand – but it’s basically Fabrice and I doing (and everyone that works for us doing things) that come from what we truly believe in. And guess what? People are looking for things have meaning, in any field.

How did you get into fragrance?

I studied chemistry, because I wanted to please my parents – I still need to sort that one out. I was too scared to drop chemistry when I realised that it wasn’t something I wanted to pursue professionally. Thinking I wanted to do something a bit funkier that would give some value to my chemistry degree, and that’s when I started working for Firmenich [the perfume and flavours developing company]. They valued my chemistry degree and they did perfume stuff, so it was kind of funky. And that’s how I started to work in perfumes.

What did Le Labo look like when it began? How has it been experiencing the rapid of something you created?

We started Le Labo sincerely not knowing what it would become, we had no ambitions for it. We were both (Fabrice and I) working for L’Oréal at the time, which is a big corporation, who do things in a very specific way, who market research products etc. 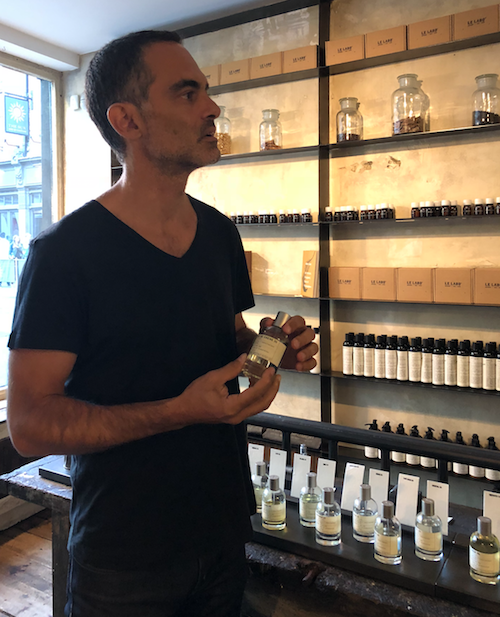 Was it a store to begin with?

We started with a store in New York, 233 Elizabeth St, in Nolita New York, which is today our flagship and our bestselling store. And it took time for it to become a success, but it did, and it helped us understand that we had something interesting, that we were doing something in a very good way. It gave us confidence and funds to continue to develop Le Labo, and we started opening more and more stores

Everything was developed organically, we had business plans but every month they wouldn’t be relevant anymore, so we just thought ‘screw business plans’, and we started to do things with our gut. Like ‘where do we want to go? Do we want to be in Tokyo?’ We’ve always loved Japan so we went there. We never looked to be in places that we would have to beg to be in. And it just became an easy thing to do, because it’s just who we were as human beings.

And it all grew from that one store. It’s a perfect story really. Lots of work, some talent, tonnes of love, and just being at the right place at the right time. Meeting the right people that helped us along the way. We’re very grateful.

Tonka is normally quite a soft, sweet, comforting ingredient. Why did you choose to take it to the dark side with Tonka 25?

Actually Tonka 25 is not about Tonka. It’s about Cedar Atlas. That’s why we called it Holy Wood in the production stages. I love Cedar Atlas. But we had to tame it. We worked with a perfumer to give it a sensuous nature – our comfort zone is dark sensuous perfumes, we like to do other things, but that’s what we really like to play with – so how do you make Cedar Atlas wearable? And with a sensuous dark tone? With tonnes of different ingredients and tonka was one of them, and as we started to add more it became more interesting, there’s 23 other ingredients in it but tonka really took it there. And tonka smells of almond, vanilla, coffee, caramel, warmth, and cedar atlas is a pungent wood that sort of marries well with tonka.

The construct is between tonka – who is the nice guy – and cedar – who is someone that needs to be calmed down.

I would say that Tonka 25 is like a perfume paste – its like a dark, dark perfume paint that you can paint your body with. It doesn’t fill a room with smell, it stays for a very long time on clothing and skin but it doesn’t overpower. It’s very dark but gentle, feminine, masculine, nice and bad.

What are your five favourite smells?

1. My girlfriend’s temple. She taught me this, it’s the temple, not the head, that smells. Your head can smell of your hair, clean or unwashed, but it’s the temple that creates a specific smell. She used to smell my temples and then I started to smell hers

2. The breath of my children. It’s probably disgusting when they’re not your child, but when it’s your kid and she jumps in the bed and breathes all over you, it’s so good. It’s an animal smell. Which has got to be unconscious, it’s pheromones, there’s no way you could rationally say it’s a good smell. It’s bad breath for a child.

3. Bad smells. We lived in Hong Kong when I was young, and the smell of filthy harbour, that’s always stuck in my memory.

4. Perfume. Rose 31 has been the signature of what Le Labo was and started. Of course, when you talk about Le Labo now, it’s Santal 33, but Rose 31 is more intimate for me. It brings us back to the times we were just starting, and for the first five years of the brand. And then there’s other brands that I absolutely love, as well, and who do amazing perfumes. And the perfumes I wore when I was child, like Drakkar Noir (by Guy Laroche), it was a huge scent in the eighties.

Out now at Le Labo

Categories: Slider, News, Launches
Recommended Posts
RECENT POSTS
CHECK OUT:
LATEST FROM OUR SHOP
Follow By entering your email address you agree our blog partner (BlogLovin) sending you emails with our latest blog. You can always unsubscribe. We do not pass your information to anyone else. See our privacy policy.