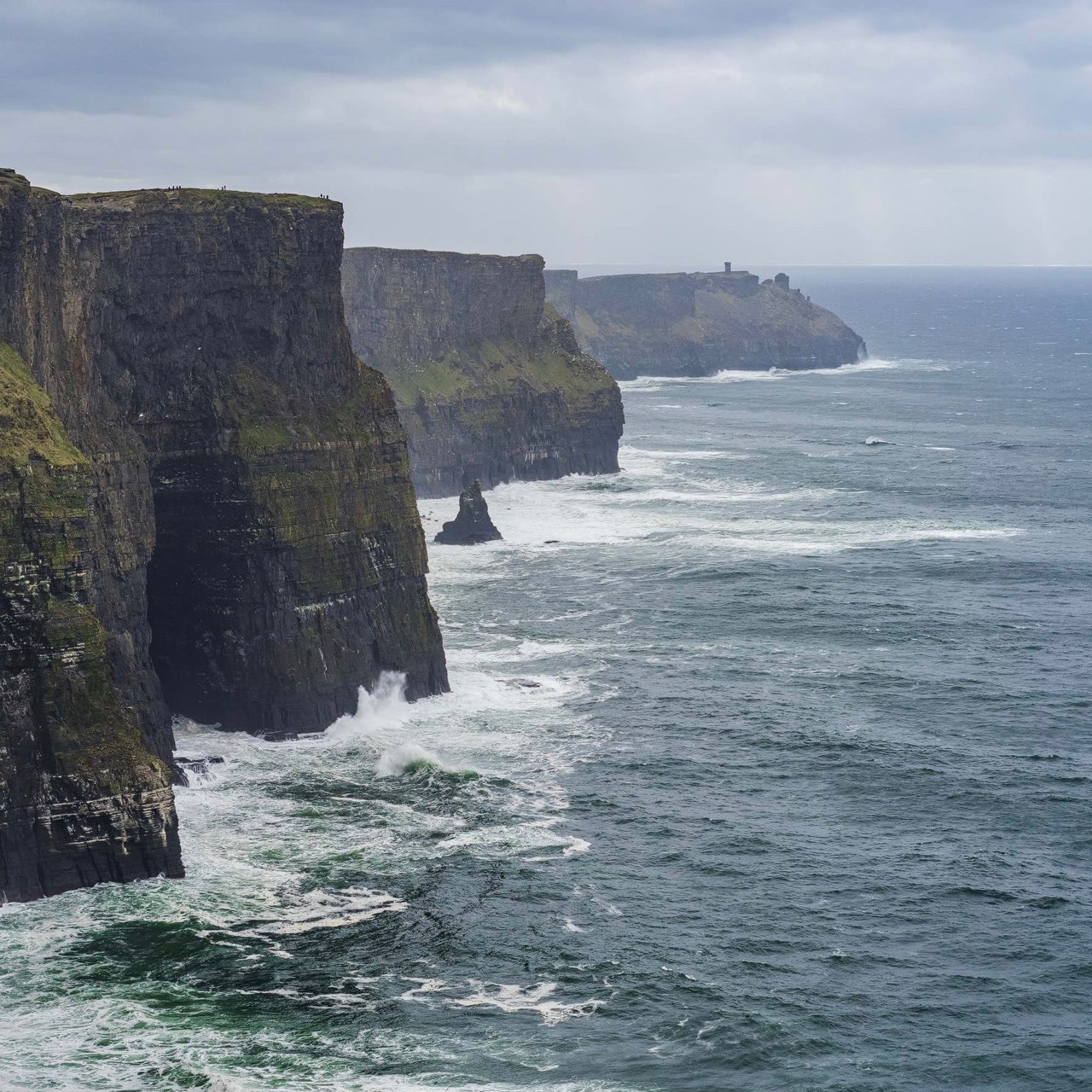 We know that perfumers often talk about people, as muses. But places…? Kate O’Brien explores the role her home country, Ireland, has played in inspiring perfumes (and indeed, new perfume houses…)

Growing up on the rugged west coast of Ireland during the 1970s and early1980s, the haunting lyrics of French singer Michel Sardou’s Les Lacs du Connemara resonated deeply: ‘Burnt earth in the wind, stone moors around the lakes, it’s for the living.’ These words that captured this raw, wild landscape so evocatively will stay with me forever. I vividly recall my intrigue as to how a celebrated French singer could feel so inspired by my little corner of our great big world and often questioned what it was it about Ireland that so inspired writers, singers and creative folk. As I grew older, I realized the answer was always there, right in front of my eyes.

While our writers, poets, singers and artists travelled the world, think Yeats, Synge, Beckett, Joyce amongst many others, the country has always remained a powerful muse. Back in the 1980s and 1990s anyone with a desire to follow their dreams was compelled to travel, as the opportunities for making a living at home were few. John Molloy, CEO and co-founder of MEMO fragrances, is one such export. Reared on a farm in the midlands of Co. Tipperary, he had big dreams, leaving home1993. He now lives in Geneva, yet remains firmly bound to his Irish roots. ‘Storytelling is what we do. We even have a word – seanchaí – for traditional Gaelic storytellers, who acted as important custodians of history at a time when nothing was written down. Perfumers, like the seanchai, are storytellers, capturing memories and emotions in an olfactory form. Perhaps it’s the power of these combined that lends Ireland to being a muse for perfume-makers.’ 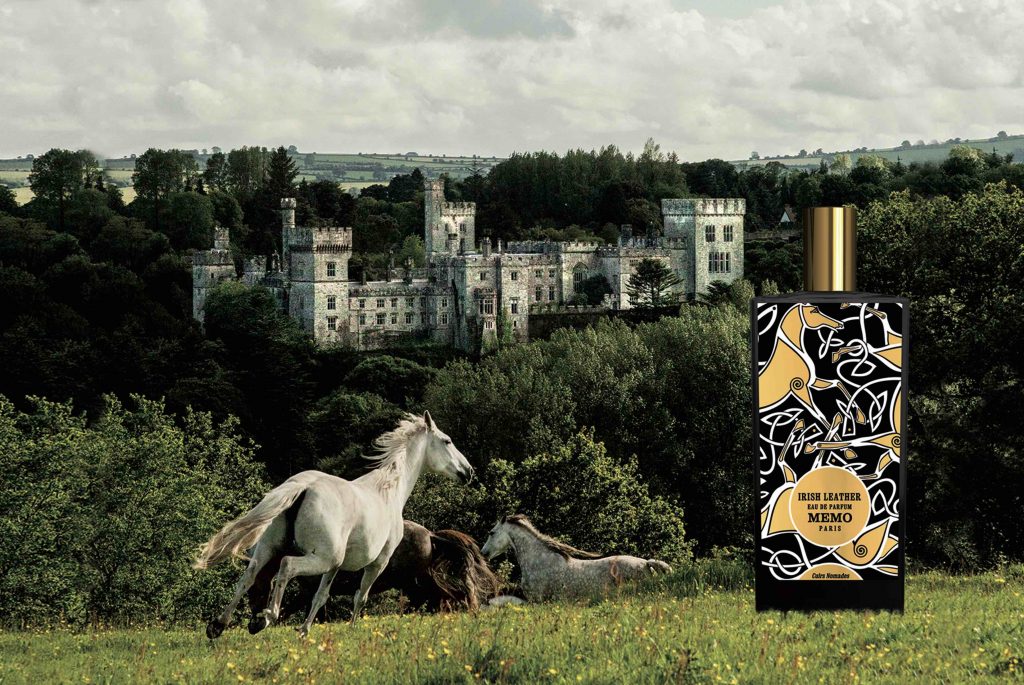 MEMO Paris was founded by Molloy and his Parisian wife, Clara, in 2007; one of their bestsellers is Irish Leather Eau de Parfum, inspired by the untamed Irish spirit, and created by perfumer Aliénor Massenet in 2013. ‘That raw, intense greenness of Ireland, its rugged shores and freedom is what we wanted to capture in Irish Leather,” Molloy explains. “There’s something leathery, lavender, fresh mint and something grassy and green that seems to melt together and smell like an extremely clean barn – saddles and hay and old wood and just a hint of freshly-washed horse.’

Filmmaker Margaret Mangan, meanwhile, founded Galway’s Cloon Keen Atelier on the Wild Atlantic Way in 2000. Her Castaña perfume is the first Irish fragrance to receive the coveted ‘Five-star Masterpiece’ award by Luca Turin and Tania Sanchez in their much-discussed book Perfumes The Guide 2018. ‘We have amazing mythology in Ireland – our literary culture, our music and the culture of our diaspora. Ireland is so romantic too, which fits well with the ideals of perfumery.’ 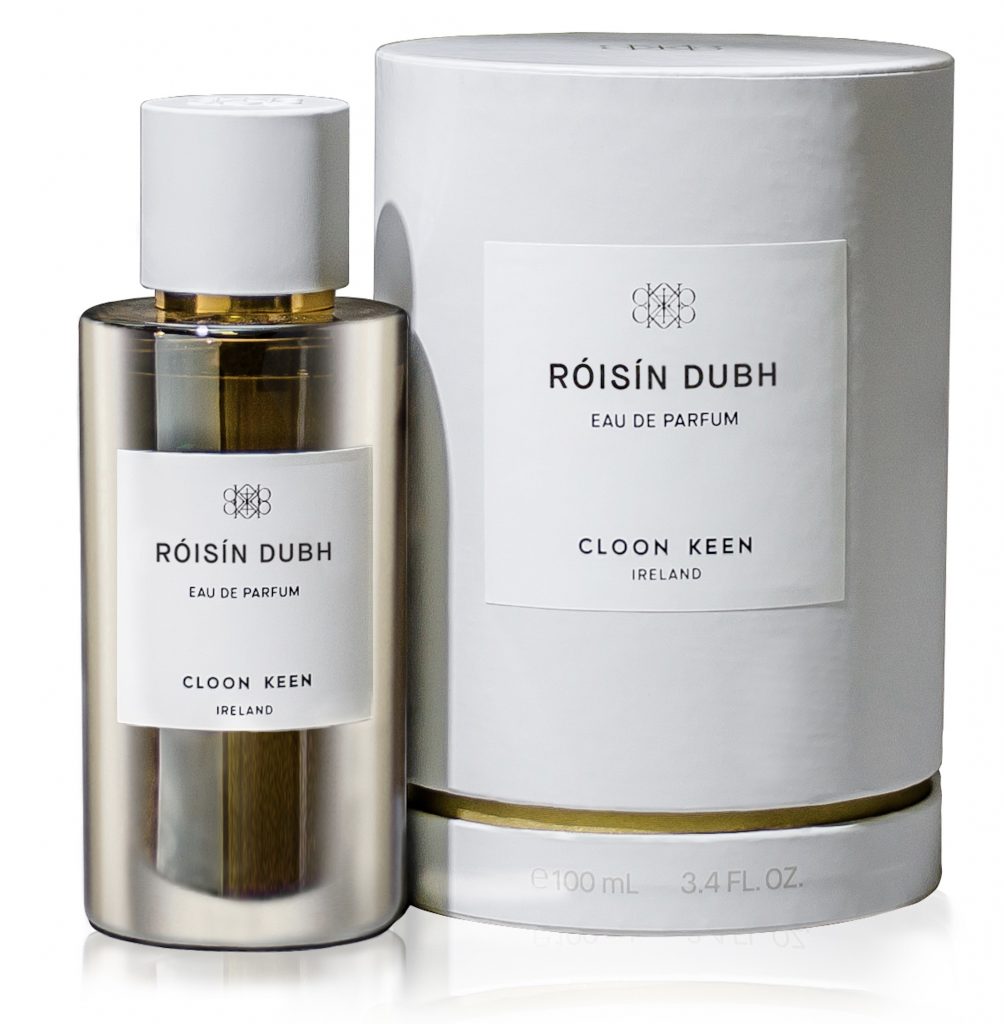 To bring her latest creation Róisín Dubh to life, Mangan chose a fellow West-of-Ireland native, Meabh Mc Curtin. Originally from Co. Clare, McCurtin is an award-winning trainee perfumer at the IFF (International Flavors and Fragrances) in Paris, where her mentor is one of the industry’s finest, Dominique Ropion, creator of the legendary Portrait of a Lady, among many other fine fragrances.

‘My mother is an English teacher and our house is full of books by Irish writers. Growing up I was always hearing about Joyce, Beckett and Synge going abroad and creating this community. We wanted to celebrate the Irish diaspora and how historically they’ve been such an important part of Irish literary and artistic culture. Róisín Dubh, the little black rose, is a character in an ancient Irish song, but she is also an analogy for Ireland itself,’ she explains. She visited the cafés these writers frequented trying to understand the society they were living in during the 1920s and 1930s. ‘This uniquely Irish perfume, inspired by the spirit of some of our most famous writers is a scent with a time and place, the cool earthiness of patchouli and lightly leather rose makes it so evocative and elegant.’

Mc Curtin feels that the country’s deep, evocative history lends much to draw on in terms of inspiration and narrative for creating a perfume. “In the past two hundred years alone we have experienced famine, massive emigration, a struggle and triumph to become an independent republic, and more recently huge social change that is both energizing and uplifting. That is all reflected in our rich culture of poetry, drama, literature and music.”

Still in Co. Clare, this time a huddle of ivy-clad whitewashed cottages at the end of a narrow winding road through the Burren’s rocky terrain, where English-born perfumer Sadie Chowen has called home for the past 30 years. She took over The Burren Perfumery, the country’s first perfume house that was originally created by local poet and plant distiller Brian Mooney in 1972. Mooney’s capsules of time remain bottled in old brown apothecary glass in the Perfumery shop. Chowen has modernized and expanded the perfume range, adding organic skincare, cold-process soaps, candles, herbal teas and essential oils, with everything made right there on the premises. 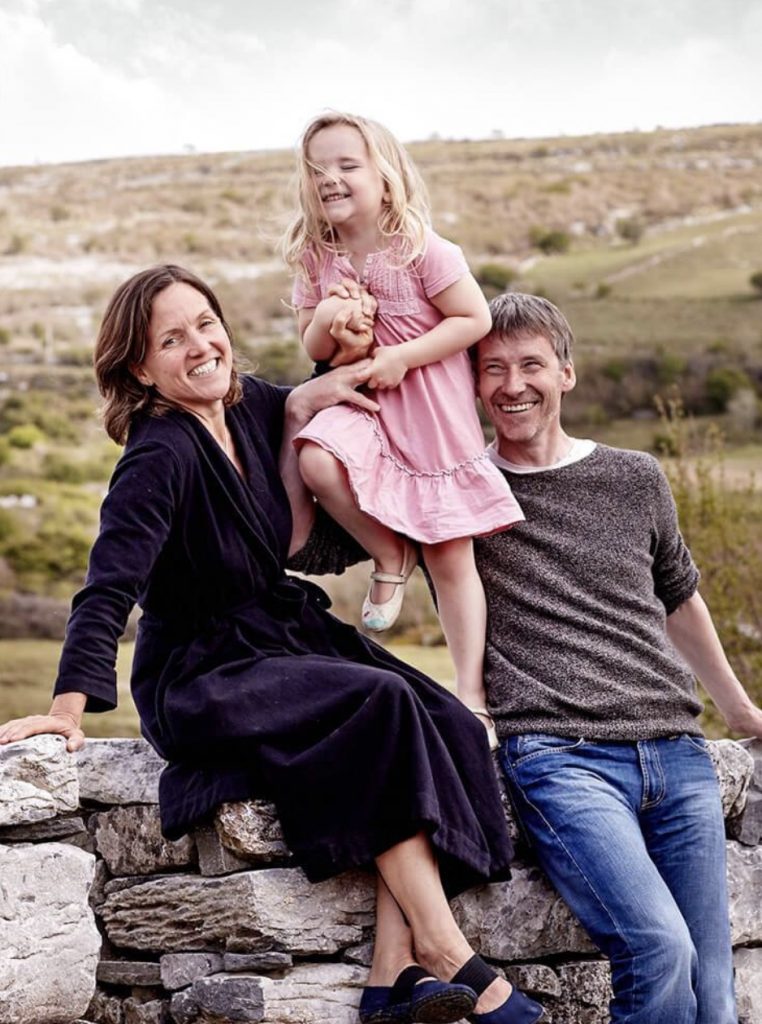 The dramatic UNESCO-protected Burren landscape with its fossil-rich limestone hills, dramatic sea cliffs, rare natural habitats and unique floral gatherings, is home to 70 percent of the country’s flowering plant species, as well as abundant legacies of human settlement dating back over 6,000 years. ‘It’s the wildness, the plants, the colours and the weather, of course!,’ she adds laughing. ‘This is my recreation of the Burren landscape and I don’t think I would have worked in perfume if I lived elsewhere.’

Working with a nose based in Paris, she formulates all her own fragrances, using scents that reflect the Burren, such as organic green leaf, meadowsweet, wild fragrant orchid, nettle, fennel, mint and the subtleness of wild rose. “The west coast of Ireland is relatively unspoilt. There is a wildness that allows us to experience her raw materials. For example, Winter Woods perfume is the woodlands of the west in winter, with pockets of herbs, like rosemary, marjoram, lavender and powered iris root (for softness), all on a warm wood base.” She chooses ingredients that grow in the area, but have not been grown there (mostly) as the practicalities of producing sufficient quantities on site makes this impossible.

Danielle Ryan feels that her Irish heritage has given her a different approach to scent, being drawn more to the green sharp scents then the floral. Founder of ROADS perfumes in Dublin, Ryan is the child of a Sri Lankan mother and Irish father, so travel is in her genes. Her herbaceous scent Bitter End is inspired by Ireland’s west coast where she spent many summers as a child. ‘This area is beautiful, but barren, a place of isolation. We are a very artistic nation, the land around us informs our stories. Also being a small country we have to accept and warm to the idea of small production and craft. I think this attitude is apparent in the way we approach fragrance: Pure and very well thought through.’ 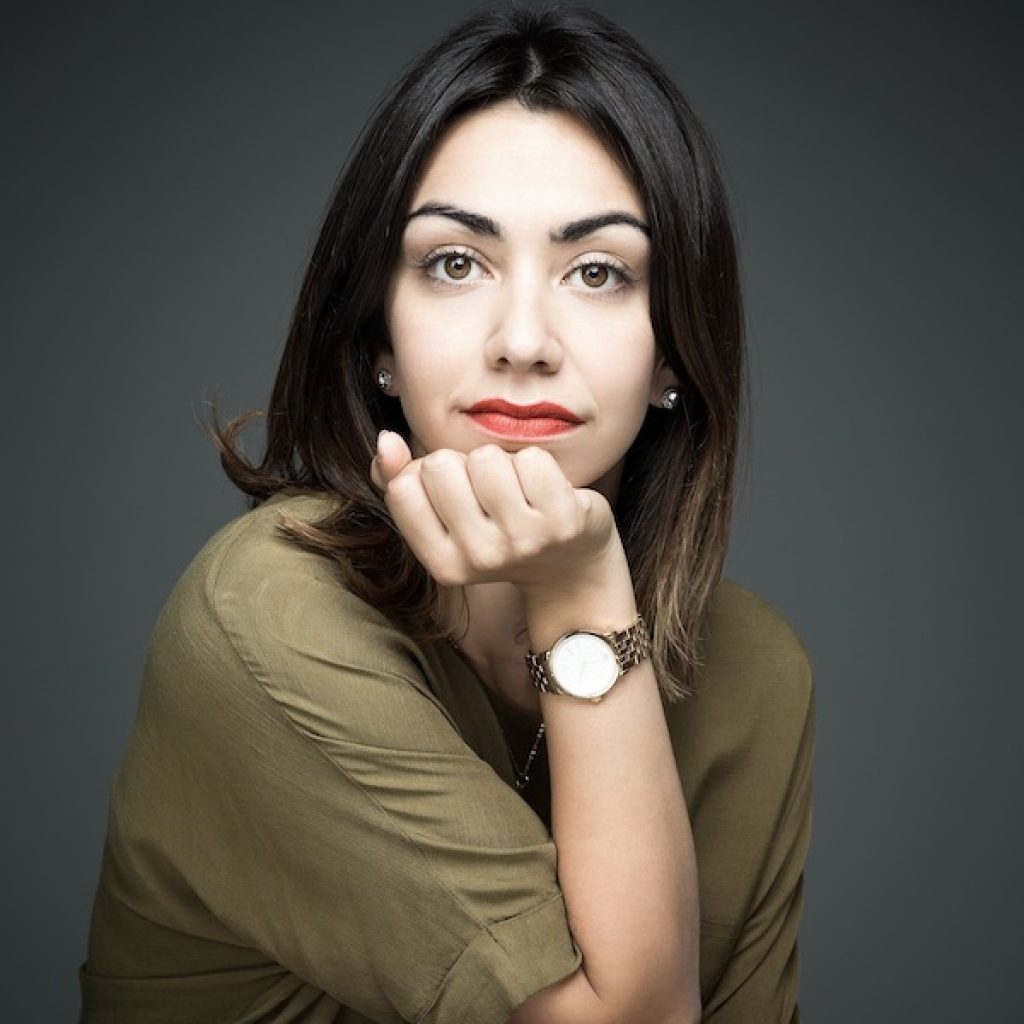 McCurtin believes that as the global market is saturated with commercial fragrances people are increasingly looking for authenticity and artisanship on a scale that is relatable, something that resonates really well with Ireland’s beautiful landscape, strong identity and long history of skilled craftsmanship. ‘I think the fact that we don’t have a historical heritage in perfumery is in many ways an advantage – we are free to embrace it as we see fit and to make it our own.’

Mangan agrees, highlighting that while Ireland is typically not known as a source of ingredients for the perfume industry, that’s not such a bad thing either, as when we are making perfume, we are telling a story, not in a literal sense and we use ingredients to create the narrative.” This said, it is not about being nature identical. Take the fig tree growing on the grounds of a 14th Century monastery on the Corrib River in Galway. “It’s not just about the fig tree, but the ancient monasteries and how they impacted Ireland. This is our heritage and we are acting as a tour guide to our city and culture through perfume. I’m so lucky,’ she concludes. ‘Ireland is such a progressive place to live. We have our own identity. Why go abroad for inspiration when it’s all here now…?’