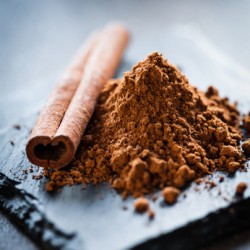 Cinnamon is one of the smells of Christmas:  spicy and enticing, comforting and sweet, all at once.  Our love of cinnamon dates back thousands of years:  2000 years ago the Egyptians were weaving it into perfumes (though it probably originates way before that, in China).

Cinnamomum verum is thought to have been an ingredient in the original holy ‘anointing oil’, mentioned in the Bible. The Greeks and Romans used it too, often with its near-relation cassia.  It’s long been considered to have aphrodisiac properties, when eaten – though if spicy scents turn you on, maybe when dabbed onto pulse-points, too.

Because cinnamon bark oil is a sensitiser – and as such, you may ‘cinnamates’ on perfume packaging, as a warning – where natural cinnamon’s used, it’s likely to have been distilled from the leaves and twigs.  But it’s often also synthesised, adding a spicy warmth to Ambrées (and quite a few men’s scents). Here’s Andy Tauer on the restrictions on using cinnamon, which he shared with The Perfume Society – and why he loves to use it, all the same:

‘Ah… a forbidden fruit, restricted by the EU and IFRA. Sensitising cinnamal, potential allergen. So warm, metallic almost, spicy of course, gourmand, hitting the nose with memories of rice pudding with cinnamon sugar, and making your saliva flow. I love to cook with cinnamon. It brings out the flavors of ginger, onions, adds warmth to the cocktail of exotic flavors from clove, pepper, cumin, fenugreek. In my perfumes, I love it – like a synthetic aldehyde – as it switches the light on, brings out the colours and contrasts. One fine day, in perfumery heaven, we will all smell and enjoy cinnamon in heavy doses: Until then, we have to life with the regulations that we have…’

Categories: Uncategorised
Recommended Posts
RECENT POSTS
CHECK OUT:
LATEST FROM OUR SHOP
Follow By entering your email address you agree our blog partner (BlogLovin) sending you emails with our latest blog. You can always unsubscribe. We do not pass your information to anyone else. See our privacy policy.