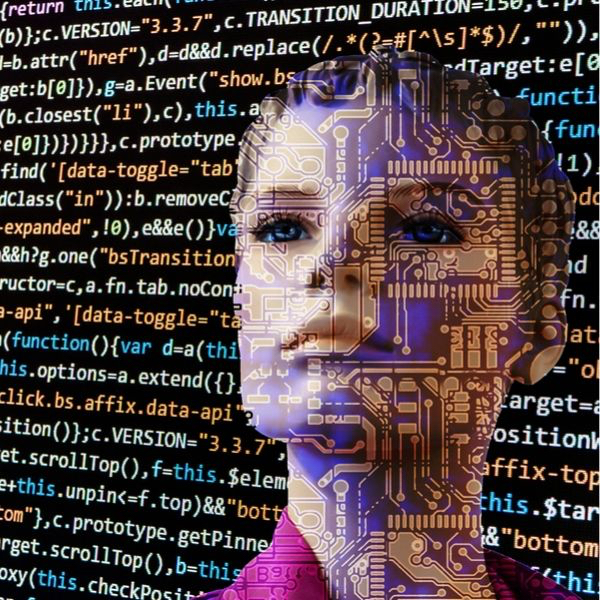 We’re always thrilled to attend the annual IFRA Fragrance Forum – a symposium of scent that delves deeper into current scientific research, bringing together experts from around the world who may never usually meet, but who all share the sense of smell as a common theme of their research. This year, the topic was Scent and Artificial Intelligence – how new technologies are changing the face of of the fragrance industry.

Lisa Hipgrave, Director of IFRA-UK, commented that, ‘We live in a fast-paced world and great strides are being made in new technologies that will affect us in all walks of life. The fragrance industry is no exception to this, which is why we’ve chosen to focus on the relationship between scent and artificial intelligence as this year’s Fragrance Forum theme.’

Spending all day at The Wellcome Collection in London, we listened in awe as the various experts gave back-to-back talks explaining their various areas of research and expertise, and the implications these could have for the future of the fragrance industry. 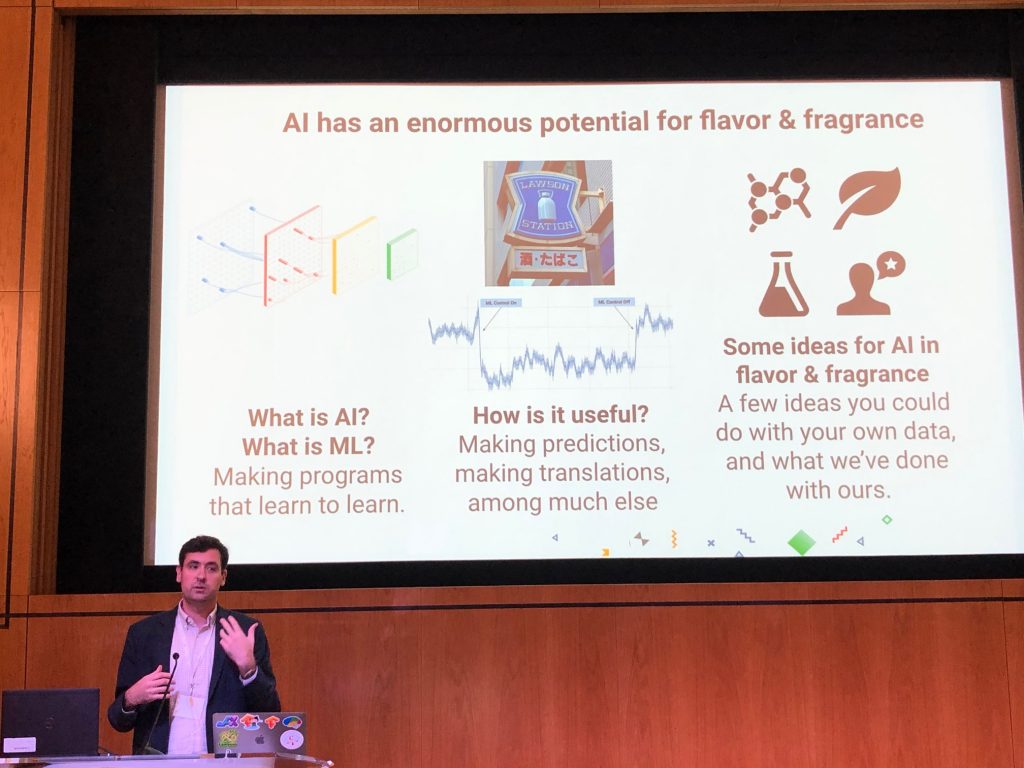 Starting the day was Dr Alex Wiltschko, Senior Research Scientist from Google Brain – a deep learning artificial intelligence research team at Google. He gained his PhD from Harvard Medical School, where he studied Olfactory Neuroscience, and now leads an olfaction-focused machine learning team at Google.  He gave a great explanation of AI and ‘machine learning’, discussing how they can potentially impact fragrance chemistry, by predicting how certain complex molecules will smell (ways to make a rose smell even rosier, for example) by suggesting initial tweaks to formulas, which the perfumer can then perfect.

Professor Thomas Nowotny, Professor of Informatics and Director of Research and Knowledge Exchange from the University of Sussex, then explored what we can learn from the olfactory system of insects. Discussing the progress that’s being made in understanding how we smell (something that still hasn’t, incredibly, been proved), he posited the theory that we can detect odour sources in the same way we can hear the ‘chatter’ at a cocktail party, but naturally block out background noise to hone in on the person we’re having a conversation with. So vision and hearing have a lot more in common with smell that previously assumed. 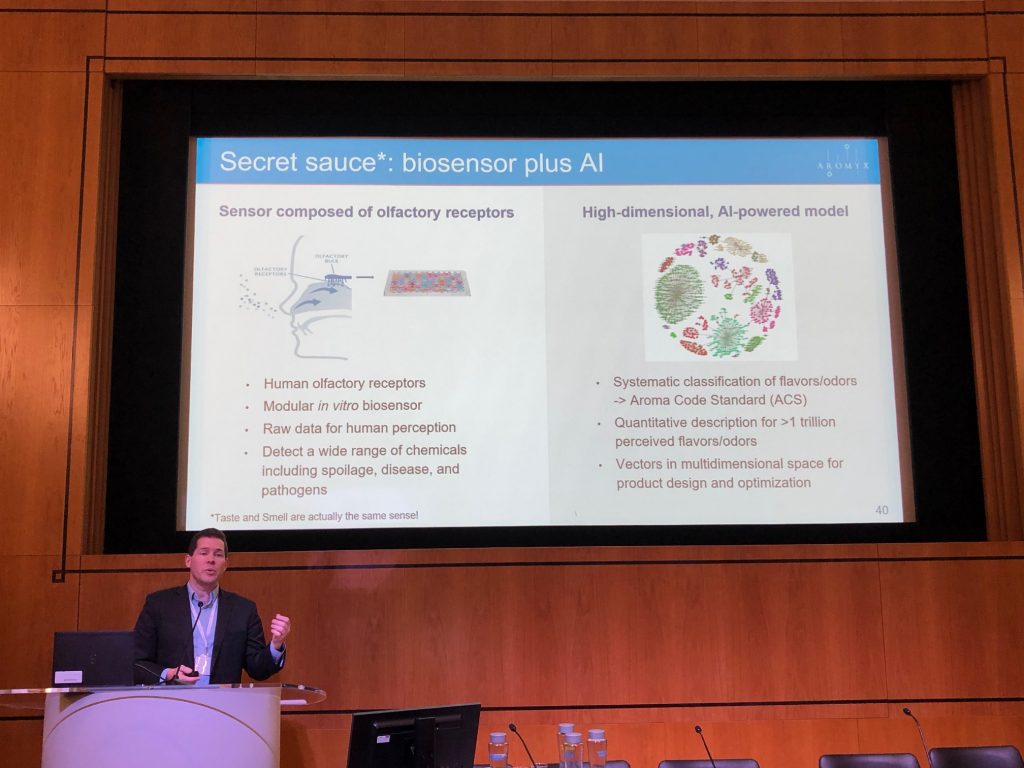 Dr Josh Silverman, CEO of Aromyx, talked about the relationship between biotechnology and AI – in particular how new technologies are ‘solving sensory problems’. He explained how our noses have evolved to to detect vital information about whether a substance is pleasant, toxic, or anything in between, and that we actually smell in ‘something like 10-D’ – far more complex than sight or hearing levels! – and that although 70% of olfactory receptors are shared, a whopping 30% are completely unique to each person – so that’s why some of us adore certain scents (and tastes) and others find them awful! 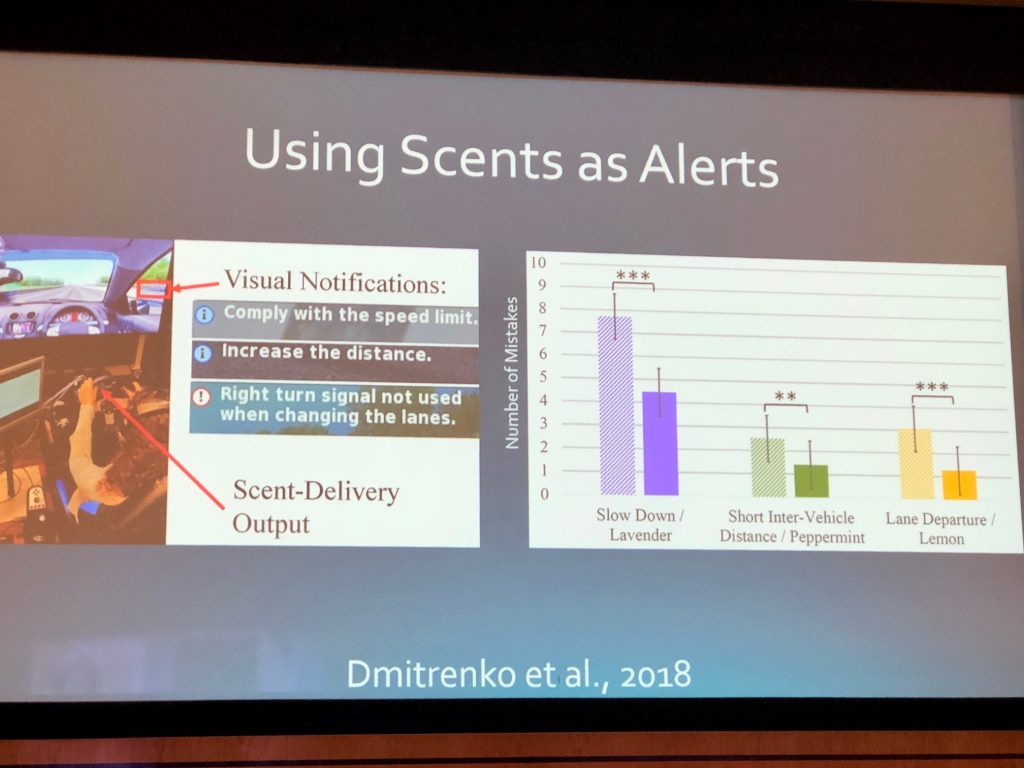 Dr Dmitrijs Dmitrenko, from the Sussex Computer Human (SCHI) Laboratory at the University of Sussex expored scent and self-driving cars, and if it can make them safer, saying that ‘scent diffusers are becoming increasingly popular in modern cars, but their current function does not go beyond the sensory enjoyment.’ His study successfully proved drivers were far more responsive (and drove more safely) when certain smells were briefly puffed into the car to alert potential dangers. Lavender was puffed to tell drivers to slow down, peppermint to warn of being too close and lemon to warn the car was veering out of a lane. 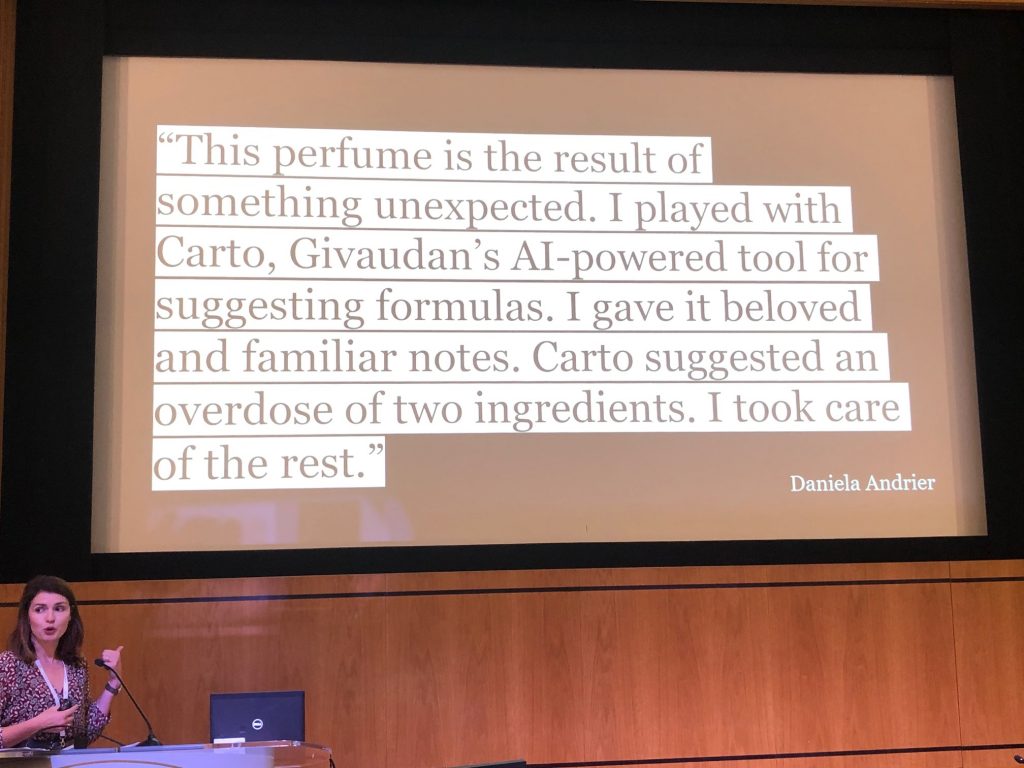 Finally, Valérie Drobac, Digital Innovation Manager from Givaudan (one of the world’s largest fragrance creation houses), talked about their latest intuitive and interactive system, ‘Carto’ – a new system that reinvents the way perfumers create fragrance. Launched in April of this year, ‘Carto is an AI-powered tool that brings science and technology together, to the benefit of perfumers who create Givaudan’s fragrances. The new system is designed to intelligently use Givaudan’s unique ingredients ‘Odour Value Map’ to maximise the olfactive performance in the final fragrance.’ Using the recent Etat Libre d’Orange fragrance She Was An Anomaly as an example, she explained how perfumer Daniela Andrier had been suggested to initial formulas to use, which she then worked on, evaluated and perfected.

So should we be afraid that robots are going to take over from perfumers? Short answer: no.

Wiltschko commented that he ‘couldn’t see how a fragrance could be made without a perfumer’ – because at every stage of these AI innovations, a human is required to design, make and teach them to even perform basic tasks. Where these future technologies will help is in preventing wasted energy – data centres currently consume 3% of all the world’s energy, and that will only increase if systems aren’t put in place to maximise efficency and promote eco-friendly, sustainable ways of working. The AI will be used behind the scenes to free up the perfumers to be even more creative.

And what’s more, as Drobac reminded us – ‘perfumers have already used machines in their daily creative work, for many years…’ to mix initial formulas, for reasons of exact precision. Several of the speakers used the analogy of photography – think about how, when cameras were first invented, people declared this to be the death of Art. Or how, when sound was first introduced to films, or the advent of television, people dismissed them as a petty irrelevance.

The most excting thing we took away from the day of talks was the fact that our sense of smell, and fragrance itself, is finally being taken seriously by the scientific world. And as the Communications Director of IFRA, David O’Leary, said in closing the day: ‘AI is the second Industrial Revolution…’ so we need to take it very seriously.

Categories: Features, Slider, News
Tags: future, perfume, technology, fragrance forum, IFRA, AI, artificial intelligence, robot
Recommended Posts
RECENT POSTS
CHECK OUT:
LATEST FROM OUR SHOP
Follow By entering your email address you agree our blog partner (BlogLovin) sending you emails with our latest blog. You can always unsubscribe. We do not pass your information to anyone else. See our privacy policy.