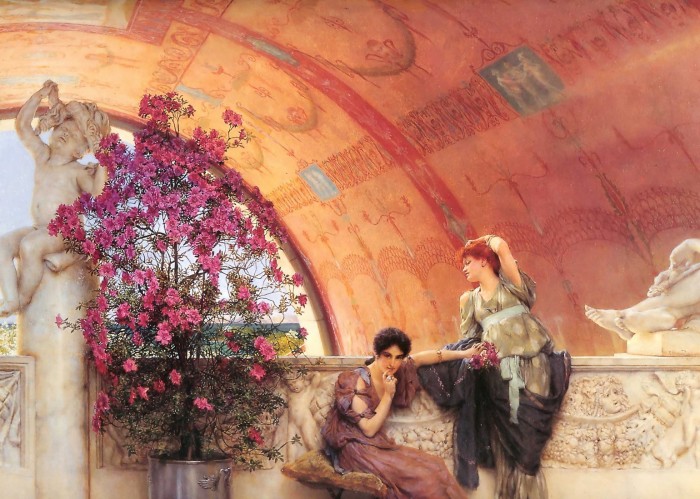 The Romans may not have invented perfumery, but they gave it its name:  per fumum (‘through smoke’).  In an incredibly short space of time (well, less than 1,000 years – the blink of an eye, in history terms), Rome went from a small farming village to global epicenter and undisputed world capital.  And went, too, from austerity to opulence – with perfume playing an important, luxurious role.  Though enduringly used in religious ritual, perfume was also now being used to anoint the body.  Generously.  By the 1st Century AD, Rome used about 2,800 tons of imported frankincense and 550 tons of myrrh a year.)

Public baths were The Big Thing in Ancient Rome, with the affluent classes devoted to body care.  Think:  balms, oils, perfumes for skin, hair – and living spaces.  (Food had to appeal to the nose as well as the palate, too, through spicy aromas.)  Even public spaces might be scented:  Emperor Nero was so crazy about roses, he had silver pipes installed so that his dinner guests could be spritzed with rosewater.  (According to legend, he once shelled out £100,000 for a ‘waterfall’ of rosepetals which actually smothered one guest, killing him.  Quite a way to go.) 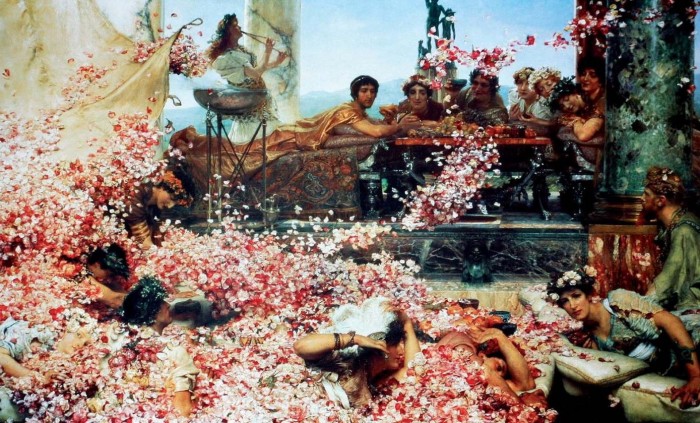 Moralists like Pliny the Elder condemned the excessive use of perfume, for which exquisite glass vessels were hand-blown.  Ironically, in his rant against perfume, Pliny absolutely nails why we so love perfume even to this day:

‘Perfumes serve the purpose of the most superfluous of all forms of luxury;  for pearls and jewels do nevertheless pass to the wearer’s heir, and clothes last for some time, but ingredients lose their scent at once, and die in the very hour when they are used.  Their highest recommendation is that when a woman passes by, her scent may attract the attention even of persons occupied in something else…  All that money is paid for a pleasure enjoyed by someone else, for a person carrying scent about himself does not smell it himself.’  The art of perfumery today ensures that yes, we can smell perfume on ourselves – but its fleeting, ephemeral qualities are partly what make it so uniquely precious and delightful.

But famously, Rome imploded in on itself. The Roman empire didn’t just fall, it crashed.  Decadence did for it.  And pretty much did for the wearing of perfume, in Europe, for a few hundred years.  Incense was still used in churches, and fragrant gardens were cultivated (especially by monks) – but in the Middle Ages, mere wafts of lavender, rosemary, clary sage and rose from cloistered gardens can’t have done much to mask the stench of everyday life.  (No wonder pomanders – a bastardisation of the French, ‘pomme d’ambre’ – became so popular, in the home.)

Read the next chapter in fragrance’s history, here…