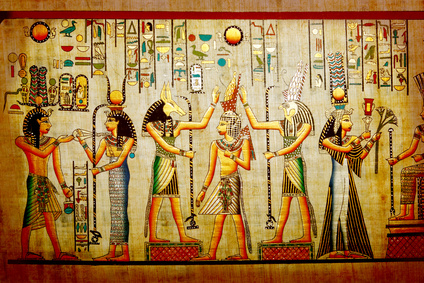 Fragrance has been entrancing and beguiling us for millennia. 5,000 years, at least:  hieroglyphics in Egyptian tombs show that Ancient Egyptians and Mesopotamians were making perfume, as long ago as 3,000 BC.  The first perfumers, Egyptian priests, used aromatic resins to sweeten the smell of sacrificial offerings.  People believed that burning incense connected humans with the Gods – and pleased the deities…

Many of those ingredients are still prized in perfumery today.  Jasmine, hand-picked in the morning.  Frankincense resin, still gathered from the Boswellia shrub, with entire forests cloaking areas of Oman, Yemen, Ethiopia.  (Egyptian Queen Hatsheput was apparently crazy for frankincense:  wall paintings on her temple, showing a large-scale expedition to collect frankincense from the ancient land of Punt.)  They used Nile lotus.  Myrrh.  Madonna lilies.  Honey.

Most mystical of all was the Kyphi incense:  though the recipe varied from temple to temple, each recipe featured 16 ingredients – including myrrh, sweet rush, cupress grass, wine, honey, raisins, resin and juniper, pounded together.  Each night, Kyphi was burned to please (and appease) the Gods, as they began their journey to the underworld, and to ensure the safe return of the sun God, Ra, next morning.  There is even a ‘perfume room’ at Edfu, in Egypt (the best-preserved temple after Karnak), where recipes for ointments, perfumes and inhalations feature in hieroglyphics on the wall.  (A place to add to every perfume-lover’s ‘bucket list’.)

But incense wasn’t just reserved for spiritual rituals:  the Egyptians enjoyed it in daily life (rather as we do scented candles today…)  They already understood that perfumes could help maintain a harmonious balance between body and soul.  Early ‘aromatherapy’, it seems.  They had Megalion, a soothing balm for inflamed skin or burns (and for stomach problems):  blending cardamom and myrrh, it was also worn as a perfume.  Theriaque – blending myrrh, frankincense, cinnamon, balsam, sweet rush and (yes) serpent skin – was used to soothe anxiety.  And if you sniff around Cairo’s Khan al Khalili souk, you’ll still find it today, made up by herbalists. 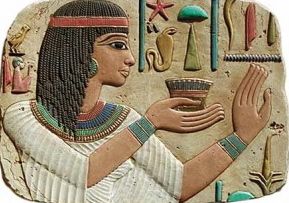 The first actual ‘nose’ on record is actually a woman, meanwhile – a chemist called Tapputi, written of on a tablet from Mesopotamia in the second millennium BC.  (And isn’t Tapputi a name that a perfume house should borrow, for a contemporary scent with meaning…?)  Resins, woods, fir, myrtle were the ingredients Mesopotamians had at their fingertips, to create their incense.  The most precious of all was the Cedar of Lebanon.  In fact, the Akkadian word for incense – ‘lubbunu’ – still echoes in the name Lebanon, today.  (When the Syrian city of Mari was excavated, special rooms devoted to blending perfumes were discovered – with an emphasis on the use of pines and confiers, in particular.)

The Bible, too, has records of the native and imported fragrances which wafted through the near East.  How evocative is this, from the Song of Solomon (4:12-14)?

A garden enclosed is my sister, my spouse;
A spring shut up, a fountain sealed.
Thy plants are an orchard of pomegranates, with pleasant fruits;
Camphire with spikenard, spikenard and saffron;
Calamus and cinnamon with all trees of frankincense;
Myrrh and aloes, with the chief spices.

Amazingly, the first writings about fragrant ingredients date back way, way further – to China, where aromatic products and a description of their uses was recorded as long ago as 4,500 BC. So does perfumery itself go back further even than this…?  It’s hard to believe it doesn’t.  Stone Age man had fire, and could burn fragrant woods.  Scented plants have existed for hundreds of thousands of years (at least).  But until archaeologists dig deeper into perfume history and stumble upon new evidence, we’ve only our imaginations to transport us there…