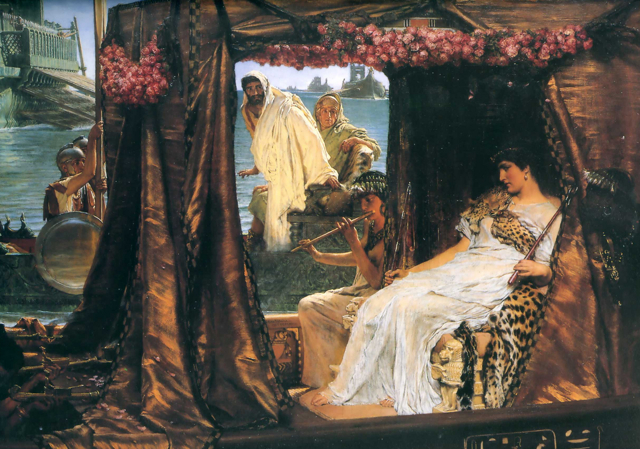 If the art of ancient perfumery was to have a ‘face’, a figurehead, it would surely be Cleopatra.  As legend tells it, she had the the sails of her boat coated with fragrant oils before setting to sea:  ‘The perfumes diffused themselves to the vessel to the shore, which was covered with multitudes.’  Her idea was that Mark Antony would get a waft of her arrival even before he caught sight of her.  As Shakespeare put it:

But imagine trailing in that wake…  So:  Cleopatra used fragrance to seduce Mark Antony (above is Sir Lawrence Alma-Tadema‘s vision of that event) – and women have been doing something similar, for millennia.  Though perhaps not so lavishly:  the floor of Cleopatra’s boudoir was strewn with roses, leading to her bed…

In Greece, meanwhile, perfume was already central to worshipping and pleasing of the gods and goddesses.  The Greeks believed that anything as wondrous must actually have come from the gods:  vast quantities were used in religious ceremonies, and those too poor to afford fragrance for funerals simply painted a perfume bottle on the coffin. 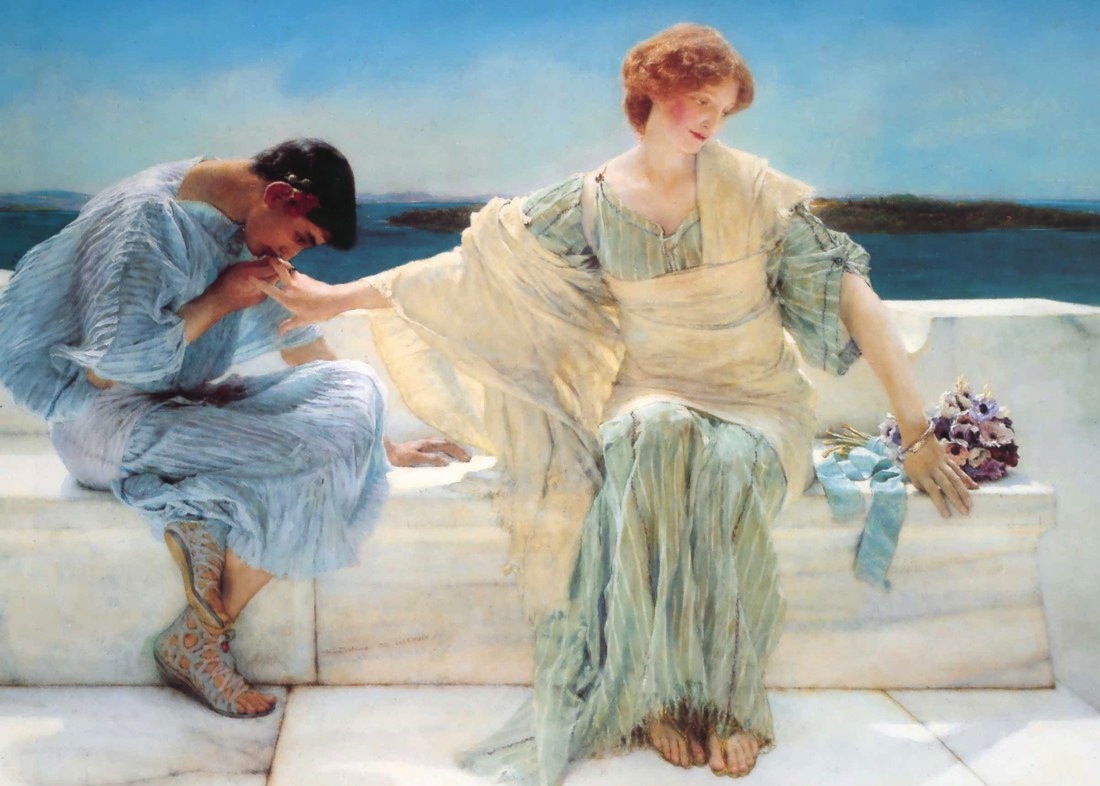 An entire book, ‘Concerning Odours’ – written by Theophrastus, ‘the father of botany’ – was dedicated to fragrance, its pages documenting spikenard, iris, cistus, rose, mint, myrtle, hyacinth, cinnamon and narcissus, among other perfume ingredients.

The Greeks played a crucial role in the development of perfumery.  Not content with burning fragrance ingredients, they ground aromatic plants and resins and suspended them in oil, creating the first perfumes for wearing on the skin.  And what else helped fragrance to ‘catch on’ in Ancient Greece was the new-found interest in hygiene.  (A Greek word, NB.)

Through Alexander the Great’s conquests in the East, spices, incense and new perfume ingredients became available, traded from China, India, Africa, Arabia – as precious as gold, and in equally high demand.

Animal-based scent ingredients – musk, ambergris – were used for the first time, too, adding a a new sensuousness to fragrance creation.  (And staying power, since many animal ingredients are great fixatives).  And no longer was perfume for the exclusive enjoyment of the gods.  Fragrant blends were introduced into everyday life, worn by poets, athletes and gorgeous Grecian women – and the perfume shops which opened all over Athens, showcasing these scents, became centres of gossip, scandal and political intrigue.

Now travel forward in time to Ancient Rome, when fountains flowed with rosewater and fragrance played a central part in Roman pleasures, here…