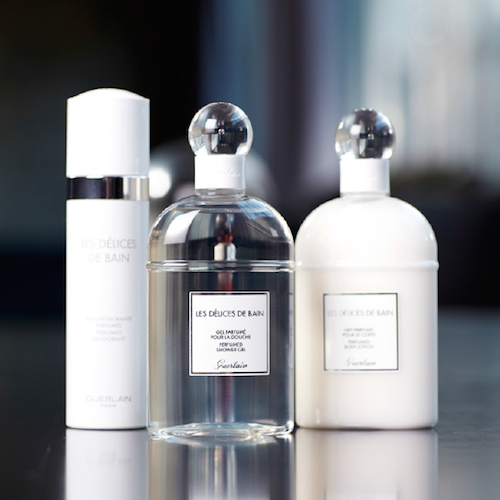 We all know how well fragrance layering works: the idea of using a matching shower gel, body lotion, etc.
Well, now Guerlain have created a scented Shower Gel and Body Lotion that can be layered with not one, not five, but all of their scents.
Indeed, if you’re a lover of all things Guerlain, that may well not be a coincidence, since all their fragrances have a hint of the same base in them. Call it the Guerlain ‘DNA’, if you will: a signature base (sometimes referred to as the ‘Guerlinade’). Jean-Paul Guerlain was once quoted saying, ‘In the same way that you recognize the origin of a great wine, or the composer of a symphony, you perceive the Guerlain stamp which persists even today’.
So now, with the Les Délices de Bain range, you can layer on that ultra-luxurious, lustrous, signature base perfectly, prepping flawlessly for one of their many classic scents.
The basis of this ‘signature’ is a fusion of jasmine, bergamot, rose, orris, tonka bean, gum resins, animalic notes and vanilla – though every time it is used it’s adjusted ever so slightly, a touch more rose here, a smidge less vanilla there, for a unique touch.
The shower gel lathers up to a luscious foam, while the pearly lotion seeps into skin in the sleekest, silkiest fashion, leaving trails of gentle, creamy vanilla, with the lightest accents of orange and faint wisps of musk. Each softens to a hazy honeyed vanilla – somehow evoking the softness of fine 400 thread count sheets along with the chic of a well-dressed Parisian lady. With such a high percentage of perfume in the shower gels and lotion, they feel more akin to perfume in creamy form – and after smoothing onto our skin, the scent lingered for hours after.
We’ve been layering the body lotion with the most recent addition to the Aqua Allegoria range, Pera Granita, and it works like a dream. Accentuating the florals and fruits, it also tones down Pera Granita’s sweetness a little, blending to create a wearable and adjustable scent that will last from daybreak until the moon shimmers in the sky…
Les Délices de Bain Perfumed Shower Gel £35 for 200ml
Les Délices de Bain Perfumed Body Lotion £40 for 200ml
Les Délices de Bain Perfumed Deodorant £34 for 100ml
Find them at John Lewis
By Carson Parkin-Fairley