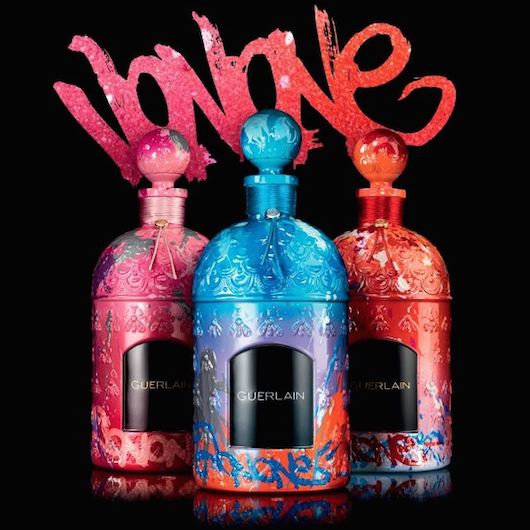 We love a bit of modern art juxtaposed with classic beauty, and what could be be better than the femininely curved, instantly recognisable form of a Guerlain flacon smothered in vibrant splashes of paint? Seriously cool, we’re clicking our fingers and totally digging the vibe of the emblematic  ‘Bee Bottle’ in its new limited edition and fashion- forward wardrobe.

The result of a seemingly most unlikely collaboration between a Harlem graffiti artist and one of the chicest perfume houses in history, we’re presented with three of the most iconic Maison Guerlain fragrances in daringly avant-garde attire – if not a case of the leopard changing its spots, then most certainly of the bee changing its stripes.

Graffiti artist John Andrew Perello – aka ‘Jon One‘ to his friends and contemporaries – was born and grew up in New York, graduating toward the buzzing (sorry) Harlem scene of the 1980s and being lauded as a leader of that street-led, ever-evolving art movement. Moving to Paris in 1987, he made the city not only his playground but also his adopted home. Now let loose by Guerlain to shake up their perfume bottles, it may seem an outlandish marriage of styles but we’re completely smitten with the idea, and totally hankering after a bottle (though it’s lottery-winning territory…) of punk-ified Shalimar!

Guerlain say:
‘In this collaboration, the Maison Guerlain has offered Jon One its one-litre Bee Bottle as a canvas for expression. The result: three emblematic fragrances, three worlds of colour that directly evoke the emotion, the raw materials and the personality of each composition. Created in the artist’s atelier in Paris, each bottle is unique, a veritable marvel of abstraction and energy created individually and signed by JonOne. The bottles, inscribed with the Guerlain name, are still adorned by the “Dames de Table” with a satin ribbon around the neck – in the pure tradition of the Maison Guerlain – before being slipped into a collector’s case signed by the artist.’ 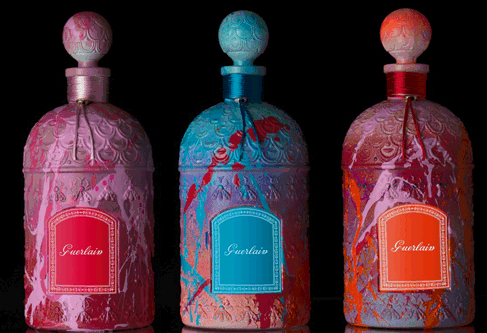