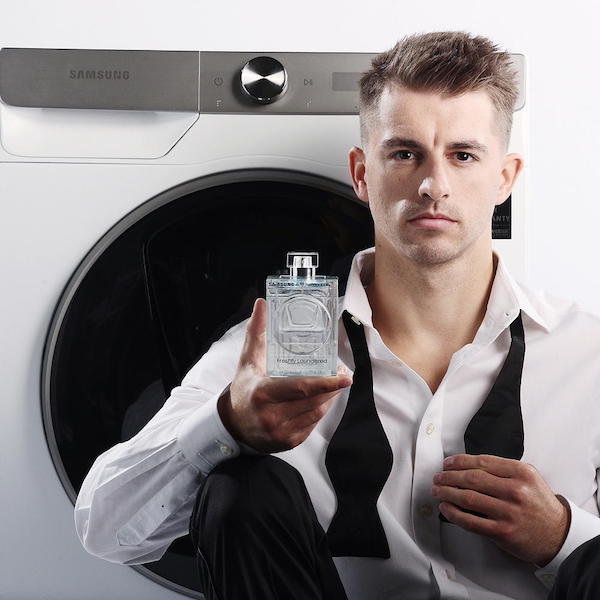 The smell of fresh laundry regularly tops the lists of people’s favourite smells, and recently, 4160 Tuesdays founder and perfumer, Sarah McCartney, was asked to create a fragrance for Samsung, for which they produced a series of spoof ads starring Olympic gold medallist, Max Whitlock.

Samsung questioned 2000 British adults to reveal the nation’s favourite smells. The results, they announced, ‘…positioned fresh laundry at the top of the pile, closely followed by clean bedsheets, cakes baking in the oven, the seaside air and freshly cut grass.’

The new ‘Freshly Laundered – Eco Edition’ fragrance was recently made available to customers who purchased a new ecobubbleTM washing machine from Samsung KX, an experience space in Coal Drops Yard, King’s Cross. But what is it, exactly, that makes us love the smell of fresh laundry so much?

It’s a question that continues to provoke much research, the answer being worth billions – not only in the ‘functional fragrance’ market, but worked into many fine fragrances, home scents and body care products. Earlier this year, we reported on a scientific study that finally revealed exactly what makes fresh laundry smell so good; and out of three possible options Sarah McCartney presented to them, the final fragrance Samsung chose contained, ‘… four musks which evoke the smell of a fresh garden and fresh water, paired with aromas of lily of the valley.’

The series of adverts for the perfume put an amusing ‘spin’ (sorry, couldn’t resist) on classic fragrance ads, by paying reference to some famous examples. Says Samsung:

‘The launch video pays homage to Brad Pitt’s infamous commercials for Chanel No.5 – with our greatest young Olympian in philosophical and moody mode as he ponders the mysteries of life and laundry. The Team GB Olympian sends up some of the industry’s clichés by seductively running his hand over the edge of a washing machine and spraying himself with perfume before sniffing a Union Jack flag. Max can also be seen putting his spin on well-loved and celebrated ads such as Dolce & Gabbana’s Light Blue commercial (originally starring David Gandy) and Versace’s 2014 advert for Eros.’

While you can’t go out and buy the Samsung Freshly Laundered fragrance separately, it’s fascinating to see that we still cling to familiar scents – perhaps moreso now than ever, in these troubled times – when asked about our favourite smells. How many, from the official list, would make your personal list…?

Categories: Slider, News
Tags: fragrance, perfume, scent, Sarah McCartney, 4160 Tuesdays, laundry, Samsung, washing machine, Freshly Laundered
Recommended Posts
RECENT POSTS
CHECK OUT:
LATEST FROM OUR SHOP
Follow By entering your email address you agree our blog partner (BlogLovin) sending you emails with our latest blog. You can always unsubscribe. We do not pass your information to anyone else. See our privacy policy.