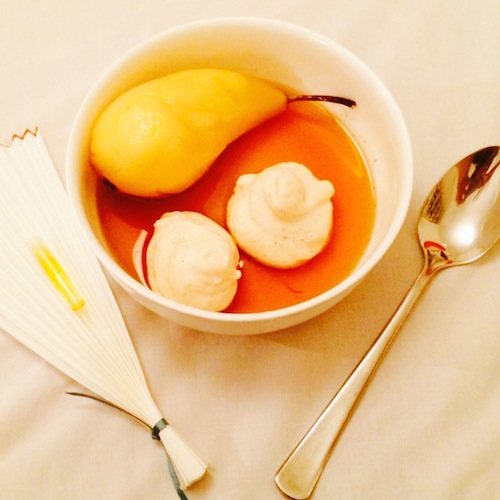 It’s often said that we ‘eat with our eyes’, but a far truer statement would be to say that we eat with our noses. Anyone of our VIP Subscribers who’ve attended one of our popular How to Improve Your Sense of Smell Workshops will attest to the strange sensation of holding your nose before putting a square of spiced chocolate in your mouth and chewing – you get a vague feeling of sweetness and texture but little else. On releasing your nose and putting the nostrils back into action, your mouth suddenly floods with flavour – proof that our sense of smell has a huge impact on what and how we actually taste food. 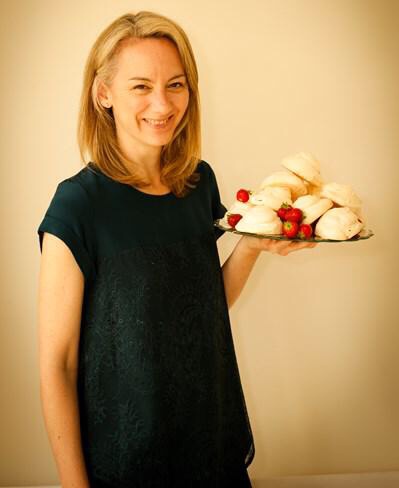 Imagine our delight when we discovered that bespoke perfumer Louise Bloor held evenings combining two of our favourite things – eating and sniffing – at occasional gatherings in her home which she has called The Fragrant Supper Club. Surely a match made in heaven for The Perfume Society? And so it was we came to Dalston, intrigued by the concept of a menu built around fragrant notes, and ready to engage all our senses in the name of research…

Speaking to Louise beforehand, she told us a bit about how she came up with the concept themed around the fragrance of the food as much as the taste.

Louise Bloor: ‘I started the Fragrant Supper Club because I love perfume and cooking, and I found that my perfume work was beginning to spill over into the way I cook. So if I was working on a perfume featuring geranium and lime, I found myself wanting to experiment with that combination in food as well. I’d be making geranium and lime sorbet, jasmine meringues, bergamot vinaigrette, pine needle and juniper infused salmon. It wasn’t until I went to my first supper club in Hackney that I thought perhaps I could start my own. I’ve now been running the club four years – it’s been really popular and great fun and I’ve been able to explore all kinds of ideas around food and fragrance!

I’ve gone on to work with companies like Pernod Ricard, Magnum ice cream and Dunhill on food and fragrance and I’ve hosted events for companies like Google and Microsoft. I still make bespoke perfume for individual clients but alot of my time is taken up with food these days.

The dishes I create tend to start with a fragrance in mind, so I might be thinking about cedarwood and how that could work with, for example, fish and then I’ll go from there. I then try to think about what’s seasonal and how it could work as part of a balanced menu of five courses. The planning is often the hardest part – once I’ve got a menu written out, the cooking is the fun bit.’

On arrival we were shown into Louise’s light, airy flat which had been transformed into a dining experience, with two large tables immaculately set with white tablecloths and cutlery. Our fellow diners arrived, sitting wherever we pleased – some people in groups of four or more, some in groups of two (though often people come alone, too, the better to meet new people and share the experience), and the first of the five (FIVE!) courses was presented to us: chargrilled chicory drizzled with thyme honey and flowers, served with mozzarella and mint. The scent of the infused honey wafted to our noses before we even tasted the food, and the balance of flavours proved to be perfectly judged. 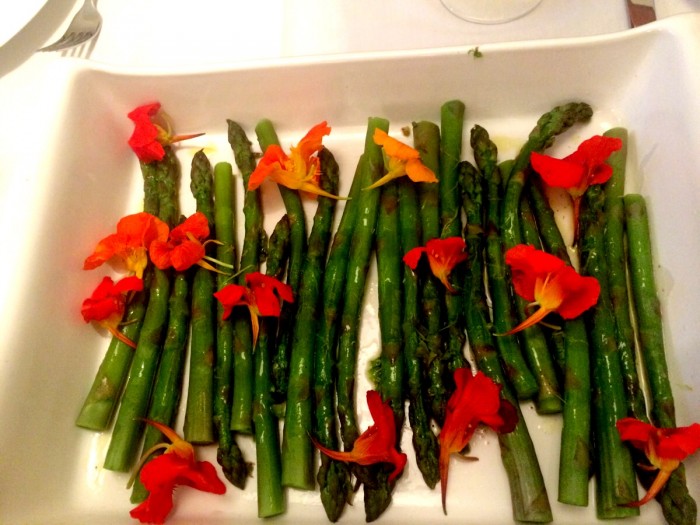 The four courses that followed took us on a culinary and olfactory tour though asparagus with (edible, not just for prettiness) nasturtium flowers; a delicately spiced trout ‘en papillote’; a rose and pink pepper ice cream and – finally – poached pears with nutty meringues and a maple poaching sauce.

The atmosphere was immediately relaxed, with all the guests around the tables chattering away, talking about the food and concentrating on smelling what we were eating truly intensified the flavours and meant you really focused on the food rather than simply guzzling away. Halfway through, we were each presented with a paper fan, the edges of which had been dipped in black coffee – an homage to the tradition some perfumers recommend, of refreshing your nostrils by smelling coffee beans in between experiencing new scents to sniff.

The perfume theme really came into its own, though, while eating the ice cream. Each guest was given a vial of oil Louise had created especially for the evening, and linked to the menu – this one being a blend encompassing rose oil and pink pepper.
Instructed to dab some of this on the thumb of the hand we eat with – every time you lifted the spoon to your lips, you were greeted with a further wash of the delicious smells.

This really worked – we tested eating the ice cream with the other (un-fragranced) hand, and the flavours we tasted seemed far less intense. Such a unique way of experiencing perfume and flavour at the same time! 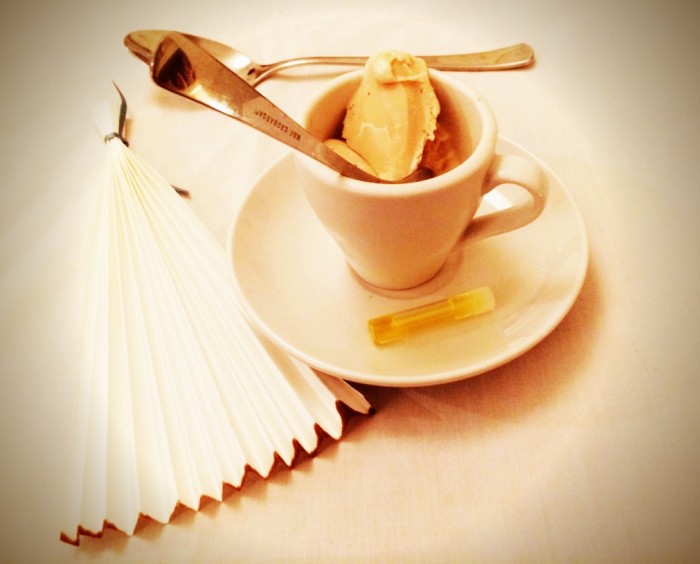 Always a fan of ‘gourmand’ perfumes, this was a very literal way of having your cake (well, ice cream) and sniffing it, too. We left feeling rather full – not being able to resist the offer of ‘a few more meringues’ – and very excited indeed about the idea of this fragrant way of feasting. In fact, we foresee the possibility of a combined Perfume Society and Fragrant Supper evening for our VIP Subscribers in the future, so having whetted your appetite, watch this space, food and fragrance fans…