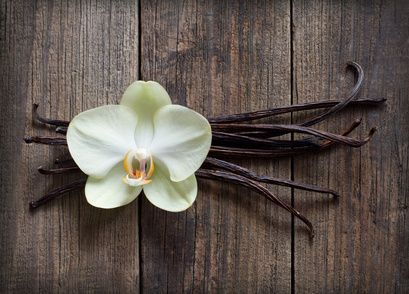 Vanilla doesn’t just smell sweet, nuzzleable and delectably comforting:  it’s kind of magic, in flavour and perfume terms. When we smell or taste anything, our ‘receptors’ constantly wipe those fleeting encounters to prepare for the next flavour or a smell.  But when vanilla is added to food or fragrance, naturally-present vanillin (and other vanilloids, which we’ll talk about in a moment) work to ‘hold open’ our vanilloid receptors, slowing down this wiping process – which in turn gives us more time to perceive, experience and enjoy both scents and flavours. (Vanilloids are also found in cocoa, allspice, cinnamon, cloves, ginger and hot peppers – which partly explains why they’re all such ‘taste sensations’.)

We love this legend about vanilla which we found on the excellent Perfume Shrine blog. ‘According to the Australian Orchid Society, "Old Totonac lore has it that Xanat, the young daughter of the Mexican fertility goddess, loved a Totonac youth. Unable to marry him due to her divine nature, she transformed herself into a plant that would provide pleasure and happiness – that plant was the Vanilla vine. This reputation was much enhanced in 1762 when a German study found that a medication based on vanilla extract cured impotence — all 342 smiling subjects claimed they were cured.”’

Vanilla’s reputation as a powerful aphrodisiac endures, and it’s often present in ‘sexy’, come-hither fragrances, especially Ambrées and gourmand fragrances, as well as ‘girly’, ‘younger’ creations.  And it’s probably one of the most easily-recognised perfume ingredients of all… 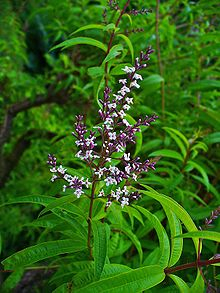 Have you ever enjoyed fresh lemon verbena tea?  We think there’s no more refreshing drink on the planet.  The leaves of this flowering plant – which can grow to two or three metres – are deliciously lemony and fresh when rubbed, and give a cleanness and ‘uplifting’ freshness to scents.  It’s the long leaves which are prized, rather than the tiny (and fleeting) white flowers.  (Not to be confused, incidentally, with the type of verbena grown in Britain, which has no value in perfumery.) 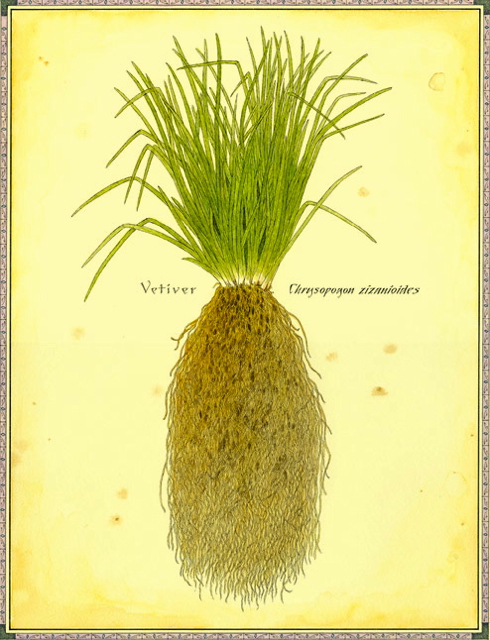 ‘A sack of potatoes’.  That’s what legendary ‘nose’ Jean Kerléo told our Perfume Society co-founder Jo Fairley to close her eyes and think of, when smelling vetiver from a perfumer’s vial.  And it’s so true:  earthy, damp, woodsy and smoky all at the same time.  Just like a hessian sack of potatoes that’s been left at the back of your grandfather’s shed, when you peel back the drawstring and b-r-e-a-t-h-e, actually.

It’s almost impossible to believe, actually, that this grounding, dry smell comes from the roots of a perennial grass – also known as Khus-khus grass - rather than a wood. Vetiveria zizanoides grows like crazy in marshy places and riverbanks in places that are drenched by high annual rainfall:  countries like India, Brazil, Malaysia and the West Indies (Haitian vetiver is probably the most famous of its type).  In some hot places, vetiver is woven into blinds and matting, which are not only wonderfully fragrant as the breeze wafts through them or they’re trodden underfoot:  vetiver has cooling properties.

Used in perfumes since ancient times, vetiver’s more popular than ever and features very, very widely in the base of fragrances because it works brilliantly as a ‘fixative’ – and so far, nobody seems to have come up with a satisfactory synthetic alternative.

PS A relative of vetiver, Vetiveria nigritina, is also found in the Saharan areas of Africa, and is used to perfume clothes and fabrics – but it doesn’t make its way into the perfumes we wear. 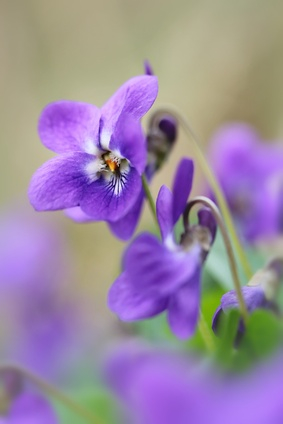 Ah, sweet violets.  Dainty little sweet-scented purple flowers.  Flower of fertility, in ancient times – and a cure, too:  garlands of violets worn around the head were thought to prevent headaches and dizziness, while in ancient Athens, they drank wine scented with violets.

But although violet has been giving up its sweetness to perfumers since the time of early Arab perfumers, who perfected a technique for distilling the oil, it was Empress Marie Louise Bonaparte who really put Viola odorata on the scent-map, establishing the violet industry in Parma which thrives to this day.  Violets were Napoleon’s favourite flowers.

Violet flowers smell soft, powdery and romantic, a little like iris, and are can be played up to create a very feminine fragrance.  (For more about violet leaf, though, which smells green and aquatic, click here.)  Chances are, though, that the violet in your own perfume – and it probably is in your perfume, even if you can’t pick it out – is synthetic:  the chemists Tiemann & Kruger as long ago as 1893 found a way to separate the aroma compounds in violets, which are known as ionones.  Ionones and methyl ionones have been worked into almost every perfume worn today, and include methyl alpha ionone, which has gorgeous hints of raspberry and woods.

Perfumers have to use ionones with a light touch, though:  they can actually ‘desensitise’ the nose. We like this comment from Perfume Shrine, a great scent blog:  ‘When people complain “I can’t smell a thing!”, it’s not necessarily anosmia, but too much ionones!’ 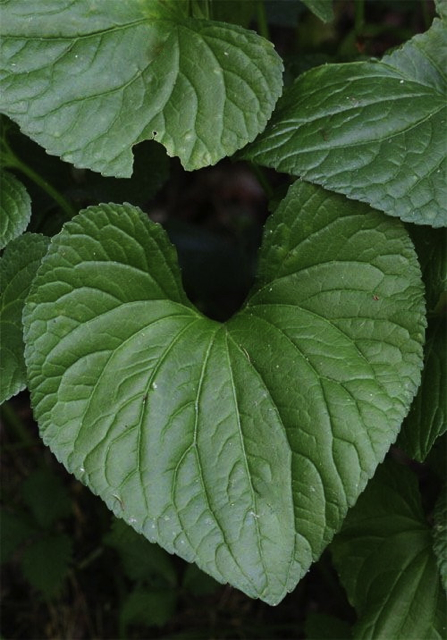 Violet leaves smell quite different to the flower which emerges later.  Almost cool-as-a-cucumber, a touch metallic - yet fresh and new-mown-grass-y at the same time.  Unlike the flowers, which add a powdery touch to scents, violet leaf smells very ‘green’ – and works best in watery fragrances and masculine scents, especially in the fougère family.  Sometimes, though, both the violet leaf and the flower are used together, for a ‘cool’ contemporary violet effect, taking the edge off violet’s slightly great-auntishly old-fashioned powderiness.