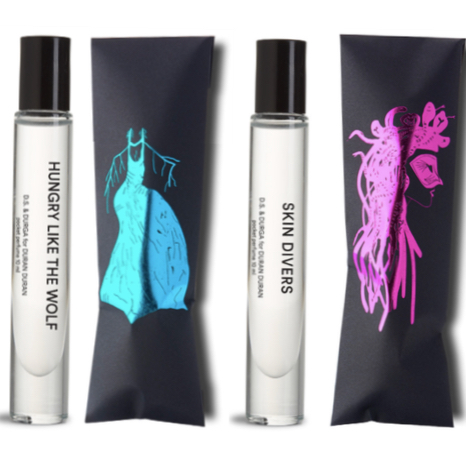 What does Simon Le Bon’s wrist smell like? We can tell you. Because that’s how up-close-and-personal we got to the Duran Duran frontman at the launch this week of a very, very limited edition collaboration with Brooklyn-based rising scent stars, D.S. & Durga.

When one of the world’s best-loved bands teams up with the coolest and grooviest of names in the perfume world, this definitely isn’t going to be another ‘celebrity scent’. The collaboration came about because the band’s manager, Wendy, was a D.S. & Durga fan. When the idea was floated of doing a fragrance to mark the group’s 40 years at the forefront of popular music – yup, you read that right, 40 years – she approached D.S. & Durga founder David Seth Moltz, who’d just created HYLNDSm a peat-y, oak-y masterpiece as a tribute to Glenlivet, and who’s the (self-taught) perfumer in the brand, working alongside his dynamic architect-trained wife, business dynamo Kavi.

There are four fragrances, and just 500 units of each – exclusive to Liberty, where D.S. & Durga are one of the ‘hot’ fragrance brands. All four members of Duran Duran were at the launch party, but it was Simon – a self-confessed perfume-lover – who was involved in the fragrance creation, while Nick Rhodes created the eye-catching outer packaging designs. The fragrances themselves, meanwhile, are perfume oils – and last a phenomenally long time on the skin. Among the ingredients are synthetics from perfume supplier Firmenich which David has begun to work with, having previously worked with Robertet, the naturals specialists.

‘Simon came to my studio two or three times, and brought a bunch of stuff he liked,’ explains the perfumer, who’s also a musician himself. ‘The idea was to create four fragrances, one from each decade of the band’s history. There was a back and forth process, as with any scent creation. Simon has a very good nose and knows what he likes – he’d been making his own stuff for a while and had always wanted to create a fragrance. It’s my thing to want to translate other disciplines into perfumes, so it was a dream project for me.’ (Simon’s favourite ‘real-world’ smell, as he told Liberty, ‘is the smell that comes up from warm stone when the first drops of summer rain fall on it. There is a word for it – petrichor – Robert Harris mentions it in his novel Pompeii. David  and I talked about it.’

A song was chosen to represent each decade – but it had to translate, story-wise, into a fragrance. I’d have loved to do “Girls On Film”,’ continues David, ‘with maybe a scent of celluloid in there, somewhere – but we knew it really, really had to be “Hungry Like The Wolf”, so that killed the 80s…’

Comments Simon Le Bon: ‘I just didn’t want to smell like every body else… The collection we came up with is four very different new scents which are brave, original, cut to the heart and ring like glass. I love every one of them.’ At the launch, we captured a snipped of what Simon had to say about the collection…

The four fragrances are as follows…

HUNGRY LIKE THE WOLF (1982)
Notes include: cade, Atlas cedar, sandalwood, patchouli, leather. ‘I insisted on this song from the 80’s (although there were so many that would have worked!) The fragrance is animalic and captures some of the scenes in the video – the market, the jungle at night. It is furry, wolfy and badass!’

YOU KILL ME WITH SILENCE (2015)
Notes include: cistus, ice, incense and smoke.

And which did Simon’s wrist smell of…? You got it – HUNGRY LIKE THE WOLF, all smoke and earth and deep, dark naughtiness.

And this line-up – destined to be a hot seller among perfumistas and Duran Duran fans alike – is as rock ‘n’ roll as fragrance gets.

The Duran Duran Fragrance Collection from D.S. & Durga £75 each at Liberty