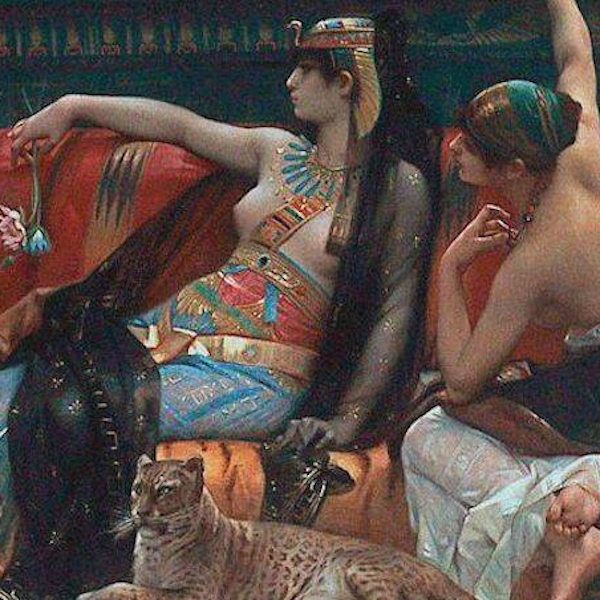 Imagine being able to smell Cleopatra’s actual perfume – time travelling through the sense of smell. Well, thanks to the work of historians, now perhaps you can…

If the art of ancient perfumery was to have a ‘face’, a fragrant figurehead, it would surely be Cleopatra.  As legend tells it, she had the the sails of her boat coated with fragrant oils before setting to sea:  ‘The perfumes diffused themselves to the vessel to the shore, which was covered with multitudes.’  Her idea was that Mark Antony would get a waft of her arrival even before he caught sight of her.  Suffice to say: she wasn’t shy about scent.

Cleopatra reportedly used fragrance to seduce Mark Antony, with even the floor of her boudoir strewn with roses – some say ankle deep in them – leading a scented trail to her bed. Clearly a believer in ‘more is more’.

As Shakespeare put it:

Robert Littman and Jay Silverstein of the University of Hawai’i at Mānoa have been investigating the perfumes of the ancient world for years, with the focus of their research the scent that Cleopatra herself might have worn. The fragrant journey began with the discovery of an ancient Egyprian perfume ‘factory’, at the Tell Timai excavation project at the site of the ancient Egyptian city of Thmuis, founded in 4,500 B.C.

Subsequent excavation at the site revealed kilns dating from the third century B.C. used to produce perfume bottles during both the pre-Roman period and the Roman occupation period. They also uncovered original amphorae with residual evidence of the ingredients used to make the perfumes _ the first time they have been uncovered in over 2,000 years. And although the ingredients no longer retained their smell, chemical analysis revealed exactly what they were…

Myrrh, olive oil, cinnamon, and cardamom formed the basis of the scent, and it would have been worn as a thick, resinious oil. Although it was first discoevered in 2015, it’s not until now the fragrance has been recreated, leading one of the di’s leaders, Robert Littman from the University of Hawaiʻi at Manoa, Littman to comment: ‘What a thrill it is to smell a perfume that no one has smelled for 2,000 years and one which Cleopatra might have worn.’

Littman also, rather tellingly, claimed the scent found at the factory would have been ‘the Chanel No.5 of ancient Egypt.’ And we must wonder if, in fact, the Queen of Egypt would have worn a fragrance produced en-masse in a factory. Indeed, perfumer Mandy Aftel, who has researched the subject significantly, claims that ‘Cleopatra made perfume herself in a personal workshop,’ said Aftel, going on to explain that ‘People have tried to recreate her perfume, but I don’t think anybody knows for sure what she used.’

Well, although we wont get to know exactly what Cleopatra’s favourite fragrance was, but it’s perhaps likely members of her inner circle and the royal court wore the recreated scent; and at least we know the materials they favoured. Until then, we suggest you create your own scented trail. And if not exactly covering your bedroom floor in rose petals and scenting ship’s sails – maybe adding a few extra spritzes, just to be sure…

The perfume based on finding from the Tell-El Timai dig is on display at the Queens of Egypt exhibition by the National Geographic Society in Washington, DC until September 15.

Categories: Features, Slider, News
Tags: fragrance, perfume, scent, history, museum, Egypt, Mandy Aftel, Cleopatra
Recommended Posts
RECENT POSTS
CHECK OUT:
LATEST FROM OUR SHOP
Follow By entering your email address you agree our blog partner (BlogLovin) sending you emails with our latest blog. You can always unsubscribe. We do not pass your information to anyone else. See our privacy policy.